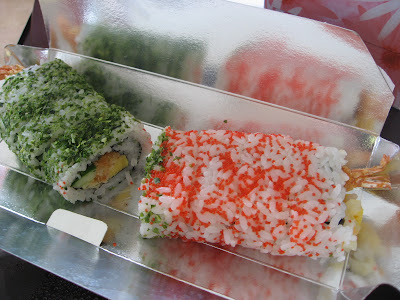 It looked promising. The packaging for to-go was pretty. But the taste... bleech.

Who puts ginger inside a tempura shrimp roll (NT$300+)? Who wants to eat unagi don (NT$500+) where the eel's bone are prickly rather than cooked until soft? I certainly don't. 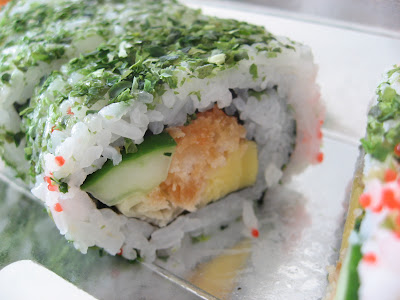 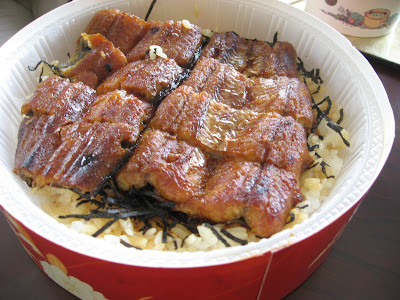 While this Japanese eatery seemed semi-upscale and good for family sit down dinners, next to the popular tonkatsu place Saboten and a Korean bbq restaurant I want to try- our to-go experience left me hungry for something else. 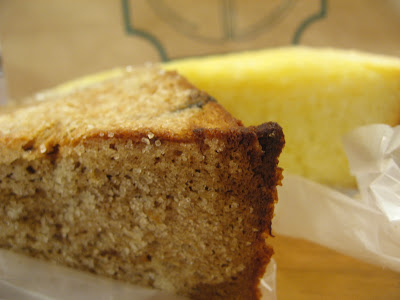 Kid friendliness: don't let the grabby kids wander here unless you are keeping an eye on them or are willing to take home a lot of doughnuts. everything is out in the open and at kid-eye level.

All the random bake shops across town are great for picking up a quick snack, but not so great for avoiding carbs. Oh well, right? As long as the taste is worth it.

Johan is seemingly a Japanese owned French inspired/styled bakery... couldn't find much info about it online other than the Japanese website. 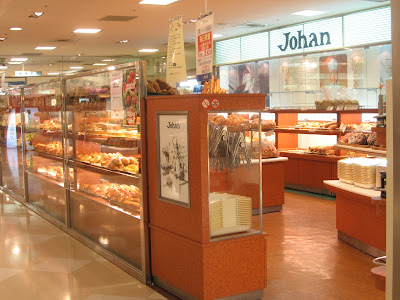 There are two shops I've been to in the different A4 and A5 basements of Shin Kong Mitsukoshi which both have various sweet and salty breads including doughnuts and deep fried breads with curry inside, featuring the top 5 (of the day? of all time?) in the center. 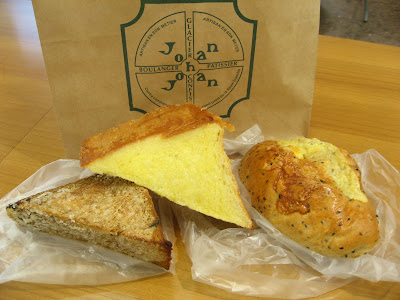 All the signs are in Chinese with no English in site, so you have to identify by guessing with your gut or trying to make out the Chinese. A few months ago I picked up two HUGE pieces of toast- one with coffee flavor and one with butter and sugar, as well as a roll of sesame bread with cheese. 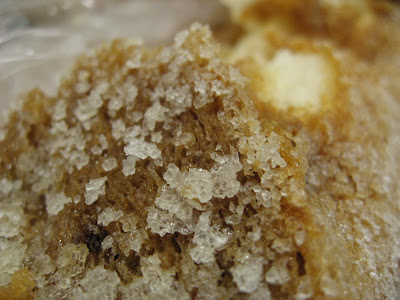 As you can see close up, there was a thin coating of sugar which with the crust made a sweet and toasted crust for the soft inside. I thought I would like the butter and sugar one more, but I ended up inhaling the coffee toast. I tore off a bite and keep tearing off another bite until it was all gone... in like 1 minute. It was scary.

I went back yesterday to buy some more, but it was in the later end of the day and they were sold out. Plenty of butter and sugar toast left, but it was too much butter for me. The coffee toast is way better- it's as if someone has dipped the toast in coffee but it's not soggy!

Yesterday I also got a chocolate bread roll (NT$30), which is featured on their website.

It looks like mini white bread roll marblized with chocolate and looks very sweet, but the flavor is actually not overwhelming and addicting with the faint chocolate notes.

You might also spot a huge line during certain times of the day when their freshly baked french bread comes out- it's so huge it takes a couple people to carry it out, but then you can buy a slice to take home. I've never been patient enough to wait in the line, but maybe one of these days.

As with any freshly baked goods, you want to eat it within a day or so. The sugar on the butter toast got soft after that day and I lost interest in it. My cheese bread went soft the next day, which I didn't like, but was saved with the toaster. The chocolate bread was good for a few days as well. There's new bread everyday so it's better to just buy a little and go back for fresh refills!
Posted by joanh at 11:18 AM 10 comments: 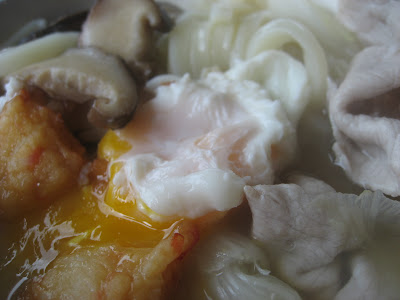 Udon is one of those things that I don't like to order in restaurants because I feel like I could make it better the way I like it at home. Especially when I'm paying US$7 or something like that for a bowl of noodles. Same goes for ramen. Or hotpot in LA which can go up to $15-20 and pretty much includes all the things that I like in my udon.

And it's so easy!

But what's great is that I found really fresh tasting "QQ" udon! Once you taste chewy al dente style udon, you won't want to eat the soggy, soft udon again. I picked some up at the new green Sogo (Zhong Xiao - Fu Xing MRT) after getting suckered by the freeee samples they were handing out. I think part of the key to making really chewy udon is to (1) buy the frozen kind and (2) don't boil it for too long. It's already cooked, so you just have to cook it for a minute or so. 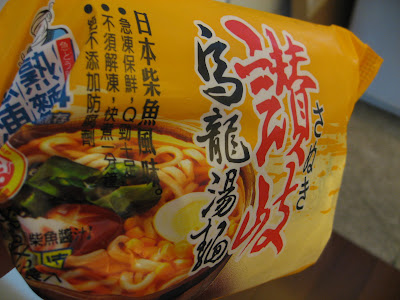 This is their house brand and comes with three udon blocks in one pack with or without packet for broth flavoring. 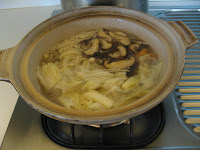 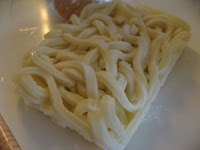 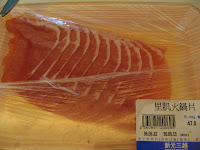 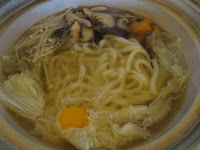 My perfect bowl of noodles has chinese cabbage, mushrooms (shiitake and golden), tempura, thin slices of pork or beef, light seasoning in the broth and an egg with runny yolk. 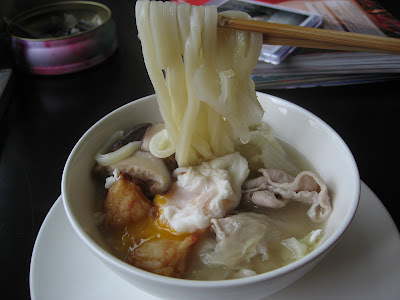 Email ThisBlogThis!Share to TwitterShare to FacebookShare to Pinterest
Labels: my kitchen