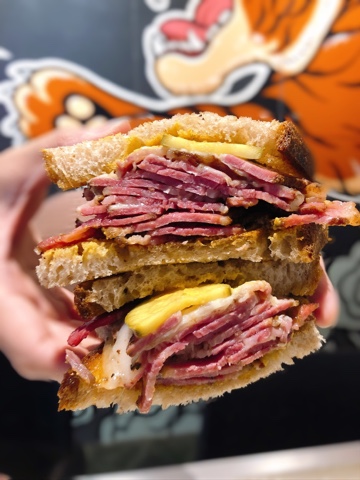 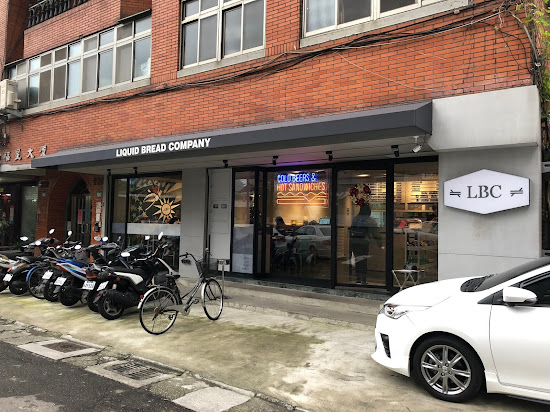 [TAIPEI- XINYI] SO MUCH HAS CHANGED SINCE I STARTED BLOGGING 12 years ago. I used to take photos with my pocket Canon, upload them to my laptop and then upload to blogger and then tinker around with the html, type and post. But now even though taking and editing beautiful photos is easier and faster, it hasn't made blogging any easier.

The app I used to use "Blogger" has slowed down as iPhones got faster and is now no longer in the app store. But then the blogger app started to upload the photos in a lower resolution sometimes AND crashed when I type more than a few letters. But since the app is no longer in the app store, it longer has any technical support and I couldn't download it to my new phone. So in order to upload pics from my new phone to my old phone, I had to airdrop them.That's why I was posting so infrequently on the blog because it would take FOREVER to do.

BUT today I had an epiphany. I could airdrop photos to my desktop (because my laptop's hard drive is full as is my iCloud) and then do it the old school way, upload to blogger and type and post from there. 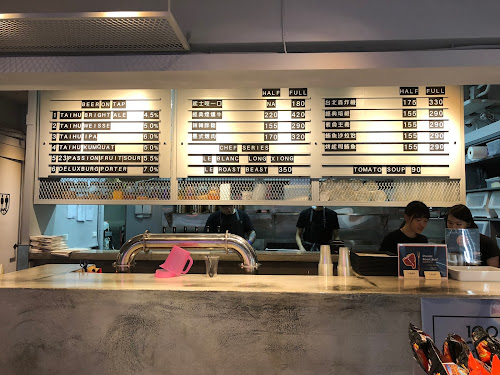 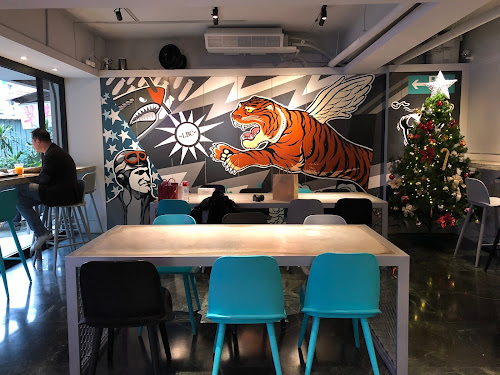 Liquid Bread Company is sandwich shop founded by the owners of Purebread Bakery and Gen Creative earlier this year, located in the quiet alley behind the Xinyi and Guangfu intersection. Those craving American style sandwiches in Taipei don't have a lot of choices, so the founders of Liquid Bread Co saw on opportunity to offer the sandwiches they wanted to eat themselves with higher quality ingredients made almost entirely in house.

Liquid Bread Co's partner Jim says, LBC was "the natural progression of a bread shop, the wanting of showing how sourdough is used, in addition to missing a well put together sandwich."

The menu includes classic sandwiches like pastrami, BLT, tuna melt as well as creations that give a nod to Gen Creative's chefs' heritages like carnitas, spicy pork belly, Taipei Bomber, which is a ham and cheese sandwich with egg salad added in.

Every month, there is also a collaboration with a guest chef to offer a limited edition sandwich. This month, it's with Le Blanc's Chef Long Xiong and (regretfully) Le Roast Beast was sold out the day that I went. (I will have to go back before the month's end to try it!) 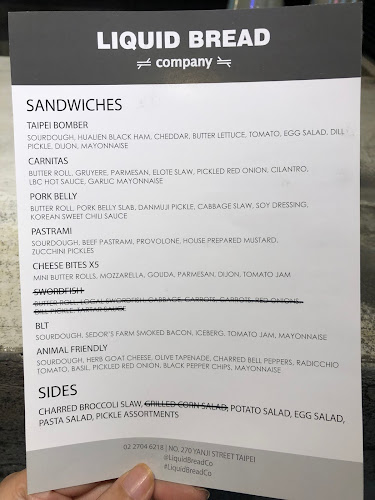 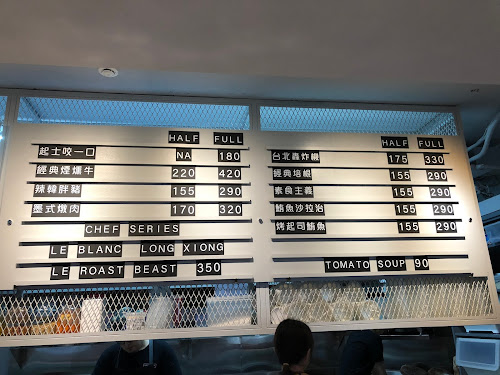 The menu board on the wall is only in Chinese, but there is a paper menu with English sandwich names and ingredients. It is a bit tough to match up prices to the sandwiches if you don't read Chinese since the prices are only on the menu board, but they range about NT$290-420 and half sandwiches are available.

Side dishes include housemade soup of the day, pickled broccoli slaw, potato salad, egg salad and packaged chips like Doritos. A variety of craft beer is also available to down with your meal. Service is self serve, meaning that you grab your own food, pay at the counter and then bus your table afterwards. 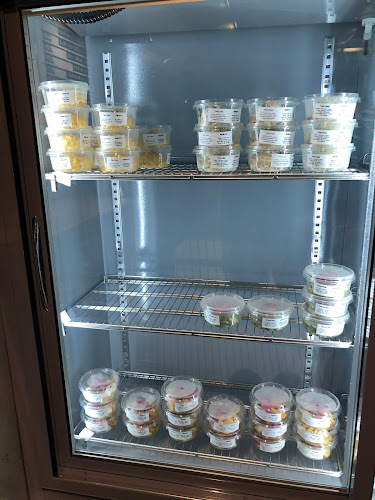 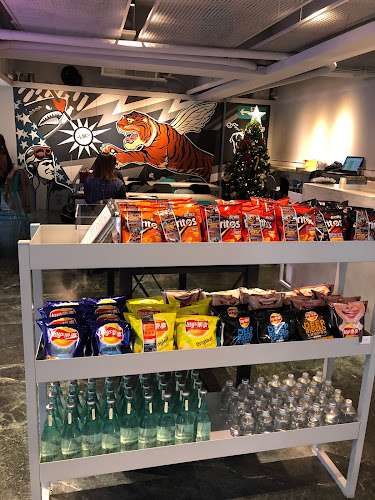 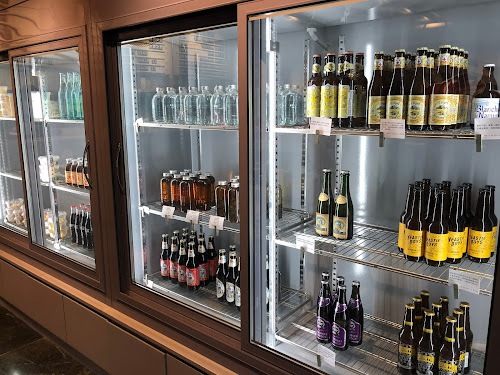 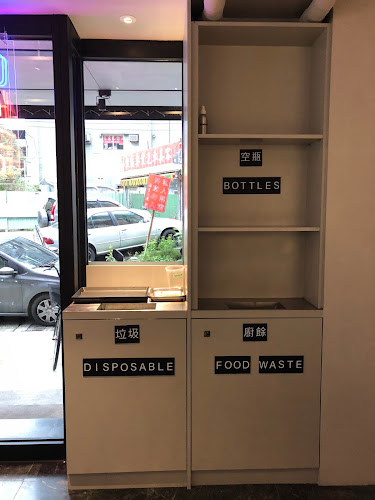 The roasted tomato soup (NT$90) comes with two small pieces of bread, which I used with the egg salad to make a mini toast. It would pair perfectly with cheesy bites and I used it to dip my tuna melt. Since it's more on the sour side than sweet, I wouldn't be able to finish off a bowl on its own, but paired with a sandwich, the creamy tartness is a great complement to each other. You could create your own soup and half sandwich combo, though it would be nice if they could offer a price break on the soup if you added it on. 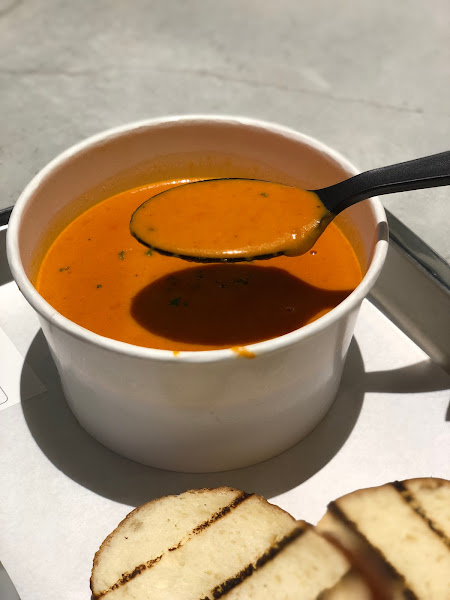 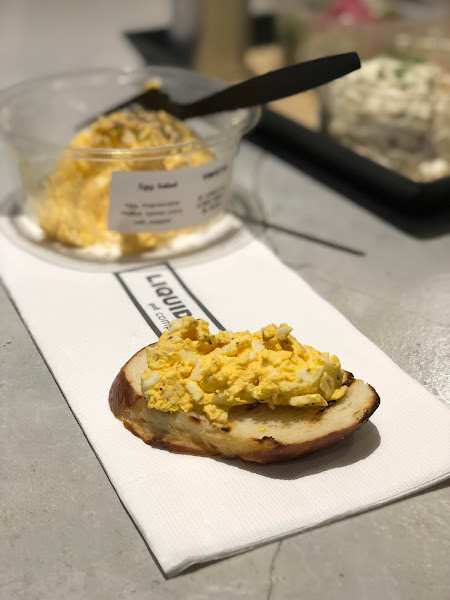 After trying almost every sandwich on the menu (thanks to Liquid Bread Co), which were my favourites? I was expecting it to be carnitas since that's the sandwich I had heard raves about on Instagram, but they were out of carnitas that day. Booooooo. 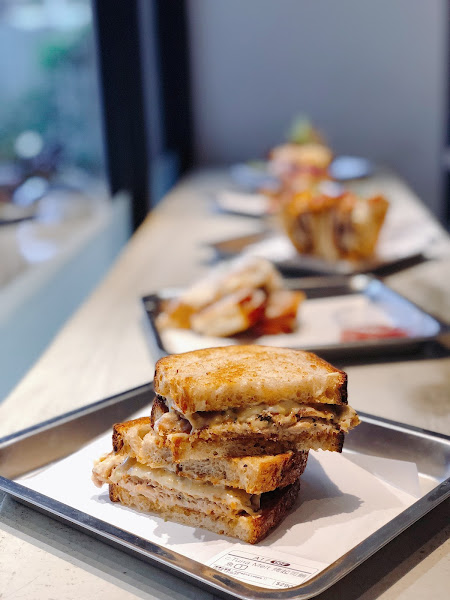 So I was actually surprised by how much I liked the BLT (NT$290). The thick slice of Sedor Farms bacon was crispy yet juicy, and perfect with the crisp lettuce and tomato. I typically wouldn't order BLT, but the owner Jim insisted I try it. It would be even better with some avocado slices, (BLAT? ABLT? BLTA?), but on its own it's a refreshing bite with the addictive tomato jam. 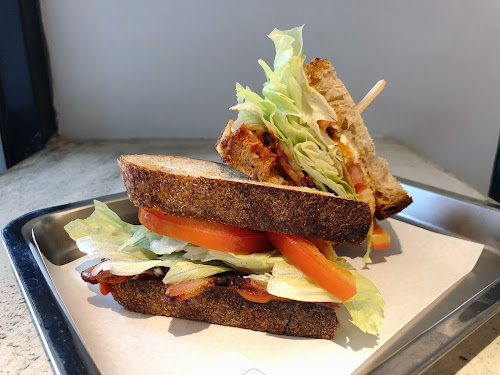 The pastrami sandwich (NT$420) was a nice stack, with provolone cheese, house prepared mustard and zucchini pickles. I liked it a lot, though the kind of pastrami I usually crave is the juicy, jus soaked heaps of thinly sliced pastrami like what you would find in LA at Johnnie's Pastrami or the Hat, rather than the traditional deli style pastrami on rye. 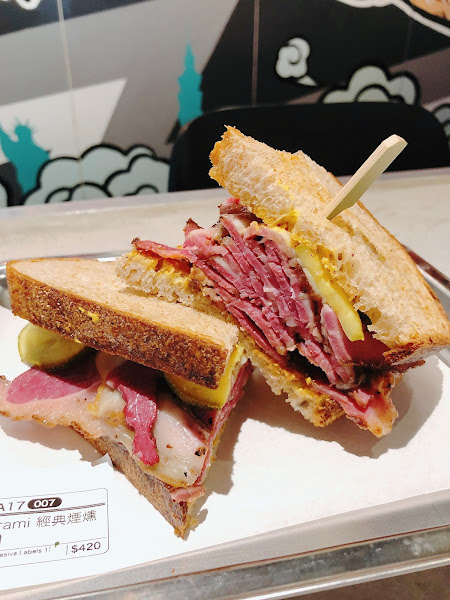 Made with mozzarella, gouda and parmesan, the cheesy bites (NT$180) were super buttery and cheesy, like a grilled cheese cut into quarters for bite sized enjoyment (or dipping in tomato soup). 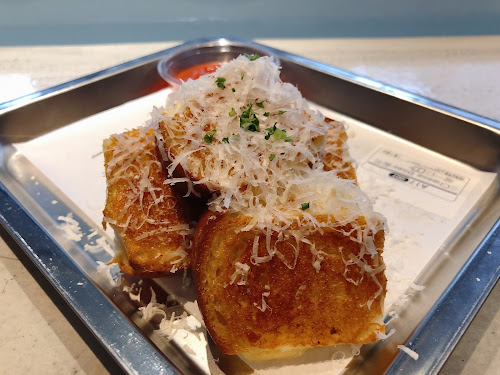 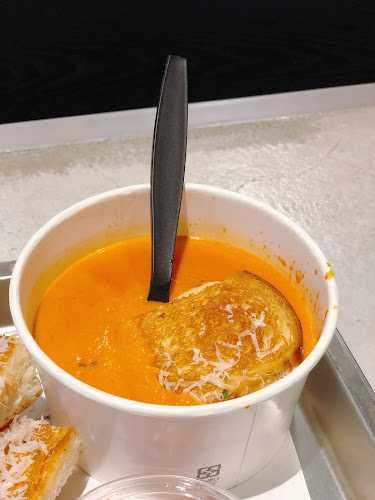 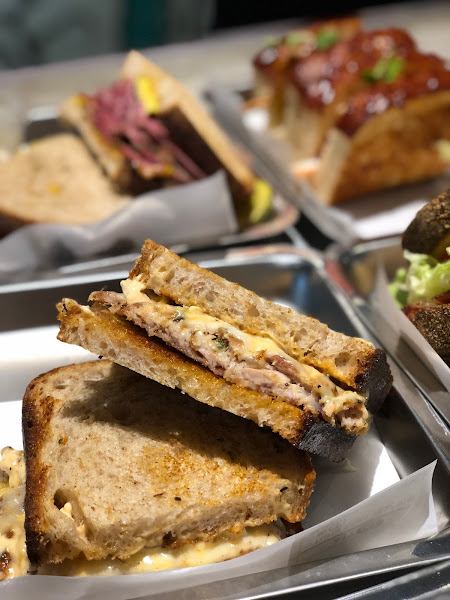 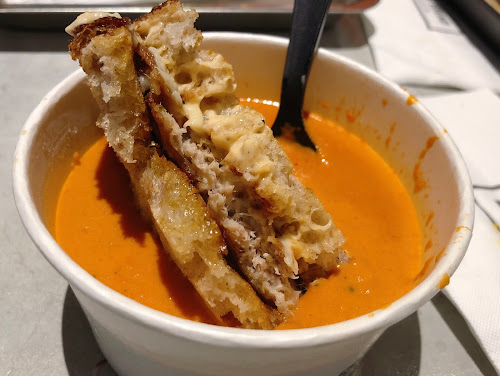 And in my video making, I only got video and not a photo of the Pork Belly sandwich (NT$290), which was really hearty with three slabs of spicy pork belly in each half, pickles and cabbage slaw on a soft dinner roll. The meat wasn't as fatty as I expected and since I didn't have room to eat it at lunch, I had it for dinner and it held up pretty well as leftovers. With so much meat, this sandwich is definitely the most bang for your buck, and an underrated AND filling sandwich where carnitas and pastrami get all the hype.

[TAIPEI] On a roll, posting another on the fly video. Have to mention that I loved the Christmas playlist in the store (which you can’t hear in this video)! In the states, everywhere is blasting Xmas songs but not here. So it was nice to feel that holiday spirit for the afternoon. Who’s been to @liquidbreadco and what was your fave sandwich? . . Please hit ❤️ or comment below if you like the video and you want to see more videos! 😜 thanks @liquidbreadco for the hospitality! . #hungryintaipei #hungryintaipeivideos #liquidbreadco #taipeieats #taipeifood #台北美食 #foodblogger #sandwich #goodvibesonly
A post shared by Joan (@hungryintaipei) on Dec 7, 2017 at 5:04am PST

And last but not least, the junk cookie with chocolate chips, marshmallow, oreo and peanuts. It's that kind of crispy chewy cookie that is hard to find, but not as monster sized or gooey as the cookies from DPT Coffee. 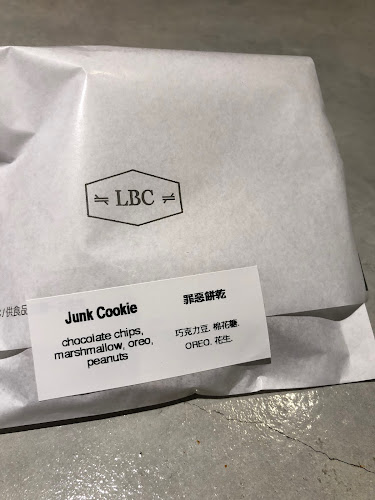 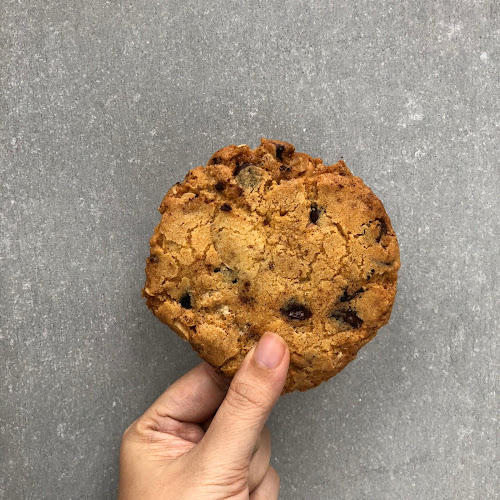 Before I went to Liquid Bread, I had heard a lot of people say, "the sandwiches are really good, but it's on the expensive side." I can't say that I disagree, as the prices for the sandwiches average about NT$290 and that's without any included sides or soup, but that they are serving some of the best sandwiches in Taipei right now and if you love sandwiches, then it's worth it to fill that craving- they taste just like a sandwiches you would get in the states.

The day that I went, almost all the other customers included expats or people speaking English and I wonder if the market for sandwich lovers is big enough for them. It will be a bit of a hurdle because I consider myself in their customer demographic and even I find it a bit expensive to pay US$10 for a BLT or US$13 for a pastrami sandwich since I often do make sandwiches myself at home. I would definitely recommend Liquid Bread to my friends and you guys, so I was on the borderline of whether to strongly recommend or recommend them, taking price into consideration.

When I posted the picture of the pastrami sandwich to my Facebook page- multiple people excitedly asked where? So good food will get people excited, but how many others are like us? That's seems to be the topic of discussion for a lot of the restaurants I've been trying lately- trying to offer something that's different for Taipei in the style of what's popular in the US with quality ingredients, but can they compete despite the higher price point?