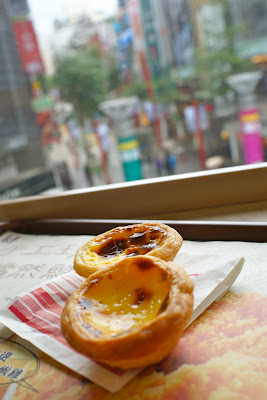 I often get emails asking me, "I only have 12/24/48 hours to spend in Taipei, where MUST I eat? what are your top 5 places in Taipei?" etc etc. Or I have visiting friends who I want to show around town but they are totally open to want to eat where ever I want to go. It's a lot of pressure to pick the right places! Haha. So I'll try to do certain areas that can be used as a guide for an afternoon or meal if you want to know where I'd take you if we were hanging out in person.

One place I end up gravitating towards when friends are visiting is Ximending. It's cheap, it's fast, there's lots to shop and see. It's often compared to Shibuya/Harajuku in Tokyo or Times Square in New York. 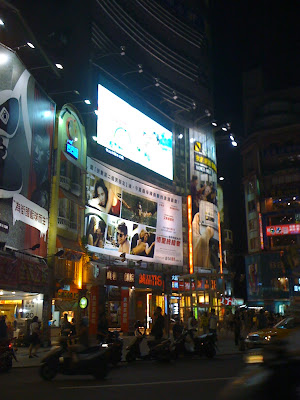 There's a certain energy from all the people walking around, the gigantic neon billboards spanning across the buildings and movie theater sized screens playing trailers or music videos, gaggles of trendily dressed teenagers, tourists or students in their school uniforms, and rows and rows of shops and shops and food. It's a great way to spend an afternoon or evening in Taipei that feels unique to the city.

My suggestions for Ximending is to eat a little at each place and then you can try as much as possible. Another option is to eat at a sit down place, depending on what you like. Ximending is also home to the Modern Toliet restaurant which I have yet to go or recommend, but I know it's very popular those looking for a really different eating experience.

So a few weeks ago, this is what I took my new friend Roger to eat when he was visiting Taipei. I won't talk too much about stuff I've reviewed before- you can click on it for old pics/reviews. 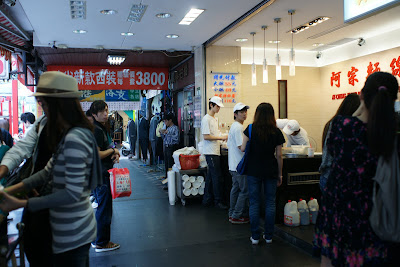 You still gotta eat Ah Chung Noodles standing up after you get your piping hot bowl of noodles and pork intestines. I recommend getting a small bowl so you can eat dumplings at the second destination. Don't forget to add a bit of chili sauce, garlic paste and vinegar to spice it up. 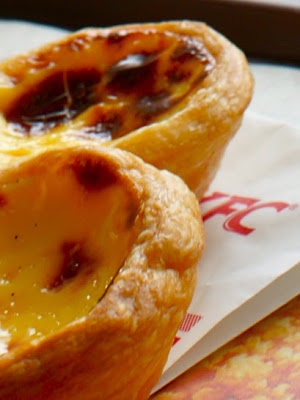 Only because we spotted KFC on the way to the other side of the street and the Mochi on stick guy was not open that day and my friend didn't mind mixing salty and sweet and back to salty. Like me, he was not a believer that this was a must-try, but after eating it, he understood. Hot, custardy, flaky, good. Of course, this doesn't have to be eaten in Ximending- just give it chance if you spot a KFC. 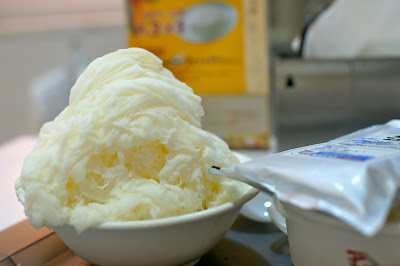 I'd had the silky and sweet almond tofu before, with their trademark almond milk in a silver bag to be opened and poured on top, but when I spotted the almond milk snowflake ice, I had to have some. More fine and sweet than regular shaved ice, this also had some almond tofu on the bottom! Score. You can also add your own toppings. 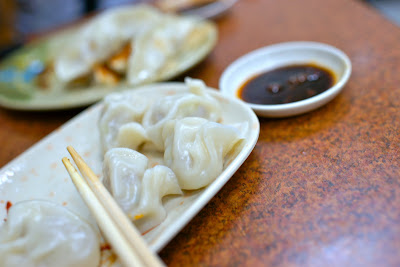 This is one of those places I'd never would have found if it weren't for my friend Justin- entire menu of eat is on the wall and under NT$100. 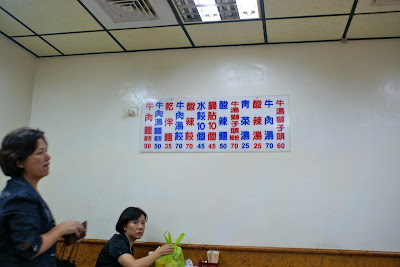 We made it there around 2pm and it was still fairly crowded inside. We ordered a set of guo tie or pan fried dumplings and tsui jiao boiled dumplings, since they wouldn't less us order less than 10 each. 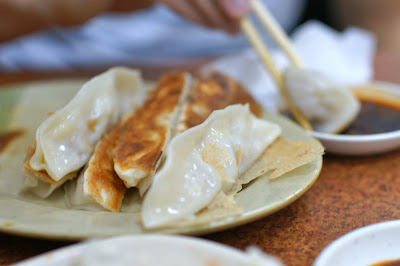 The guo tie were perfectly fried, with a thin crisped up layer on the bottom, but I tried their house-made chili sauce for the first time today and I couldn't stop dipping my dumplings in it. I asked the lao ban if I could buy some to take home and he said no, but told us how he stir fried the chili peppers in peanut oil. No wonder it had a fragrant, nutty depth since I'm usually not that crazy about chili sauces. 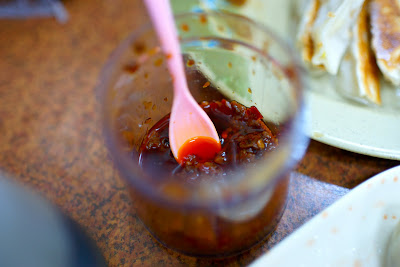 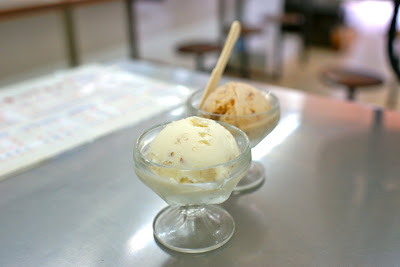 Just a block away, we made it to our last stop. Though we were tempted to try out some of the unusual flavors that they are known for, we ended up sticking to the sweet- red bean and lychee. The lychee wasn't as sweet and fruity and too creamy rather than like a sorbet as my previous orders- so I'd stick to guava or peach next time.

If you don't want to run around to different places, you can also check out sit down places like Mala Yuanyang Hotpot or Alleycats, or get a bowl of beef noodle soup along with the dumplings at Zhang Ji. Of course there are a TON of places to eat in Ximending, much less in Taipei, but this is what I've discovered so far.

1- Ah Chung Noodles- from the MRT Station exit, look for the McDonalds. It's one alley away from it.
2- KFC- also in main Ximending area, can't miss it- it's three stories high
3- Yu's Almond Tofu- go back towards MRT exit, cross the street towards Partyworld, past the shoe store on Chengdu Road.
4- Zhang Ji Fried Dumplngs- refer to previous post for signs to the little alley it's located in
5- Snow King Ice Cream- towards the police station/ Wuchang St

Any other must eats in Ximending? Please share!
Posted by joanh at 2:45 AM

There's a good little Indian restaurant there, Calcutta Indian or something like that. It's in Ximending, but I don't know where exactly. The food isn't bad, but I just went to Out of India again in the Shida Market, and I don't know what they did, maybe they changed cooks, but their food is really good now.

mmm egg tarts...i miss those so much. that's crazy that they have them at KFC though..never woulda thoguht that.

guo tie is also fantastic. it's so cheap and delicious over there!

Hi. I just found your blog a month ago. Just want to say thank you for your work. Next time I go to Taipei, I will stop by at Ximending and try some guo tie. Looks very nice!

Thanks for this post! I will keep it in my mind when I visit Taipei :). The almond milk shaved ice is probably the most interesting item on the list for me :). That of course being that I have never tried it before, and the ice looks so fluffy!

range: thanks for the reminder about both of those restaurants! I have heard of both but haven't been yet. i'll have to check out Out of India!

north: hi! thanks for commenting. your blog seems off to a great start!

eat travel eat: yes- a few touristy places on the list, but i LOVED the almond milk ice. Sooooo good.. they have more than 1 location, i'll try to translate the addresses soon

those egg tarts are so heavenly :)

they also have bbq stuff on a stick on the weekends and at night... those are so yummm!!!

Terrific post! My cousins always take me the Ximending when I go visit. Next time I'll ask them to take me to these food spots.
Roger is so lucky to have you as a guide! I thought he was in Taiwan after seeing his hilarious post on Eva Air food. hehe.

Yeah Xiemending is a major hotspot...a dense population of restaurants in and around, multi-plex movie theater, and the occasional teeny bop boy band meet and greet plus promo performance.

For those who can read Chinese there is a website called Shimen-walker I think ending in .com.tw but last time I tried surfing, warnings popped up, but it gives you a good idea of what to expect, as well as a fairly outdated but cool directory.

not too many really, but there is a sushi boat place that is pretty aweful and has been there for a long time (Da Che Luan/Big Wheel). Avoid...

Somewhere in the basement of a shopping arcade building about 5 mins away from the strip is a place called Lao Shandong that specializes in knife shaved noodles and dumplings, the place is easily 40 years old and pretty good. Literally next door to that is a place that specializes in Taiwanese style fried pork chops which Juma from Yelp LA (Taiwanese) also recommended.

I agree on Ay Chung but that place is pretty much a standing noodle bar (no chairs or tables), one dish/item only and it is superb.

Near the main road/closer to the MRT station, is a place whose name escapes me, but it's a whole 2 story restaurant that specializes in goose (Ya Rou Bian) that my brother in law swears by (another old school Xiemending fixture).

Another place inside Xiemending mobbed by Hong Kong tourists and the ilk, is Lao Tien Loo Lu Wei, started by a Shanghainese immigrant (easily 50++ years old) who settled in Taiwan. Their marinated duck tongues are super popular and even has celebrity endorsements (including older photos) of HK mega celebs like Andy Lau. It's more of a to-go place, but it's definitely worth trying.

Never thought KFC XMD would offer Portugese style egg tarts. Is it that location only, or any Taiwan KFC?

lol I like how you caught my chopsticks mid-dip on the potstickers photo.

Kirbie, I did indeed feel lucky to have the chance to hang out with Joan!

baby madison: yeah, i didn't hit up any of the street vendors this time, but usually the "chua bing" ones are pretty yummy

kirbie: thanks!! if you make it back to taipei, i'll take you! or we can explore a different area!

beefnoguy: thanks for all the info! i look forward to reading more on your new blog... btw, i think i've been to that really bad sushi boat place. UGH.. the portguese egg tarts are available at all the KFCs in taipei

roger: thanks! hope you had fun

Apparently the "bian suo" toilet theme restaurant is in the area :-o

Azabu Sabo (Japan? chain of dessert and sweets restaurant) has a location in Xiemending, looks fancy fun too.

How I miss eating in Taiwan. Lived there for years. My husband and I went last year for a visit and had An Chung Noodles. Yum! We're planning on returning next year and will most certainly be following your blog for updates and suggestions. Thanks for sharing!

No visit to Ximending is complete without a trip to Yaroubian 鴨肉扁土鵝專賣店) at No. 98 Zhonghua Rd. Meiguanyuan is also a landmark--there was a nice write up in the China Times the other day as part of their new series of features on Taiwanese food.

Also, the Red Theatre and the many gay bars and cafes there deserve a mention as well. There is a friend;y (but decidely so-so) Thai restaurant with outside seating and the small cafe at the opposite end is a great place to while away an hour or two over Belgian beer or coffee.

Thanks for this! Since we stayed in Ximen (and this writeup inspired me to stay here), this was perfect to explore the area!

I'd say - after having been to Taiwain only once (so far), but with locals - that if there is a real lack of time Taipei Main Station should not be overlooked. the food quarters are quite nice and there is a noodle place upstairs that do handpulled beef noodles - its very very good. Also, just strolling around on the main floor looking at the amazing baked goods is worth a lot. My first impression from Taipei was from here...