The first time I had heard of Beard Papa was during my first trip to Tokyo early last year. There was a sweet pastry smell in the winter air, and then we spotted a line in front of a trailer-like store, with the line full of kids in their school uniforms. WIth the smell drawing us near, we decided to wait in the line and try the cream puffs from the bright yellow trailer. It was worth it- warm and fresh- the cream puff had an airy combination of the crispness of the skin and the softness of the inside of the puff, along with the melt in your mouth vanilla bean creme which tasted more custard than a frosting whip cream. 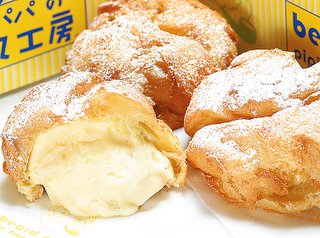 The Beard Papa experience in Taipei is a bit different. Though they have the same logo smiling at you, the countertops of cream puffs have already been baked and have been cooled off- piled waiting to be filled with your choice of the original vanilla bean creme, or sometimes daily special such as chocolate or coffee. 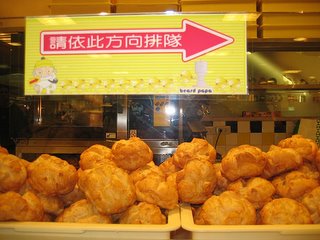 They are located in the mall food courts instead of outside. There is no fresh baked hot puff smell wafting towards you or hot puff for you to bite into. There is no line. Not to say that the Beard Papa puff isn't worth eating here, it's still good. Just not melt in your mouth delicious. As anyone who has experienced both a "hot" freshly made Krispy Kreme donut and one that was not, you know what I'm talking about.

As cream puffs go, it's still a good treat. At NT$40 a puff, it's not cheap and it's not expensive. The original vanilla flavor is my favorite, you can see the vanilla bean specks in the creme. Not being a fan of chocolate ice cream or milkshakes, I prefer the vanilla over the chocolate. The coffee flavor tastes like chocolate with a smidge of coffee flavor. I really like how the cream is a custard and sweet, but not too sweet, rather than like whipped cream that you might find in tiramisu or a donut which often tastes too much like frosting for me. 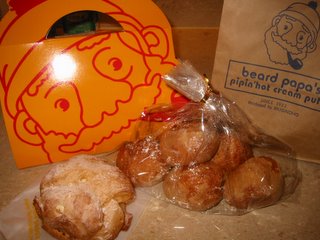 They also are launching a new mochi cream puff. They are smaller and chewier, as the puffs are made with a gluten flour. Being smaller, you get less of the cream, which is a minus. They taste similar to the ring donuts from Mr. Donut, which is an interesting blend of chewiness and doughiness. I prefer the original cream puffs to the mochi ones, which run for the same price.

If sounds good to you, they are in lots of locations in Taipei, but I only know of these two off the top of my head, and now all over the world. There are locations opening all across California besides their locations in Gardena and Hollywood, and have locations in NY, NJ, Boston, Honolulu and have a store set to open in San Francisco.

Seriously though, I do agree. Beard Papa is great, but so much better when they are fresh and hot.

Can't wait for the SF one!

i went to the one in hollywood - it wasn't great - because you're right - it'd probably be so much better fresh rather than just cream squirted into the puff. but i guess it wasn't really complaining at the time.

the one in NYcity is great and very small. I'll never forget seeing the HUGE line when it first opened. I've had the ones here and they're ok. Just not the same.

It's not located at A4 and Eslite. The three locations are at Mitsukoshi A8, New World Centre (near Taipei Station) and SOGO (Zhongxiao Store).

anonymous- there are a lot of locations all over Taipei- thanks for letting us know about the other ones, but there IS a Beard Papa at Eslite Xin Yi and A4.