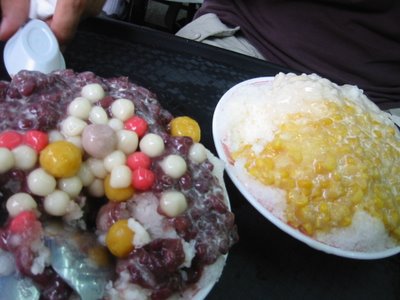 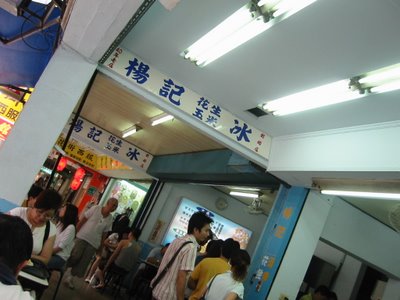 The shop was very busy even with a lot of seating, and there is usually a short line. The signage says they have been around over 40 years, so local neighbors should be able to point you in the right direction. Everything is chinese, but you can point at the toppings. I would recommend it if the toppings pique your curiousity, otherwise, I would stick your favorite shaved ice locale.
Posted by joanh at 4:23 PM

Whoaaah...you've been busy, Hungry Girl! Good job! A good peking duck place is always important when you crave that crispy skin. This latest post, looks really good too. It has been super hot in the Bay Area lately and this would be a unique alternative to plain ice cream.

Thanks for the posts!

that's pretty funny, taiwanese people do love corn hahaha! my mom use to make a corn soup and the best way i can describe it is to call it a cream-of-corn-egg-drop-soup. it was one of my favorites to come out of her kitchen.

hi catherine! thanks for the comments! yes, i love corn too.. especially creamed corn soup. but it DOES NOT belong on shaved ice with condensed milk on top. ugh! *shudder again.

tt- we need to find a good peking duck place in SF!

My dad brought me to this place! He says he went there with my mom on a couple of dates...man that was almost 25 years ago.