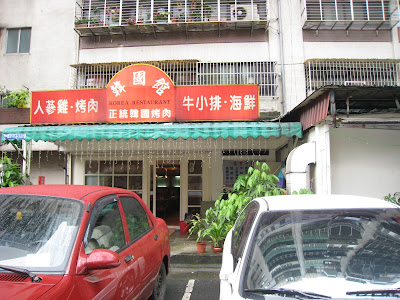 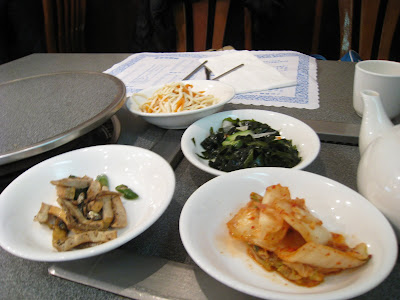 First let me say, I'm writing this review after finding another Korean restaurant elsewhere in Taipei that is MUCH better, so I can't help but to compare the two in my mind, which makes the food here LESS tasty in comparison than if maybe I didn't have an alternative to go to. Make sense?

Anyways, I spotted this place when I went to the Vietnamese Restaurant across the street, er, lane and knew I had to wander inside to see if they had the cold noodles. It was a great sign that they were packed during lunch and that it was full of tables of people speaking in Korean. I think to myself, jackpot authenticity!

But I didn't order what seemed to be the popular order of the Korean spicy hot pot and bbq beef at the other tables- it was too much food for one person. Instead, I opted for trying the seafood pancake and (Yay) the cold naengmyun noodles.

It cracks me up to realize that when you say "naengmyun" in Korean it sounds sort of like "liang mien" in Chinese, which both mean "cold noodles."

Their menu was in Chinese on the table, but when I asked if they had an English menu, they did have a menu with pictures. 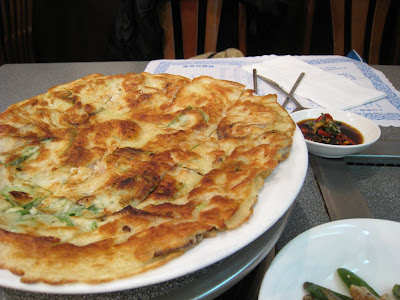 The seafood pancake was just okay and didn't seem to have any recognizable seafood chunks in it. You know sometimes you can see the shrimp or crab or squid, but I didn't really spot any. 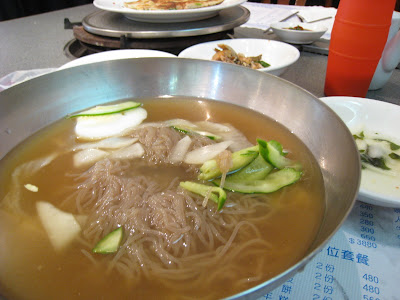 The noodles were also just okay. They were chewy and soupy, but not slightly sweet or super cold at all. I think it was also missing a piece of meat that was in the picture in the menu. I got an additional squeeze bottle for vinegar, but it became more of a chore than pleasure to try and finish as much as I could. 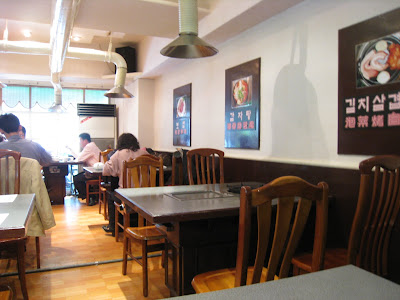 After paying my bill, I asked how long they had been around and I think she said for over 10 years. I asked for a business card and she gave me a lighter that had the info on it (that I subsequently can't find, so sorry for no phone number yet) (found it!). If there are any readers who have found this little place, I'd love to hear what is good here, since they obviously have done well enough to maintain a Korean customer base.
Posted by joanh at 1:46 PM

Email ThisBlogThis!Share to TwitterShare to FacebookShare to Pinterest
Labels: $$ depends on what you eat, korean

Heyyy~ I just came back from LA and have been craving Kimchi Jigae like crazy. So far what would you rate as the best Korean restaurant in Taipei?