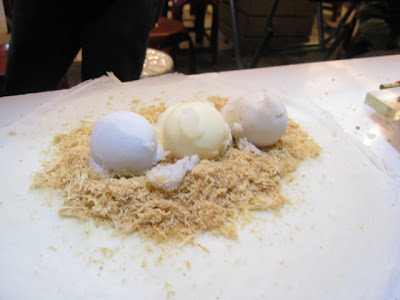 Kid friendliness: might be messier than a cone, but there is a plastic bag to hold it all in 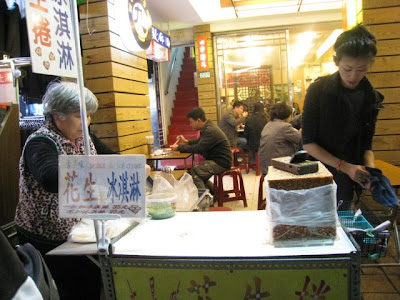 This is one of the weirdest things I've found as a Taiwanese street eat- maybe because I grew up familiar with smells, sights and tastes of oyster omelettes, stinky tofu, shaved ice or oyster vermicelli with pig intestines, pig's blood on a stick so that those things are all part of my encyclopedia of Taiwanese food and therefore no longer weird to me.

But who would have ever thought to come up with shaving a huge block of peanut brittle, sticking it inside a thin crepe-like wrap with pineapple, taro and peanut ice cream, and then sprinkling it with cilantro? But guess what, it actually works and after eating it I kept thinking about it for days.

I had heard about it before after someone asked me about it through the blog, but it was my first time seeing it in person. If you run across it in other places (I've heard Danshui), let us know where. In Chinese, it's called "Hua shen bing" as a sweet counterpart to the "run bing" which you might have seen.

First, I don't know if this is the permanent spot for the vendor, but I found it in front of this restaurant called "Xi Jiou Ah Jiou Lu Riou Fan" or roughly translated "Four Corner Mr. Nine Braised Meat Rice" on Guangzhou Street. 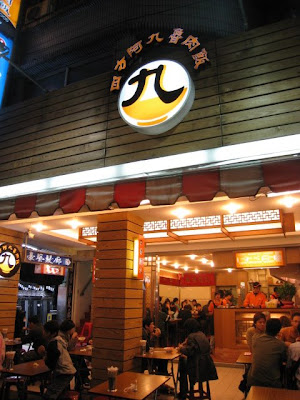 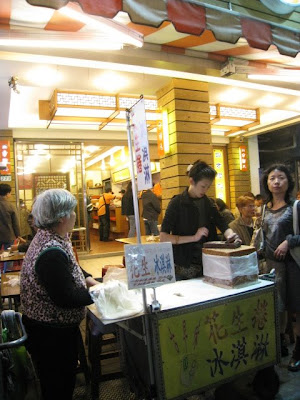 One wrap is only NT$35 or you could get it without the ice cream for NT$25, but I definitely recommend it with the ice cream. 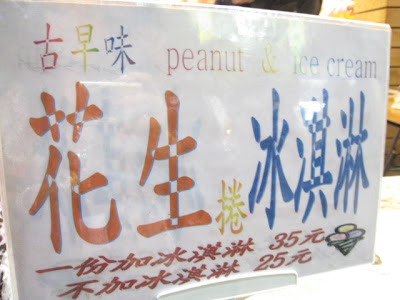 They shave this huge block of peanut brittle with a wooden thing and then put the shavings on top of the wrap. 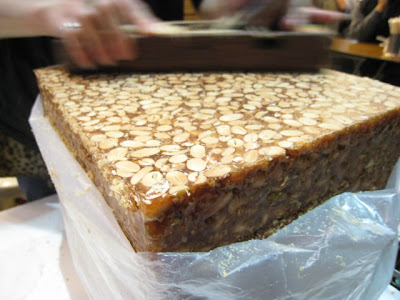 They offer pineapple, taro and peanut and you get three scoops and get to choose. We got one of each, but next time, I would just get pineapple with more cilantro. The tartness went well with the sweetness and flakiness of the carmelized peanuts and fragrant cilantro. The peanut and taro flavors were not as strong. You can get it without the cilantro too, but it wouldn't be the same- I guess the most similar flavors I could liken it to is when you have cilantro in mango or pineapple salsa. Same thing, right? 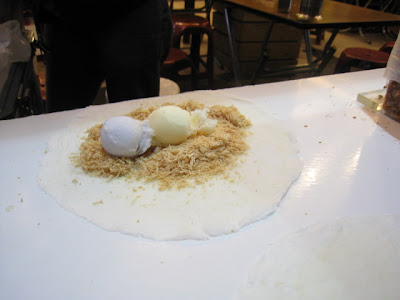 You get it all wrapped up and it looks like a run bing or spring roll. Eat it fast though the ice cream didn't really melt as fast as I thought it might. 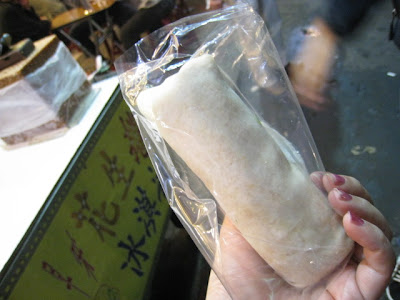 Mmmm. You can spy the tiny bit of cilantro on the side as we asked for less cilantro in case we didn't like it all together. The peanut brittle shavings are definitely much better than just ground peanuts with sugar which is found in quite a few Taiwanese street eats like run bing and gua bao because it has a crystal like texture that is a great contrast to the softness of the ice cream. I guess you could call it a dessert crepe or burrito or spring roll. 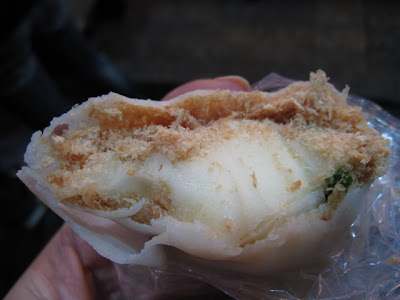 Look for part 2 of this night in a separate blog- more of street eats near Longshan Temple!

You can find the peanut and ice cream thing at Roache Night market, 饒河街夜市. There is a small stand in the night market.

this looks really good! if i visit taipei, i have to try! :)

So my goal here is to get some chocolate cake that can rival the great wall of chocolate from P.F. Chang's back in the States. The ones I've had so far are wimpy by comparison. Do you have any suggestions?

Although quite a drive away from Taipei, I remember seeing a bunch of vendors selling this as I left Wufengqi (五峰旗) near Jiaosi (礁溪) this summer.

virginia: cool. haven't been to raohe in awhile, but i'll look for it next time.

yumyum: thanks for reading! it's definitely worth a try

tina: hmm.. I've never had the PF Chang's chocolate cake, but i'd suggest the chocolate cake at Gordon Biersch or Macaroni Grill or Chili's. Otherwise, cakes from Ellie's or Pozzo. Let me know if you end up try any of them

Passionate Eater- haha. It's definitely an unexpected but interesting combo!

Kevin- cool! thanks for reading and letting us know

Call me biased (I truly detest cilanto), but this snack sounds really perfect UNTIL you include a sprig of cilanto. Seriously, who came up with this idea?

Wow! This brings back a lot of fond memories of Taiwan.... Many years ago, I made this very desert for one of my school's fundraising events. We called it 冰山雪蓮 Bing shan xue lian. Can't remember the exact origin of the name, it probably came from one of the popular Hong Kong soap operas in the late 80's. Glad to know it is still around!

That looks good!! I love all things peanut, so that is definitely something for my Taipei food list...

WOW. that looks amazing. my mouth literally started watering when i saw it. Next time I'm in Taiwan we have to go each it!

I had one of these wraps at the Taiwanese American Festival in NYC. It was delish! I love your blog btw.

This is also sold in Sansia, had it last year and went back again the other day to have some more.

This 'dish' has to be the most amazing thing I have ever eaten. The first time I had it was in Jiufen and it blew my mind. I couldn't stop raving about it to everyone! It seems to be the most crazy concoction of foods together but it works amazingly well. Plus, it's great to watch them being made and marvel at the huge block of peanut brittle. I have since found a stall in the Ximending area (just a man with a wheelie-cart) and one in Raohe market. Raohe market had strawberry ice-cream in theirs but the others just had taro I think.
For those of you who don't recognise what cilantro is it's coriander - or that's what I know it as anyway.
Always on the lookout for these things in other places...

I went to Taipei last february, and searched this stall along Long Shan street, but didnt find it :(..

I found a tiny place which looks permanent on Yongkang street not too far from the park which was selling the pancakes. Didn't buy one as I'd just eaten but it looks to be one of the few that is permanent rather than just a wheelie stall.
Good luck finding them!

i just got back from taiwan and had this in the parking lot of a mangrove park in tainan. it was so good and unexpected. definitely going to try to re-create it here in the states. yumm! ^_^

CaffeineNicotine: haha.. we were doubtful about the cilantro too, but it totally made it interesting!! kind of like mint in desserts, i suppose. heard it originated in Yilan

Divamom: thanks for sharing! don't see it around often, but it was a pleasant surprise!

Melissa: thanks! that's so cool that you got to try it in NY!

ragtag: cool! thanks for sharing!

Cathy: i know! crazy huh? hmm, didn't spot it in ximending or rao he.. will have to spot it! and yes, cilantro also goes by coriander..

xyyan: sorry! i guess she is not always there? i know there is one at yong kang st near ice monster, but it's only available after 5pm

Cathy: yes! thanks! haven't tried it yet since it's only available in evenings/night

Rachel: hee hee.. i want to recreate it too. kind of like an ice cream crepe, right?

I also had it in Jiofen in November. It was amazing and among my favorites from my visit. Anyplace to find it in SF?

I love this dessert! I had it at Raohe...

I wonder if this is less common when it's cold out? Was just on Yongkang yesterday, and of course Ice Monster is long closed and sadly, the hu-jiao bing place was as well (probably temporarily for CNY), but did not see any permanent-looking shop that seemed to sell this.

Today was at Ximending and the cart was parked right by Red House, but we were there early and the vendor wasn't around. Later when we went back to the station, looked for him but the cart had left...

I realize this is an old article... but I had this at the Shilin night market. Will never forget it! Also, we had coconut ice cream :)