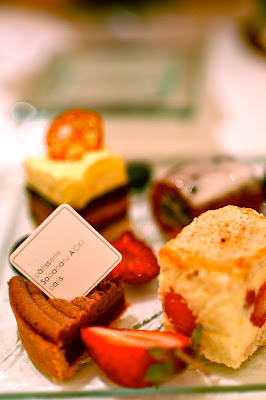 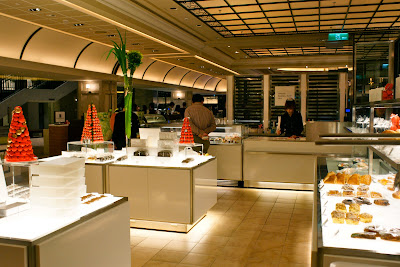 I'd spotted the sleek, white mini-shops of Patisserie Sadaharu Aoki Paris before at the corners of various malls in Taipei with the dozens of colorful macarons under glass counters, but the price tags stopped me from sampling. Macarons are pretty, but the thought of paying that much for one bite of sugar always made me hesitant. 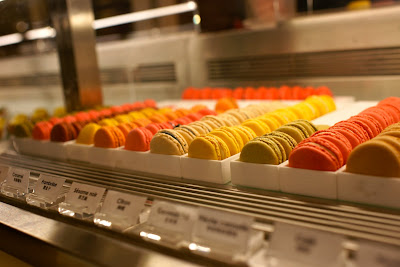 But when food je t'aime suggested meeting at their new sit down location at Bellavita for afternoon tea, it gave me an excuse to finally try what I'd been hearing about for so long. A cake sampler degustation sounded quite tempting.

At the Bellavita location, there are about four to five small tables for afternoon tea'ers to sit and sip, but we didn't have a problem grabbing a seat on a friday afternoon. 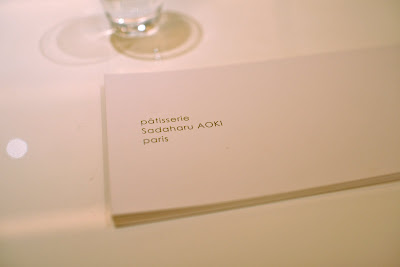 the Bonbon Maquillage ("makeup chocolates") (NT$1080 for 12)- vividly colored chocolates that could be mistaken for pastels in a box or colors from a MAC makeup kit... 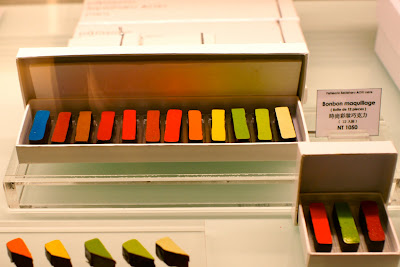 the rainbow colored rows of macarons and cakes flavored with traditional or Asian infused flavors... 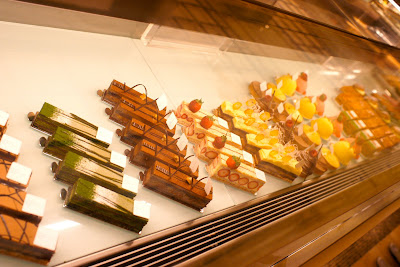 or the emerald green matcha that was prevalent in the desserts and even drinks that could be made into a cold matcha au lait glace. The flavor was quite strong and sweet that wasn't balanced out by the milk, and I wished I'd ordered a regular latte about two sips in. 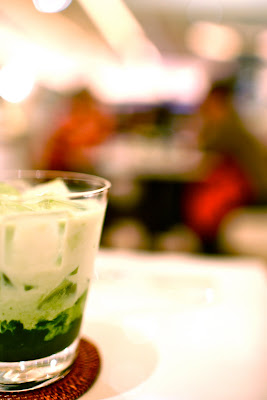 The illustration of the Verrine Bamboo (NT$340) also piqued our curiosity, which looked almost like one of those self-sustaining ecosystems or an Earth Day themed dessert. 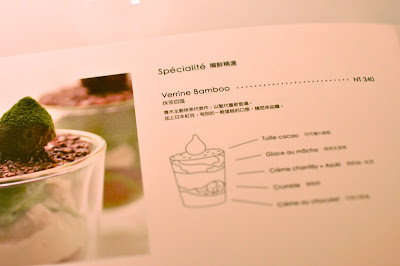 When it came, we oohed and aahed at the super-Smores in a cup with a Japanese twist... 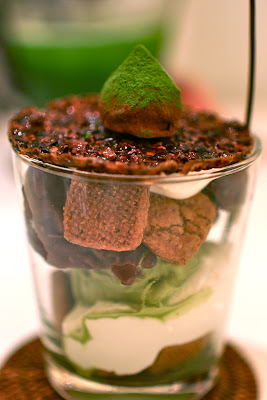 But it had too much going on and was too sweet for me. There was marshmallow-like creme, thick bite-sized graham cracker type squares, azuki red bean, green tea ice cream, after eating the chocolate cookie on top. I think if some of the flavors were not as sweet, then it could balance out, but with all the elements being so intensely sugary, it became a tad overkill. 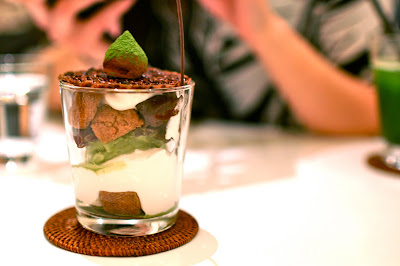 For the same price range, get the Degustation (NT$380) instead. Six mini-portions of cakes that are actually enough to share between two- a sampler plate that is perfect for the indecisive. 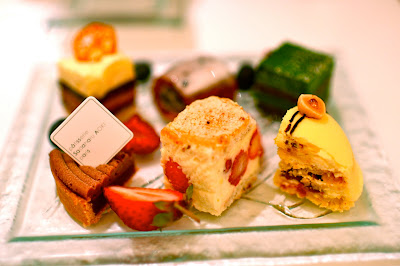 Each bite had a distinct punch- sesame, green tea and chocolate, hazelnut and caramel- and all were quite sweet again, but at least I felt like I had gotten more my money's worth with this dish. 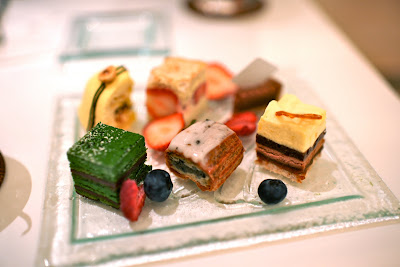 Patisserie Sadaharu Aoki Paris only has seven shops in the world- the others are in Tokyo and Paris. So the Taipei shop might draw visitors who want a taste of the French/Japanese creative confections with flavors like sesame, citron, matcha, caramel, wasabi or yuzu. I've also sampled a bite of the Bonbon Maquillage which was given to a friend of mine and it was a heavenly bite of ganache- I'd happily accept a box of those (or macarons) as a gift over Godiva anyday.
Posted by joanh at 1:09 AM

I had a such lovely afternoon teatime with you! It was amazing to finally meet you in person. I agree that the cake degustation was waaay more worth the price. I am the epitome of indecisiveness so I loved getting to try a little bit of everything. And it was perfect for sharing :)

I'm not sure when you made the change to your blog, but I'm loving the new clean look.

I wouldn't mind trying the 'super smore', as long as I had a giant glass of cold milk.

food je t'aime- i'm super glad you gave me an excuse to eat cake! :) it was really great to meet you too and i'm looking forward to the next time!

christine: thanks so much! I think the matcha tea definitely didn't help me enjoy the verrine...

Oh man that looks sooo good!! How were the macarons (if you tried them)?

PS- I highly recommend Greek Go in ShiDa. It's near Yofroyo. The food is amazing and from what I was told by my European friends, pretty authentic.

Yeah Japanese French is clearly very popular in Taipei. Even bakery chains straight from Japan execute flawlessly. If only a competent place could open up in California that is not outrageously expensive...

went here for afternoon tea, it was delish! :)

oops, i meant that i've been to Salon de The de Robuchon and the afternoon tea was delish! all the bellavita posts look so pretty i got confused!

The macaroons are fantastic. I have never really seen the point of macaroons before, but one tiny nibble of the yuzu one and I was smitten! Pricey, yes, but I would definitely rather have one of those than a whole slice of cake from somewhere else. (The sesame one is great too).

Went to Aoki just to be very disappointed. The server missed my order of Degustation. My friend and I ended up with only a green tea eclair to share! Errrr, what was she thinking?! The eclair was so-so. So disappointed.

Aoki's baking is outstanding. Do not overlook the wonderful pastries available too. They are the best I've found in Taipei.

I must say I went here and had their macarons. I was disappointed!! The outer shell was not crispy and the insides were too mushy if anyone knows what I mean. Perhaps this is the best in Taipei, I haven't compared but I did try macarons that my friend brought me from Paris something called the Le Incredibles? Those were amazing compared to PATISSERIE SADAHARU AOKI PARIS.