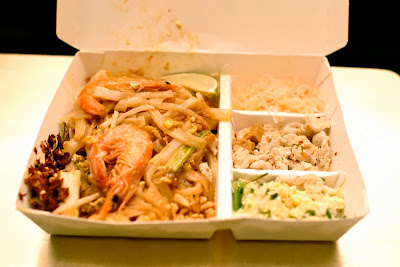 Kid friendliness: seating is in food court; some items might be too spicy/sour for kids 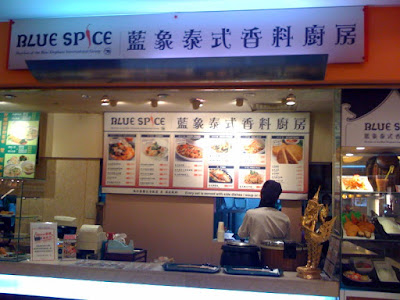 One of the things I miss in Taipei is Thai food delivery. In LA, if I feel like some pad thai, tom kha gai soup or green curry, I just make a quick phone call and half an hour later, I'm eating my steaming hot food and I didn't have to fight traffic, find parking, or find other people to eat with. In Taipei, if I want Thai food, I usually end up at Thai Town or Mei Kung, both great, but more sit down and suitable for a meal for a larger group so you could have more variety. In Taipei, I have yet to find a Thai restaurant that delivers, or maybe I'm just missing some special code or place that you guys need to clue me into.

So the next best thing to delivery is to-go. So I decided on pad thai(NT$150) to-go after musing over Blue Spice's English and Chinese menu of curries, noodles, fried chicken and appetizers after catching a movie at Breeze. 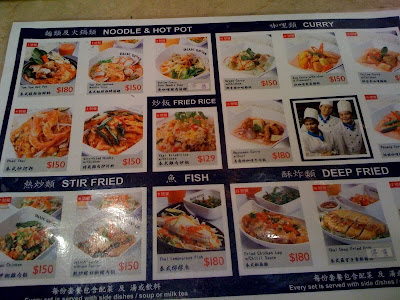 The prices range from NT$55-$180 and I was pleasantly surprised to find out that with my to-go order I could choose either soup or thai ice tea. I chose thai ice tea and it was sweet and not watered down.

Another thing that surprised me was the complimentary mini appetizers on the side that were included- glass noodle salad, pork and egg which had strong sour and spicy flavors that complimented the pad thai. The portion was filling, but not quite enough to share.

I look forward to going back and trying some of the other things on their menu- the green or red curry with chicken or the fried chicken with chili sauce, which the friendly cashier said was a best seller.

I've had some pretty bad experiences with Southeast Asian food in Taipei food courts for some reason- the Singaporean/Malay stall near Jasons in 101 or Pho in Eslite and Breeze Main Station- but Blue Spice is definitely worth a try for Thai food lovers.

I, like you, have had some pretty bad experience with Southeast Asian food in TP...You'D think it should be better than LA because it's closer to Thailand.

I think most Chinese people just don't find Thai or Vietnamese food to be as palatable as traditional Chinese type cuisine. Which is really a shame, since it'd be nice if there were a good take on pho here.

@nicholas- have you tried Yue Yuan Pho yet? I think it's good and you have to try the chicken sandwiches! or the pork over pho at Pho Hoa! both yummy! for thai- i have a few fave spots, but just tried a lot of bad places too.

Hi! Wonderful blog!
I'm moving to Taipei in October, and this blog will be my main guide :)
greetings from Barcelona!

I like this place in food court as well! I found it in the Green Sogo before but recently found it no longer there. Maybe the one in Breeze Center is the same one that moved there! My fav is their green curry.

I tried looking for this place twice at the Q Square location and was unsuccessful- either it's no longer there, or Blue Spice is not in the name. I couldn't find anything that resembled the menu in the picture :( I guess I'll have to go to Breeze to try it out there...

These three locations were closed long time ago, me and my friends went to three locations. Probably they closed the day after you went there. lol... I was so bummed for being unable to try.

BarcelonaMade: hi! thanks for commenting- hope you have a smooth move to Taipei! I've never been to Barcelona, hope to go one day!

orangesoda: oh no.. hopefully they didn't shut down all their locations.. it wasn't very busy the few times i went by.

Andrew Boyd and Endy: i heard that QSquare might be moving, but I am not sure if Breeze is still open or not. I will check it out and let you guys know. Hopefully there's still one location around!!

Hi All, I tried to find this at the Breeze Center today and no luck. I guess they have all closed :(

I seriously think they're all gone. I've been on a quest ever since this post trying to find it..and I've officially given up on my search. It is definitely NOT at any of the 3 Mitsukoshi buildings at Zhongshan. Very disappointed to say the least.

Emily and boydandrewt: thanks for the on-site reporting!!! bummers that they seem to be all closed!

sooooo glad up update ur posts. i was going to try it today but wanted to check up on ur blog. very sad to see it's closed! i wanted some thai near chungsiao e. rd but didn't wanna go to a restaurant style place.

Perfect!i love the foods there. their very tasty and enjoyable with friends.