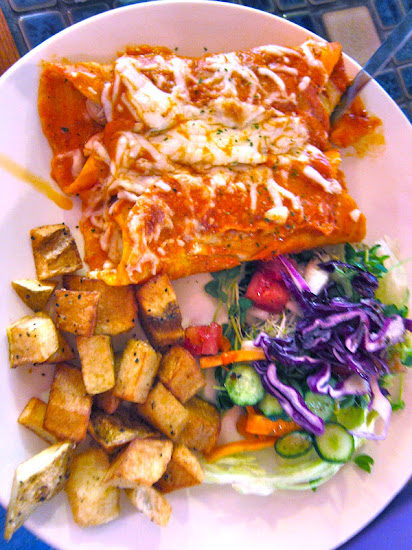 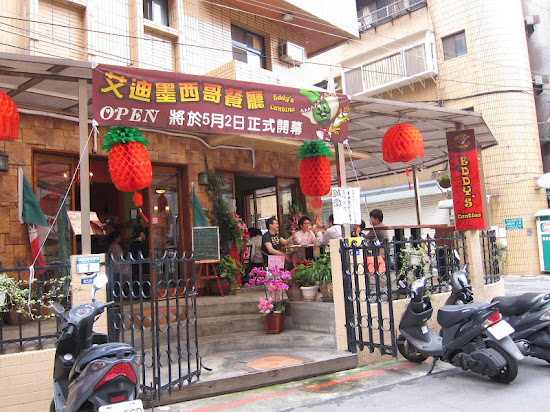 Almost a year ago, Eddy's Cantina opened up a second shop in Tienmu, bringing their enchiladas and nachos a little closer to Taipei city. I suppose the move was good, since earlier this year in February 2012, they committed to the move and Eddy's Cantina closed down their Danshui shop (or Tamsui, I guess it's now has been converted back to). (You can tell I'm really behind on posts when it takes me a year to write it up, but I figure that I should definitely remind readers so that no one makes a trip to Tamsui and find a "For Rent" sign instead of Eddy's). 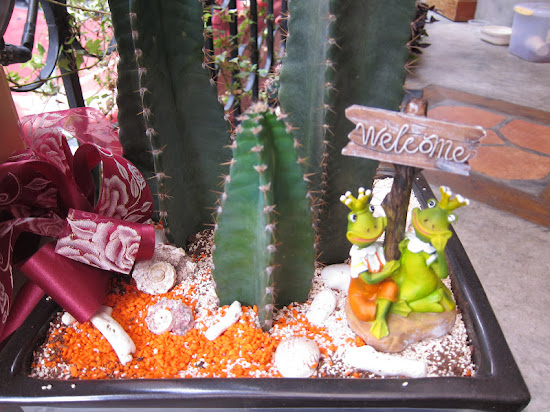 Eddy's Cantina Tienmu retains the same festive, bright color scheme from the original location is a lot more spacious for large groups of hungry diners. Eddy's Cantina really feels like a mom and pop shop, with Eddy often in the kitchen and sometimes his mom coming to town, making limited edition tamales. 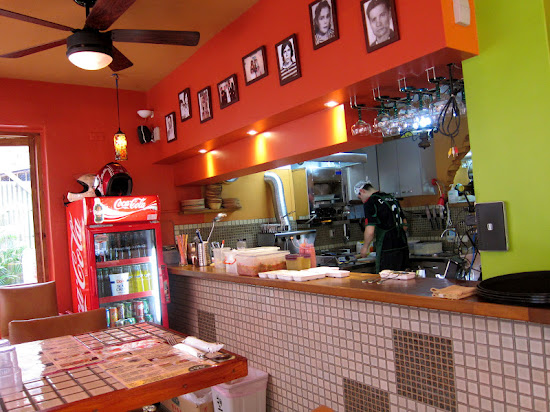 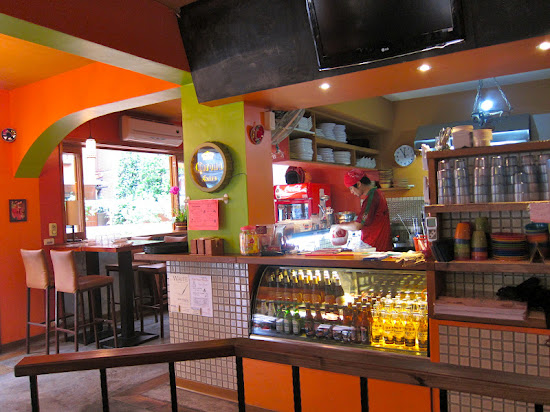 The menu includes all my favorites- nachos, enchiladas, chimichangas, as well as tacos, burritos- or lunch special only rice bowls with carnitas, huevos ranchero or fajitas, and even an array of beers and cocktails for happy hour. 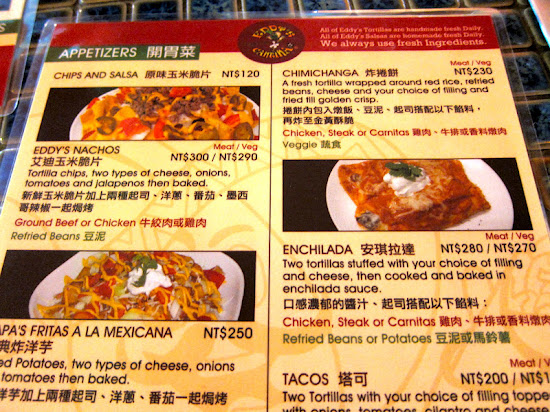 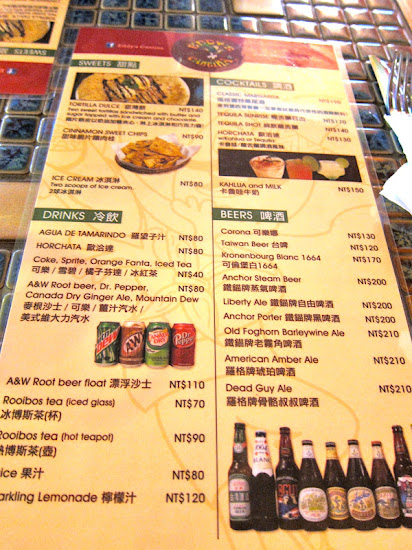 Eddy's Cantina's has one of the best nachos (NT$300) in town, always a heaping pile of chips, cheese, jalapenos and ground beef. I think we had to order seconds. 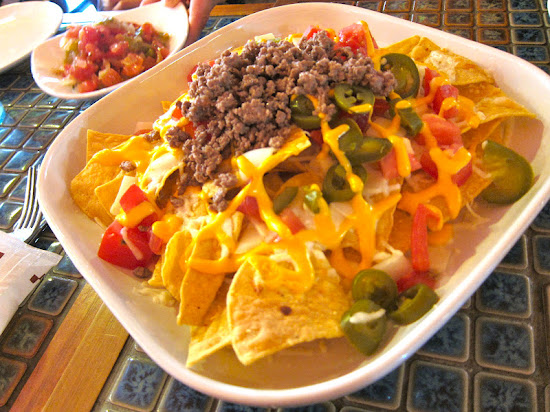 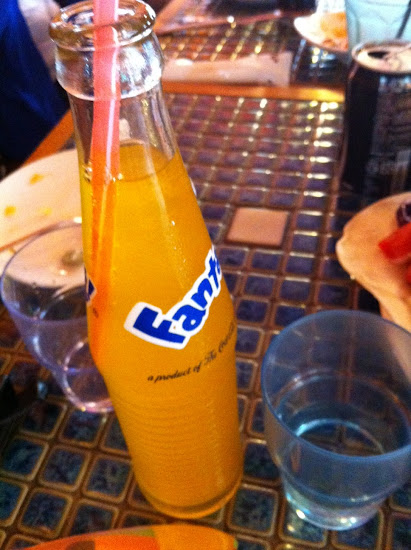 With the set lunch specials, you can choose between refried beans or potatoes as a side, and it comes with a nice side salad. I usually end up getting the chicken enchiladas (NT$280) anytime I end up at Eddy's Cantina and they always hit the spot with the slightly sweet red enchilada sauce and gooey cheese. 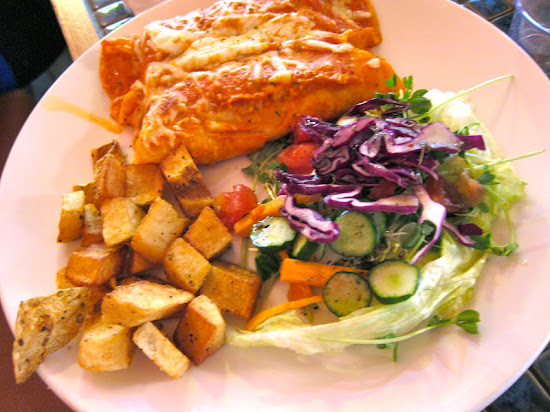 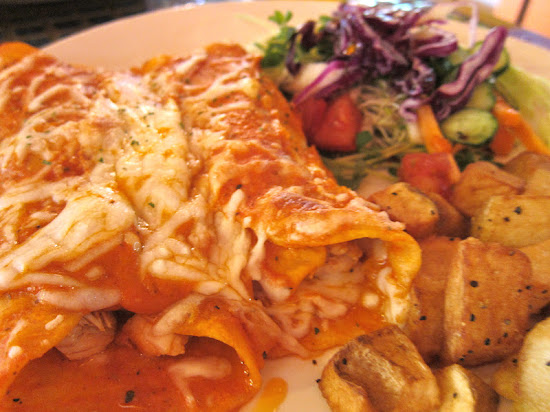 Many of my friends hadn't had mexican food in a long time and enjoyed their orders- beef chimichanga (NT$230), which is like a massive deep fried burrito that can be shared... 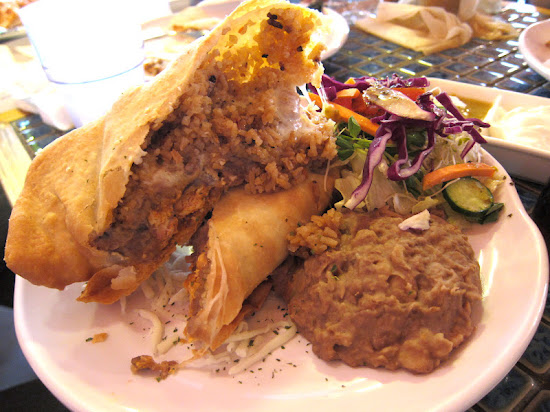 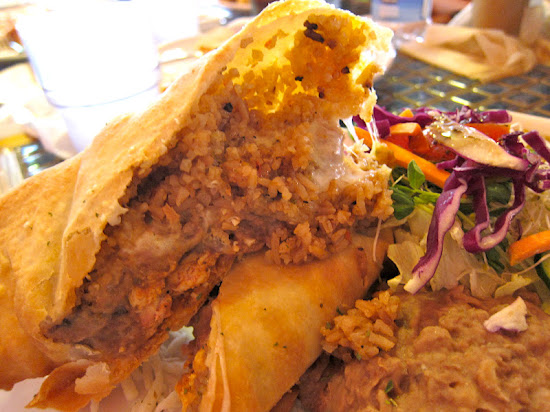 chicken quesadilla, which my friend tried to cut up to share... 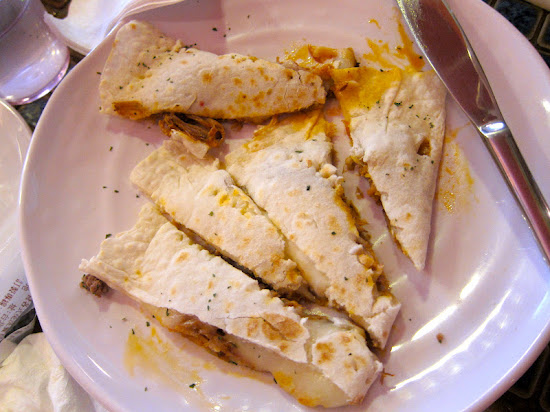 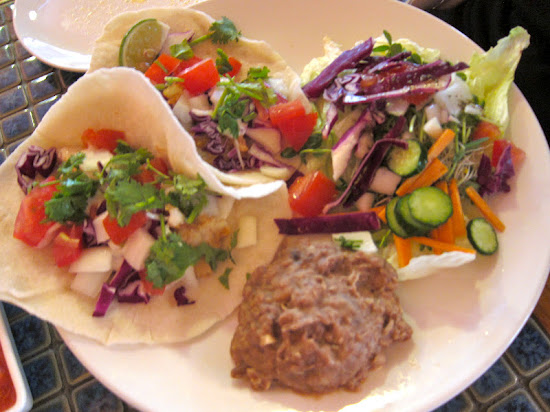 The Mexican food landscape has evolved and changed a lot since Eddy's Cantina first opened (and closed) shop in Danshui, when I reviewed it in 2008.  For quick fixes, there are other options in Taipei now (I prefer the California baja style of burritos and fish tacos with corn tortillas at Macho Tacos, but when I'm craving enchiladas, I head to Eddy's), but for a sit down meal, Eddy's still is a good option especially those in Tienmu.
Posted by joanh at 12:27 PM

Ya, too late, I already went to Danshui and met with the disappointment that it was closed. Came home and checked their facebook to find the news. Fortunately that wasn't the only reason I was in Danshui.

But big thumbs up for the Tienmu operation. Very cozy and I haven't once been disappointed in the food.

Do the nachos have sour cream and guac? I've found both Macho Tacos and the new Good Day (Guangfu/Mingsheng) have decent nachos that bring on the happy.

Nachos look delicious. Sadly there are no foods like this in my city. Even ordering food delivery is out of the question.

Too bad they closed in Danshui - I was looking forward to making this my regular lunch place again, during my next "work from home" week this summer.

Their rice is really weird. Macho Tacos is better.

And I am a soo hungry reader of your blog,getting such a strong craving for the tempting dishes you showed us with these so gret pictures! I can imagine how the Mexican food tastes if you have not had if for a long time as myself and i would simply kill for a piece of chicken quesadilla!

koji: sorry!!! haha, glad you found the location.. i think it does come with sour cream. the nachos at the diner come w/ good guac

stefan: yeah.. it's too bad

anonymous: yeah it's hard to compare after macho tacos opened

Your pictures look delicious and i made the journey up there to be sorely disappointed. I'm not a snob when it comes to Mexican food, i'll eat anything, but at Eddy's Cantina i felt like i was eating italian food. The chicken enchiladas tasted like marinara sauce, and had the consistency of large raviolis. The decor is legit, but the food not up to par. The salsa they provided on the side was mildly spicy, but not nearly enough to cover the whole plate. The rice was over done, but the horchata was tasty on a hot day.

Have to second ABQ's review. The food is really overpriced and the quality is questionable at best. Nothing close to the "authentic Mexican" they promise. Do not waste your time!

I have been to the Dansui restaurant 4 times. I haven't been there in over a year. My review-The tacos are very good and very authentic. Everything else I had was ok at best. The beans were always too try and tasteless, and I did not care for the rice. Authentic Mexican rice can be the best in the world, in my opinion, and Eddy needs to learn to make good rice and good beans. The rice and beans bring down the whole menu. Because of this, the chimichangas are not good at all. Even though Mexican food is my absolute favorite food in the world, I am in no hurry to go back. I will give it another try one of these days.

They don't have guac! The nachos are good but agree that the Rest of the food is so so.

This is easily the worst Mexican food I have ever had.

Not mentioning price, the quality and taste of the food we received was completely a joke. The burrito that I had ordered was 75-80% rice, which turned out to be flavorless. Was about 240nt for just the rice burrito that might of had meat hidden in there.

Buddy ordered a chicken plate that had five pieces of chicken.

Place is completely garbage. Putting hot sauce on your fried rice would be more mexican.