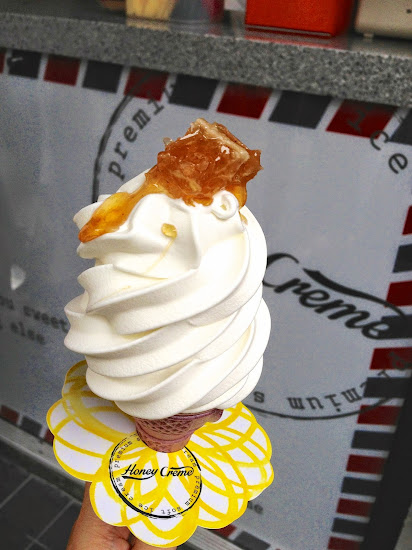 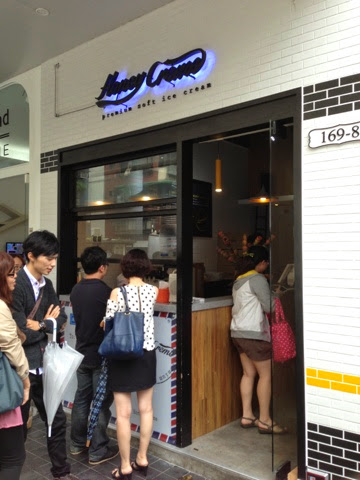 If Honey Creme had NT$150 for every person that was curious about their glistening honeycomb soft serve ice cream, then they'd be rich. I suppose that's the idea. A rebranded version of Softree's soft serve from Korea, Honey Creme had lines around the block early on when it opened and it was not even summer yet. Even when I went in drizzly gray March, there were people lingering and eating their cones outside, though you could just walk in and order your ice cream. Was it the honey comb? Was it the craze for everything Korean because of the Korean soap You Who Came From the Stars? Was it just because people in Taipei LOVE to wait in line?

With the soft serve wars going down in Taipei, you could opt for a cone at 7-11 or Family Mart that would be less than half the price and just as tasty (with Matcha, Mango, Strawberry or flavor of the moment), or at Godiva, Gakuden or maybe your neighboring bakery. But then you wouldn't have the honeycomb- is it worth the extra dinero? 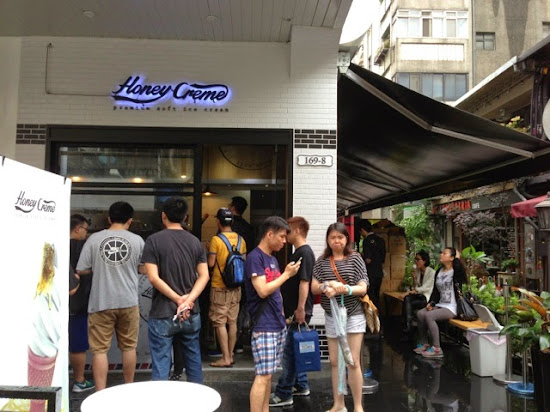 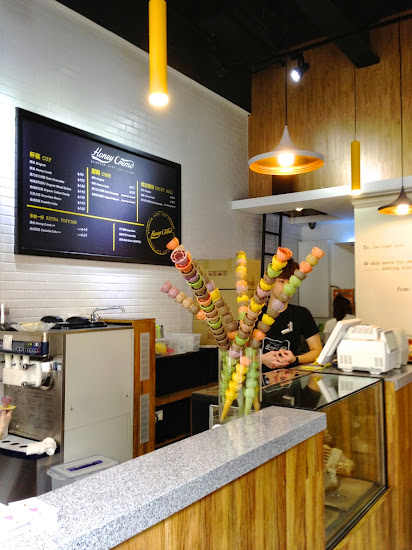 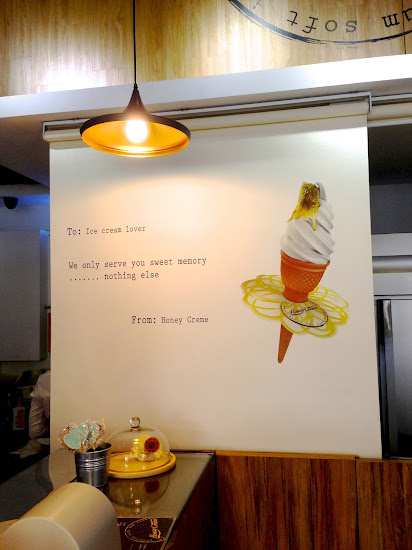 I think part of Honey Creme's success is the design of the store and elements- everything is so photogenic and instagrammable. After all, that is how I started seeing a flurry of photos of colorful cones stacked up high, piles of honeycomb under the glass counter and perfectly swirled vanilla topped with a mini honeycomb chip on instagram. Otherwise, who would choose to pay US$5 for ONE soft serve cone (outside a theme park or restaurant).? 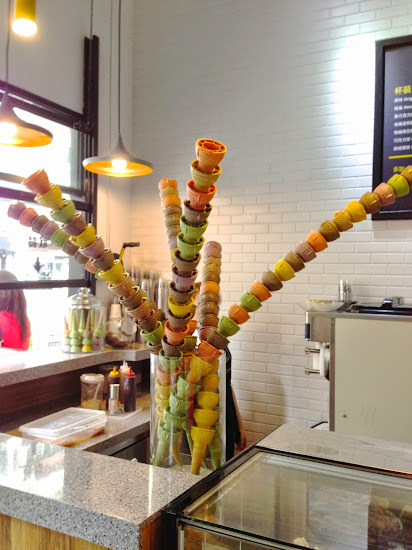 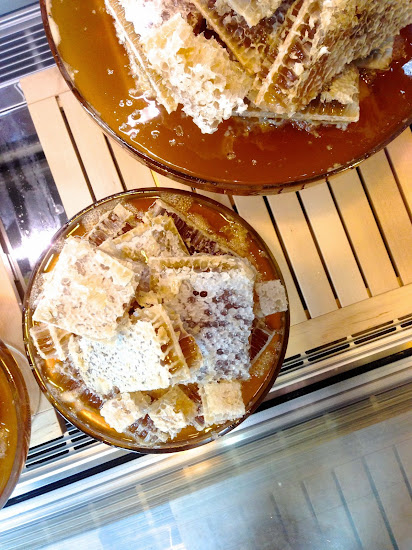 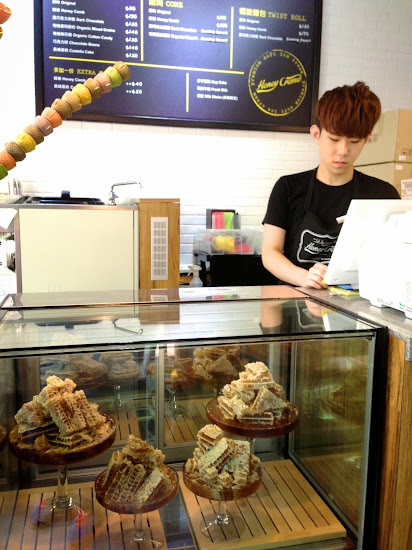 You can get the ice cream in a cup or a cone, from NT$110 plain to NT$170 for the ice cream in a pastry like twist roll and honey comb. There's also options for organic (?!) cotton candy, chocolate beans, honey castella cake or dark chocolate sauce toppings. There's only one vanilla ice cream flavor to choose from, which is rich and milky, like the hokkaido milk soft serve I've tried from Costco, but less intense. 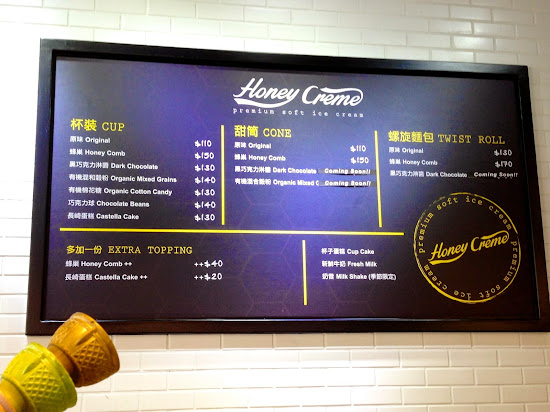 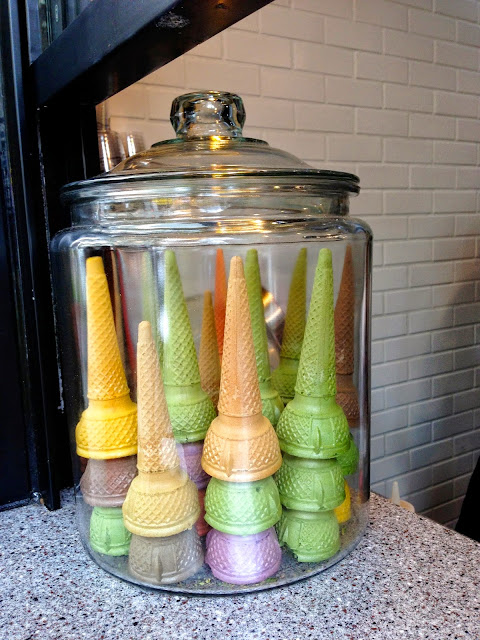 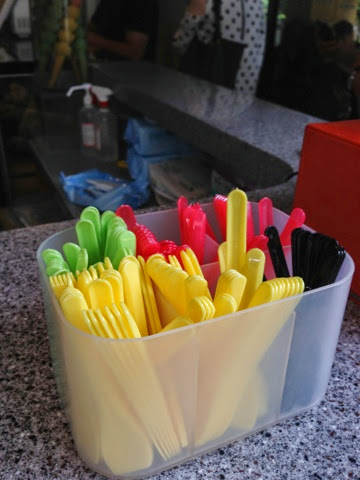 After you order and pay, the next server will make your order to deliver to the pick up window. I stuck to the classic Honey Comb in a cone (NT$150), which she expertly swirled high on the skinny colorful cone. 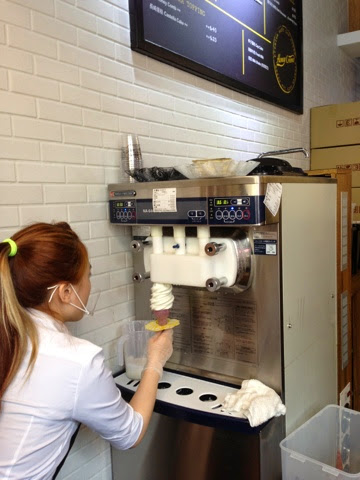 A small chunk delicately set atop from a box of precut honeycombs. 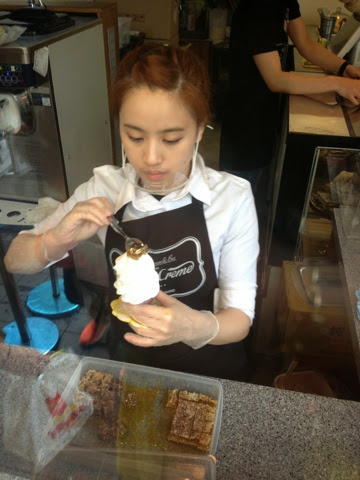 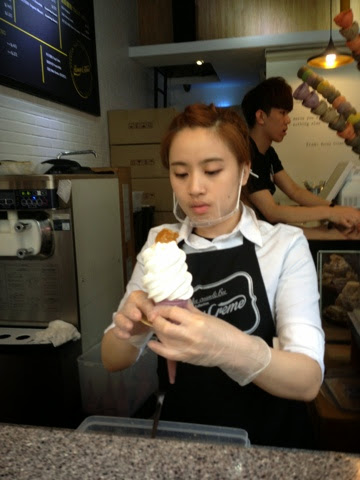 The yellow cardboard cutout at the base of the cone is a great idea for catching melty drips that are bound to happen in the hot Taipei weather. 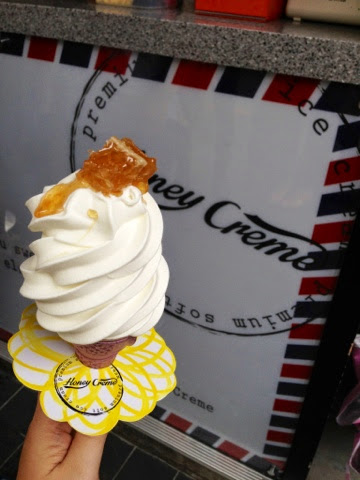 Finally!! I get to try it after seeing it for weeks on friends' timelines and instagrams. 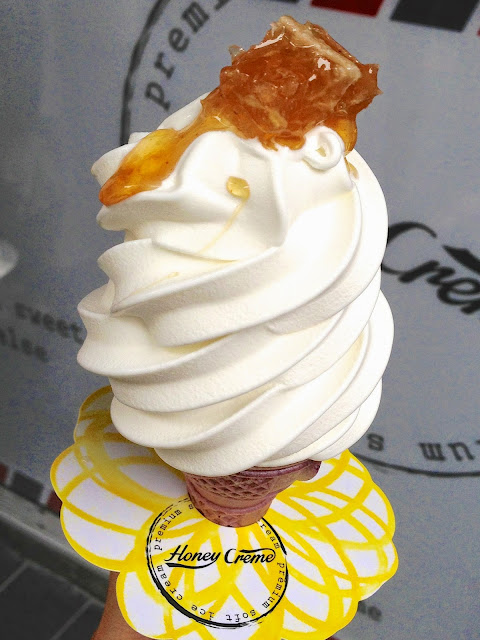 The honey itself had a nice flavor and sweetness, though I kind of wished there was a bit more of it. At Softree in Seoul, which I tried in March, they were actually out of the honeycombs (which they called honey chips) and so have an option where you just get honey. Obviously that's not as hard to replicate at home and not as cool looking, but to be honest the honeycomb itself was waxy and not edible. If you suck all the honey out, then it's a bit messy. At first, I tried chewing it expecting it to be a bit crunchy, but instead it was soft and waxy and then I had bits I had to spit out. So I'm glad I gave it a try, but it's too pricey to be a regular treat. 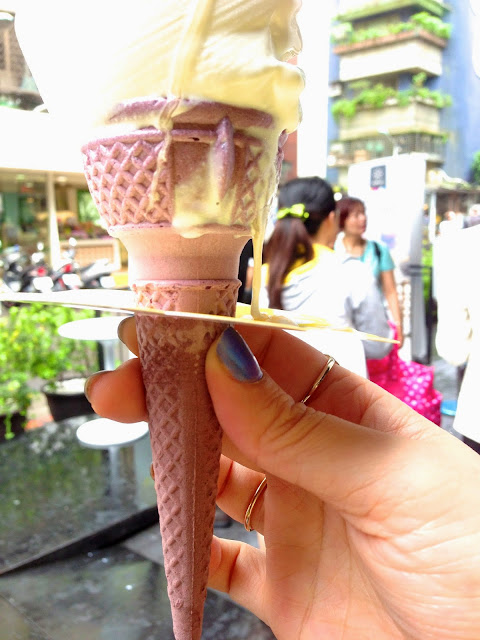 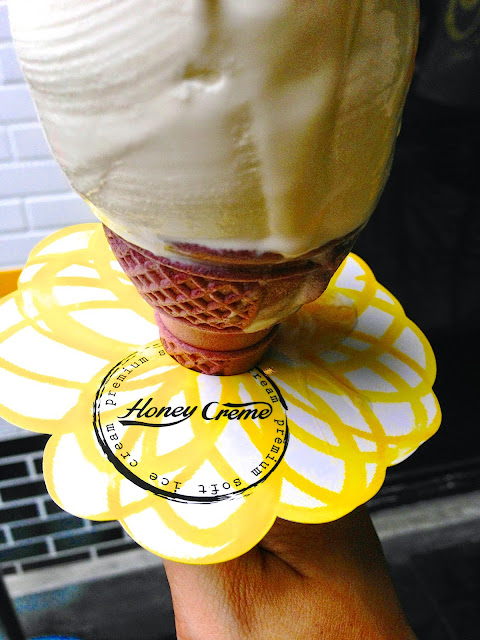 Before I left for LA, I spotted a branch of the OG Softree from Korea opened up in Taipei at ATT4Fun with less fanfare (and no lines) so it's interesting how marketing (and branding) plays a factor into the success of a dessert shop. Honey Creme is definitely more pretty and enticing, while the Softree location looked less appetizing (even their honey chips were not as beautifully presented). I wouldn't have even noticed it except that I had recognized their signage from visiting the Korean Shop and researching them when Honey Creme had opened. Interesting to see if it will ever blow up in the same way. 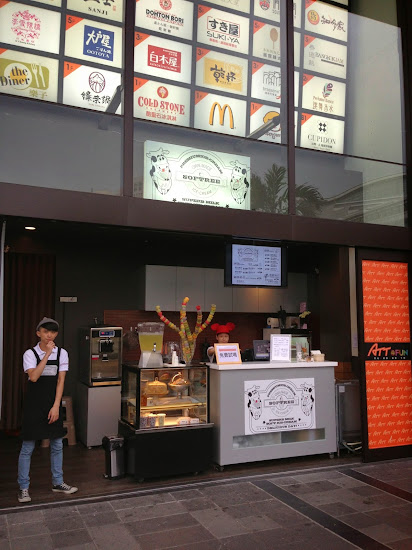 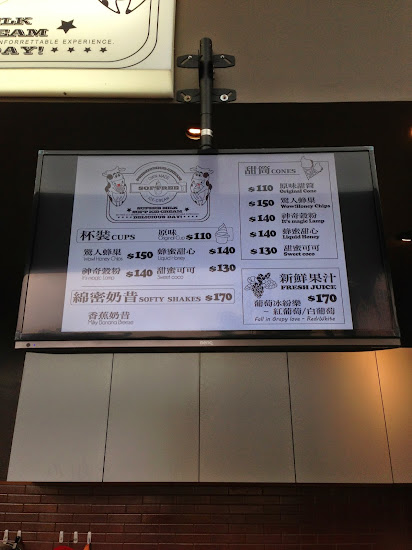 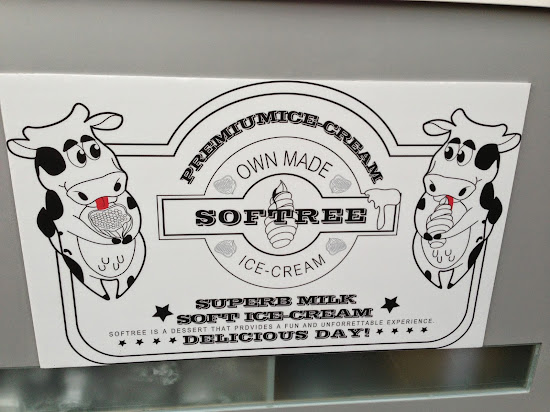 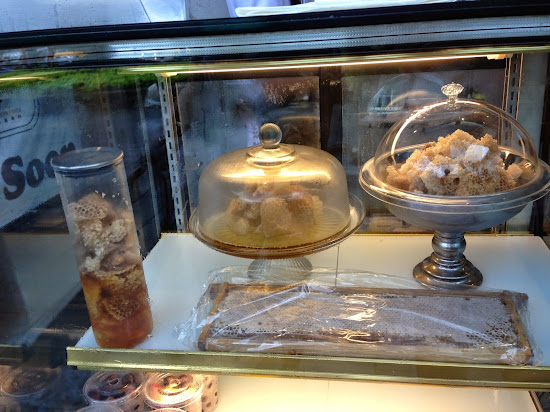 But if it doesn't, we'll have Honey Creme to fulfill our honeycomb ice cream desires.
Posted by joanh at 11:05 AM

They have a similar thing in k-town in LA at a place called Honeymee!

agree completely, not worth the price of admission. good thing there are so many young girls foolish enough to buy this crap.