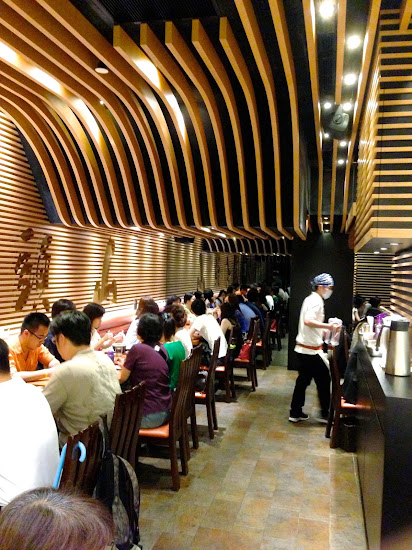 Kid friendliness: no high chairs spotted, but kids should like ramen, pork cutlet and fried dumplings 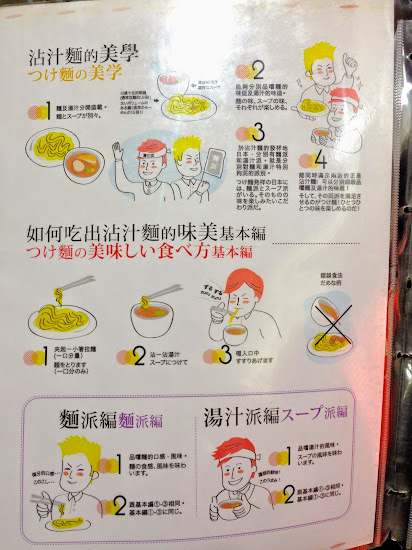 Be prepared to wait. I wasn't prepared for the 20 minute or so wait for Santouka, since I assumed the hype had died down, but there they were, 10 or so people standing in line in front of me for a late weekday lunch at 1PM. If you expect a wait, and there isn't one, then it's a happy surprise. So by the time I sat down, I was ready to order, ready to eat. 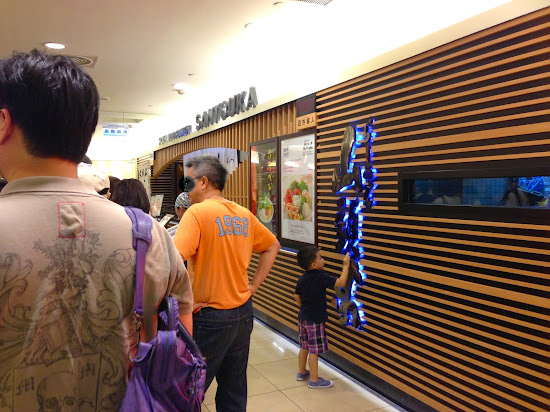 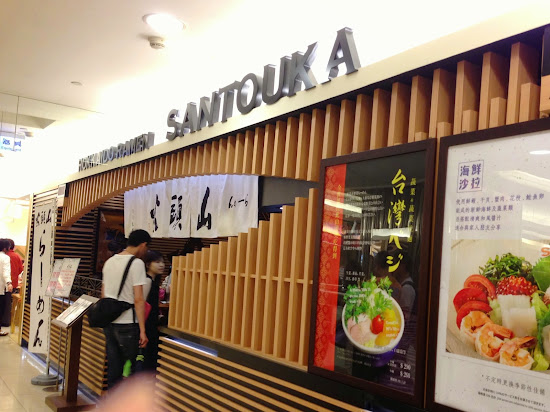 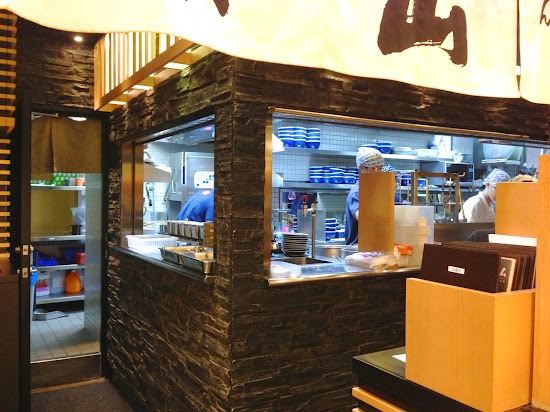 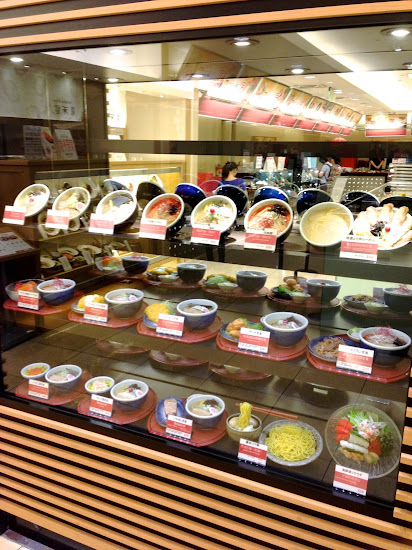 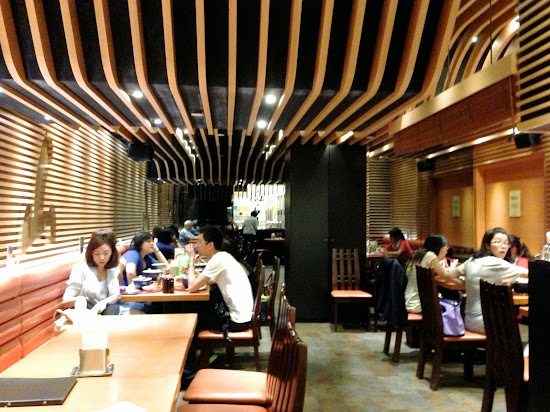 The first time I tried Santouka was in Los Angeles, at Mitsuwa, a chain of Japanese supermarkets in the US. Yelp and word of mouth already made it a place for legit ramen on the westside, so there were lots of people in line at this random supermarket food court. So there I expected a wait. I struck up a conversation with the tall, blonde guy in front of me and he said, "You must order the spicy miso ramen." So I did. The spiciness and saltiness of the broth was great, even though the deep red color was intimidating. So it was with high expectations I tried Santouka in Taipei, which supposedly had four hour waits when it first opened in 2012.

The Santouka Taipei menu is quite similar with shio (salt), shoyu (soy sauce), miso, hot miso ramen, tsukemen, or cold ramens, or order a la carte or combos with fried pork tonkatsu, fried chicken, gyoza or a small salmon sashimi rice bowl chirashi. Prices range from NT$200-NT$320 for noodles, and you can choose regular, small or large sized bowls. The menu has some English and photos, but is mostly in Chinese and Japanese. And if you really love meat, then try the toroniku ramen, which comes with a plate of simmered pork cheek slices. 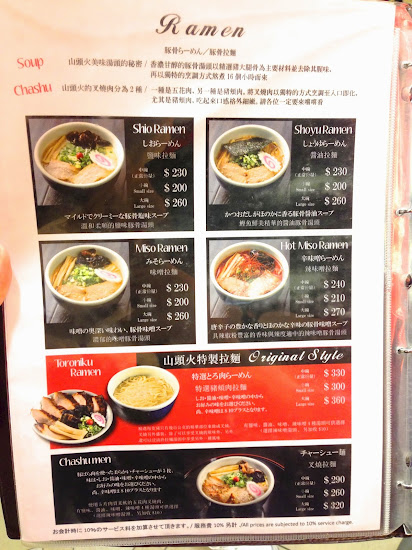 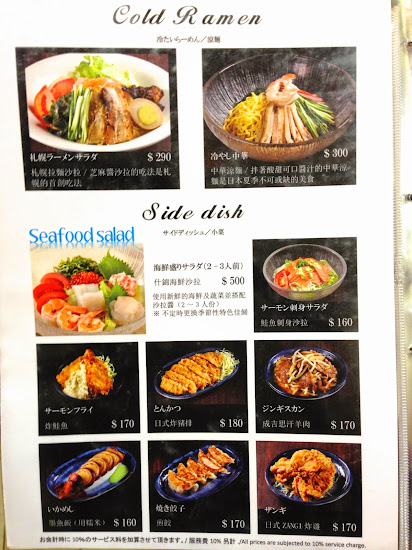 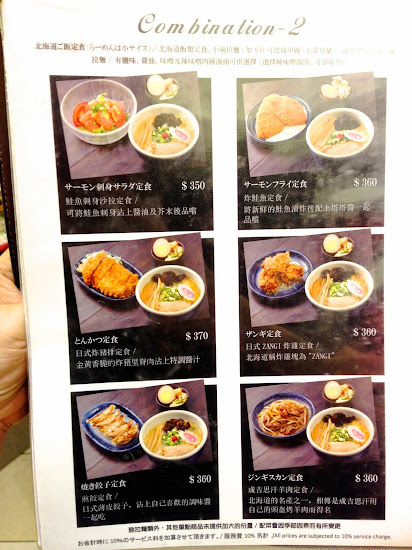 That day I opted for a cold ramen (NT$300) which is comes with julienned cucumbers, ham, cold pork and a shrimp on a bed of cold ramen with a vinegary sauce. After my first few bites, I regretted ordering it because I'm not a fan of cold char siu pork and this was basically the main element of Santouka's cold ramen (unlike some cold ramens that also have egg, carrots, tomato or chicken). WHY DID I NOT ORDER THE SPICY MISO RAMEN? DOH! The toppings and sauce were kind of skimpy for the price, and in proportion to the ramen, and the meat was kind of dry. But I didn't look at the menu carefully and the details of the dish were in Chinese, so it was my bad. 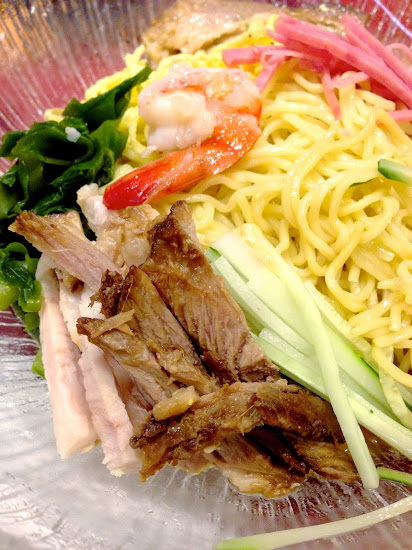 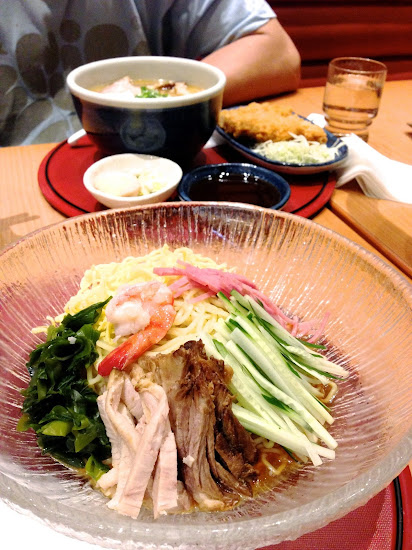 Luckily, my dad got a miso ramen combo (NT$370) which came with a small sized ramen and a fried tonkatsu. It was mostly good except the egg was a dry yolked hard boiled egg, not the gooey soft boiled egg we are used to seeing in ramen egg-porn. WHY DID I NOT ORDER THE SPICY MISO RAMEN?!! With pork bone broth boiled for over 20 hours?? 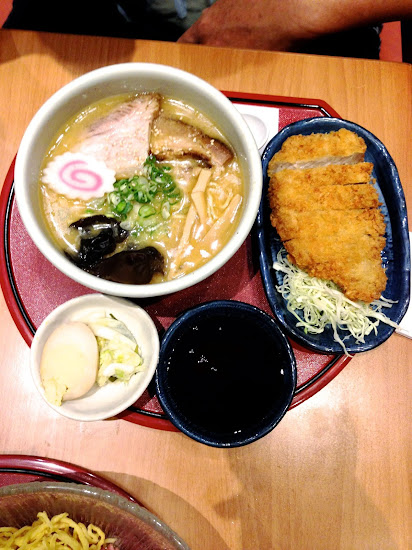 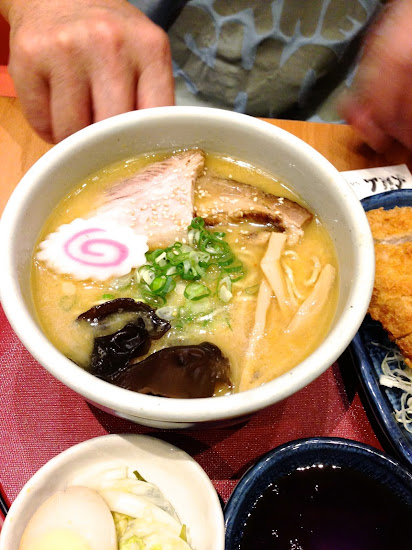 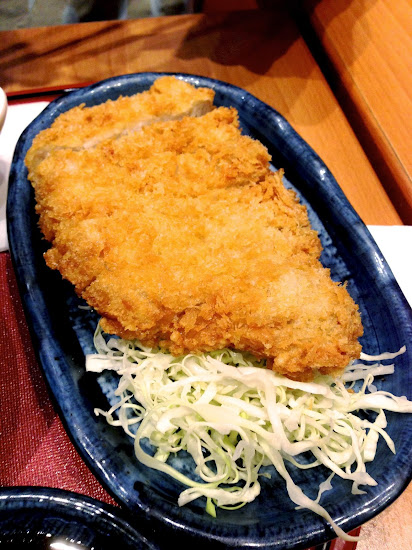 I also have to note that service was incredibly slow. We probably waited nearly 15 minutes after sitting down, even after preordering while waiting in line for over 10 minutes, and got our food after the people next to us, who sat down after we did. So I was a bit hungry and annoyed throughout this lunch, which is never a fun experience. But luckily my dad is the best and he shared some of his soupy ramen with me. Thanks Dad! 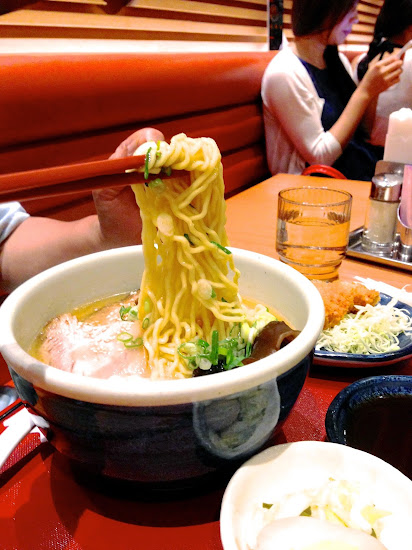 Santouka's miso ramen was one of my favourites when I lived in Tokyo. Their noodle and soup quality were excellent. IIRC, their miso was white (not as salty as red) and their noodles had body. Toppings (except maybe their bamboo, which was also excellent) were more standard - I can't quite recall if their chashu was special. I haven't had the chance to try the one in Taipei yet, but once I do, I'll post a comment here.

I take Santouka for granted since it is so readily available in California. I prefer Ippudo, although I can't speak to the one in Taipei Main Station. I always mean to try it when I'm back but I end up getting tempted by so many other things!