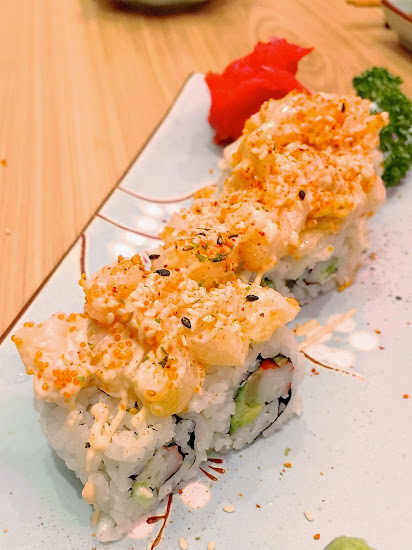 When Sumi Sushi closed shop last year, it was one of the few sushi bars serving American style rolls in Taipei that I liked. I had heard rumors that Chef Andy had moved back to Vancouver and I had guessed that customers found it difficult to find Sumi Sushi once it moved to a small alley near Ximending. So when I heard that Sumi Sushi had been reincarnated into a new Japanese restaurant in Xinyi District, Izumi by Sumi, I was happy and curious to give it a try.  Overall, if you liked Sumi Sushi's rolls before, you're pretty much getting the same thing, except with a higher price tag because of the swankier location (rent) and lounge bar environment. As before, you have to pick and choose certain rolls to get your money's worth if you're looking for size and value. But quite a few of you have asked me over the past few months about Sumi, so here's the address and a few photos to help you find it.

Located next to Brown Sugar in an office building a few blocks away from Taipei 101 and the surrounding shopping centers, you kind of have to know what you are looking for when you go. The signage is not easily noticeable and the windows outside blocked off with decorations, but there's a tv screen showing rotating images of sushi rolls to catch the eyes of those not familiar with Izumi. 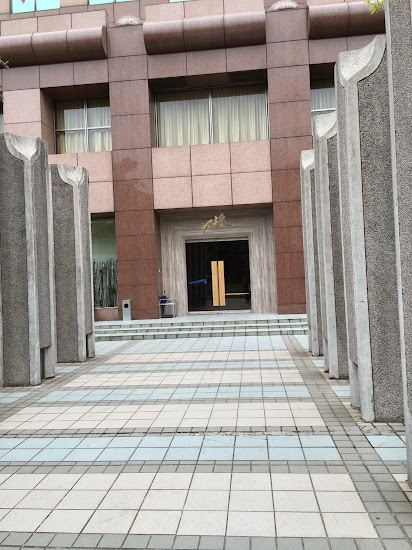 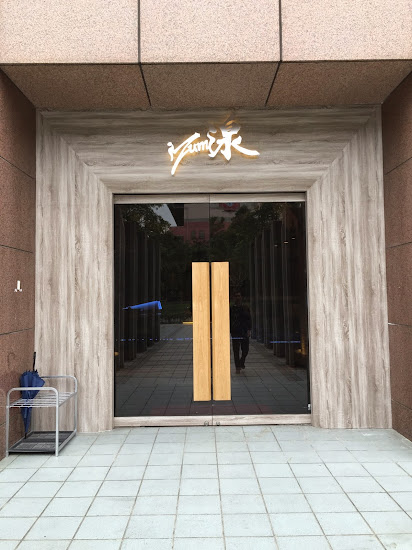 Once inside, I admired the decor and the new lounge bar atmosphere which was very different from the mom and pop sushi bar feeling that I had become used to at the previous locations. And as I went for lunch during Izumi's soft opening, it was empty except for our group of friends and I could only imagine the vibe at night with the dimmed lights and loud music. You could imagine this being the setting for a trendy sushi restaurant in Hollywood. 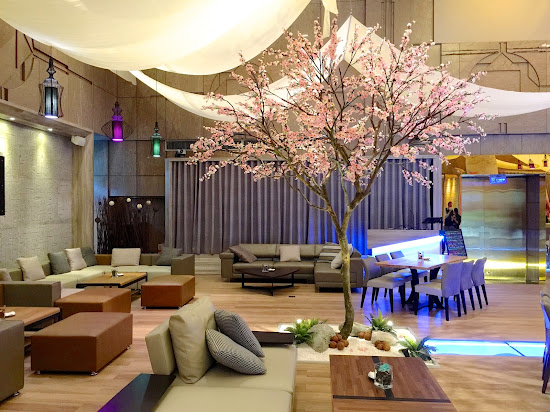 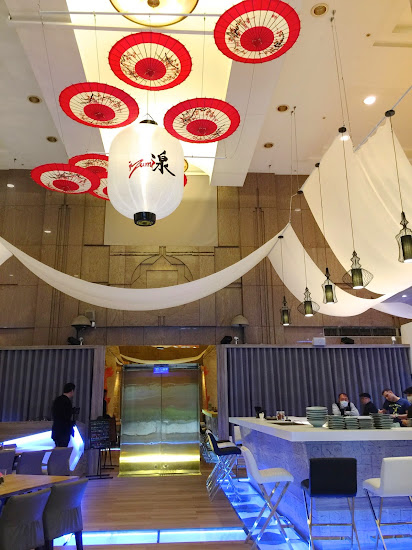 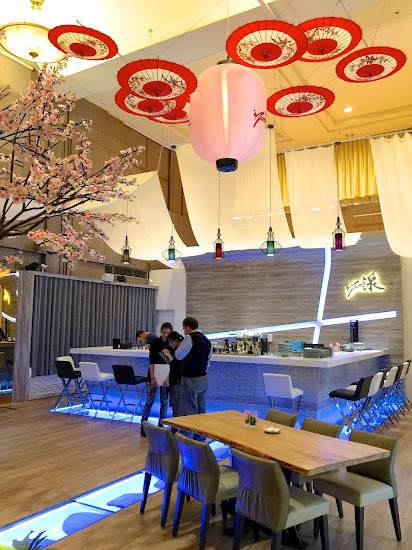 Along with sushi rolls, sashimi and nigiris are available, as well as some Thai dishes and Yakitori. There are over 20 rolls to choose from and we seemed to know more about the rolls than the new waitstaff when some of my friends asked questions about the other rolls. Again it was during the soft opening, so hopefully they'll have pictures and more descriptions for the sushi rolls, especially since there are so many, there's bound to be questions about the different ingredients. I suggested that they take photos and put it on an iPad so people could browse and see photos that way. 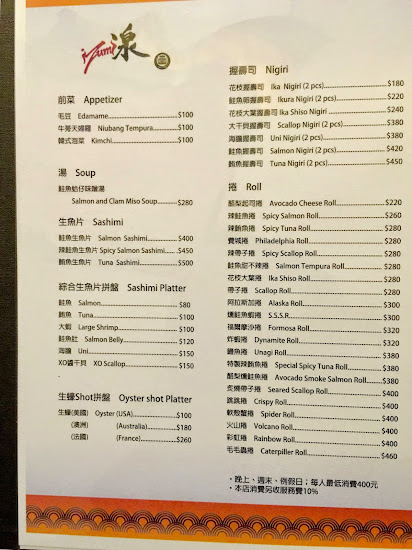 We were a hungry bunch and anxiously awaiting the food, and with only Chef Andy making the food, it can be a long wait. When we asked, he said he will be training others to also make sushi, which will be necessary with the larger capacity. So one of the first things to come to the table and that we ordered again was the salmon (NT$400) and spicy salmon sashimi (NT$450). The salmon sashimi came in thicker cut slices while the spicy salmon were cubes of sashimi covered a sauce that was a mix of spicy and sweet. 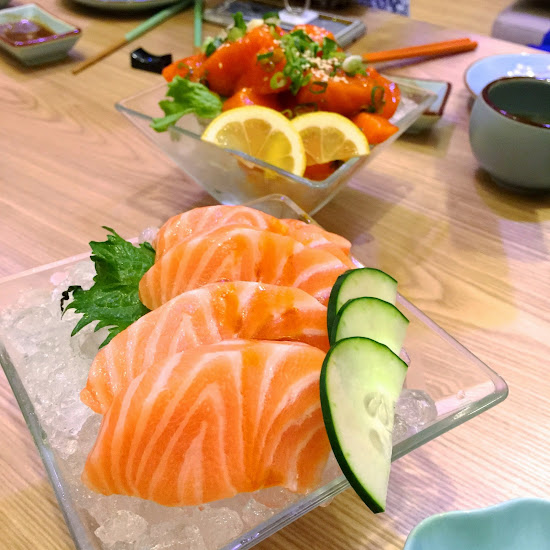 My favorite rolls that I suggest ordering are the Crispy roll (NT$400) which is a california roll covered with scallops with mayo sauce and roe and tempura flakes for the crunch (thus the name crispy roll). 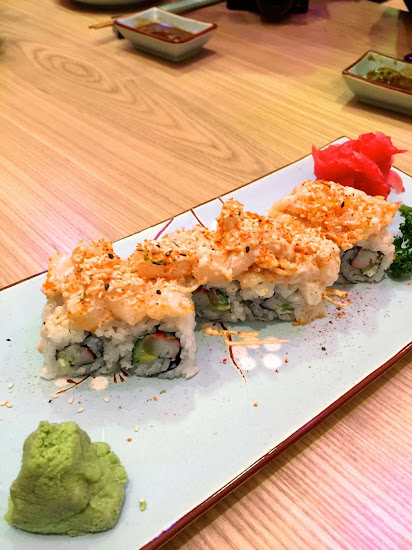 Choose this over the spicy scallop roll (NT$280) which is tiny in comparison even next to the side dishes - edamame NT$100, Niubang tempura NT$100 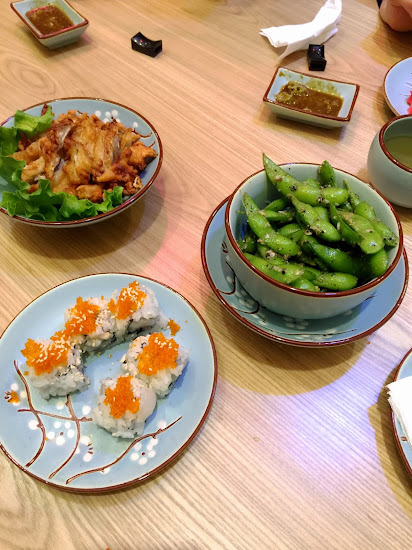 I also like the Sumi Sushi roll (NT$500) which is one of the bigger rolls with smoked salmon, eel and  and the whole thing is deep fried for a crispy tempura exterior. 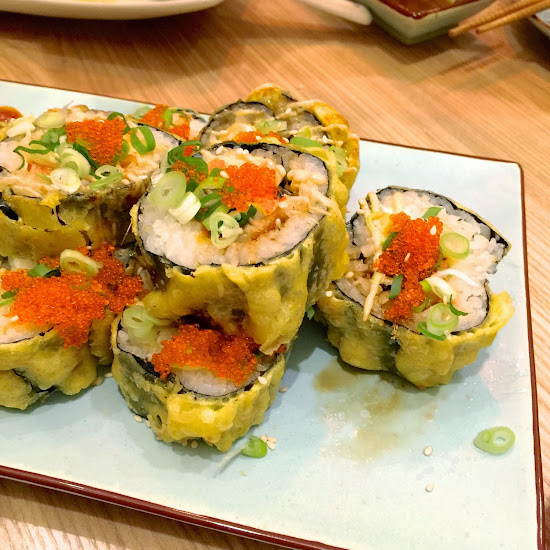 Spider roll (NT$400) is always one of my favorites. I felt like it needed more eel sauce that day, so we asked for some more on the side. The Spider roll and Sumi rolls are some of the bigger rolls, which are more filling than some of the bite sized rolls that are available for the same price. 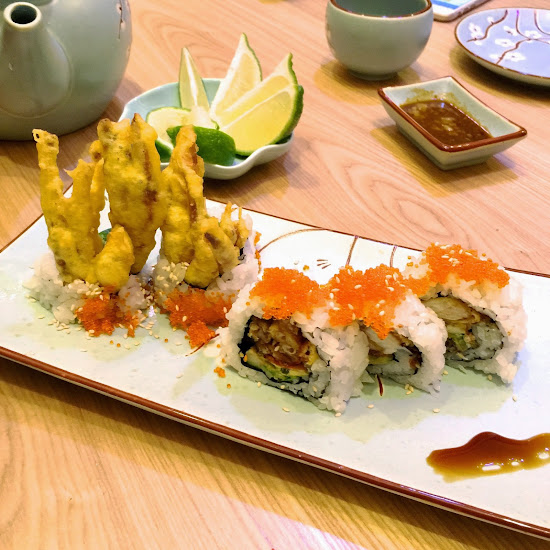 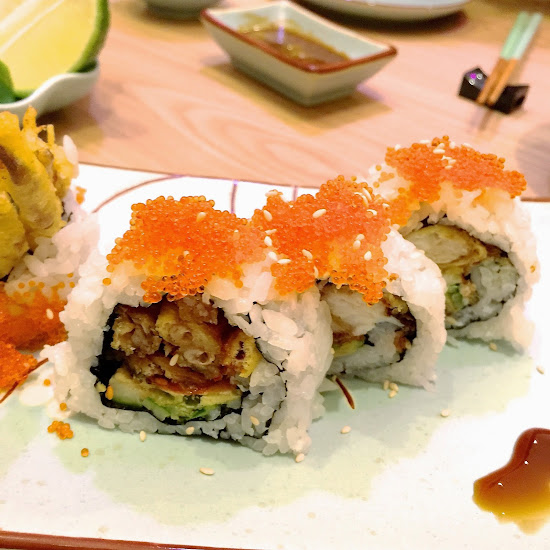 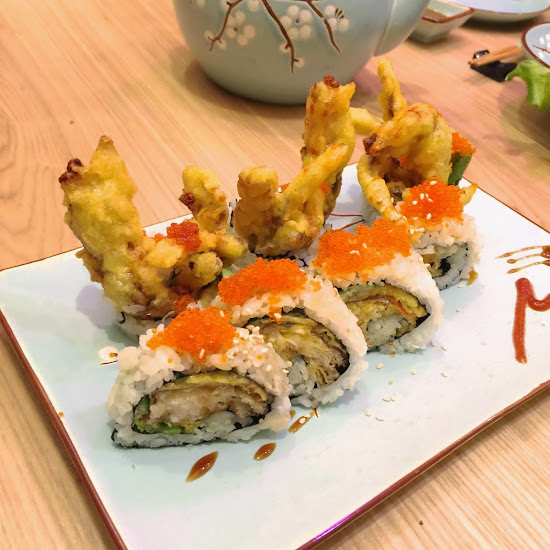 Get a group of friends together to share rolls, then you can try different kinds. The presentation of most of the rolls were pretty much the same as it was at the previous Sumi Sushi. It'll be interesting to see if Izumi by Sumi make their presentation and rolls more trendy looking as time passes to match its trendy decor and vibe.

Volcano Roll (NT$400) also with scallop, crab, cucumber, avocado so similar to Crispy Roll, but no crunch and more sauce. 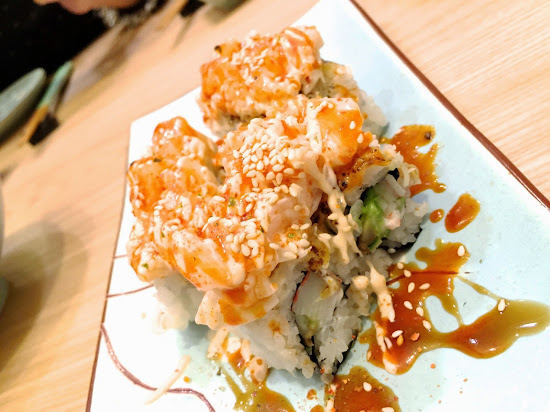 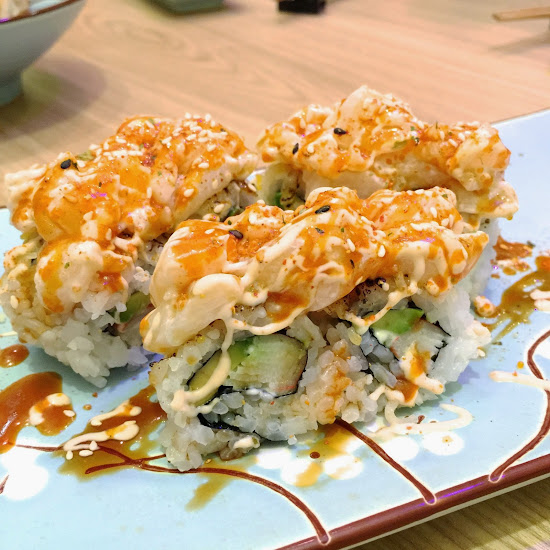 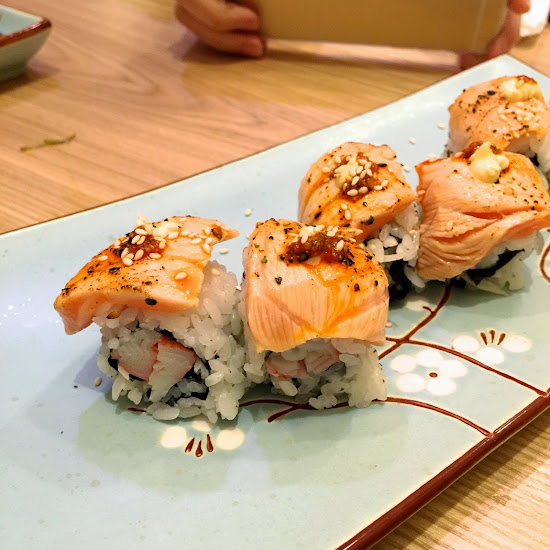 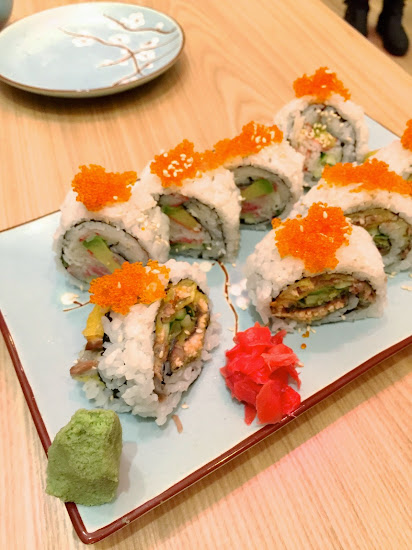 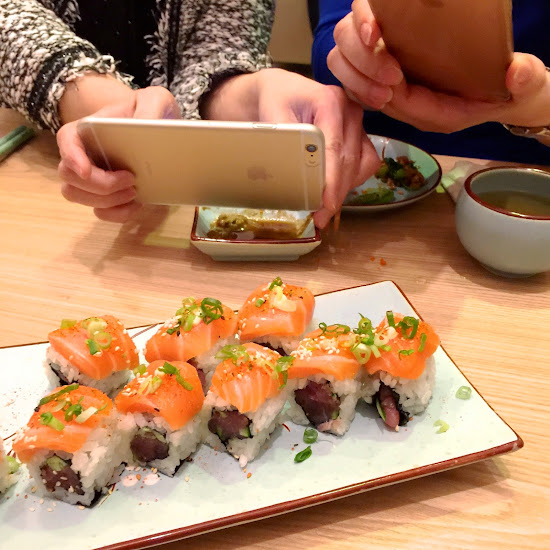 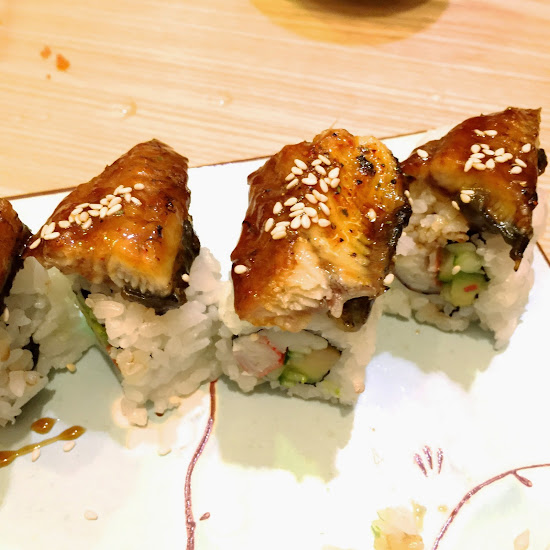 Thai stir fried pork and green beans (NT$320)
It's kind of random that there is Thai food on the menu, but a good spicy side dish to go with all the rice. Fits into the fusion menu and atmosphere of Izumi by Sumi. 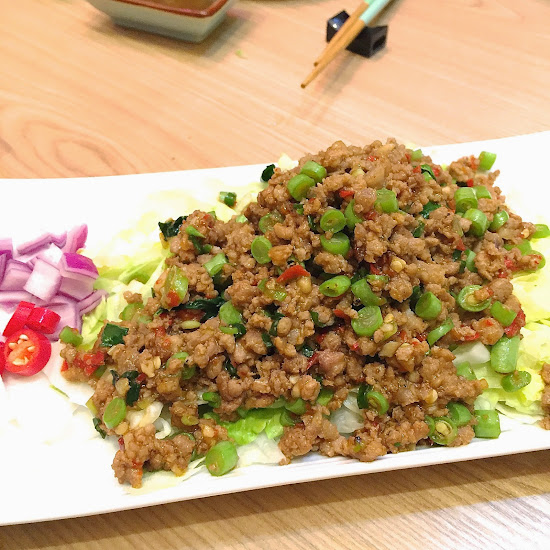 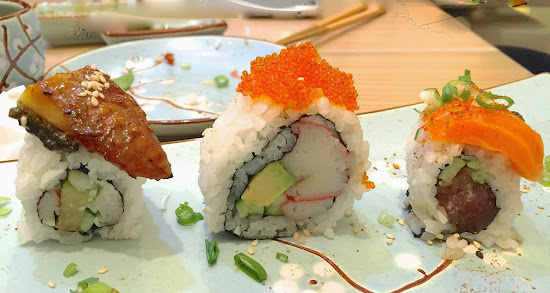 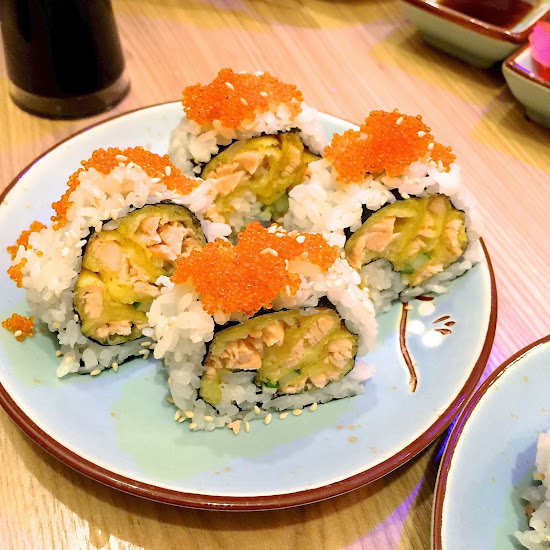 I know it's quality over quantity when it comes to sushi, but with rolls, I can't help but to yearn for the type of huge rolls I ate with gluttony back in the states. Next time, I'm going to ask for some of my favorite roll combinations from back home-- deep fried salmon with avocado and crab with masago atop or spicy tuna piled atop crispy rice.

To be honest, before I moved to Taipei, I was pretty clueless about sushi and that's probably why I loved sushi rolls so much. Now I know the difference between a good and not so good piece of fish and where to find good chirashis and omakases in Taipei, it's hard to justify paying the same NT$400-500 amount for one roll (and need two to three rolls to be full) vs one heaping chirashi bowl with more fish inside it.

But I can't help but to crave for rolls once in awhile and Izumi by Sumi would be a good spot for a girls' night out or a group dinner, especially when the focus isn't on food but on hanging out and drinking. I only know of a handful of places that do sushi rolls well (NCIS,  A Plus, Ton 28 Sushi, Sumie at San Want, Kura Sushi) and I've had some horrible experiences when trying new places, so Izumi will be a familiar sight to fans of Sumi Sushi.
Posted by joanh at 12:00 PM

Lovely photos, and the food presentations are very nice.

Went to the new Izumi by Sumi Sushi. Definitely like a sushi lounge bar in Los Angeles. Huge space, high ceilings, lights down low, house music playing in the background, cool back-lit menus, and couches. The rolls are like the old Sumi. They have a bbq section on the menu. We had the beef with cod roe which was good. New prices do reflect the location. Best Western style rolls in Taipei.

Really weird that they closed Sumi to open this place. They rebranded it and everything. Not sure why. But I'll check it out sometime this month.

I went this evening. Probably the worst sushi I've ever had. Really disappointing. Worst sushi in Taipei...