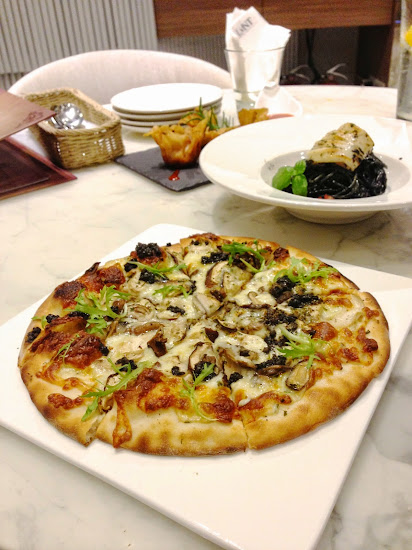 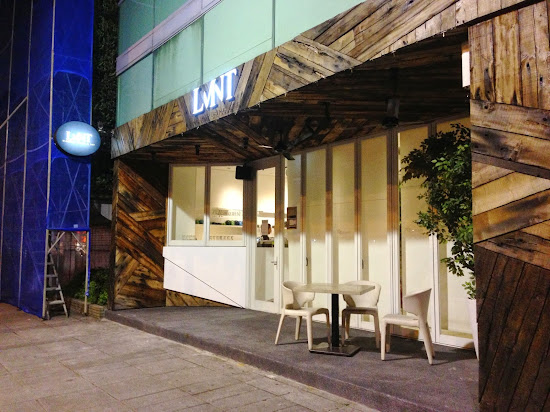 Neo 19, like the rest of Taipei's restaurant scene, has changed a lot since I first moved back to Taipei almost 10 years ago. Gone are Macaroni Grill, Just In Bistro, Dazzling Champagne Lounge Bar, Watami, Azabu Sabo (that's for you really old school readers), Jogoya buffet, Happy Hong Kong (sad face)-- Now currently replaced by Lighthouse Cafe, Warugaki Ramen, LMNT Drink and Eat, Nike's 2F, Very Thai, Hutong, Shanghai Tea House... So when I saw construction at LMNT Eat, my first thought was damn, I didn't get to write up my post from when I went last year in December and my second thought was another bites the dust. But I was wrong- LMNT was just getting a facelift and remodel. And luckily I was invited to the soft opening event for food bloggers to try out their new menu.

Inside, the front area is more lounge-y to transform from day to night and LMNT Eat can be sectioned off into two areas. 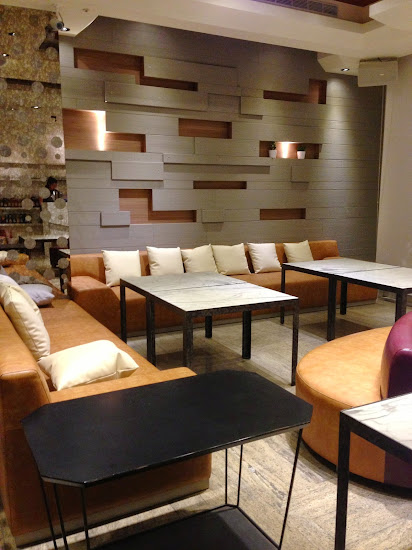 It was definitely more roomy and the tables had more breathing room between groups. 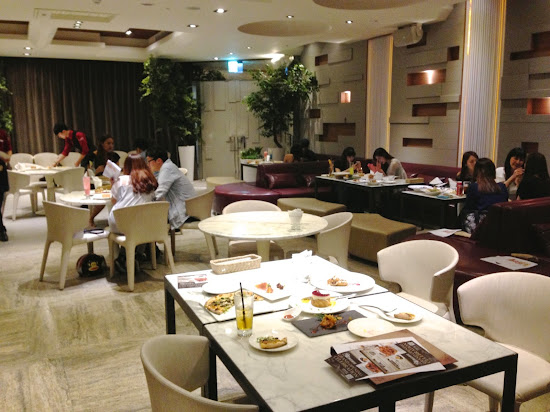 LMNT Eat's new menu is focused on their pizzas and pastas, but still has a selection of tempting appetizers and dishes that reflect a trendy fusion spirit that we saw on their previous menu. So instead of ramen burgers, there are now kimchi fried wontons, peanut butter pineapple burgers, or loco moco. I was happy to see they also kept their red velvet waffles and cake as desserts on their new menu, but bummed to see the huge gooey mac and cheese was gone. 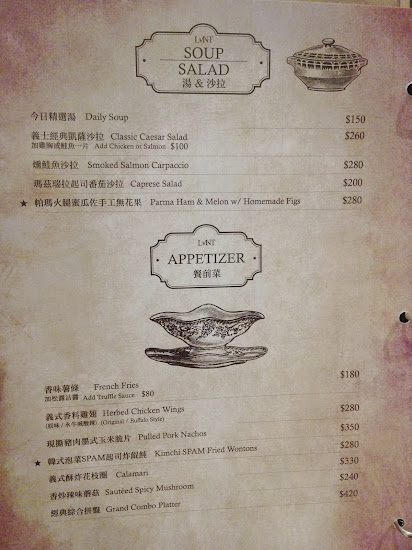 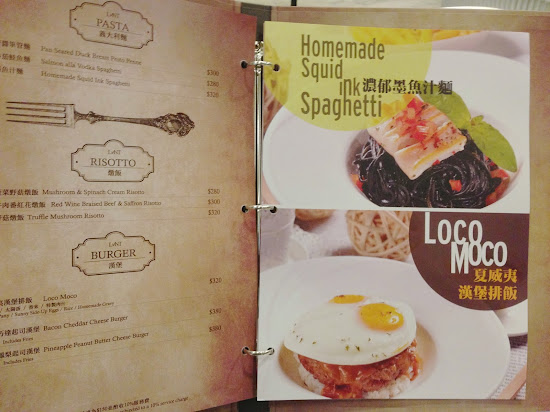 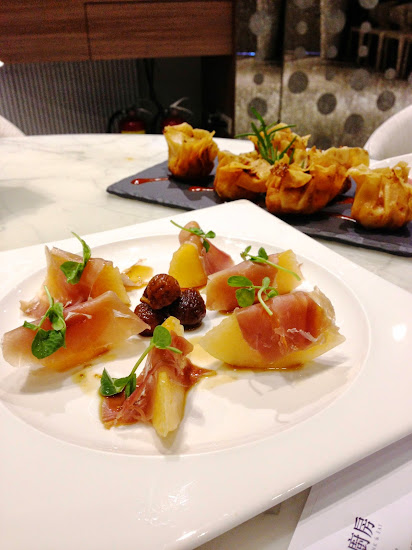 I liked the Kimchi Spam Fried Wontons (NT$280) and found them slightly addicting with the thin crispy wonton skin and the spicy sour filling inside. I didn't get spam in the first one, but I did in the second with chopped up pieces of kimchi cabbage.  There's also pulled pork nachos, chicken wings and fries with truffle sauce on the appetizer menu. 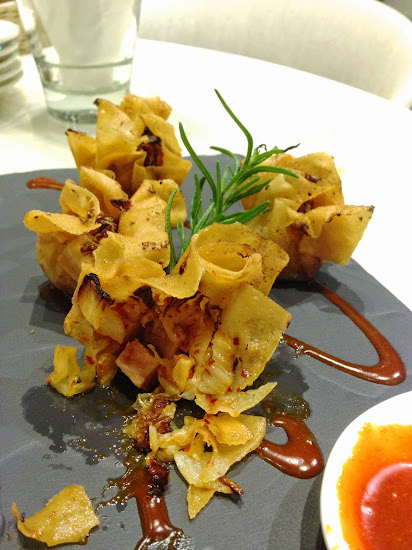 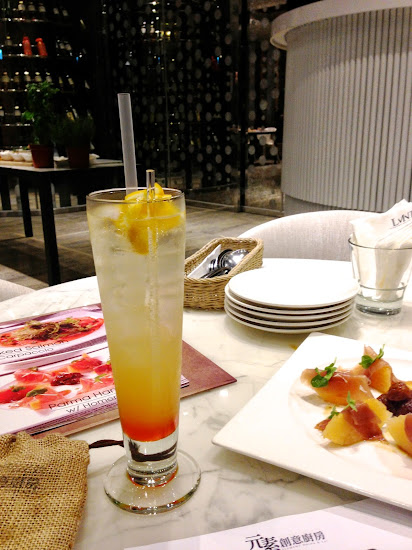 I really enjoyed the homemade squid ink spaghetti (NT$320)- the portion was huge, the al dente pasta was surprisingly flavorful for appearing to not have a lot of sauce and the squid was fresh and large enough to cut up and share. I couldn't finish this and took it home and it actually kept well the next day after reheating. I'd definitely order this again. 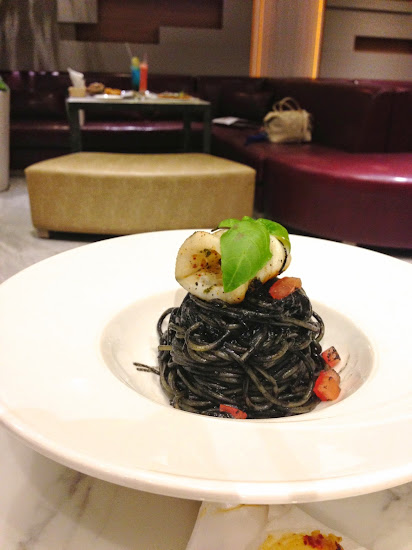 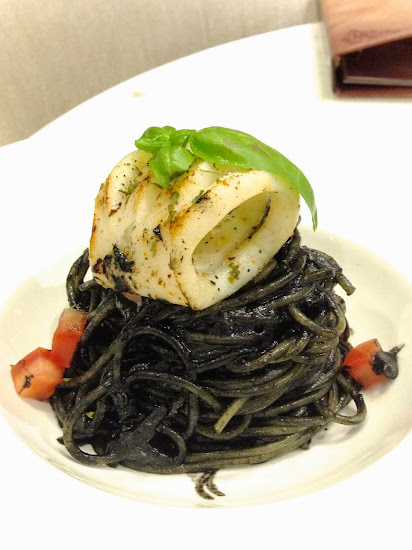 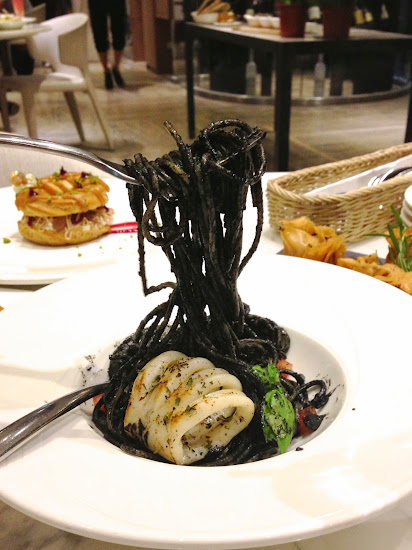 Always check yourself after eating squid ink pasta though! It's going to be messy.

We got a cool little packet from LMNT to make squid ink risotto at home. Still haven't had a chance to try it though... 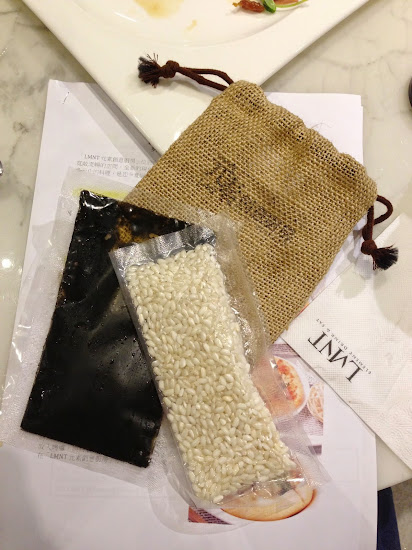 The fun thing about going to blogger events is seeing some of the chefs that you usually can't spy on in the kitchen and seeing how they prepare their special dishes. LMNT had one chef prep a pizza from pizza dough scratch and their dessert chef make both desserts we were given to taste. 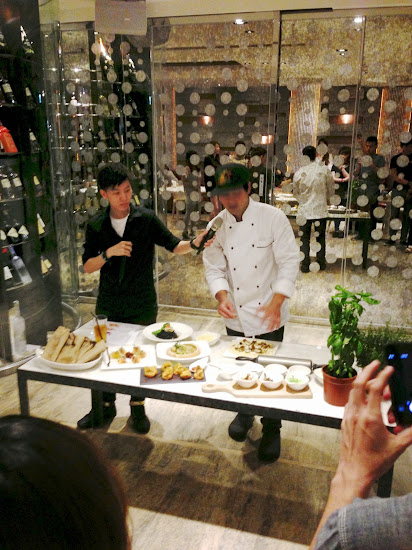 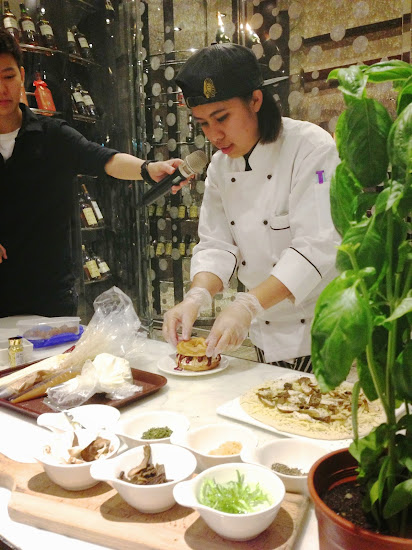 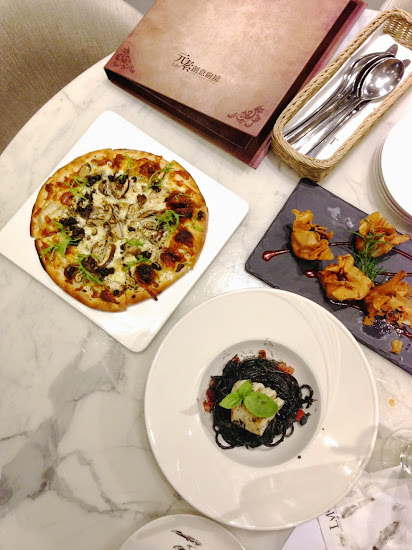 I liked the Truffle Mushroom Pizza (NT$300) too- the thin crust was not too crispy and the toppings were generous with four kinds of mushrooms- oyster, button, shiitake and porcino. You get a bit of the truffle aroma with the truffle oil and truffle bits, but at this price you aren't going to get shaved truffle atop (and you might not miss it). 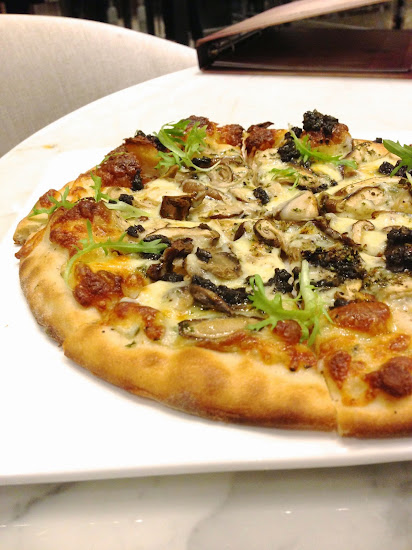 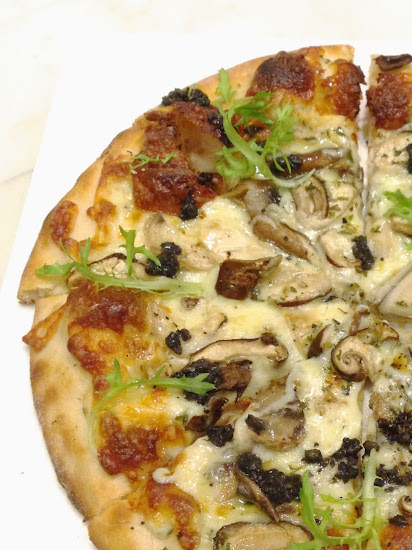 And while you have to admire LMNT for being adventurous in trying to make UFO deep dish pizza with Hungarian beef (NT$320) or seafood fillings, it's more a pizza "bowl" than the Chicago style deep dish pizza that I'd love to see make its way to Taipei. I'd say stick to the regular pizzas as I didn't love the cheese atop or the doughier version of the pizza bowl crust. 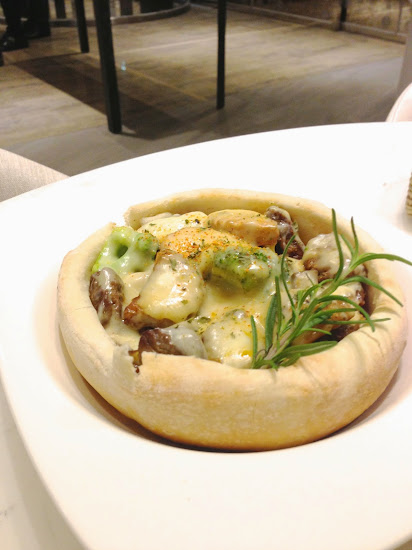 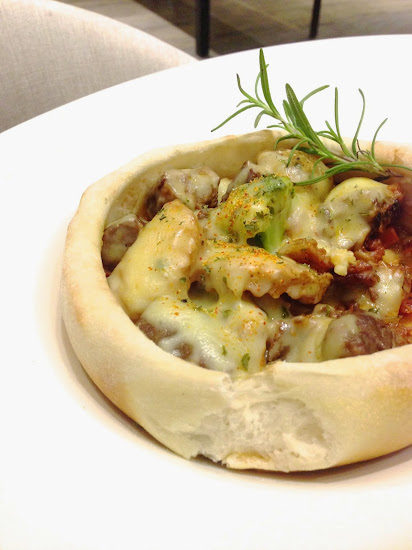 As for the desserts, they let us sample lychee berry mousse (NT$220)... 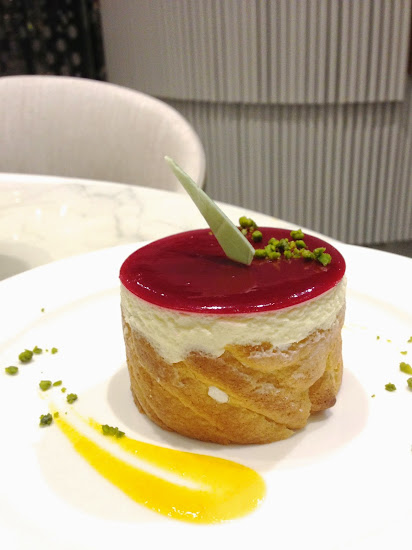 and chestnut berry shell eclair (NT$250), I unfortunately am not personally a huge fan of mousse or chestnuts, so I can't say accurately how the desserts were. I would recommend the red velvet waffles or give the caramel banana shell eclair a try next time though. 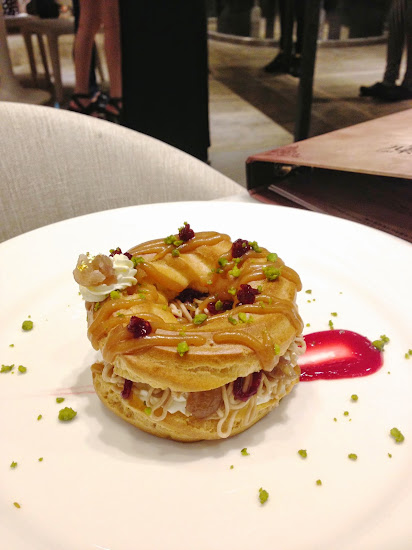 All in all, LMNT Eat did a great job with their revamp- besides the dishes they highlighted during the event, I saw a number of things that I'd like to come back and try myself (vodka pasta, truffle mushroom risotto). There's also omelette and two egg options for all day breakfast or a weekend brunch menu available. Thanks to LMNT for inviting me to the event!

Went there a while back and the food was terrible. Their "red velvet" cake was stale, hard and just plain nasty.

how much $$ they pay you to write this?

food there is shit, the so called Red Velvet is disgusting .....

anonymous 1 & 2: i don't disagree with you guys, i hated the red velvet cake when i tried it last year. but i wrote my review based on the food i tried at the relaunch, and it was better than my previous visits. so I didn't get paid any $$ for the review (LOL).