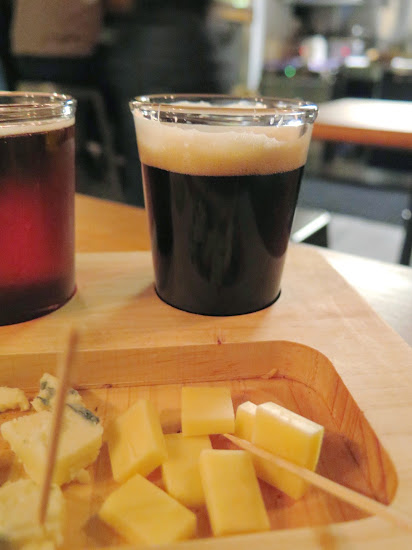 Kid friendliness: it wouldn't surprise me as I've seen people with their kids at hotpot at midnight, but I'd say no kids at the bar please. 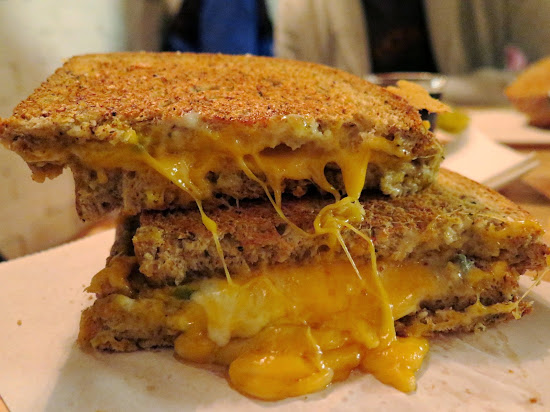 Does anyone else crave melty grilled cheese sandwiches late at night? Apparently it's not just me, as the genius founders of Beer and Cheese offer just that, along with a huge selection of craft beers from around the world. Just a few blocks away from the Taipei Main Library sits this small bar that's already become a buzzed about place to chill with friends, especially for those of us who don't "lounge bar" anymore. 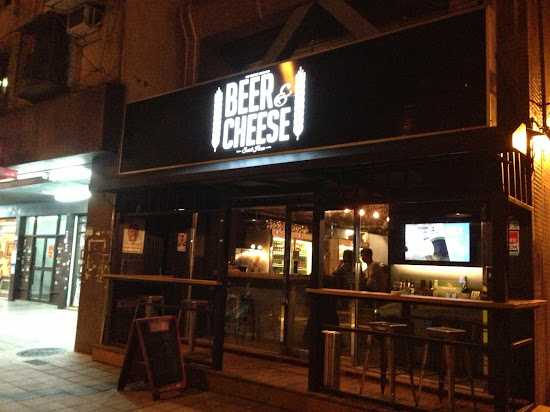 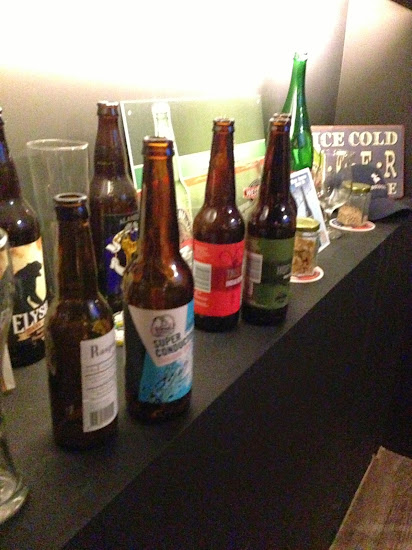 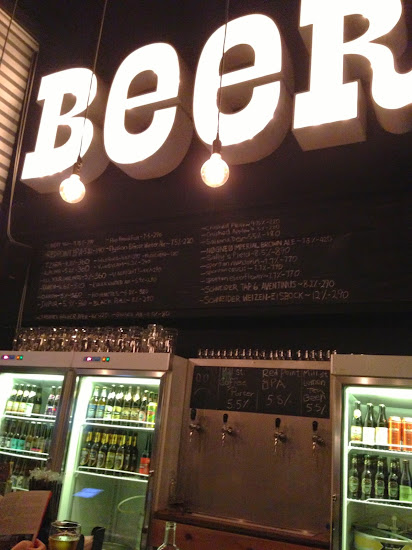 Sitting inside Beer and Cheese, my friends from LA and I all agreed that we were transported away from Taipei to Silverlake (or fill in the blank of the hipster area in your city from the States). All the neighboring conversations were in English, the bartenders/servers spoke English and the decor was very cool. I was surprised to find it fairly crowded on a weeknight, but luckily there were a few open tables in the back to grab. I think there's a second floor as well, but it wasn't opened up that night. 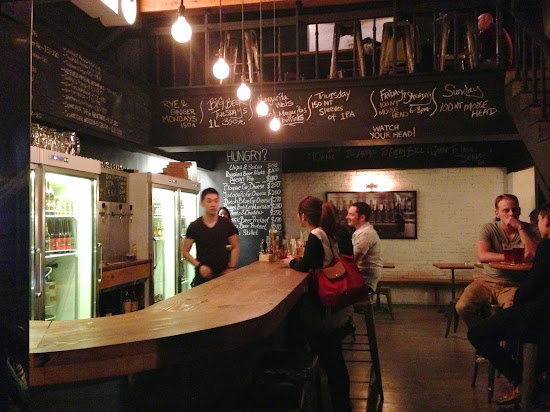 Inside, the menu is scribbled on black chalkboards along the walls and seats can be found along the bar or corner tables. Beer and Cheese sticks to its focus for munchies- a handful of grilled cheese sandwiches, nachos or I strongly recommend the spicy beer pretzel. 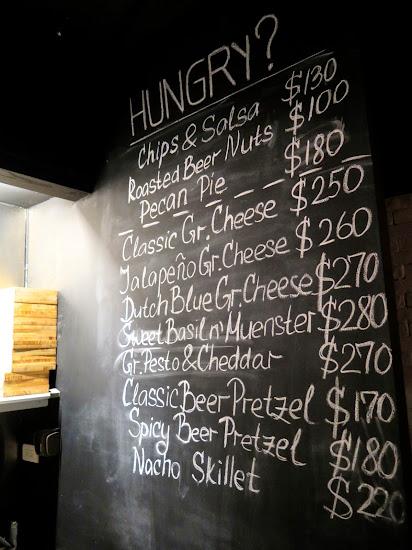 And I'd heard of wine and cheese pairings but never before with beer. But it's worth a try, especially if you want to get a hand picked sampler with the Flight or the Mill St. Flight. I don't even really like beer and I enjoyed it. I went with a couple of guys and we all shared two flights and ended up ordering a third. I probably ate most of the cheese.

Mill St. Flight  (NT$390) had Lemon Tea Beer with pepper jack, Tankhouse Ale with Danish Blue and Coffee Porter with Gouda. All the beers had distinctive flavors and it was fun to take a sip and eat the cheese to see if the matches enhanced each others flavors. 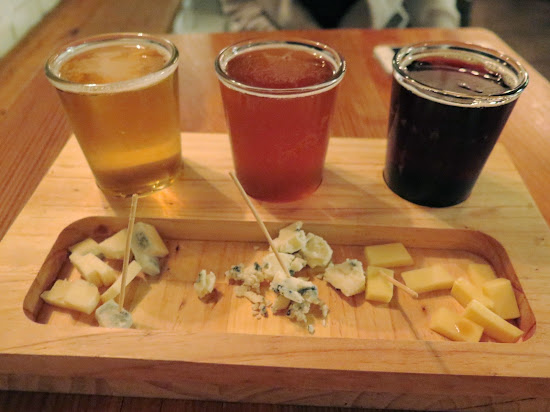 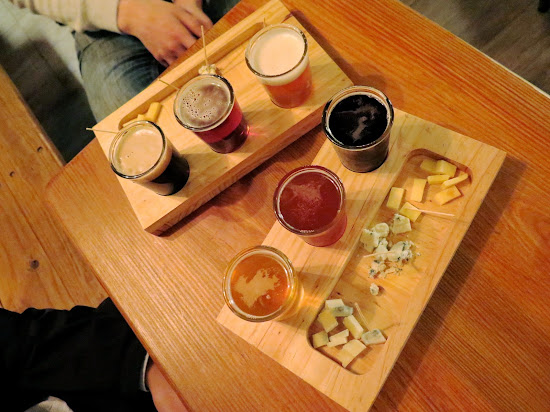 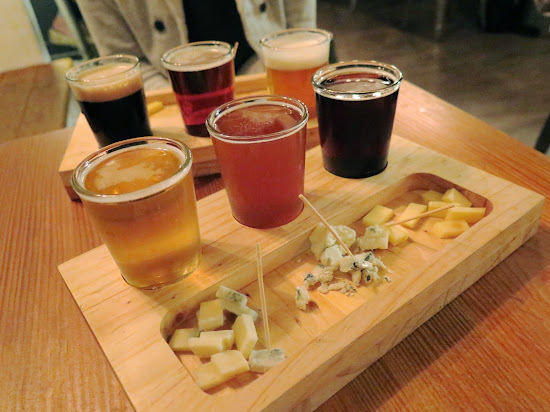 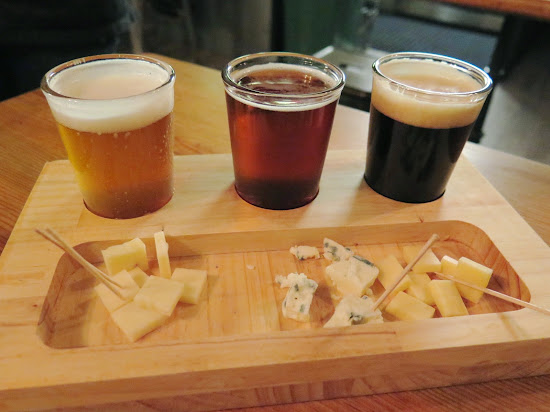 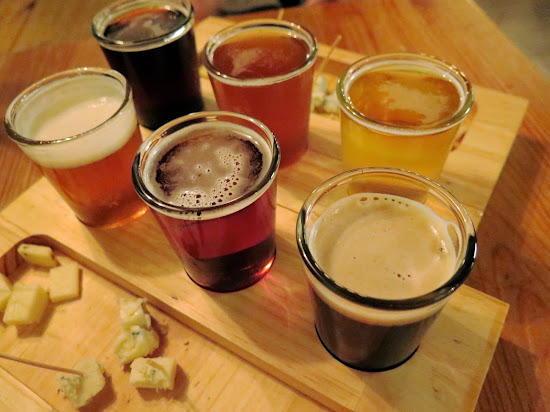 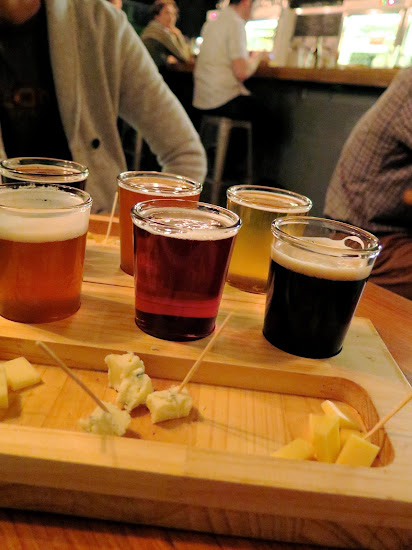 I loved the spicy beer pretzel (NT$180). Thinking about this pretzel while I'm typing up this post at 1AM.  With a spicy jalapeño cheese dip, the beer pretzel was soft, hot and I could have eaten the whole thing by myself. 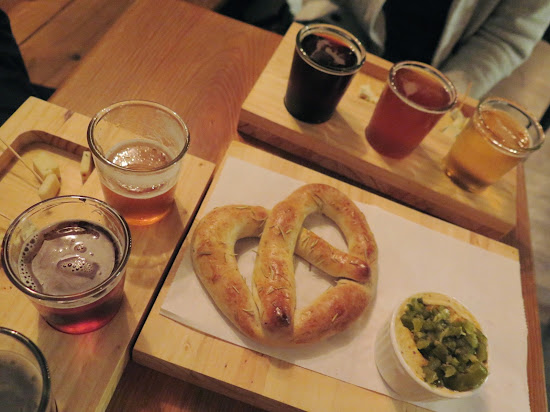 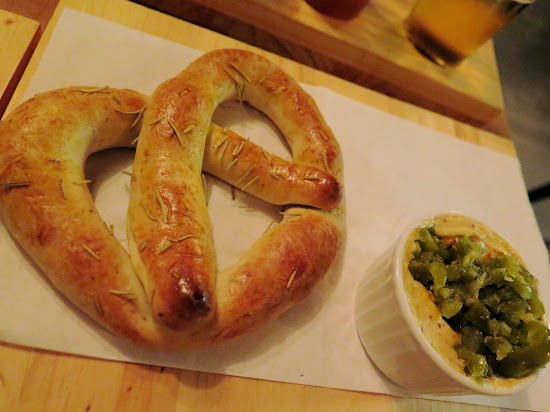 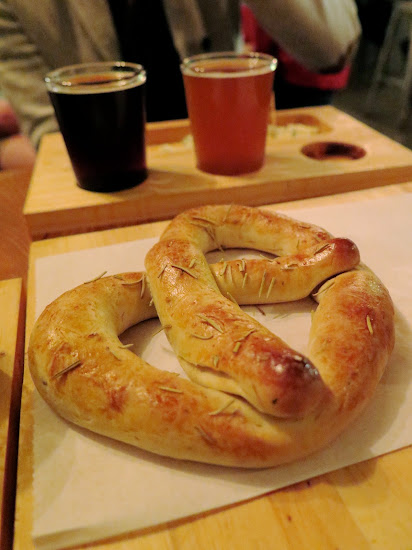 Skillet nachos (NT$220) were generous with lots of salsa and cheese. 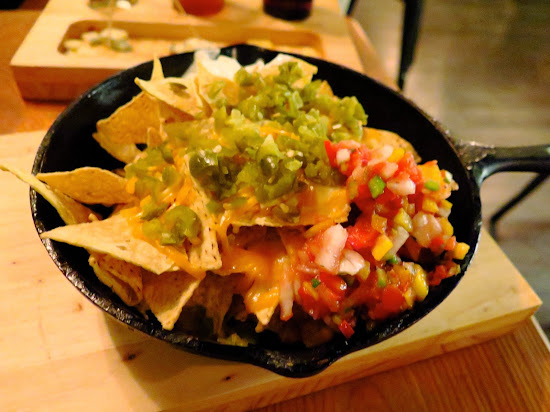 Running out of room for all our food and beer. 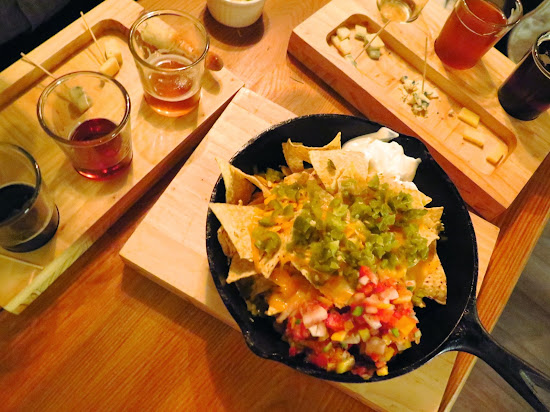 I liked the Dutch Blue grilled cheese (NT$270), but the blue cheese taste was very faint, if at all. The bread was a tad on the dry side for me especially on the surfaces, compared to buttery grilled cheese sandwiches I've had in the past. The sandwiches are definitely on the expensive side, ranging from NT$250-280, making Toasteria look like a deal, or for those of us who make grilled cheese at home. But they are big enough to share, and I could only eat half. 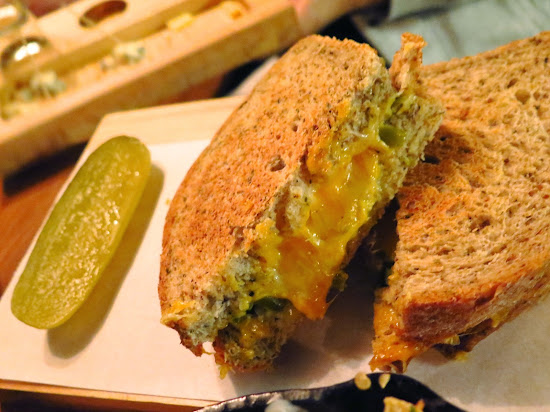 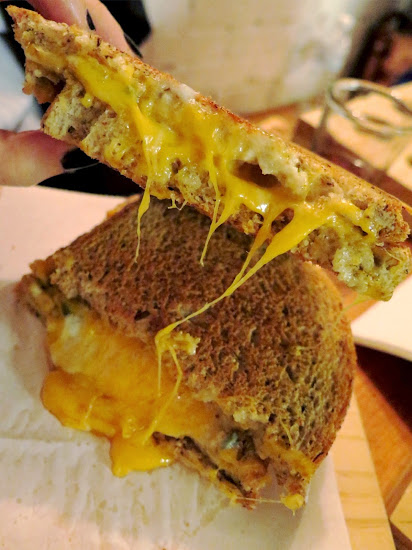 So if you find yourself craving a hot pretzel and a cold beer at 11PM, now you know where to go.

It's exciting to have new additions to the growing scene of gastropub/wine bars have opened in Taipei in the past few years, including Whinos, Diary, EIEIO, Lobster Bar. Write ups coming soon someday, I swear!

PS. Proof of the hipster vibe, the total and bill is tallied on the iPad. 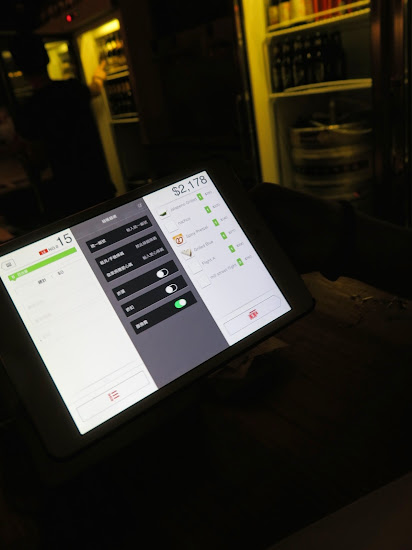 You didn't say much about the beers themselves, although the selection certainly looks expansive. Do you know what breweries they use or do they brew their own or..?

Imported craft beers from around the world, I believe. I don't think they brew their own yet. But you can check out their Facebook page or message them for more details.

Great ambiance, good pairings between beer and cheese, really a nice place to go anytime they're open! A negative is that I didn't like the grilled cheese sandwiches because the bread was dry and too thick. They either need to put more cheese or butter the bread up with that price. I felt like it was quite not worth paying the hefty price. There are other better choices.

Hi ,
I love you blog!!
Do you know this Google already?

Google of Hungry in Taipei

You can personalize it with a name you choose. With the same results of Google!
Use it as your homepage with your own name on it!

"I don't even really like beer and I enjoyed it."

I have met many women who have said they don't like beer, but what they really mean is they don't like the beer they have tasted, i.e. industrial lager. With more than 140 different beer styles, there is a beer for everyone, it's just a matter of finding what you like. A typical starting place for women is fruit ales, wheat beers, and chocolatey stouts.

Food pairing? Absolutely! And given the range of flavours you find in beer, it is arguably more versatile in that regard than wine. The added benefit of pairing beer with cheese is that the carbonation cleanses the fat from your tongue, allowing you to properly taste the next pairing. Only a sparkling wine will do that.

Yeah agreed about the grilled cheese

Haha true! I am willing to be more open to trying beer!

Just one person's experience: A Sunday afternoon, there are some groups of people there. I walk in and answer the person behind the bar that I'd like to eat in. I sit down and wait for five minutes while the "wait" person fiddles with her phone. One group has to call out loudly to get their attention for service. In this case, "wait staff" doesn't mean they're waiting on you, but waiting for you to get their attention. I can't comment on their food because I got up and left and the woman fiddling with her phone barely glanced up. Maybe I'm being unreasonable, maybe I should have just called out to have my order taken. It just didn't feel good or right, and I won't be giving them a second chance. It seems they don't give a crap.

They moved. They're no longer by Da'an Park :)