Since I discovered Indian food at Berkeley, I have to have it every so once in awhile. I really enjoy the variety of what Indian food has to offer- from the different types of chicken curry- especially chicken tikka masala- to the tender flavor chicken tandoori to the vegetable sides like eggplant or aloo gobi, and of course freshly made naan! Recently, I have been ordering samosas too, when I'm not at the lunch buffet. I used to hit the Indian food spot in Century City mall, until a few month ago, I drove there and discovered they had closed down. For lunch buffets, there is one restaurant I go to regularly in Westwood, as it was in walking distance from my old office, and another in Las Vegas. I was impressed with Tandoor when I went to their main restaurant location in Taipei (I think the first and only Indian restaurant I have been to Taiwan) especially as there were customers there who were also Indian. So I was pleasantly surprised to find that they had branched out into mall location, offering quick and inexpensive alternative to a sit down one. 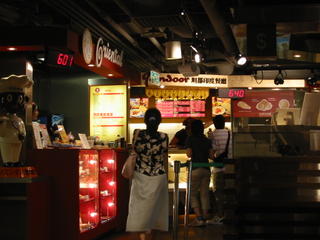 The server that day was a woman that spoke both fluent English and Chinese. I was surprised, since she looked part Indian- perhaps she was part Chinese or just adapted really quickly to working and living here? The menus are clear, with lots of combo offerings, and one sample combo shown in person. I decided to get the chicken tikka masala combo, which came with a side of vegetable curry, rice, naan, a samosa and a drink. I thought it was a good value for about $7 US. 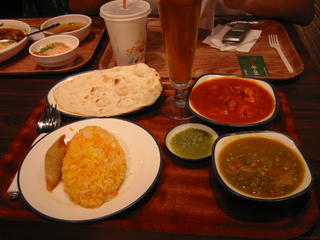 The samosa was smaller than typical appetizer size, but hit the spot. The samosas that I've eaten here in Taipei seem to be similar in that the skin is like won-ton skin rather than what you'd find in LA. It makes it kind of a fusion flavor- maybe to accomodate Taiwanese tastebuds? The naan was soft and crispy, great for dipping into the curry. The rice was colorful and slightly stickier than saffron rice, but I've had lots of different kinds of rice. The chicken tikka masala had the right amount of spiciness and sweetness, but was a little more watery than I would have liked, and the chicken pieces were bitesize. The vegetable curry was spicier than the chicken, and also a little too watery. The peas and tomatoes were good accompaniments to the rice and chicken. The drink was a ice tea that came in a fun tall glass and was a refreshing sweet cold drink to the curry.

If you are looking for a quick fix for Indian food, I would recommend the mall Tandoor. If you have the time, I would go instead to the main restaurant.
Posted by joanh at 10:08 AM

i don't like indian food, don't take me there when i come :)