I was very excited to hear about Macaroni Grill opening up nearby when I came back, even though I had probably only eaten there a few times in the states. But it was another place for US style salads, pasta and pizza! The two other occassions we ate at Macaroni Grill were good- check out the other review (Italian)- but on this occassion, I was craving pizza, and craving it right away!

I called and asked what their selection was for my pizza to go- trying to decide between BBQ and asked if they had mushrooms on it. The hostess recommended their Four Seasons pizza, which was mushroom, tomatoes, canadian ham, and pepperoni. I imagined it to be a combination pizza, but when I picked it up, I discovered, it was literally four flavors on one pizza, with each flavor getting its own section and a couple slices. This would be a great recommendation for people who want to share a pizza, since the vegetarian and meats are separated, unlike a combination pizza, or someone who couldn't make up their mind on what to eat. 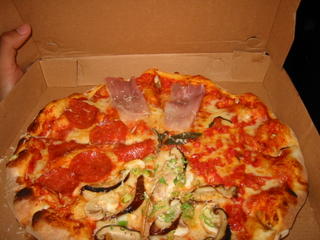 I will admit I was pretty hungry by the time I got to eat this pizza- they said it would be ready in 10-15 minutes and it was ready faster than when I picked it up. They even called to let me know it was ready. The pizza tasted SO GOOD! The crust was the right combination of soft and crispy, unlike a lot of pizzas made in Taipei, where the crust is either too thin and crispy or too doughy. The tomato sauce and cheese were the right amount and right flavor, not too salty or bland, but just like what you would expect of a restaurant type pizza. The toppings were proportional to the pizza, just the right amount and I liked all the 'seasons' except one- the pepperoni hit the spot, the tomato was surprisingly refreshing, kind of like bruschetta on your pizza, and the mushrooms were fragrant and delicious! There were both shittake and white mushrooms on it, and the flavor was like they lighlty sauteed them and then put them on the pizza before it baked. I didn't like the Canadian ham or prosciutto or whatever it was- it was too salty and hard to eat. If I ordered it again, I would ask them to sub in any of the other flavors for those that section.

It was about $12 US for the pizza, a bit more than CPK or what it costs in LA, but about average for restaurant pizza here. My old favorite places for pizza here were Pasta West East (which recently I don't like their pizza as much anymore) and Cosi O Cosi, which I will have to taste again. In the past, we also tried Auntie Sue's pizza (not to my liking) and long time ago, I had Domino's/Pizza Hut here. Be forewarned- if you try pizza in Taipei, you will likely get some toppings which we aren't used to, like corn or peas or seafood. Some people like it, but I prefer pepperoni and But the next time I'm craving pizza, my first choice will be Macaroni Grill!

PS- they have a website for Macaroni Grill which lists the location for the Taipei restaurant. If you want to see what the menu is probably like, you can check out the menus for the other US locations, though each restaurant has its own variation. I thought this was a good place to at least figure out what they probably had.
Posted by joanh at 2:46 PM

do make reservation.
FOOD 4/5 SERVICE 4/5
Last words: save room for chocolate cake and beware of the singing lady.

that looks pretty yummy.. mmm. pizza. it makes me want to go to bj's :) they should have that in taiwan.. yay for pizookies!

I find your blog rather interesting. Personally I like Romano's Macaroni Grill. It is a great chain of Italian food restaurants. Macaroni Grill offers Tuscan bread, grill dishes, pasta and macaroni, a diverse range of Italian souses and many other Italian dishes. In addition, the company offers catering services for all kinds of gatherings in California, Arizona, Florida, Georgia and in some other U.S. states. I have learned about the restaurant from www.pissedconsumer.com

Not sure if this is under the same company as in the one in the US. It's very good! Food and ambience are excellent