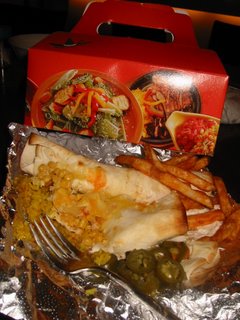 I will have to go another day to try something else and see what the restaurant is like in person. I hear the tortilla soup is not bad and that their beef dishes are better than the other meats. But if you ever want to eat an enchilada, do not go to Amigo.
Posted by joanh at 8:21 PM

Email ThisBlogThis!Share to TwitterShare to FacebookShare to Pinterest
Labels: $$ depends on what you eat, mexican, taiwan

boo... i didn't get to try mexican food while i was in taiwan. too busy i guess. we had fake (chicken) gyros. hahah. but we did have the best enchiladas ever (in taiwan). haha

well you are lucky if you have not tried mexican food in Taiwan, one big problem is no corn tortillas, if any one can find please let me know, xxaniaml97@yahoo.com, I have a restaraunt in Taipei and have made some good enchiladas, and taiwanese people did not like, so mabye thats a problem too, and of course they don't like refied beans, but to be a little positive jakes country kitchen has some decent huevos rancharos!

denny: hmm, i guess since i bring my own tortillas from LA i haven't really looked for corn tortillas in taipei. where is your restaurant?? i'd love to try the enchiladas.

Well, I was really in the mood for mexican food tonight - but my experience with Amigos has changed that and it will be a while before I go searching again. The food, as mentioned, wasn't terrible - if you could suspend your expectations of what is generally considered mexican food. The founding principles of mexican food (IMO) were lacking: cheese was sparse, salsa not spicy, burrito questionably mysterious... even the beer left a little something to be desired with the quality of lime. The prices seemed high for the quality and quantity served. Also, bizarrely, despite speaking to them in Chinese, they would always answer in English (I am white, though, so maybe that threw them off).

Anyhow - I would recommend Amigos only if you crave something only vaguely mexican. I will still go out in search of mexican food in Taipei, but it may be a while before I can again muster the courage. Cheers!

jake: depends on what you are looking for, but the results are slim- there is La Casita, El Gallo as Stella mentioned and Eddy Burrito in Danshui (which I haven't tried yet). or texmex fajitas at Chili's.

stella: thanks for the tip! I've actually been there already- a few weeks ago and still working on my review!

I wonder if you all know what Amigo means? It means "pengyou" in Mandarin!