This location has closed. New location is at No. 135, Minsheng E. Road, Sec. 3  No more Mac Grill in Taipei. Their second location closed last year and is now a Swensens

I just reread my review of Diamond Tony's and it reminded me of how much better Macaroni Grill is. Macaroni Grill is reliable, pleasant and tasty with a good selection of appetizers, pastas and deserts that you would find very similar to what you would eat in LA. Some people would want to be surprised, for me, I like the fact that I can count on going to dinner there knowing what to expect every time because I usually reorder what I like.

It's hard to find a good salad in Taipei, in my opinion, but Macaroni Grill doesn't disappoint with large share-friendly portions. Their Caesar is a nice twist on the original, with chopped tomatoes and raw mushrooms. I also like their other salads which are spinach based- one features pine nuts and orzo rice and the other one includes arugula and strawberries. 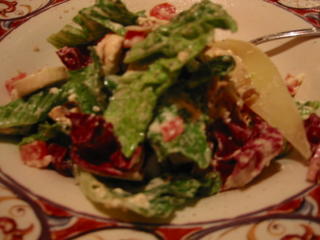 I love mushrooms, so I really like their Chicken Marsala which comes with the slightly sweet and salty sauce, a 3-4 pieces of thin chicken, and side of pasta, topped with lots of slices of shitake mushroom. I prefer this over the honey balsamic chicken because that sauce is too sweet and tangy for me. The pasta for the honey balsamic chicken also comes with sundried tomatoes. Their steak with the mashed potatoes is also quite good. 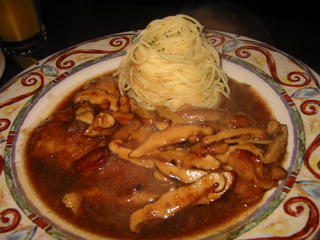 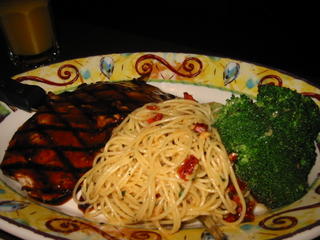 The pizza choices at not as wide as CPK, but has the standard favorites BBQ chicken, Pepperoni and one called Four Seasons which has four different sections of one topping- mushroom, pepperoni, bruschetta and canadian ham. The first time I tried it, the canadian ham was way too salty for me, so they've been accomodating to let me have "three seasons" instead and replace the ham with more of the other flavors. The crust is chewy and crispy at the same time and it's a good sized pie for the price that you pay. The sauce is not too salty and it's the right portion of cheese and toppings. The bruschetta and mushroom toppings are a refreshing choice. It's probably the best deal and best crust of all the places I've had. 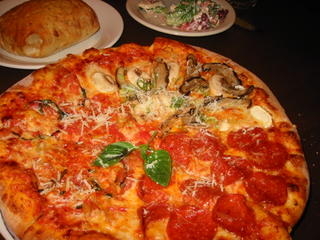 I've had most of their pastas- the lasagna, the spaghetti and meatballs, the seafood creme pasta, the shrimp angel hair. The portions are huge- usually shared family style- so you sometimes have enough to take home as leftovers. The lasagna that day was a bit too salty for me. The angel hair was a little too fine and dry for me, tasted almost like a chinese rice noodle- I'd probably order the spaghetti and lasagna over the angel hair. 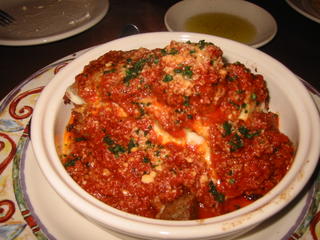 Like Chili's, the atmosphere is boisterous, booth and table style seating where families, business lunches and birthday celebrations are all happening at the same time. They have separate Chinese and English menus, upon request. It's pretty crowded, so you should make advance reservations if you have a large group and want to be seated right away. The waiters are usually pretty good about the service and understand if you order in English.

The desserts include tiramisu, chocolate cake, panna cotta, berries with creme and a chocolate swirled cheesecake. My favorite is probably the cheesecake with the oreo cookie crust and the creamy richness of the cheesecake. Big enough to share, but you can eat one yourself if you really have a sweet tooth. I would eat the warm chocolate cake at Chili's over the Mac Grill chocolate cake which is denser and fudgier, but the tiramisu is a not too sweet good choice as well.
Posted by joanh at 4:35 PM

i think it's funny because when we're in LA you hardly go to macaroni grill. :P

Another great hungry girl review! It was great seeing you in LA, but I did miss your restaurant reviews. :) Looks like there are more than a couple good Italian places to visit...

I seriously recommend the chicken florentine salad and their grilled salmon. Delicious to share!!! Their pasta servings are equally good, but servings are so small. Better stick to the salad instead! It's the best in TPE. Oh, and their desserts are totally delish -- the best tiramisu and coffee latte cheesecake in town! :D

We have tried the Macaroni Grill twice in the last week, partly on the strength of your review. So far we have been most impressed by their strawberry salad and pana cotta.

We crazy Australian/Canadian-types are always happy when we can find a decent salad in Taipei...

Keep up the good work.

THANKS! I'm so flattered! I just went there recently too, and it reaffirmed how much I like it over other chains here. All their salads are pretty good and my pasta favorites right now are the Spaghetti di Mare (crab meat pink cream sauce) and Chicken Rigatoni. I really like the lemon cake dessert and coffee cheesecake they have too!

Hope you guys let me know what you think of the other places!

Sometimes I go to Macaroni Grill just for the Lemon Passion Cake. Great!

Billy: mmm. I really like their lemon cake too, though people in my group usually go for the chocolate. I think it's seasonal though.

We've linked to your review from ours, at www.foodchannel.com.

I find your blog rather interesting. Personally I like Romano's Macaroni Grill. It is a great chain of Italian food restaurants. Macaroni Grill offers Tuscan bread, grill dishes, pasta and macaroni, a diverse range of Italian souses and many other Italian dishes. In addition, the company offers catering services for all kinds of gatherings in California, Arizona, Florida, Georgia and in some other U.S. states. I have learned about the restaurant from www.pissedconsumer.com

Some of the best pizza I've had in Taipei. A bit on the small side though. I recently ate at Famous Larry's New York Pizza and was really impressed. Probably as close to actual NY style pizza as I've had in Taiwan. Price was right too. Somewhere around 300NT for a large (19-inch cheese).

wayne: hmm.. that makes me want to try it. is that NY Pizza Kitchen or a different pizza joint?

Sorry for the slow reply. Haven't checked in for a while.

RE your question, I don't believe Larry's NY Pizza is the same as NY Pizza Kitchen. here's the URL

My only issue with Larry's is the quality isn't consistent enough yet. First time I had it, it was terrific. Second time, the dough wasn't chewy enough. A couple of left-over slices ended up tasting a bit like cardboard.

Related to the pizza questions.

They are different places.

Pizza kitchen is from the NY Bagel people...and they make great pie (pizza).

NY pizza is from the Sabbaba people....and they make terrible pie....calling it inconsistent is just being kind.

wayne: good to know! thanks for the link. I will have to check it out.

anonymous: i've heard that NY Pizza Kitchen is NY Bagel people but I didn't know that Famous Larry's Pizza is by Sababa people. I'll have to try both and see!

raven is right - the chicken florentine salad is kick-ass. I'm not much of a salad-guy, but in fact, both salads we ordered were excellent. We had a group of 13, so we had a chance to share lots of different dishes - a bow-tie pasta with creamy sauce and sun-dried tomatoes was yummy, and so was the grilled chicken skewers with wasabi. Shrimp skewers were also excellent. Eggplant parmigiana with pasta was a bit salty, but otherwise quite tasty. Spaghetti with meatballs was ok - the risotto was pretty good. The pizza was a pretty good thin crust pizza, but I think I still prefer Alleycat's crispy, European style pizza. The cheesecake and the tiramisu at the end were monster-sized - I liked the tiramisu. I would definitely come here more often if the portions weren't so big (gotta come with a group). IMHO, joanh's recommendation is right on target.

Has Macaroni Grill closed it's doors or are they closed for renovations? I was there last weekend and it wasn't open. There was a sign in Chinese, but I couldn't read it. :(

Has anyone been to Macaroni Grill after the location change? Wondering if they are as good...