Anyone who has eaten pizza in Taiwan has probably noticed the different toppings that are popular here such as corn, peas, squid and seafood. Often, it's not not good, just weird. As a kid, I loved pizza from Little Caesars and Pizza Hut. As a college student, I loved pizza from Zachary's and Fat Slice (go bears!). As a working 20 something, my pizza choice was CPK and Papa Johns. So what to do when none of those places are here in Taipei- except Pizza Hut? Order delivery!

I haven't stepped into a Pizza Hut restaurant here, although it always looks very crowded and I believe they have the lunch buffet option. I'll have to try it sometime. But the delivery here is surprising quick and easy.

They have special "set menus" if you are ordering for one or two, which is NT$398 (about US$12) which includes a small pizza (with 6 slices), buffalo wings and a liter of Pepsi. Their bigger pizzas range from NT$340-650 depending on the sizes. They also have pan crust or thin crust. I like Pizza Hut for their pan crusts. There's a crispy, chewy texture that is slightly greasy but fulfilling at the same time that is uniquely Pizza Hut. Also, why I prefer Pizza Hut over Domino's, which they also have in Taipei. They have different sides like wings, garlic bread, waffle fries, pasta, and potato skins.

I got the set menu with a Hawaiian pizza (pineapple plus canadian bacon) and added mushrooms (+NT$45). 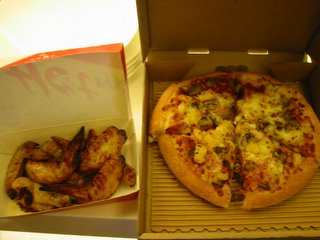 The first time I ordered it, I devoured the pizza and was extremely satisified with it, except that I accidently ordered the original BBQ wings instead of the spicy Buffalo wings. The second time I ordered it, I accidentally ordered the BBQ flavor again. The wings/legs are decent- slightly sweet BBQ flavor instead of the traditional spiciness that I will have to remember to distinguish to order next time. The pizza the second time, I noticed that the mushrooms were canned instead of fresh mushrooms which have that watery canned mushroom taste and the canadian bacon seemed like regular ham. I guess I didn't notice the first time under all the cheese. If I order again, I'll probably try it with pepperoni instead of ham or just try a different flavor entirely. I've also had the seafood flavor with local friends before which I personally don't prefer- it comes with a cream sauce instead of tomato sauce and is a bit too rich for me. You gotta have pizza with tomato sauce!

The first time you order, you can browse their English website which you can check out all the toppings and see pictures. You can then browse the store list to see which one is closest to you to order. Because a lot of foreigners order from them, they usually can speak enough English to take your order. With your delivered order, you'll get a mini delivery menu with pictures to keep handy for the next time you have a craving and don't want to deal with cooking, driving or parking!
Posted by joanh at 3:34 PM

You go, Hungry Girl!! I think you're the first food reviewer to include pizza take-out in your findings. As you mentioned, those ARE interesting toppings. I guess it's like how the 7-Elevens over there have more to offer, eh?

The wings remind me of a convenient Shin Sen Gumi, hahaha!

Whoa, I didnt know you were a Cal student too!

I have heard about this international fascination with Pizza Hut. But really? Pizza Hut is the best pizza in the world? Wow! I suppose I'm spoiled as an American having lived a couple years in Chicago... but Pizza Hut... really? Usually when there are two pizza places on the same street, Pizza Hut is still consistently the lesser quality of the two.

Nice blog, the article you have shared is good.This article is very useful. My friend suggest me to use this blog.