Ever since I found out about Alleycats after hearing many people rave about it being the best pizza in Taipei on a forum talking about food in Taipei, we decided that we had to try it out. So one weekend evening, we called them to see if we had to make reservations or not and they said they probably wouldn't have any tables open until 2 hours later, especially since they didn't want to rush their customers. That was too late for us, but we successfully tried again on the following Wednesday night. I mention the details of this because (1) once we got there, it was pretty packed, even for a mid-week evening and (2) the whole restaurant is basically one room with about 8-10 tables so I'm pretty sure it fills up fast, so (3) make reservations in advance if you want to eat there on the weekend as the website suggests!

It really is in an alley, as a lot of these restaurants in Taipei are, so the name is fitting. We called ahead for directions, but be warned even if you do so, they were a little bit backwards for us, but we eventually found it. Once you get to that area, you'll easily spot it from the bright red neon light outside. 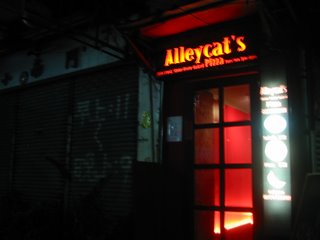 You'll head down the steps into the basement, spotting the daily specials on the chalkboard. A small bar lines the wall and the hostess is also the cashier. Don't forget to come with cash, as I found out after we got the bill that it's CASH ONLY here. It's dark and a bit smoky (though their website says Mondays are no smoking days), probably 60 percent foreigners, 40 percent locals and mostly adults.

Pizza is the specialty here, but they also have calzones, a smaller selection of appetizers, salads, croccante (garlic bread/pizza crusts) and dessert. At their Neihu location, they have pasta as well. While they have a selection of pizzas with chosen toppings, they have a pretty wide list of toppings that you can build your own pizzas, including artichoke hearts, basil, garlic, tomatoes, peppers, mushrooms, spinach, pineapple, chicken, asaparagus, calamari, chorizo, feta, italian sausage, proscuitto, pepperoni, shrimp and sundried tomatoes. This is more variety than the toppings you'd find at Macaroni Grill, and thankfully no toppings like corn (which is popular in Taiwan).

We ordered both the Tomato and Basil bruschetta (NT$100) and the Caprese (NT$340). Alleycat's caprese comes with two slices of baguette topped with tomato, basil and buffalo mozzarella, so I actually would probably just order the caprese next time and not the bruschetta unless I had a larger group that needed finger foods. The thick baguette slices were oven-toasted and buttery, which gave a satisfying crunch to accompany the sweetness of the tomatoes and cheese. 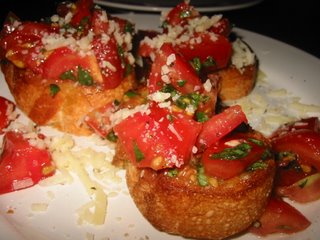 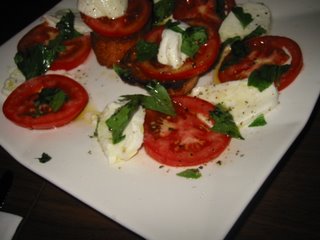 We decided to get the 12 inch/Large pizza of day which was chicken, spinach and brie (NT$400). I asked them to add mushrooms as well. We also got a Capriccioca calzone (NT$420) that had sausages and vegetables in it.

Alleycat's pizza is probably the first one Taipei that I've eaten where the pizza was so hot, that the mozzarella cheese did that stringy bubblegum-like stretching, as we pulled the slices from the plate. The toppings circled the center and spiraled outward and stopped about three quarters of the way out where there was just sauce and crust. The marinara sauce was a light foundation, and the thin crust was crispy, just like the kind of pizza you might get in a neighborhood pizza hangout back in the states. The part of the pizza where it's just sauce and crust tended to bit a bit drier and not as flavorful. Their coke (NT$50) also comes in the classic coca-cola glass bottle, which is a nice touch.

A couple bites in, I realized my mushrooms were missing. I also didn't really taste any Brie. While I did get the mushrooms taken off the bill (after asking twice), I don't know why I didn't also ask about the Brie. I guess I figured the Brie melted into the cheese, though Brie usually has a pretty distinctive taste. I bet it would be great to get a big group together and order a bunch of different pizzas with different toppings to share. 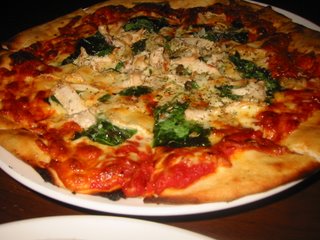 The calzone was huge- definitely big enough to share. The crust is softer and chewier than that of the pizzas, but still has the crispy oven baked quality. The dense fillings inside spilled out as we cut it. The cheese was not as hot or melted as the cheese on the pizza. The calzone also comes with a little side of caesar and marinara sauce. 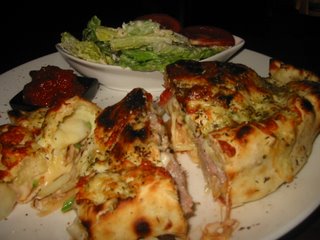 Once your food comes, they pretty much leave you alone, although the place is small enough to wave down someone if you need more water or something. The service is friendly, but not overly attentive. On their website, they say they have live music on occasion too. It's open quite late on the weekends, so it's probably a fun place to go for a late snack. Their Li Shui location is only open for dinner but their Neihu location is open for lunch and dinner.

The important test was that the leftover pizza still tasted great the next day- even cold out of the fridge. The prices are very reasonable for the quality and portions you are getting, especially being a "specialty" food in Taipei. I've also heard that the owner of Alleycats opening another Italian restaurant right next door, called The Italian Job. So I'm looking forward to trying that out, as well as going back to Alleycats.

Great review! I agree and recommend Alleycat's also. Really good pizza just like what you would get at a nice restaurant in the U.S. Nothing like the other taiwanese pizzas! mmmmm

I agree, the best pizza in Taipei, the service has been very good. Try the extras on the menu you need to work with menu and tell them how to do it. The salads are also very good.

The only bad thing is how smokey it is. Have not been to the new one I hope they have done something about the smoke there.

Well... I would agree that it is a good pizza. Pizza Hut pizza can also be good if you are really drunk. It may even be the best pizza in Taipei (alleycats), unless you count WuLai as part of Taipei. If you do, then you can't really compare the "stone oven, authentic" pizza of alleycats to the magical experience of pizza as art which you can find if you are willing to hike up a bit and take in some clean air. Artists, apparently, don't like dirty alleys to perfect their craft in. Check out POW WOW! pizza in WuLai and you will see what all the Taya tribe are raving about. Although, the boss is some weird foreigner with a mohawk. Still, his pizza was absolutely genius. I would say it was as good as pizza back home, but, it wasn't, it was better than any pizza I've ever had. Much! Yay, Pow Wow! WuLai has food now. I'm going back this weekend!

Could you post more info on this so called Pow Wow pizza place near Wulai(烏來)? I have looked all over the web and cannot find anything to related to it. I'd quite like to try it out.

The Alleycats in Tienmu is quite nice and the service was wonderful, much nicer then the basement place. Also, quite busy, so call and reserve. I see people are finding the place even though taxi drivers can't. And thank God No-smoking soon in Taiwan.

Have you tried this new place in Shilin? Next to the temple with the fake goats on the hill. Faust Pizza. The guy making the pizza was from Alley Cats, I hear. ZhiCheng Road, Sec 2, No.20. 0983-772-184. They have a couple picnic tables outside and a few tables inside. They always say there is a huge wait for the pizza but we never have had to wait as long as they say. The pizza is thin crust and wonderful. Not one kernel of corn anywhere! Once we ate in the park right beside the restaurant. Last time we were there they were just serving pizza and drinks, but the new owner said they will be serving salads one day, too.

Unfortunately, it's not what it used to be. Just ate there tonight - waited 45 minutes in an almost empty restaurant for my pizza - it was good pizza but not nearly as filling as it used to be. Service was poor, only one waitress and always needing to find her for something. That, combined with the price of the pizza (400+ NT), I will stick with Mary Jane's from now on. Oh, and their website seems to be permanently down, so they won't get this feedback.

I don't know what happened to Alleycats, but almost everything about it is terrible now. It used to be great (at least the Neihu/Donghu restaurant).

I went there a few weeks ago. It was a Saturday night. Not a soul was there except for the 3 wait staff....and of course the 2 cats. I know it's called Alleycats, but having 2 cats walk on the seating, tables, and YES even the bar where the food sets for the waitstaff! WTF?! The staff even allowed the cat to put it's face in one of the bowls and check out the food. Also, the cat's food and litter box is out in the dining area, right next to a table. It seriously smells like a kennel in the restaurant. Mmmmm, there's nothing that sells pizza like the aroma of cat crap.

The walls look like they haven't been painted in years, the plates and silverware were dirty, and one of the plastic ad thingies on the table literally had spider webs on it. Cat paw marks on the sofas, as well as claw marks.

The waitstaff was terrible. We were the only ones there (3 of us), yet it took almost 45 minutes to get our pizza. And though we asked twice, our beers didn't come until we were finished with our pizza. Um, all ya gotta do is open the bottle and pour!

The entire experience was a bit surreal. 3 years ago I would have (and did) recommend Alleycats to anyone......now all I can think is that it is a front for the Taiwanese mafia or something, ha ha!

i stumbled across the location next to the electronics market. Sorry i cannot be more precise i am a wai taiwan ren first time here. Their place is quiet at 21:30 on sunday, place is a pub style place with american theme restaurant feel to it. Their house beer has run out so cannot comment on whether it is amber nectar or alleycat's piss...
Have ordered a calzone, it is being cooked in the oven. Ambiance ok, cool music, will see if pizza is ok...
Part 2 coming up when pizza gets here. I am on my own so i have some idle time :)

the pizza has arrived. just the right size for a hungry hairy male.
Smells nice with good rosemary . Filling is well done and fill pizza properly. Cheese is good althhough some may complain it has too strong a brie taste? Salad is wimpy actual contents ok but very small..
Pastry is prett good. I think i taste the olive oil in it, but maybe it is missing some harder flour, it is a bit soft, as if the flour is closer to jiaozi flour.. Good overall i think, at least on the pizza front! Worth going to and certainly worth stumbling upon!