Finding VVG Bistro is like finding a secret - it's one of those restaurants tucked into a alley lane off a main street, there is no signage declaring the name of the restaurant, and there is a garden-like deck patio out front, so that you might miss the entrance to the restaurant. Inside it's like as if someone from MOMA created the interior design- plastic wavy lights deck the ceiling, cardboard sculptures line the walls, usually there is jazz or pleasant ambient music in the air. 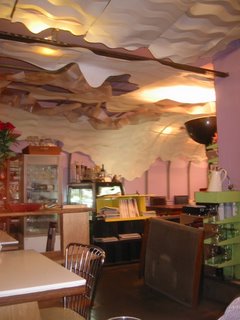 The food is usually very, very good, or VVG, but I have to admit that in my most recent trips there, I have been more increasingly disappointed. Is it because the owner opened another restaurant a few doors down, VVG TABLE, and splits her time to the detriment of both places? Or is it because they change their menus with the seasons and I have to rediscover what I like? Honestly, I think it was I wasn't in the mood that day for their leisurely service, which seemed to be at a s-u-p-e-r s-l-o-w snail's pace that afternoon.

The menu changes every few months and features a few appetizers, soups, salads, some pastas and meats and desserts. Their food is always beautifully presented and encouraged to share family style, though the portions are smaller than you would find at an American style restaurant.

When we sat down, we requested their pesto and bread (NT$60) to start, which features fresh pesto and toasted bread. Even though the restaurant was virtually empty, it took them awhile for it to get to our table. The pesto is pretty addictive, with the basil, garlic and olive oil mix that is the right combination of each to spread on your warm slice of bread. 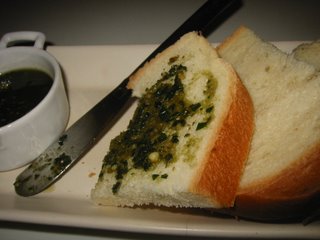 In past visits, I really enjoyed their mushroom soup, which was like a buttery puree of mushrooms that melted in your mouth. This time, the soup looked beautiful - presented in a martini glass, but tasted sourly bitter. 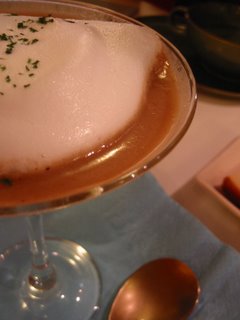 The server said that it might be the cognac and the new type of mushroom they were using that I was tasting, instead of the old version that I was used to, which had been served in a cappucino cup. So instead she offered to replace it with the tomato soup which actually was a hearty tomato mushroom broth soup with lots of different mushrooms in it, including shiitake, porcini, oyster mushrooms. 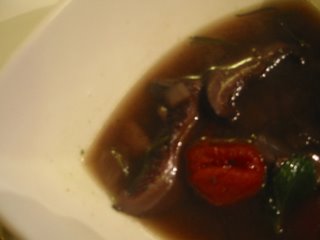 Their soups (NT$150-180) are typically pretty good- so my friends' pumpkin and watercress soups were very tasty as well. Flavorful, not too creamy or watery, but colorful and pureed so that you wonder what different elements went into making such a good tasting soup. 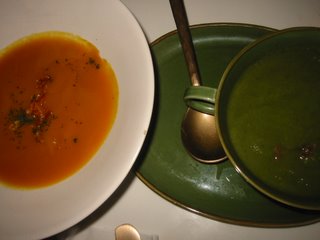 The caesar salad (NT$280) comes in an oversized clear bowl and is enough to share with 2-4 people. 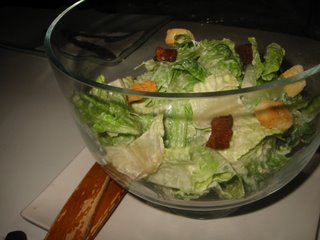 My favorite main dish is probably the roasted chicken dome (NT$540) though this time it was stuffed with water chestnuts which I don't like. The baked chicken is tender and juicy and the skin is crispy. It was served with angel hair and a delicious pile of mushrooms and mushroom sauce. After this visit, it was still VVG. 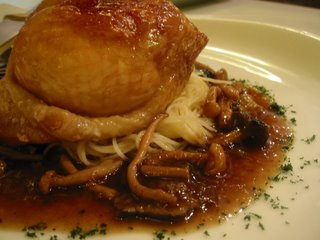 The roast duck leg (NT$520) was also roasted, though not as tender as the chicken. It came with a tiny side of green tea infused rice, which was bit on the dry side. 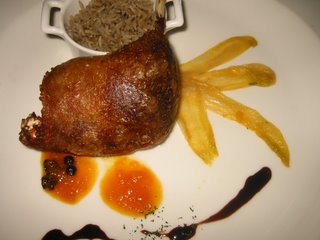 The filet mignon (NT$750) was very soft. I do not frequent French food often, so I don't know if this just the way that filet mignon is served or if it's the beef they have here or if it's the medium rareness of it? Anyways, I find it mushy for steak which was also the case with my experience at Bolero which is also a French restaurant in Taipei. Hmmm. Perhaps more seasoned French cuisine eaters can shed some light for me? 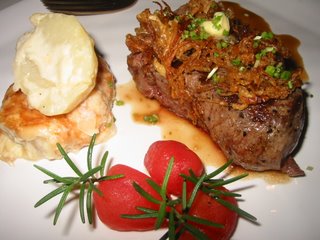 Someone in our party had the lemongrass linguine (NT$320) which I had a small bite of it. It was very citrus and light, which the pasta had a good bite. It came in a deceptively wide and deep plate bowl, which made the portion look small, but it was actually a healthy amount of linguine. 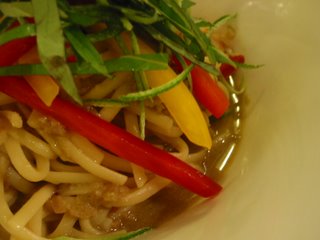 The desserts also disappointed this time, perhaps because the open kitchen took away the mystique of it all. I saw them heat up the rice pudding (NT$120) in the microwave, and it wasn't even that warm when it was consumed on the table. It was like a dense custard with soggy carmelized rice krispys on the bottom, and the top looks as if it should be crispy, but it is not. 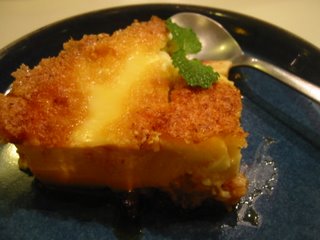 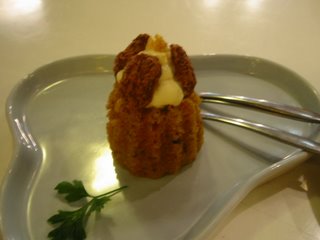 Again, I was unhappy with the pace of service that day. Not with the time the food came to the table because I know that takes time to be prepared, but before and after our meal, we had to wave someone down and ask three times for our check. Because the restaurant was not close to being crowded the day we went and they have an open kitchen, I expected decent servcice. I could see other workers busy with kitchen duties, who were very non-attentive and maybe it's not their job to serve us, but if there is only one server and she has disappeared then they should keep an eye out for their customers. There is one person who usually serves us and she is very good, but when she's not there then expect to wait. If Grace, the owner is there, definitely get her recommendations.

They have a weekend brunch, but I haven't tried it. I have tried the brunch at their sister restaurant, the newer VVG Table, and it's definitely worth the trip out to find it. We used to take a lot of people here to enjoy the atmosphere and food, especially since you wouldn't typically expect bistro food like this in Taiwan. As I said, finding VVG Bistro is like having a secret, but once you know, it's up to you whether or not you want to tell anyone else.
Posted by joanh at 7:15 PM

Hi there, I was just surfing blogger and ran into your page. I really want to go to Taiwan sometime and live there for a short amount of time. It just looks like a cool place to be and its good to see that they've got some great restaurants. :)

Thanks for the comment. It's definitely an adventure eating in Taipei- you can get almost anything. I love night market and chinese food, but I just can't eat it all the time, so it's been a great experience for me to discover all these places too.

Drop a line if you ever make it out here.

Hi JoanH, I agree that the food at VVG are very "different." The chef changes the menu seasonally, and the place has a very light, airy "Western" feel that I love. Very relaxing. Only thing I don't like is the price --- it's especially high for the amount of serving. I wouldn't mind if the servings are HUGE, but most of it are pretty tiny and unfilling. Regardless, I agree u must be paying for the ambience, and yes, just having a change in menu may be enough to keep u coming back. More power!

yay! a fellow food lover from Taipei! Yeah, my last visit there definitely highlighted the prices are definitely not worth the portions.. it will probably be awhile before I go back, though their stuffed chicken dome is VVG!

Great blog. Very detailed. I'll have to go check this place out. After all, the owner is my aunt, my father's sister.

just ate at vvg bistro tonight, the latest of your recommendations that we've checked out. i liked it! my wife was especially taken with the quirky and ecclectic decor - from the artwork on the walls to the ashtray/sugar holder on the table. "i like everything here" were her exact words.

the food was solid though, as people have said, the prices (for the portions) were a bit high by taipei standards. i wanted more than just those two little pieces of bread to share to go along with that pesto sauce. good chicken dome, good chocolate brownie for dessert, though. and i liked the fact that they give you the option to "share", meaning they served the dishes up one at a time instead of all together.

say, let me know if you ever want to organize some sort of food outing - i used to post a lot on the "chowhounds" board, and i know they would organize trips to restaurants all the time. seems like it'd be a fun thing to do, and a way to meet some other food lovers.

Hi there, we visited VVG B on the 11/5/13 we both loved the place and the surrounds but found the the food portion size to be lacking.

The Caesar was the size of a side salad and the pasta was starter size. Although both very good and the banana cake for dessert was delicious.

But said and done we will still go back.