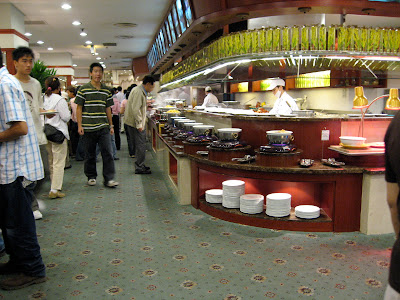 Who knew there were so MANY options for vegetarians? Well, apprarently, the owners of this vegetarian buffet did. Featuring many, MANY different stations of vegetables, tofu, dim sum, sushi, soups, fried options, fresh baked puff pastry soup, noodles cooked to order, desserts, fruits, salads, ice cream, and not one, but two chocolate fountains, there's much to eat even if you aren't a vegetarian. 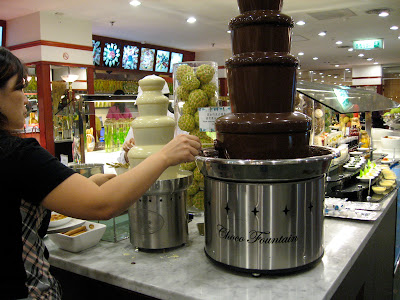 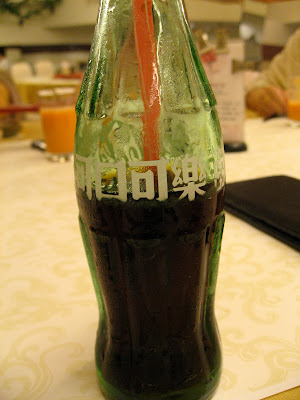 I know a lot of people who make fun of faux meat- "why style and make your food taste like meat if you are a vegetarian"- but it's quite amazing what is available now... even fake sashimi, chicken nuggets and bbq pork buns! 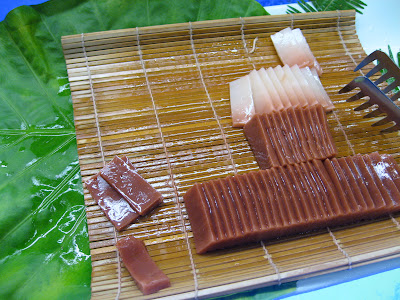 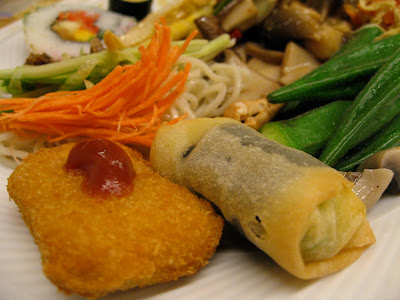 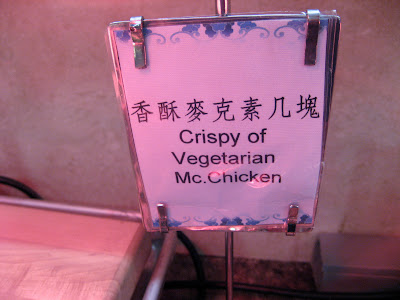 There are plenty of signs in both English and Chinese to help you identify everything, including some of the more mysterious broths and offerings, as well as to point out what desserts include and exclude egg (in case you don't eat any animal products). Unintentionally, some of the wordings are quite funny and native English speakers will probably get a kick out of them. Honestly, I do laugh when I see them, and occasionally, when I even mention the mistake or correction to the servers (not here, but at other places) sometimes I don't think they even know what to do with it. 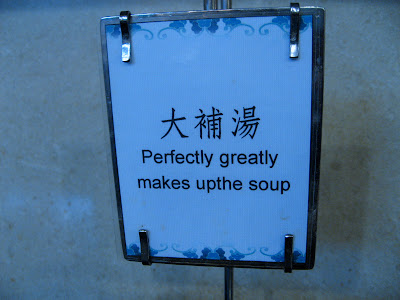 does this make any sense to anyone?

This in particular cracked me up- instead of calling it "stinky tofu" - they politely called it "beancurd of strong odor." 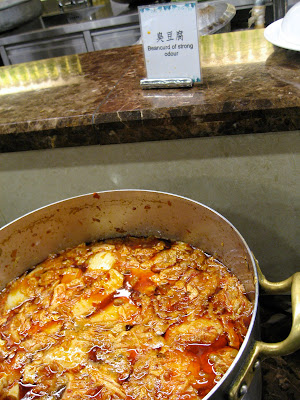 can you smell it from the picture? 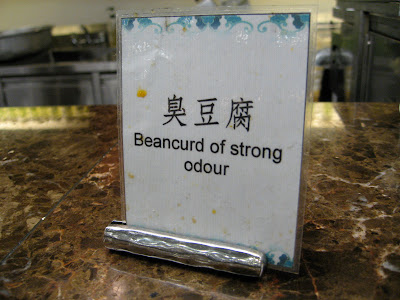 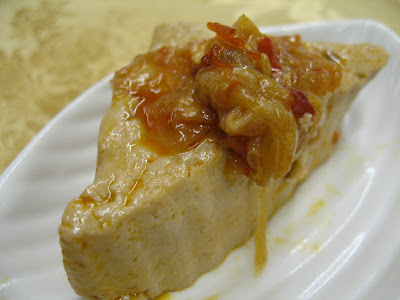 There is so much food to try that you probably could not taste everything if you wanted, so I will just let you see for yourself some of the types of things that they had. 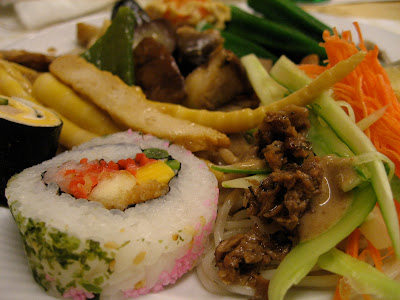 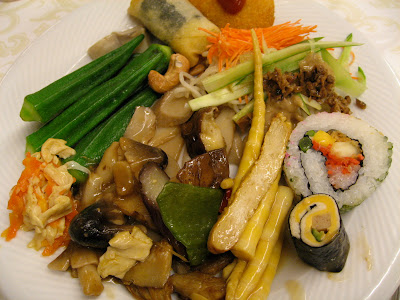 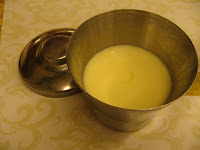 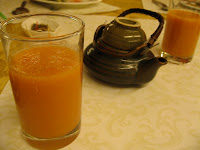 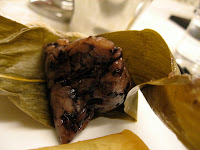 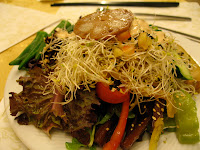 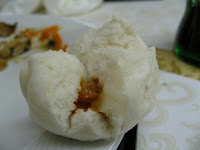 For a buffet, they have a lot of fresh/made to order type options that make it stand out from other buffets. Also, they have a cool system I haven't seen yet at other places. Each table has mini clips that are clipped onto a plastic stand at your table.. if you take them with you when you browse/order your noodles or veggies, they will clip it to your dish and know where to deliver it to you when it's done. 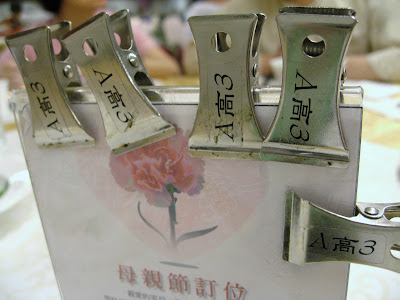 Although they don't do this for everything- you have to wait for your puff pastry soup (in line!) and for your handrolls- it's pretty cool that you're not glued to the veggie station while they steam it up for you. 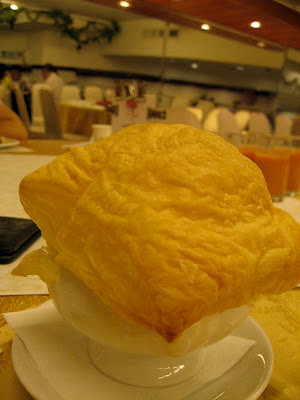 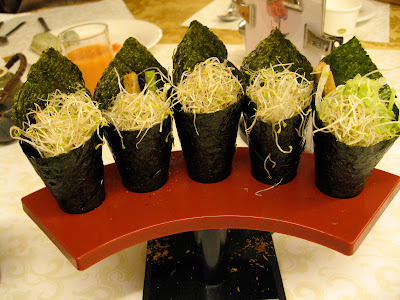 One thing to keep in mind is that you should totally stock up on any desserts you have your eye on right away, especially if you are hitting the end of the meal time since they seemed to disappear fast as everyone was finishing their meals. And it seemed like once the buffet was out, they were out, and they didn't restock.

Although the chocolate fountains were quite impressive to look at, unfortunately, the white chocolate fountain was too oily.. it slid off the banana and other things I dipped into it and it was pretty nasty. Maybe it was just that day though. Also, they had things like grape tomatoes, melons and bananas that may have been previously frozen then defrosted (slightly brown) so it wasn't as appealing as I've seen chocolate fountains in the states with marshmallows and crackers and berries. I also noticed (probably a bit too late) a crepe machine in the same section, but a lot of the nutella was hardened and I was unsure if you were supposed to do it yourself or not. 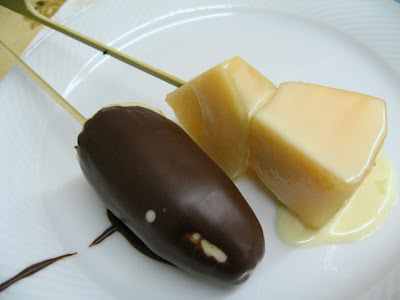 I ended up getting some Movenpick ice cream and some creme brulee/panna cotta desserts. They offer the standard little cakes, creme brulee and fruit (with or without egg) as well as some almond soup, red bean and other Chinese type desserty soups. 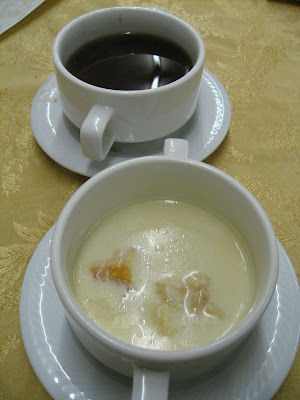 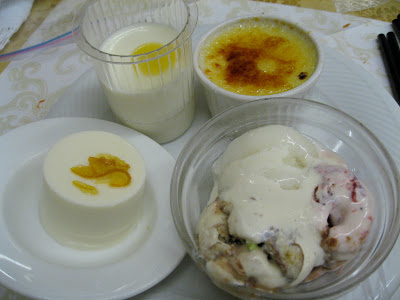 I wasn't sure what this was, but someone at our table was eating it.. it seemed like aloe or the grapefruit jelly like stuff they put in the drinks, and he dipped it into a sweet syrupy type of mixture.

I was quite overwhelemed by trying to write about this place- there were too many pictures, too many things to talk about! But just like eating at this buffet, I just had to dive in, pace myself and not worry to much about it. I don't know if you can tell from this how large the buffet was, but hopefully you'll get a chance to discover it for yourself. If you do, reservations strongly recommended- the place was packed especially on weekends and I heard sometimes you have to find out when they have availability.

beautiful pictures. i wish i was back in taiwan. i could go for some japanese curry.

thanks Marcus!! you can get some good japanese curry in LA too- where are you craving from?

Who would ever imagine a chocolate fountain at a vegetarian buffet in Taiwan?! That is too cool. I love vegetarian food! It must be worth the splurge if so many people go there. Thanks for sharing the pictures!

I ate here when I went to Taipei in June. googled it cause i couldn't remember the name of the restaurant! (do you know the chinese name by any chance?)
Best vegetarian/vegan food ever (and I'm not at all vego)!! Didn't see those chocolate fountains when I was there though. It's on my must-eat-again-in-my-lifetime list ha ha

j'adore: i've been seeing more and more chocolate fountains at various buffets around town. it's weird at some though what they pair up to dip in the chocolate

xiaomei: the chinese name is "Lien Shiang Zhai".. sorry I don't have writing in Chinese on my computer!

Wow fake sashimi?? Haha that should be interesting.

I went there a few times when I was in Taipei in Sept 2011. Amazing food and nice place. Highly recommended.