more addresses TBA (help! if you have one near you) 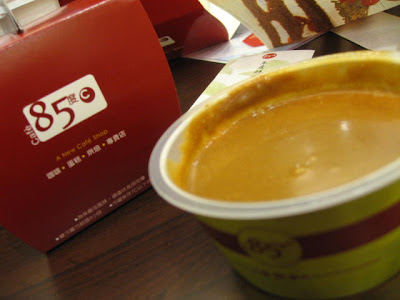 Have you ever walked into Starbucks and thought- "Man, US$4 bucks for a coffee? What has the world come to?"- then you should definitely look for 85 degrees C cafe. You can get a drink and two cakes for the price of one Frappucino, and trust me the desserts are MUCH better than the ones at Starbucks.

I can't believe that I've been here for so long and have only discovered 85°C cafe now... after having been introduced to it by a friend who offered me a slice of blueberry cheesecake she had at her house, I have been seeing the shops EVERYWHERE. Maybe it's because they have slowly expanded since opening stores the past three years all over Taiwan. Maybe it's because they are located mostly on cornershops on the street rather than in malls. Maybe it's because even now, it's hard to find information about the cafe in English besides its official website and a few blogs. 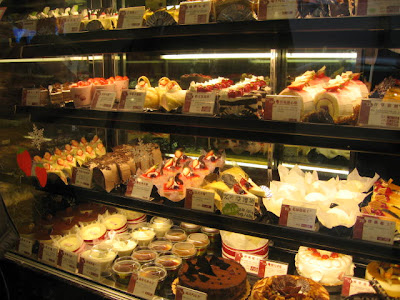 so many cakes, so little time!

Either way, you are about to thank me for telling you about this awesome little coffee shop and cake chain that offers delicious and "5 star" products at ultra affordable prices (if you haven't discovered it yourself already). I think that the desserts here give Starbucks and all the other coffee shop and cake chains, as well as many afternoon tea places a run for their money. Why? Their cheesecake is creamy, melt in your mouth happiness without being too heavy, sweet or powdery, and only NT$35! The same with their coffees, smoothies and teas- from NT$20-$60, but tasting just as good as Starbucks and I think way above the taste of local chains like Barista and IS Coffee. 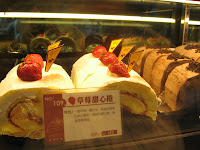 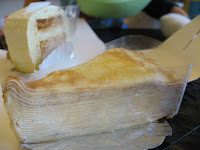 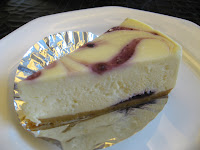 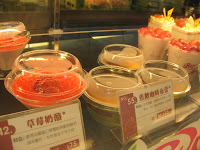 You could have an afternoon tea for two, with two drinks and three cakes for only US$5, which is a bargain compared to many of my previous afternoon tea experiences in Taipei.

The shops are bright, open and clean- most of the seating, half outdoors on a patio and counter next to a large window display of a varied assortment of cakes, panna cotta and sweets to drool over. The desserts only have signage in Chinese with prices, but their coffee/drinks have English posted on the menu above the cashier. The seating is limited, so it's hard to get a spot during their busy hours. But they are fairly quick and package the cakes so they stay intact if you want to take it home or on the road. 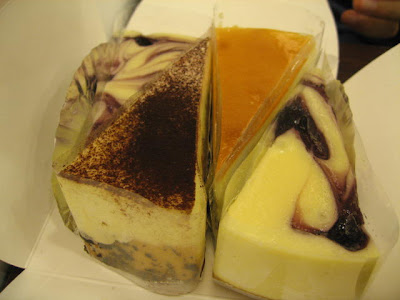 The blueberry cheesecake (NT$35) may be one of the BEST cheesecakes I've ever had, Taipei, LA or anywhere else. I think it's also better than the original plain cheesecake which I found to be a little less moist. I also could eat five of the caramel coffee puddings (NT$35) if I didn't think about how many calories they are. The sweet and aromatic syrup on top has more depth than most flans because of the slight cappucino flavor. They also have tiramisu, chocolate, strawberry and hundred layer cakes, as well as panna cottas in different flavors and more unusual offerings like this snowball. Sometimes popular items will run out, even while you are waiting in line! 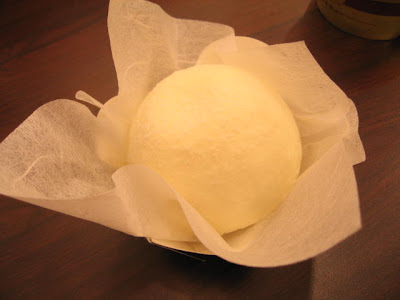 As for their more unique fare as the one above, I thought it was a mochi outside w/ cream inside, but it turned out to be more creamy outside with a crunchy center. I didn't really like this at all- I would stick to the cheesecake! If you want to take some home to share, the 8' round is only NT$240, or about US$7- which is about how much one slice at Cheesecake Factory costs these days!

As for the drinks, I liked the Grapefruit green tea (NT$35) and the Korean Citron green tea (NT$35) I had on different occassions. A nice blend of citrus, sweet and sour, it wasn't overly sugary or too sour like drinks I've had in other places. I had a taste of the Iced Coffee and it was good- strong coffee flavor without being bitter and sweetened.

So the next time you pass by 85 degrees C cafe, give it a try. Just make sure it's not a knockoff that I've heard have also been sprouting up- 85. degrees C or degrees cafe, both of which are packaged very similarly. So if you have one near you, please let us know where it is, so I can collect all the locations!

I've had this before! It's AWESOME! My aunt and uncle got a box of 4 small cakes and we divided it up and each got a taste and I loved it! I think my favorite was the mochi cake? It was so fabulous we finished it before I could get pictures. :D

mmmmmmmmmmmmmmmmmmmm.....
looks so yummy
I am drooling right now
there is one near my home (on Xin Yi Road Sec 6) and I love their cheese cakes!!

Hey Joanh,
Wow! All those cakes look delicious but yeah, definitely this place does not look like the one in San Gabriel.

Love your comments! They are awesome!
I'm about to write a businese report about 85 degrees cafe for academic purpose.
I'm just wondering if it's okay for me to quote some of your opinions over 85 degrees?

Btw, I'm a big fan of blueberry cheese cakes, too. It's the ONLY cake I would get from there lo. I've tried TIRAMISU too. But it wasn't as fantastic as it looks. I guess with more Marscarpone cheese and less sponage cake it would be great!

tiffany: yum! my favorite is still the blueberry cheesecake.

wandering chopsticks: they are opening one in the OC!!! with a whole plaza of stuff

comedian: thanks! you should try the caramel pudding. that is pretty good too. Sure, go ahead and use my comments if you reference the blog. I'd love it if you email a copy of the finished report!

There is one in Irvine now!

there is one in huan san lu, neihu near takming college

Thanks to your recommendation, I found one near my hotel (it is on the corner of Nanjing Rd. and JiLin Rd)- since I could not read the description of the cakes, I just went for the chocolate mousse one. OMG, wonderful! I will try to eat all varieties during my 6 week stay here...I only have 3 weeks more to go... :( Also tried your suggestions of Sadaharu Aoki at Bellavita - very yummy!!! Thank you, thank you! I am having a great time here in Taipei and my daughter is starting to pick up mandarin little by little...

Anonymous @3:27PM : Yes! I heard about the crazy lines there!

Aki: thanks for your comment! i'm glad you were able to find one and try patisserie sadaharu aoki too! hope you and your daughter had a great trip here!