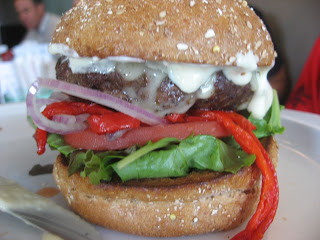 Hi everyone! I can't believe it's been so long since I last posted... I'm back in Taipei after a short trip to the states. Everytime I go to LA, I tell myself that it means time to write up and post all the backlog posts that I have to work on, but the opposite is true- I'm soo busy that I barely have time to read other people's blogs much less work on my own.

But I did take a few pictures to show and tell. WARNING TO MY TAIPEI READERS- not in Taipei! So don't browse if you are hungry, since you will probably not be able to find something similar to satiate you in Taipei. (If you can, let me know!) Ugh, I'm getting hungry just looking at the pictures again.

I ate A LOT of American style breakfasts while I was in LA. One- the jetlag and short trip made sure that I was up early and hungry, so that was the perfect excuse to go have some waffles. 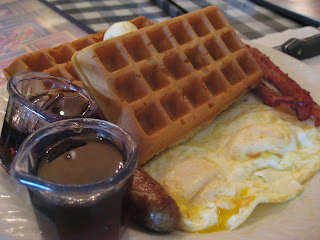 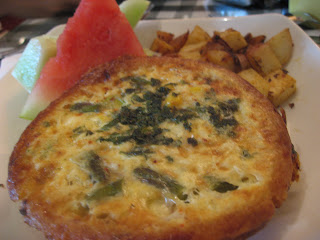 I had breakfast for the first time at Mimi's Cafe which was supersized and full of families. The food and service is what you'd expect from a chain restaurant- the muffin was cake-like, the breakfast burrito was lunch-like, I didn't taste any crab in the crab corn asparagus quiche, but we still left stuffed.

On the other hand, I savored the fluffy and maple syrup drenched french toast and a few bites of a awesome huge goat cheese, sundried tomato, basil omelette at Novel Cafe. 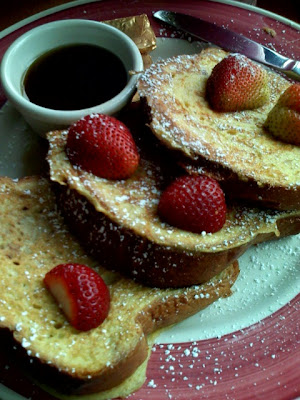 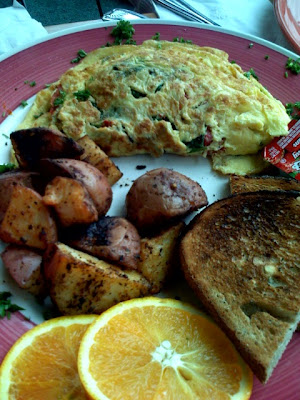 It's surprisingly usually not crowded, the service was friendly and everything (except the pancakes) tasted like it had just come out of the kitchen of someone who cared about how their food tasted and made with fresh ingredients.

I revisited my love for what I think may be the near perfect waffle at Campanile on La Brea. I even had time to make my own waffle and eggs at home, though I didn't really care for the Archer Farms apple strudel mix I bought from Target. 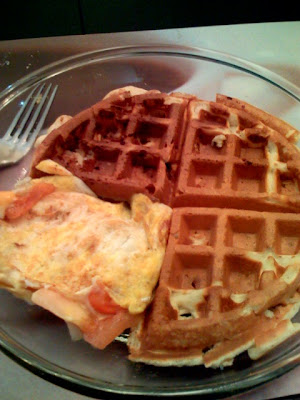 I had lunch with friends at the Westwood Farmer's Market which has moved since the last time I went. Sarah at the Delicious Life reminded me how much I wanted I wanted to go again. I bought some fresh flowers, basil and hummus, ate some tamales (get the blue corn over the regular corn and the pork carnitas) and gyros, drank a not-big-enough $2 cup of strawberry lemonade and walked around eating samples of hummus, cheesecake, fruit and honey in the LA sunshine. 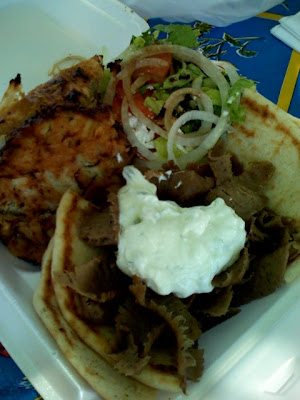 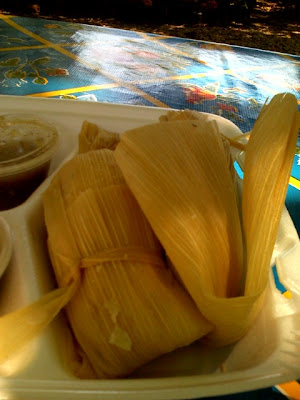 Although I don't have any evidence in pictures, I ate my share of carnitas and chicken enchiladas on this trip. The food is simple, but always hits the spot unlike the chore and surprise of not knowing what are you going to get when you "Mexican" food in Taipei.

And though I found spicy tuna finally in Taipei, I loaded up on the monster Theta Animaniac (a snowball of spicy tuna over fried crispy rice) and rolls from California Roll Factory as well as tried out rolls from Ami's. I wasn't in love with their baby lobster roll (a bit dry and well, isn't it crawfish?), but the Las Vegas roll was good, though their spicy tuna seems to have an extra dash of Tabasco than I'm used to. 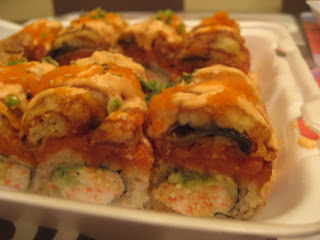 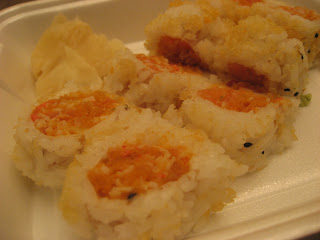 Although I had heard about Yogurtland from Elmomonster, it's not the same unless you visit it. A row of self serve yogurt machines, you can pile on the yogurt and fresh fruit and toppings to your stomach's delight, at the cost of US$0.30 an ounce. You might think the pint sized empty paper cup is too big, but it makes you (or made us) pull the levers until we had about 1 pound of yogurt plus fruit. The picture isn't pretty with melted yogurt of half a dozen flavors and colors, but it tasted good. If I had to go again, I'd get the chocolate mint, blueberry tart and mango flavors. Avoid the artificial tasting peach flavor. 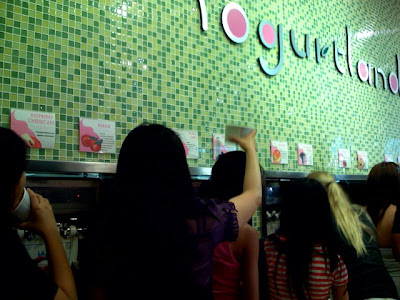 It's pretty brillant since the customer gets to do it exactly the way they like it, and maybe you don't feel like $3-4 dollars worth of yogurt, you can just get a taste. But since you don't know how much it actually weighs, you might pay more than you think. I guess the more you go, the better you'd get at doing it.

I even got to wander around a Kwik E Mart in Burbank- with offerings like Buzz Cola, Sprinklicious donuts, Squishees and other Simpsons stuff for the tourists and fans. There are only 10 in the world and who knows how long they will be around now that the Simpson's movie is coming out. I had to wait a bit for parking, avoid the kids who were trying to find the Buzz cold that one lucky girl had in line, and avoid the people taking pictures with the signs. 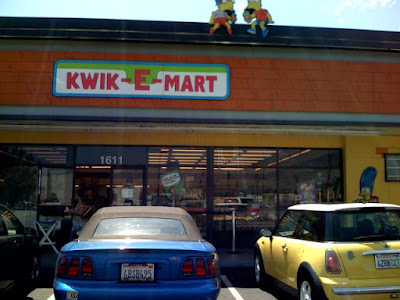 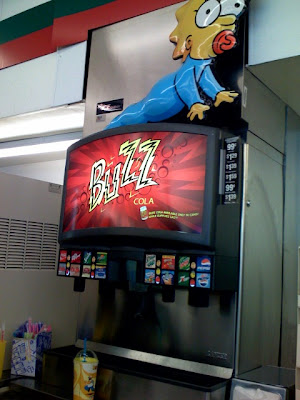 I bet the 7-11 owners wish that it could be permanently a Kwik E Mart since I've never seen a 7-11 so busily trafficked. I almost wish I had picked up some pink frosted Krispy Kremes.

Last but not least, the you could go to the Counter and eat a different burger everytime you go, since you can choose your cheese, toppings and bun. On this day, I picked feta cheese, corn salsa, roasted red peppers and onions on an English muffin which is not strong enough to hold everything. 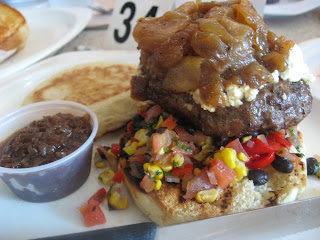 So it's back to Taipei and my love hate relationship with the food here. I've heard about a few new places, so hopefully we'll have to time to visit them!

Email ThisBlogThis!Share to TwitterShare to FacebookShare to Pinterest
Labels: burgers, LA, not taipei

welcome back joan!
was getting worried about lack of posts ;-)

damn these pictures got me hungry.
i want to go to USA now
;-))

pat: thanks! i know, i hate it when (1) a blog i read goes for awhile without updates and (2) i read a blog that has food i can't eat! i will try and update w/ taipei posts soon!

yes, welcome back.
I am going back in a month, will stay until Thanksgiving Day. That was a funny looking burger of that last picture.
I am making a list of all the food places I will be going. As usual, the Jakes pizza of Saratoga is on the top of my list. Pete's coffee in the mornings, the original pancake house....
I can't wait!!

Gah! You were in LA?! Did you try the sweet potato fries at The Counter? Soooo good. One more month here in Taiwan...I'll definitely let you know how my food adventures here fared at the end. :)

Hey! That's the Yogurtland Cat and I go to all the time. Maybe we were there the same night you were. Why you no email for meet up?

Looks like Cat and I will be in Taipei for a week sometime in February.

did you ever try that baby blonde waffles place?

Hi joan! this is emmie's friend :) I love your blog...makes me miss all the food in Taiwan. I was just wondering, has the Korean frozen yogurt craze hit Taiwan yet? I live not far from Yogurtland and love the tart yogurt flavor. Reminds me of the little bottles of "yakult" I had as a child.

Hi! I'm an LA girl who is also living in Taipei... I love your blog...but I'm so jealous that you were able to have tamales! (I'm visiting home for a week next month...thinking of checking out Osteria Mozza)

Now, there is Yogurt Me on the corner of Yongkang Park, but it is pretty much a Pinkberry clone.