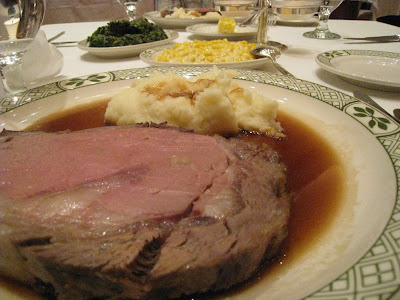 Kid friendliness: didn't see any kids that night but I'm sure they are accomodating. they have a kid's club on their website.

Surprisingly, this was my first visit to Lawry's in Taipei. But definitely not my last. For anyone who's been to Lawry's in the states, it's pretty much the same from the decor to the English maid outfits the waitresses wear to the spinning salad presentation to the silver rollcart Prime Rib. For me, it's good that there are no weird tweaks for the local palate- you get Lawry's the way that you've grown to love it. The prices are also about the same as the states, no crazy mark-up like the reliable Mac Grill and Chili's, with the menu in English and Chinese that has various size cuts for various size appetites.

I didn't realize until I took my cousin from NY that Lawry's actually has such few locations for a "chain" restaurant- Los Angeles and Las Vegas are the ones that I've eaten at... there's also ones in Chicago, Dallas, Singapore and Tokyo. I've also really enjoyed the Lawry's Carvery at South Coast Plaza in Orange County which is like an express version- prime rib for $15? Yes please!

What? Wow! On their website they said that there's one open at Century City Mall now!!! Totally eating there when I'm back in LA.

Okay, okay, back to Taipei. First of all, they are doing some remodeling at the Living Mall (which is the one that looks like a giant ball from the outside).. so you have to do some looking to get yourself to the 11th or 12th floor. We took the elevator to the 11th floor and found the entrance to which we had to climb stairs to the 12th. There was no "host/hostess" at the stairway entrance, but we made our way around to the bar/main entry and was seated. We did have some trouble when we left though- we tried to leave the way we came in, though the stairway was pitch black and then we discovered the door was locked at the bottom. So go through the entrance/exit near the bar if you come in through the stairway.

When ordering, they will ask you how rare you want your prime rib. In Taiwan, they do it by numbers. 10 is well done, 7 is medium, 5 is medium rare.

After ordering, they bring out the bread. It was served room temperature and soft- not too appetizing- I like my bread toasty. 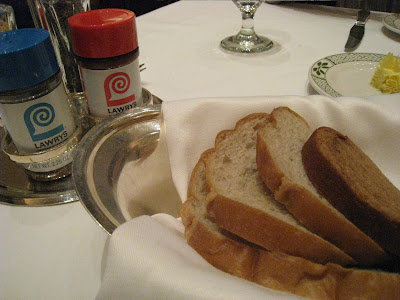 I wanted to take a picture of the waitress spinning the salad, but I didn't want to seem like a TOTAL tourist. It's fun to watch for the first time, but what I got a kick out of this time was the super cold fork and plate they serve the salad with. Their Vintage Dressing is slightly sweet and tangy, and I really like the buttery croutons. 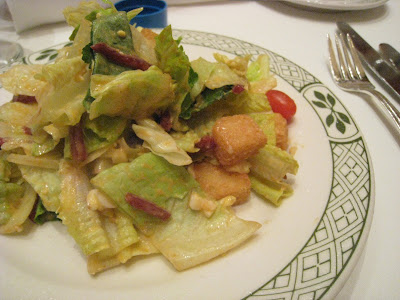 All their prime rib sets (NT$1400- $2250) come with a salad, mashed potatoes, yorkshire pudding (kind of like a soft bread) and horseradish (either creamy or grated). I suggest you also get the creamed corn side(NT$180)- it's probably all heavy cream and butter, but it's sweet and makes me want to eat the whole thing. I sometimes feel like the creamed spinach(NT$180), but it can be a bit heavy. They also have steamed asapargus and mushrooms. The sides aren't huge for the price, but shareable. For seafood lovers, they also have lobster tail and shrimp cocktail, though I find at most steak places that you should stick to the meat! 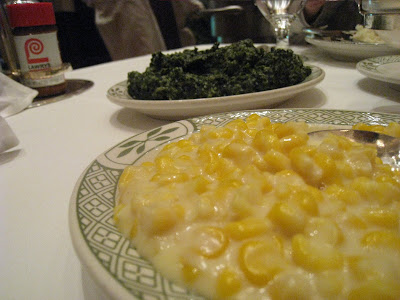 This is the Lawry's cut (NT$1590) which is their traditional cut. I didn't finish it (the leftovers were good the next day too!) since the California cut is probably just the right size, and they do a English thin sliced cut as well, which I think defeats the point of prime rib. he he.

I noticed a lot of people celebrating birthdays and English speakers as well that night. It's a nice place to celebrate a special occasion or take a date, or just go for some delicious prime rib when the craving hits you.

So how is the dress code for this place.

I so desperately wanted to go there the last two times I've been in Taipei, but both times my wife wouldn't let me because I didn't pack a suit and tie.

I'm not sure if that was just her excuse to stop me from going or a valid obstacle.

there is no dress code basically.
taiwanese are pretty relaxed regarding this.
so it just depends on how you feel how you want to dress ;-)

nice review joan.
now i am waiting to see your comparison to Ruth Chris. ;-)
I think in terms of beef quality RC and Lawry are same high quality, but since lawry only offers basically one sort of meat (roasted prime) i think thet RC offers more variety (rib eye, new york cut, fillet etc).
Service is in both places top notch, RC offers a bit more cozy surrounding though.

BTW: How did your Thanksgiving end up? Since you posted so many different options, can you tell us what you did? (homecook, go out...)

I love Lawry's prime ribs but their creamed corn is the best I've had anywhere! I always double up on that.

I've been to the one in Beverly Hills and Las Vegas many times but still will definitely go to the one here.

pat: thanks! i went to ruth chris for the first time in california earlier this year but i have yet to go to the Taipei one.. someday soon! i will try to write up about my thanksgiving, but i ended up having lunch at Robin's Grill in Grand Regent Formosa.

benny: those are the ones i've been to too! i think the dress code for las vegas is pretty lax too since it's mainly tourists. he he.

seeing this just made me want lawry's SO bad. i'm gonna have to check out the new location at century city when i go home. yummmm . .

yes the one in Vegas is very relaxed. People wear all kinds of stuff. Same goes for the one in Beverly Hills. I was surprised. Looking at your pictures at 1am makes me so hungry!

I took some work colleagues to Lawry's as a reward. The steak was pretty good and the service was par excellence. No dress code. Wines were extraordinarily expensive - but that's Taipei.
I must say though, as an Aussie, I also struggled with just one type of steak. I enjoyed the night - but I think Robin's Grill is by far and away the best Steak Restaurant in Taipei. As for Ruth's Chris - leave me out. I never understood smearing a beautifully cooked steak in butter! That said - their steaks are quite tasty.

chubby panda: it's been around for awhie.. they opened one in Shanghai too!

fashionfoodculture-life: have you gone? it's not really a full on lawry's at century city- more like an express version.

benny: i've only been to the one in beverly hills and las vegas once each.. so i can't remember if the BH one was formal or not.

dwightbandy: hi! it's not so much a steak place than a prime rib place- more of a US thing, maybe? i do like Robin's Grill a lot- you should also try Toscana (dry aged), A-Cut and No. 168 Prime Steakhouse if you like steak