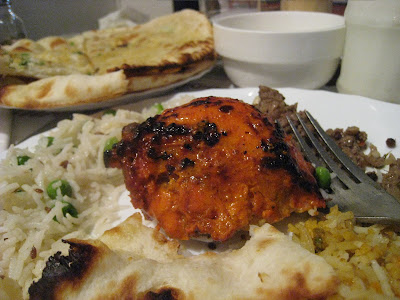 (Blogger seems to not let me upload multiple pictures.. I've been trying to post this for a month.. finally, I did them one at a time and it slowly worked! argh!)

Ali Baba's buffet (NT$399) offers up an array of curries, appetizers, seafood and vegetarian options and even self serve ice cream. They were crowded during the lunch hour, so much so that they tried to squeeze us in this tiny table by the door. A few minutes later we were able to request a different table on the other side with some persistence. 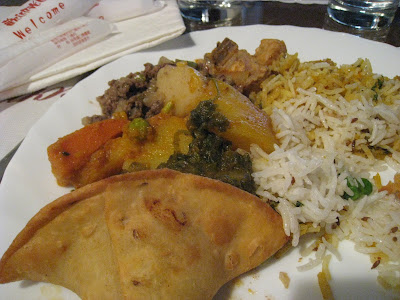 I thought the flavors of the various curries I tried were good- not too spicy to accommodate a wider crowd- and I liked that they had the option of different naans (ie garlic instead of plain) and drinks as part of your lunch buffet, as well as samosas if you could get to it in time. The naan is fluffy and crispy, not like the dense flatbread at Aaleja. 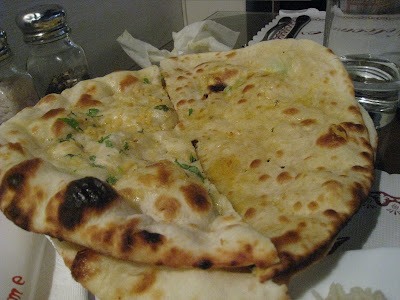 Personally, I'm not a big fan of seafood curries or seafood in Indian food, so I didn't sample that, though they offered up some fried fish and seafood curry, as well as quite a few vegetarian options. The good thing with a buffet is that everyone can pick and choose what they want and it's a good way to sample more than one dish for the price of one dish.

You might not know that Alibaba Indian restaurant is there when walking by on the crowded street... it's on the second floor and this sign hangs in the stairway entrance. 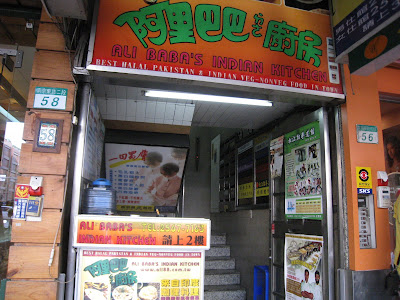 the naan looks so crispy and delicious. It's time to go eat some indian food! thanks for the reminder, but we'll have to find a good place in LA. have a good day!

Even just the name alone is fun!

Haha, just kidding. Seriously though, good tandoori is hard to find in any city, so it's nice that you were able to track down something there.

Hi Joannh,
Nice posting and good food, thank you,
have a good week

Isn't that also a famous commercial website? I had a Taiwanese friend who was really into it.

I've been browsing your blog for the last... i don't know how many hours! I love all the pictures you put up, makes me so nostalgic since I haven't been back in Taiwan for a good 7 years! One thing i found really interesting is that while you crave American food in Taiwan, i crave Taiwanese food here in Canada, because street vendor/night market Taiwanese food is the best! I think that's what makes Taiwanese food so special. I can't find anything as good here, although there's a huge variety of other cuisines here. I have to admit though if I were living in Taiwan I'd probably crave good North American food too! Great job on the blog, thanks!

white on rice couple: yeah! i am always looking for good indian food in LA too. :) it's funny that the buffets are weekdays in the states and weekends in Taipei.

chubbypanda: yes, there is some famous website bcuz the 88 is lucky!

devilgurl: thanks!! hopefully you can visit again someday and eat your favorite street foods! i know, i guess you crave what you can't have. but mostly since i can't eat chinese food ALL the time, it's fun discovering what else is out there.

hi the food is ok but their service is very slow and its not exactly the real indian food ... a little steo far on the same nanking e. road i had lunch in the westin buffet at east west they had excellent indian food better then anywhere i ate in taiwan and with lot of varities including thai food also....hats off !!!

This is one of the top three place I have eaten Indian/Pakistani food. The food quality is really good. Not many buffet places offer the type of variety that this place offers. I have eaten Indian/Pakistani food in lots of places including USA, Germany, South Korea and China. This restaurant is hands down #1. I would say it was a pleasant surprise. Fish, chicken, mutton were all very tasty. Basmati rice and Biryani were excellent


this is the worst Indian food in my life, me and my gf both got stomach problem for 2days after eating there,
i am from India and i know what Indian food tastes like, the guy is from pakistan not from India, i will never recommend anyone to go there.