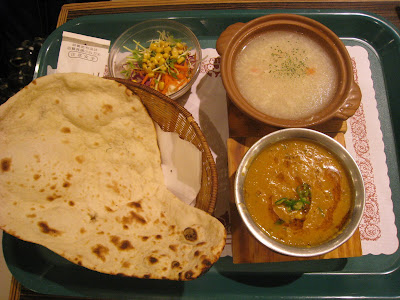 Kid friendliness: actually at Mitsukoshi they will deliver your food to your seat, rare for a food court eatery. Miramar has enclosed eating space.

It's hard to find good Indian mall food in the states, let alone Taipei. For awhile, I was in love with this tiny corner of the old Century City Mall food court, near Ben and Jerry's and La Salsa that had combination plates for about $7 or so. Everything was just right and you could a meat and vegetable curry and naan. But one day I went to fulfill my craving and it was gone. I was pretty sad. But I guess it doesn't matter since that whole food court ended up getting torn up and there's a new fancy food court with Lawry's Carvery now. hahahah

Anyways- with Indian mall food in Taipei, I've had some terrible experiences at Curry and Tea House at 101 and some okay experiences at Tandoor at Far Eastern Mall AGES ago, but Indian Palace is the first time I've had a good experience where I would totally go back. It was actually recommended by a friend the first time and a relative the second time. 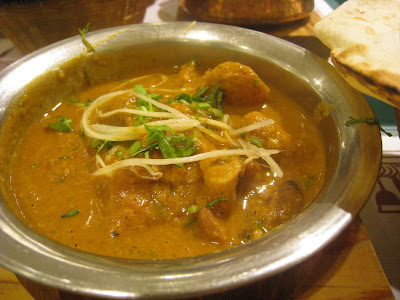 If the curry and naan are good then you can forgive everything else- the strange bland rice despite its cute heart shaped presentation, or the vague milky dessert and tea in the set menu. 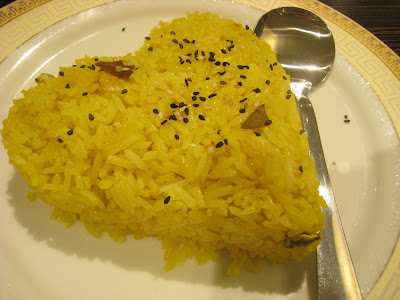 I was reminded of how pleasant the whole experience was when my aunt asked me if I wanted to get some food to go from there from the Miramar Mall Food Court the other day. 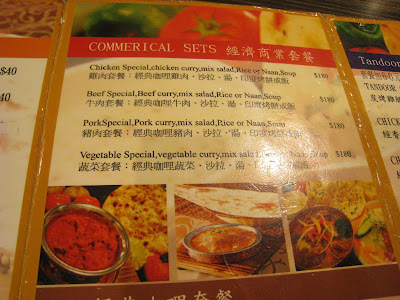 Though they don't list it on their menu, they can make Chicken Tikka Masala for you. There might be other things as well if you ask. The server was as friendly at the Miramar location as they were at the Xin Yi Mitsukoshi location. The Miramar mall has their own private seating area as the host beckons the crowd to "try something different."

The glass window into the kitchen displays three Indian chefs, one of who is making naan to order in the hot tandoori oven. It's promising when you see Indian chefs right? Like when you see Mexican cooks at that hole in the wall taco place or the Chinese restaurant filled with Chinese people and the menu has Chinese and Chinese servers (nothing against ones that don't... but generally the food seems more authentic that way). At the Mitsukoshi location, you only see their picture on them menu since their kitchen is enclosed... 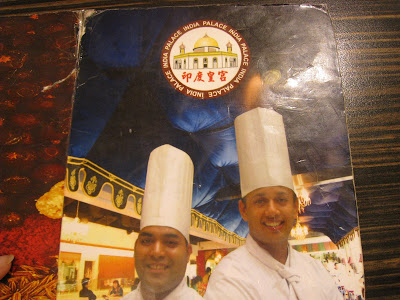 On both occassions, I tried to order samosas (NT$100 for 3) and they were "out." I wonder when they are offered as I went on different times of day, weekend and weekday at the different places. But no worries, their set menus (NT$180 - NT$250) with meat (Butter Chicken or and vegetarian options like Aloo Gohbi (potato and cauliflower) or lentils, include a small salad, soup and naan or rice. The size is pretty decent and probably about the size that the sit down restaurants offer for a higher price.

The curries seem quite similar to what you'd get, not too watery, not too thick. The aloo gohbi was interesting in that they cut the potatoes in slices instead of dices and there was a lot of curry rather than the drier variety I'm used to in the states. But tastewise it was fine.

My aunt also said that the tandoori chicken was too spicy the first time they ordered it, which I found strange, but not THAT strange after my visit to sit down Tandoor where EVERYTHING including the tandoori chicken was crazy spicy. So wander down to Indian Palace next time you feel like something other than Chinese mall food, be clear about how spicy you want stuff, feel free to ask if there is stuff off the menu, and let me know if you actually get some samosas!
Posted by joanh at 5:49 PM

Have you been to the Taipei Main Station since Breeze Center took over the second floor food court? Its a very nice place now. There is a curry section, mainly servers Japanese and South-East Asia style curry. I am not sure if there is an Indian curry place because I was hungry for a Japanese curry/pork cutlet plate.

ron wu: i heard about it but haven't had a chance to check it out yet!

Thank you very very much for your recommendation. There was no original taste and favorable price indian curry in Breeze Center on 2nd floor of Taipei Main Station. They have asked us to open a restaurant there but the terms are not compromised. May I inform you that starting from 1 April 2008, we will have branch opened in Taipei 101 food court? You are very welcomed to taste the Indian appetize there also. And also end of this year or early next year, there will be a brand new building close to Taipei Main Station opened. We will have our new Indian Palace restaurant inside. Within this building, there are five stars hotel on top and Warner Cinemas downstairs also.
When you come to our Indian Palace, you can specify and ask for your requirements. Regarding the Samosa, there is no facilities in A4 but I will check why Miramar does not sell you the Samosa.
Regarding how spicy, I think u should tell the front desk during your ordering. Well, again thank you very much for your posting.
Indian Palace.

indianrestauranttaipei: thanks so much for the updates. looking forward to trying the samosas at 101. i was happy to recommend it because i think the flavors are pretty good. i agree, the indian food at breeze main station didn't appeal to me at all. let us know if there are more updates!

Next time when you like to order the samosa, you can call to our Miramar shop telephone number 02-21753210 to book before you go. I have asked them to prepare for you before you come. MiramarIndianPalace 02-21753210

You are always welcomed to visit our restaurants above. You can order by telephone before you arrive.

I tried this Indian restaurant at ShinKon Mitsukoshi and it was quite good.

If you want to cook delicious Indian recipes like in the restaurant, I recommend these Authentic Indian Curry Recipes

I had food in their a 4 mall last time the food was nice but service girl she was so rude and horrible b coz she was fighting with one of indian guy and abusing horribly ....oh man!!!

hey guys if u want to beat the heat of indian food you can enjoy indian food at the westin at nanking road they just have start real indian and thai food which is awsome....enjoy!!

Indian palace restaurants in miramar , A4 , 101 , jhongli , taichung and Q square all sucks.....i agreed they have indian chefs but the quality they are producing is d grade as per indian food standards all of them are from road side corners shops and does not belongs to real indian 5 star hotel food ....uncooked curry with smell and chicken powder taste are serving these days here in all Indian palace restaurants....I am customer of yours from past 3 years but now i am sorry to say food is really bad !!!

I hope you are not telling these bad word on behalf of one of our Indian chef who is fired / dismissed by us end of last year. He is now coming back to Taiwan and revenging us. He wants to beat all our 16 Indian chefs down and gone. If he likes, please ask him to go ahead. He doesnot think about how bad himself. He did bad curry even Indian customers do not eat. He as a tandoori chef fold the naan like a round ball. His naan always not fully cooked. He is so proud and arrogant. He thinks that he speaks English and he is superior than other.
We have given him much much more than what he should get.
He is welcomed to challenge all sixteen Indian chefs from us.
Thank you

How POOR the Westin Hotel is? They hire the Indian chef who is fired and discharged by his previous boss(es).

The Western Hotel Indian food is so POOR so that their CHEF has to stand along on roadside of SI LING NIGHT MARKET to sell their lousy Indian naan and curry.

take care of your business ..which is ruining by some of ur best chefs......ha ha ha

improve your english and spelling first ...hope you are not from hk or malaysia....nor speak 'hakka'

god given you so many chance ..but u didn't listen...effect i.e.

1. your chef's distributing their c.v. under ur nose

2. selling you and your company and bla bla bla...ha ha ha

but still we are not doing silly and stupidity like some coward ppl who are sending fake lettters...these stupid things can't move a ddiiiiiccccccckkkkk !!

what you are talking about ??
this is a public forum please do not make it a ...hope you can understand

The ha ha ha post is written by the Westin Hotel Indian chefs and the photo is posted in front. Please everybody open big eye to look at them.