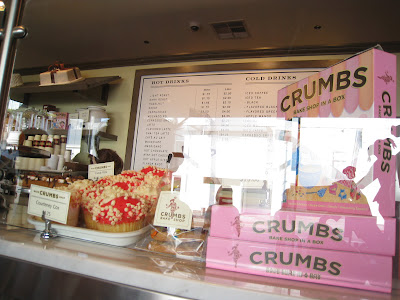 The first time I spotted Crumbs was in Glendale and I delighted in the classic looking storefront and array of oversized, colorful cupcakes. I think I had the red velvet and something else, and it was a bit drier and too sweet than I had hoped for. I love the red velvet from Auntie Em's and I compare every cupcake afterwards to it.

Last week, my sister was raving about Crumbs to my cousin who had yet to try it, so I tagged along hoping the Beverly Hills location would be tastier. Sprinkles still had a line in front when we passed by on a weekday afternoon and a little bit more east on Santa Monica was Crumbs. You can get cakes as well as cookies, brownies and cupcakes (US$3.75) as well as a sampler pack of mini cupcakes. 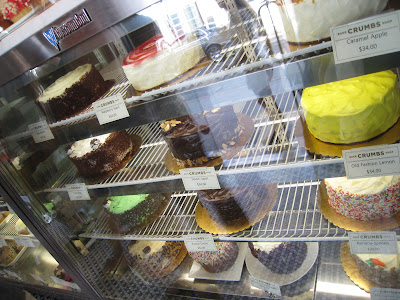 They were out of red velvet that day, so we quizzed the girl at the counter about the different cupcakes to decide which ones they wanted to get. There isn't any descriptions in sight, so you might end up waiting behind someone like us who doesn't know what they want.

They ended up picking Brownie which was chocolate overload with brownie bites and fudge on top, Hostess, inspired by the original Hostess chocolate cupcake, 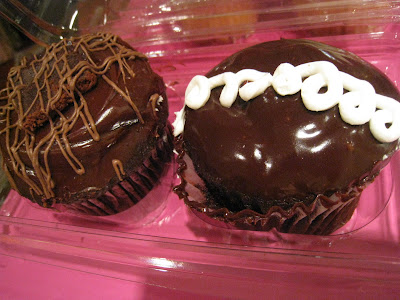 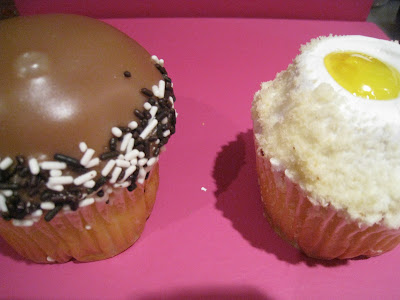 I like how they packed it up in custom cupcake holding plastic containers, so that the frosting is untouched when you transport it home. There's only a few outside patio tables to eat at there, so most likely you'll be taking your cupcakes to go. I noticed a few people eating their cupcakes next door at the gelato place. 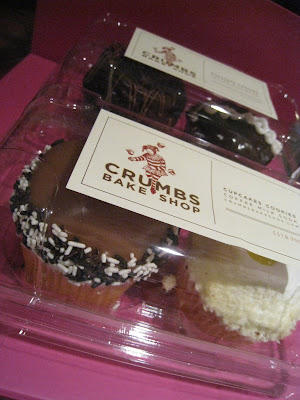 After sampling all of them, I had wished there was more whipped cream inside the Hostess cupcake (I barely saw any) and none of the cupcakes made me want to devour the whole thing. Which is probably a good thing in disguise, right? I don't think that the cake itself is as moist as I've had in other cupcakes, but I do like the variations of cream cheese frosting they have.

Crumbs has its fans and shops around LA and NY, as well as ship cupcakes via UPS, so you can decide for yourself if you are set out to give every cupcake eatery a try.

Where are your favorite cupcakes from?

crumbs.com
Posted by joanh at 1:55 AM

J-
my fave crumbs cupcake is the apple pie one. :) the mocha one is pretty delicious also.

I'm glad to see you blogging about Cali places too :)

How does Crumbs compare to Sprinkles?

This looks scrumptious! The presentations are very creative and the ingredients sound delicious. I haven't caught up to this trend with cupcakes. Never have had cupcakes other than from homemade or from the supermarket. I am so behind...

I have not tried Crumbs yet but my favorite cupcakes place is still Lark in Silver Lake. Their red velvet cupcake is the BEST around LA in my opinion

lin: I like Sprinkles better, but only after retrying Sprinkles again recently.

EatTravelEat: I agree, their presentation is very creative, but the taste is not my favorite. This trend is definitely pricier than homemade and supermarket!

Nanciful: I'll have to give Lark a try! Never heard of it. My favorite is Auntie Em's in Eagle Rock!

my favorite is the artie lange and red velvet, oh and the reese's pb too! i tend to like crumbs better than sprinkles. also i heard of a place called yummy cupcakes in santa monica that i heard is really good too.