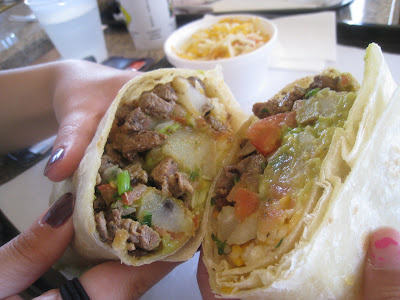 Diced potatoes hanging out harmoniously with carne asada, guacamole and salsa. Sounds like a weird combination, but ever since my sister introduced me to it, I was weirdly addicted. If you come to San Diego, you'll have to look for it, as well as the carne asada fries. Just sounds so wrong, yet so right, right?

I'm going to do something extremely mean to my loyal Taiwan readers, which is post pictures of So Cal Mexican food- which currently is not really existent in Taipei. So anyone thinking about starting up a business, take notes from these pictures and copy away.

After sampling a bit of everything, my favorites to order are the California Burrito and the rolled tacos which are fried and topped with heap of gucamole and cheese.

You can't really tell, but there's an enchilada also on the left side of the plate underneath all the shredded cheese. Next time I wouldn't get an enchilada here because it wasn't baked- more pan fried with sauce on top- so didn't have that soft melding of flavors that I like about an enchilada. 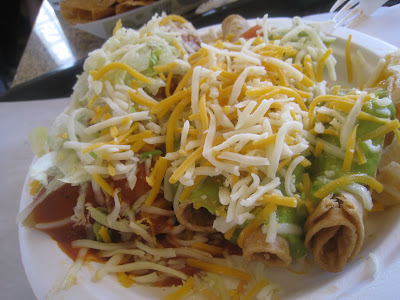 The soft tacos (about US$3) are regular sized (not mini sized) so you don't need to order as many. I also liked the steak over the pork, and the al pastor, or spicy pork was a bit too spicy for me. 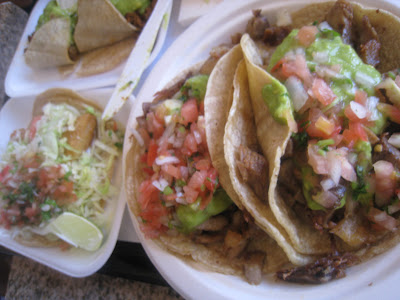 Check out the huge menu the next time you're looking for a quick bite in San Diego- maybe on the way to Comic Con or Sea World- or some carne asada fries. They also have some shrimp specials handwritten on a sign on the wall if you're looking for seafood. 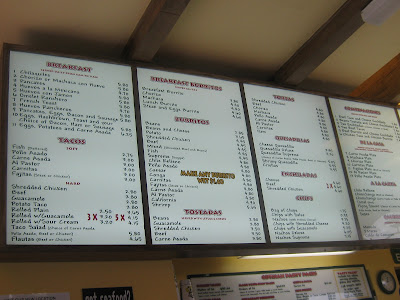 Can you tell I'm loading up on Mexican food before I return to Taipei in a few weeks?

gotburritos.com
Posted by joanh at 7:00 PM

Email ThisBlogThis!Share to TwitterShare to FacebookShare to Pinterest
Labels: mexican, not taipei

This looks way too good! There is another place I liked in San Diego too, they make their burrito with hash brown. You would not think it tastes good, but it is delicious! I can't remember the name or the place, but it is near Mission Trails in SD.

Some of us are still stuck in Taiwan and wishing we had this food. It is like a bad tease each US post you have.

Oh yum! I go here all the time and love the CA burrito.

Ahhh, I adore carne asada fries. You can't find them anywhere outside of SD, it's a shame...

beuk: sorry!! i'm noting these places for the next time i need to eat there!

kirbie: have you had the carne asada fries there?

gaga: i know! it seems like it could be popular in LA too!

hmm the red sauce is the best at Coti's

Brings back good ol' memories at UCSD during Midterms and Finals...one of my favorite 2:00am spots!

If you have time you can also try Lolitas on Convoy (I think it's in the same plaza as Cali Pho). Their California burrito is a bit different than Coti's. And don't forget..super nachos on Mira Mesa (Roberto's #2)!

there is actually a place in LA that has carne asada fries (alberto's?) but it wasn't as good as SD. i haven't tried the fries at cotixan's, but they're REALLY good at roberto's #2 in mira mesa!!

Yup, I've had the carne asada fries. They are good! I also love the nachos supreme topped with carne asada. Yum!

anonymous: I didn't have the red sauce! hmm..

Richard: I'm not in San Diego anymore, but I'll definitely make a note for Lolitas. I heard about the asada fries from Roberto's #2! I bet their nachos are good too!

Jean: i'm sure the asada fries in LA are better than all the mexican food in taipei! lol

kirbie: mmm. all this talk of nachos and carne asada makes me want to have some right now.

oh my god Coti's! I lived 8min away from there. saved me the trouble of cooking when I had evening classes.

Totally agree about the enchiladas.

get a chance to try the taco truck while you were there?