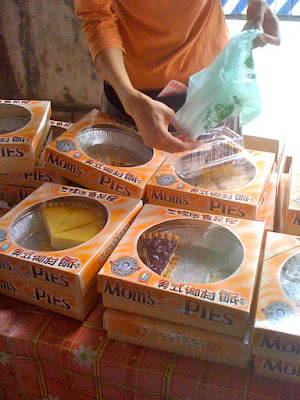 website: imomi.com.tw Chinese and English (worked for me in Taipei, but not in LA)

Kid friendliness: some flavors might be too dense for kids, but what kid doesn't love pie? 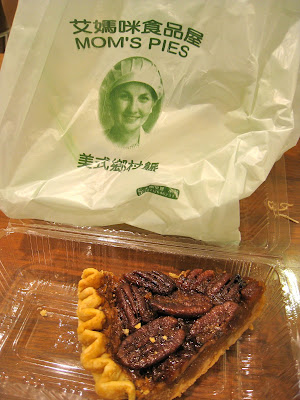 Taipei is a city full of desserts- you can easily find cake-by-the-slice in every coffee shop or bakery; fruit topped shaved ice or scoops of ice cream for the summer days; colorful macarons and delicate napoleons, and now even frozen yogurt.

Pie seems to be an elusive Bigfoot in the world of Taipei desserts. Look long enough, and you'll find it offered on the menu of a few American places like Jake's Country Cafe, ACC, or the Diner, or your best bet for pumpkin pie around Thanksgiving time- Costco, or randomly in the basement of Sogo at a little shop called Rose Pie.

When I was craving a slice of lemon meringue pie a few years ago, I started searching for pie places in Taipei, and started hearing about Mom's Pies. It sounded so mysterious. It was sold off a truck? Would it taste American style homemade like its name promised? Most importantly, was it good?

So when I was having lunch with a friend at Happy Korean and spotted a woman at the table next to us with a bag that said Mom's Pies, I quizzed her about where she got it. She said it was just right around the corner of the restaurant, on the sidewalk across the street from AIT, and kindly gave me her flier. 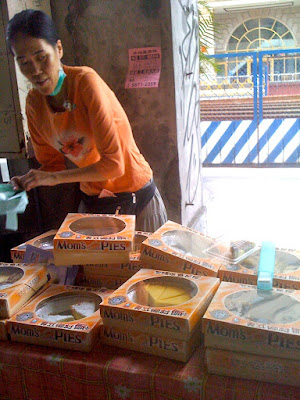 So my friend and I paid the bill, hurried outside and sure enough, a woman with a table full of pies was on the street corner. We'd found Bigfoot! I'd heard about it for so long, it was weird to finally see it in person. Although some people would think twice about buying a pie from the street, this made sense to me since Taipei is a city where you could buy practically anything from a street vendor, before LA was the city where you could buy almost anything off a truck.

But instead of a truck, Mom's Pies has been driving a van and selling it around different spots in town from Tuesday to Friday- the updated weekly schedule can be found on their website, though it is only in Chinese. You can also call for free delivery if you order more than 2 pies.

But still no lemon meringue. :(

The slice of pecan pie(NT$45) was full of large pecans and had a good sweet, sticky filling and the crust was flaky. A whole pie of the same flavor is NT$300 with 8 slices. 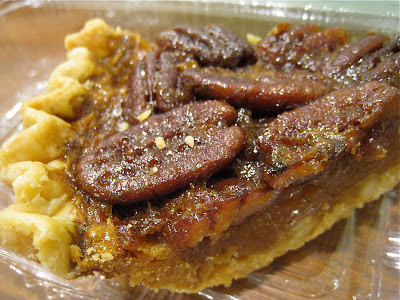 I've had their cheesecakes after finding them this day- coincidentally, someone gave a relative of mine a pie of different slices (NT$360) and their cheesecakes are dense and a bit heavy. They are so thick that you could pick up the whole thing by the slice and it would be a solid piece. The red bean and green bean flavors also kind of weirded me out (not really American homestyle), but I want to try the peach and apple in the future.

Where have you spotted Mom's Pies and did you give it a try? What's your favorite flavor?
Posted by joanh at 10:49 AM

Yes! Give me pie. These look amazing! Do you think they'll ship to Taichung?

Hmmm, may be I should try to construct a pie myself and post the recipe on Baking Teensy?

I've never tasted a sweat flavor pie. Seems that it's very normal in western country? It reminds me of the food called egg tart which is very popular few years ago.

It was very interesting for me to read this post. Thanx for it. I like such themes and everything connected to this matter. I would like to read more soon.

i actually saw a fan selling in Shida area.. it was near the red light at Shida Night Market. wanted to try one, but i was too full already..

I wish we had a place like this back in Seoul.

Or here in Honolulu, for that matter.

Marie Callendar's, where are you?!

Pie vans in taiwan?! Too awesome! I need to go to taiwan and find this van!! so how do the pies compare to american pies?! I always think pies in asia are weird bc they can never get the crust right. and pecan pie in asia?! that is a definite first!

"Taipei is a city full of desserts"

mom's pie goes to shidong market on wednesdays. i LOVE their taro pie.

I bought this pie today! I ate the blueberry one already, very good. I also talked to the lady, and this is what she told me:

Friday: near Eastern Ice Store 東區粉圓, although you would need to let her know in advance if certain flavor you want.
http://www.efy.com.tw/

jar of buttons: maybe!! it's worth asking. haha

Happy Life: sweet flavor pies are definitely more common in US... that's true that the egg tart is kind of like a mini-pie! haha

Anonymous: thanks for commenting!

Maria: haha, thanks for commenting! hopefully you'll see them again.

kushibo: i think there are pies in honolulu!! no?

Dessert Obsessed: haha! the pies are more dense than american pies, but the pecan pie and crust were pretty decent!

Roger: it's a good thing and a bad thing! haha

Shannon: thanks for commenting!!

Virginia: mm, i haven't tried the blueberry! thanks for sharing the locations and dates!!

I thought it was an excellent blog, that information has been very helpful in my life, I am a desserts lover, so I really enjoyed this reading, this weekend I want to do one! Thanks for this great moment!

hey guys I really like this blog is pecan pie recipe I prepare with my mother and we loved, thank you for the information muchimas I love this blog.

when i was in my high school (in Taiwan), they used to come roughly once a month and they will all be sold out about 3 hours after.

OMG it was totally one of my high school memory!!!!!!

(strongly suggest green bean. I used to buy two and make one cheese pie and one green bean pie <3)

Awesome! I'm stuck in Taipei during Thanksgiving (and looks like many more starting next year)... getting that pumpkin pie! Most excellent blog!

Hi all, if you have not heard of Grandma Nitti's Kitchen and its sister shop My Sweetie Pie, you should try their desserts. They are off Shih Da Rd in lane by the Hang Ten store.
They have an awesome traditional deep-dish apple pie, plus brownie cake, oreo cheescake, carrot cake, and lots of others. In the fall & winter they always have pumpkin pies and do takeout orders of everything, Plus i think local delivery. Go to Facebook, look for Grandma Nitti's Kitchen

There is an online pie shop called "Eva's Pies" (the owners are in Kaohsiung) which sells lemon meringue pie (should be good).