brunch/western: i recommend THE DOOR 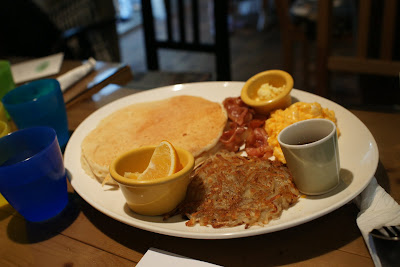 Kid friendliness: no high chairs but a few strollers spotted 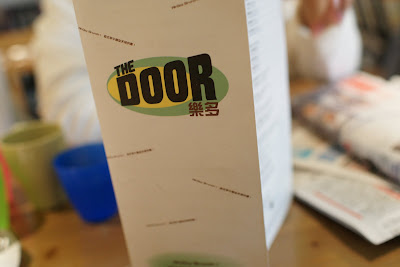 If you live in Taipei long enough, one of things you start craving (besides Mexican food) is a hearty American breakfast. After awhile, even the thought of IHOP or Denny's sounds good, where you can get breakfast for dinner, lunch or breakfast. So where to look if you're too lazy to make your own pancakes, french toast or eggs?

You can try hitting up the various hotels in Taipei, like I did once with my cousin on the prowl for a good waffle in Taipei, but that can be pricey and their window for breakfast stop once the clock hits a certain time.

Those that have shared that craving with me have probably heard of the Diner- one of the most popular breakfast places in town to get your omelettes, pancakes and American style breakfast everyday, all day. Or there are a number of other players in town including Posh, NY Bagel, Hsiang Brunch, Good Day, Swensens. 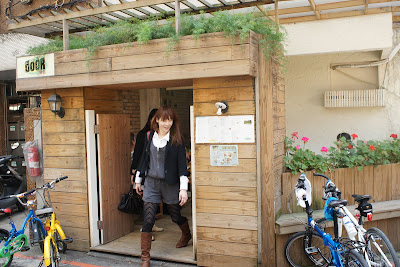 So it was only a matter of time that the Diner concept would spread to other parts of the city and when I heard about the Door, I had to give it a try. A cozy, cafe-like, all day breakfast spot tucked in the alleys in Dazhi, the Door is too similar to the Diner to be a coincidence. While researching both for the blog, I realized even their Chinese names are similiar! The Diner's Chinese name is Le Zi (or Fun) and the Door's Chinese name is Le Duo (or Fun More or More Fun) 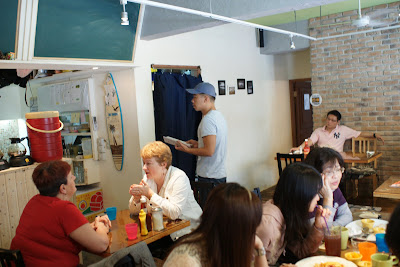 The biggest piece of evidence is the menu and the execution of the dishes- one glance at the menu and Diner fans will probably be feeling dejavu- items are pretty much in the same order and style as the Diner, with pancakes, french toast, breakfast burritos, eggs benedict, omelettes, hamburgers and menu items like meatloaf, country fried steak, pasta and lasagna. 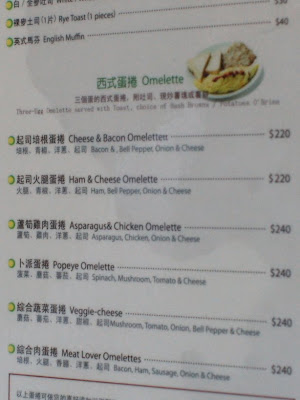 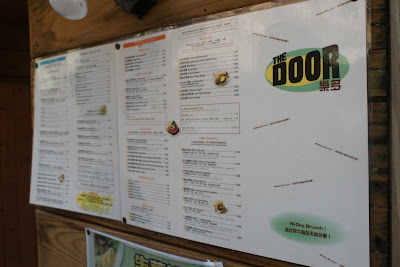 But perhaps the fact that the Door is just like the Diner is good thing for the residents in Dazhi- they'll have a breakfast place to patron without having to leave the neighborhood.

The Asparagus and Chicken omelette was fluffy and stuffed with diced chicken, asparagus and melted cheese, but the potatoes o'brien were a bit soggy. 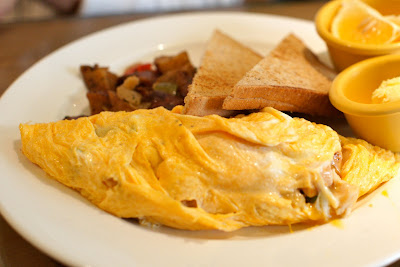 I'd also recommend the plain pancakes plate over the blueberry pancakes as there were so many blueberries in the pancakes, it was a bit overkill. They were also canned blueberries, so it wasn't as fresh tasting as it could have been. 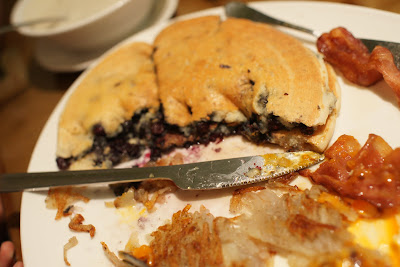 But the regular pancakes were perfectly fluffy and soft, best eaten hot. 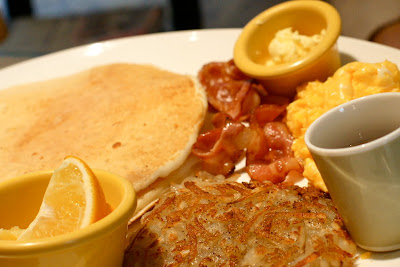 I actually wanted to try the burger and so I got a Swiss and Mushroom hamburger which I did enjoy. It had a thick patty and plenty of cheese and sliced mushrooms. The meat to bun proportion was good and the bun tasted like an American bun should, not sweet like some Taiwanese buns. 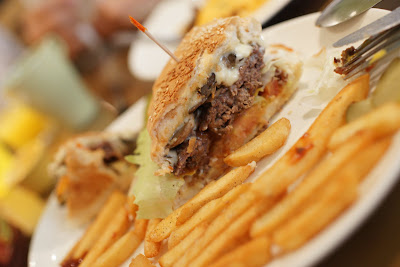 The Door doesn't take reservations, but we were able to snag a table for 6 without a wait before noon on a Saturday, but I can't promise you won't have a wait! It might be a bit tricky to find or park, so take a look at a map before you head over.

Don't order lasagna there, it's truly awful and soaked in old grease. But they did take it back and I didn't have to pay.

I know it's not food related but their logo is just like the Lush logo.

masha: ok noted!! no lasagna. but that's good you didn't have to pay. some places don't care and don't take it off the bill.

jar of buttons: AHH! thanks! i was trying to think, why does it look SO familiar, but it wasn't like the Diner's logo. yes!!

nice to see you applied the new blogger template designer... now you can make the photos more bigger so we can really go hungry! : )

thanks mike! what i can't figure out is how to put a photo in the top header area like you do on your blog??

Go to Layout-Page Elements and click edit Header. Inside you can insert your custom-made image.

This place is actually close to my home. I like its egg benedict. Rumors said the owners there came from The Diner, but no one really knows.

hamper: i want a good waffle!

Mike: cool thanks so much. i'll check it out!

orangesoda: yeah.. i'm really curious! they must have someone from the diner.. it's wayy to similar.

dennis: awww. thanks for letting me know. i have days when i want to switch the blue to pink too. hope you'll still read!!

one thing i've noticed is that their cook is a little overzealous with onions. he puts them in everything he can, and he puts *a lot* of them in certain dishes. if you don't like onions make sure you tell the waitress.

I waited too long, about one and a half hour my food still pending ，wasting my time