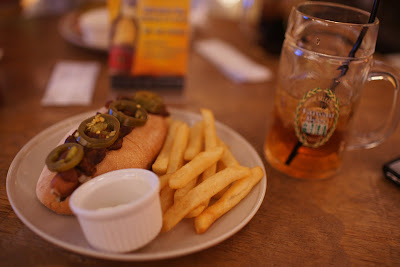 Kid friendliness: eating area is in basement so stairway down may not be stroller friendly; space is dim with a few quirky decorations, some that might be inappropriate for young children 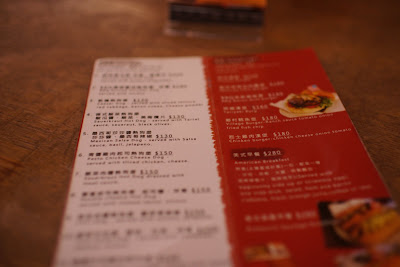 What's the hook for HOOK? Well, in a city where the consensus for Best Hot Dog is frequently Costco, the idea was a good one. A hot dog place with everything from chili dogs to cheese and onion dogs with a side of fries and an ice cold drink. 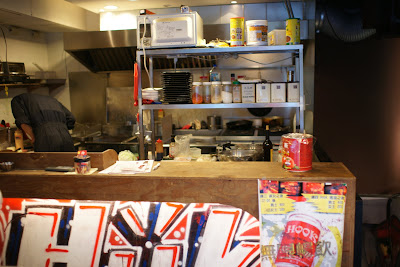 Some places, like pizza joints and sushi bars, are meant for open kitchens where you can admire your food being prepared. But hot dog ingredients are not as drool-worthy as seared tuna and woodfire ovens. 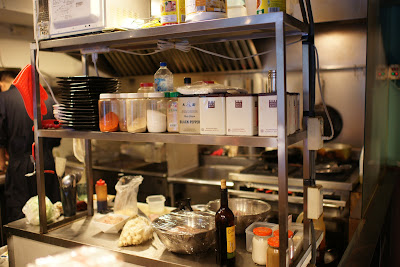 But you're not really meant to look too long at the kitchen- instead you'll head down here. 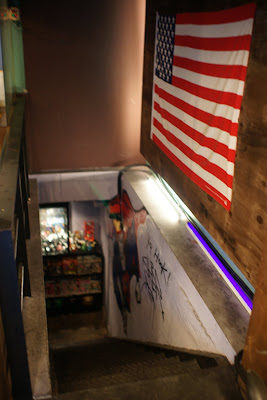 It felt kind of like being in a college boyfriend's garage/frat house bordering on creepy- memorabilia and graffiti on the walls, a B-movie on the TV screen, 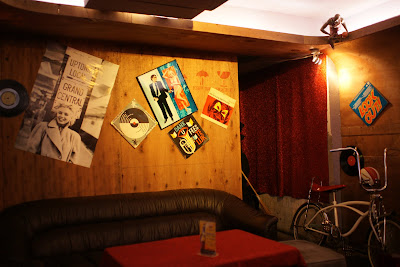 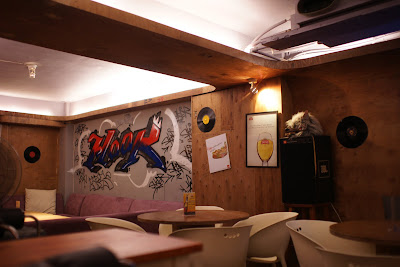 and a weird mannequin with a scary mask in the hallway entrance that startled us for a second since we were the first customers there. 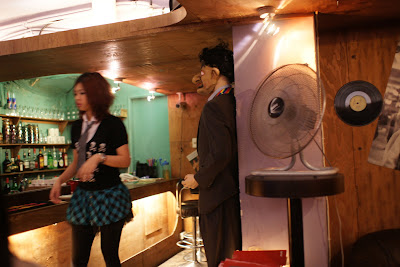 The English and Chinese menu had a dozen or so hot dog options, along with some random appetizers and desserts like quesadillas, bbq pork spare ribs, pesto or meat sauce spaghetti, caramel waffle and brownie. To remind you that you're in Taiwan, the menu offers up some unusual options like tuna salad dog, Korea hot dog, curry hot dog or tuna cheese hot dog. 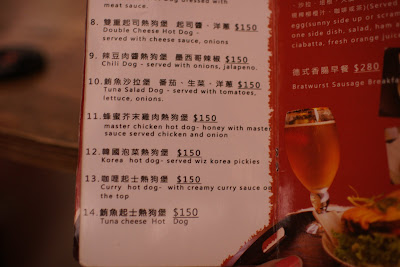 I ended up sticking to the basics and getting a chili dog. I wanted to get it with some cheese, but they said their cheese was the nacho sauce kind rather than the shredded kind, so I opted without it. You can order just a hot dog (NT$130-150) or make it a combo with fries and a drink by adding NT$80.

Our heavy mugs of ice cold drinks came quickly, but our food didn't. We were wondering if they forgot our order somehow as we asked about it a couple times since we were the only customers there. Eventually, another table arrived and so did our food, probably about 20-30 minutes, which is pretty long considering we just ordered hot dogs and fries.

We waited f-o-r-e- v- e- r and the restaurant only had us two customers- I can't imagine how long the wait would be if they were semi-full.

By the time our food came, we were starving. My chili dog with jalapenos was spicy and too much for me, even after taking off the jalapenos. I'd consider myself being able to eat a fair amount of heat, but the chili powder and bits of jalapeno in the chili was so overwhelming, I had to scrape most of it off after a couple bites. Perhaps it's good for those with an iron tongue, but I prefer my chili to have a little bit of sweet to go with the spicy. 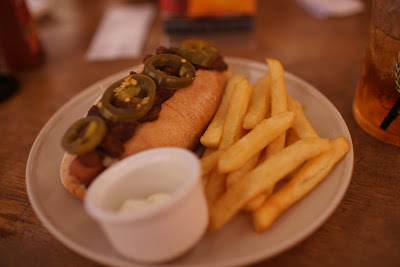 The bun was soft and chewy, but the hot dog was a much smaller than expected. Tiny for the price. The fries were crisp and devoured quickly with a mysterious white sauce that I think was garlic mayo. 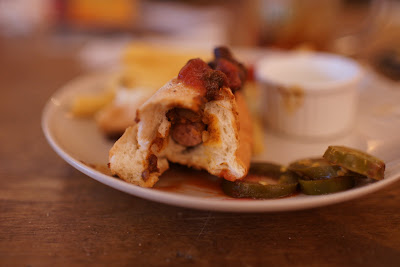 The worst part of the lunch is that an hour later I felt awful- I was meeting up for afternoon tea with another friend and I could barely sit up at the table. I just wanted to lay down or throw up and drinking a bit of warm water helped. I can't say if it's coincidence or not since my lunch date, Tina from ablendofboth.com didn't say she felt sick afterwards, but then again, she didn't get a chili dog. I felt sick that whole night and most of the day afterwards, but luckily recovered for New Year's Eve. I won't say that "I don't recommend" Hook based on one visit and one menu item, but I probably won't be back there anytime soon, especially for the price.

So in my book, Costco is still undefeated champion for best hot dog, and it comes with a drink for only NT$50. You can eat 4 for the price of one from Hook.

Uh oh, doesn't look good! I got sick around the same time too :(. Agree that this is not a good deal- the plate almost looks like this should be a kids meal and not a full sized adult meal.

Did you get a new camera or something over the past months? Photos look a bit different and the size is too...

hi ETE! yes, i've had a new DSLR for about a year now and have been using it more and more for the blog. sony alpha with a really nice lens

When will the 2010 restaurant winners be announce?

Food issues aside, what an unattractive-looking restaurant! Your description of the decor seems apt.

Seems unlikely that they're making the actual dogs themselves -- they're probably just getting them in bulk from Costco or somewhere anyway...

and here in the States--Costco still has the best prices for the best hot dogs. Joy and I eat some every Monday night after we leave the gym (why else workout?) They're 2 for US1.50 here in the Raleigh Costco.

anonymous: thanks for the reminder!! i'm almost done.. need to get cracking on finishing it.

Wouldnt recommend this place at all. Found a small roach in the food, and was still charged for the meal.

Sorry, ignore that last post, it wasnt HOOK, it was Forkers, the burger joint over at ZhongXiao East