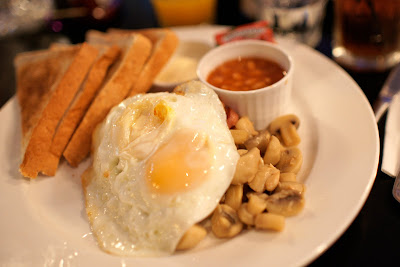 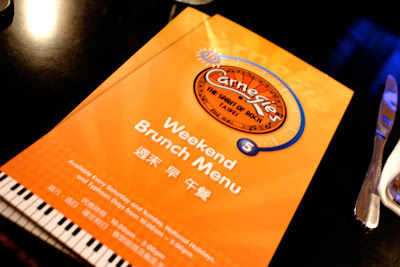 I have fuzzy memories of going to Carnegie's once when I first started spending more time in Taipei in 2004. Mostly I remember that it was dark and loud and there were lots of drinks. So even though I'd heard for years that they had a weekend brunch, I never managed to make that connection of wanting to go there for brunch over its next door neighbor, the Diner. Bar by night, brunch by day?

So when one day a friend chose it for brunch for our large party of 12, I was excited to finally give it a try. Inside, there's lots of tables and room for big groups, though the lighting is still a bit dim if you're not sitting near the patio- perfect for those who had too late of a night out, I suppose. 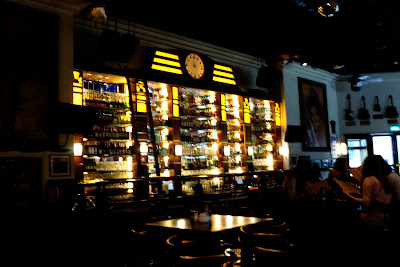 Their brunch menu includes English and American breakfast plates, cheekily called "The Big One" or the "Not So Big One" as well as pancakes, french toast, eggs benedict, omelettes, sandwiches and desserts. 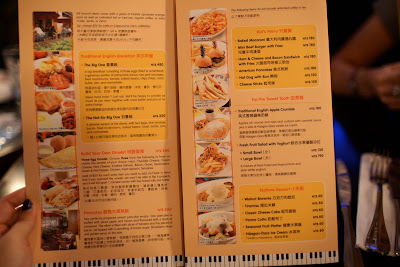 I ended up ordering the "Not So Big One" (NT$320) which had plenty of English breakfast on the plate, with 2 eggs, sausage, bacon, fried mushrooms, baked beans and toast. The breakfasts also come with a small glass of fresh orange juice and choice of coffee, tea or soda. 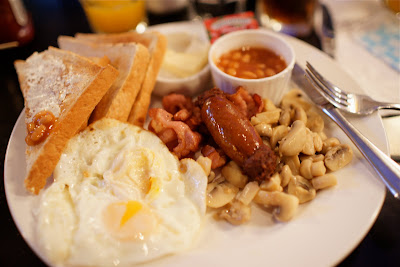 My favorite thing about the dish was the bacon- fatty and juicy, over the slightly dry sausage and underseasoned mushrooms. I only had one half slice of toast- four half pieces was definitely too much for me.

My friend V ordered the pancakes, (NT$260) which looked a lot more like blintz or crepes, rather than the fluffy round golden pancakes that you'd expect. One is stuffed with apples and raisins and the other with bananas and bacon. I didn't give it a try (as you know, I abhor raisins), but my friend finished it and said that the dish worked. 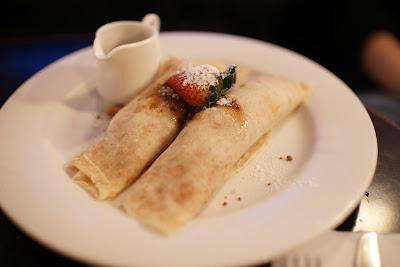 They do have the typical American pancakes (NT$180), at least on the kids' menu and were pretty fluffy and tasty.

Other orders around the table included the ham and cheese sandwich with fries (NT$180), American breakfast and french toast. I didn't get a photo of the plate of large french toast, but it was pale and dry and didn't look like it touched a griddle or had any egg on it. My friend who ordered it was quite disappointed and didn't finish the dish. 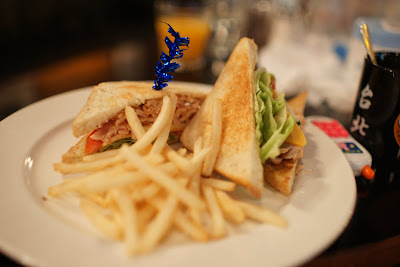 The verdict on brunch at Carnegie's after all these years? Well, if you don't want to wait at the Diner and have a large party, then you could consider it. Otherwise, next time I'd probably still stick to other brunch places unless you're craving an English breakfast which is a unique offering for them in Taipei. I think we had the bad luck of also having a new server for our large group- orders were dropped, food came out at different times and he brought us a tray of orange juice and coffee/tea to only come back and take it away since it was for another table even though some of us had already drank the beverages. We had a hard time waving down the staff as their eyes seemed to look every way but our table.

Have you tried the brunch at Carnegie's and was your experience the same or different than mine? Where is your favorite place for brunch in Taipei?
Posted by joanh at 10:45 AM

Email ThisBlogThis!Share to TwitterShare to FacebookShare to Pinterest
Labels: $$ depends on what you eat, area- Da An, breakfast/brunch, kid friendly, western

In the states they banger sausages but never could find cumberland sausages anywhere. Yes in English breakfasts they do serve or have baked beans with it.

I went there recently for their brunch as well, and found it disappointing. We probably went around the same time because we had a server who seemed new and did not what he was doing.

I had their Reuben sandwich which is only had a few slices of corn beef inside. After watching Man vs. Food, I had a much different image of what a Reuben is supposed to look like, so it was definitely disappointing.

I'll definitely skip this place and head over to the Diner for brunch from now on.

i agree, it's hard to get some attention!!!! usually had their lunch specials that were eh... i only go there when the diner is full!

howard: the other time i had English breakfast was in HK, so I'd seen baked beans with it before

eric: thanks for commenting and sharing your experience. sounds disappointing. it's definitely hard to eat here after watching Man vs. Food!! the pastrami sandwich at the Diner is not that exciting either.

baby madison: oh so it wasn't only that weekend. too bad.. i don't think i'd go there again even if the diner had a wait.. i'd go to the pho place! lol

They serve food at Carnegie's??? The only food I associate with that place is the guy selling sausages with raw garlic outside...perfect for making oneself appealing during the debauchery on Wednesday nights there.

I love Carnegie's! We had a very different experience. During my month's stay in Taipei we went once a week (though not for brunch) and had excellent food and drinks each time. My Dad said it was the best liver & onions he has ever had, and as a Brit brought up on the stuff that is a bold statement! The vegetable pie was also yummy, as were the nachos. The service was great (especially if you think of it more as a pub than a restaurant, which I suppose is where the frustration lies if you are there for brunch). It's a great place for non-Chinese speakers too, since the menu is bilingual and so are the staff.

I like Carnegies breakfasts but after a while they get sort of two dimensional. I now have either the curry or the chicken pie at Gies.

On Tap has some amazing weekend brunch items. The English breakfast is fresh and wonderful, as with the spinach eggs benedict and Croissant sandwiches with Brie. The service is spotty though, and the chili-cheese omelett is a no-go unless you like really spicy and salty eggs. I'd recommend a visit.