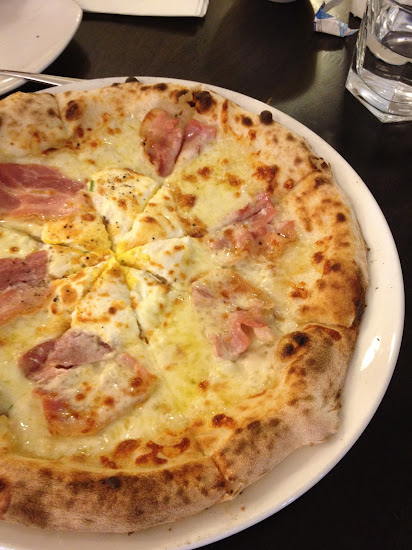 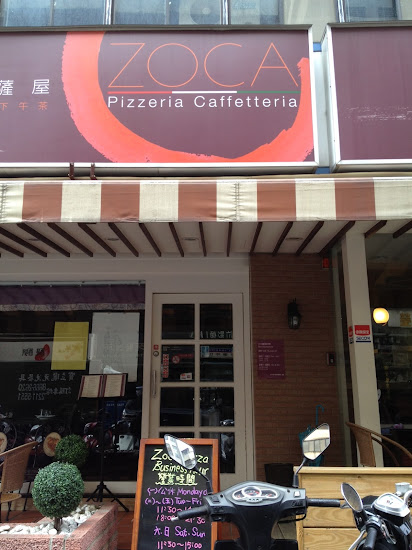 Has this ever happened to you? You secretly make some new year's resolutions to eat healthier, exercise more often, write snail mail to friends, watch Homeland, clean out your closet, as well as blog up a storm, but then real life hits and all of sudden it's already February. And all of the resolutions got postponed. Not to mention my laptop's "start up disk" is full so I have over a month's worth of travel and food photos from my iphone, s95 and DSLR to upload. Eek. Time to clear the digital clutter and reorganize.

But until then, let's talk about a great little pizza place in the Daan district I tried the other day, Zoca Pizza. Some of you might have discovered it already, as I've been told to try this place at least a few times by a few readers. (It is also across the street from the shuttered WeiB which I saw was being torn down.) 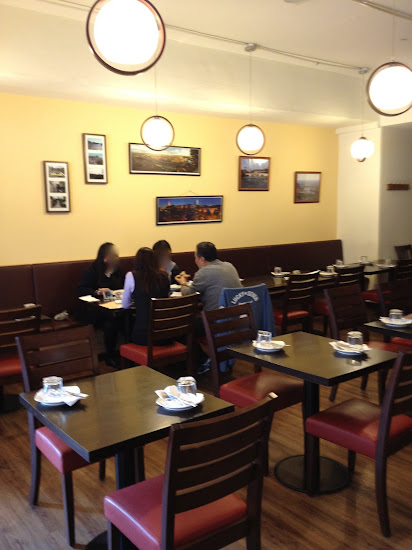 Opened over a year ago, Zoca Pizza is a casual little shop near Anhe Road, offering over 40 kinds of different thin crust pizzas on the English, Italian and Chinese menu, as well as a daily soup, a few salads, calzone, lasagna, and a pizza by the slice lunch set. There is also a wine list and house made limoncello. The variety of pizzas is quite overwhelming with all the choices, but luckily our friend helped us order. The pizzas also cook quickly and come quickly to the table, so you could always add a pizza after your initial order if you aren't full. I like to order different ones and share. 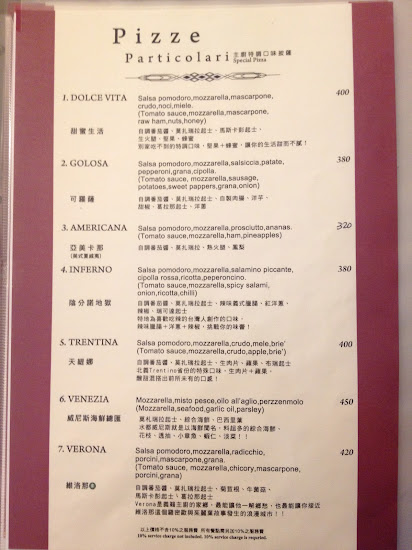 You can even spy the chef making the pizzas in the open kitchen and firing it in the brick oven. 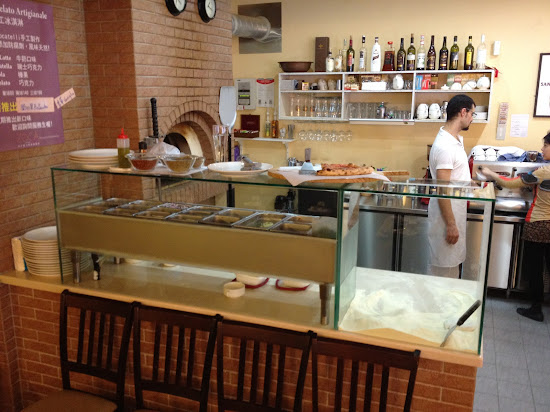 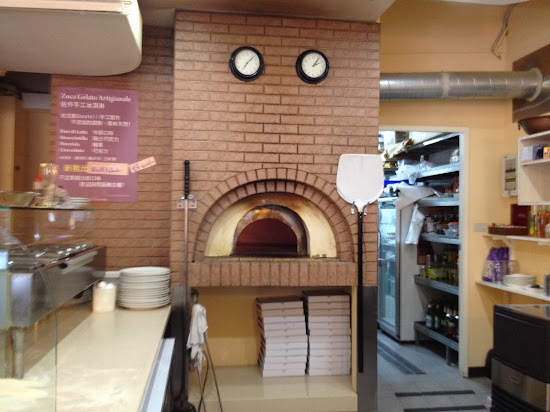 The waitress told us that the owner and chef of Zoca has been making pizza since he was a boy in Verona, Italy, and also learned how to make the Italian desserts and housemade gelatos that beckon when you walk in. 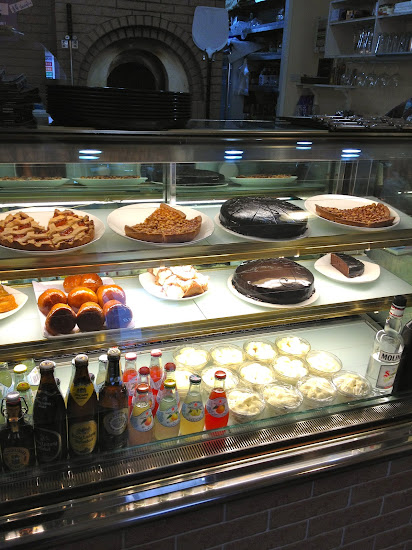 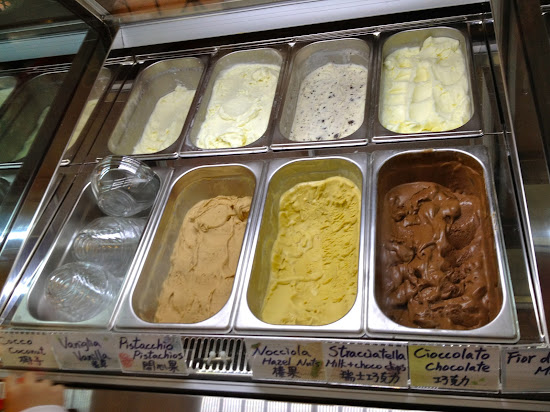 The pizzas are large enough to share, so my friends and I ordered a few to try. My friend recommended we come here insisted we order the Dolce Vita pizza (NT$400) and it ended up being my favorite of that day as well. 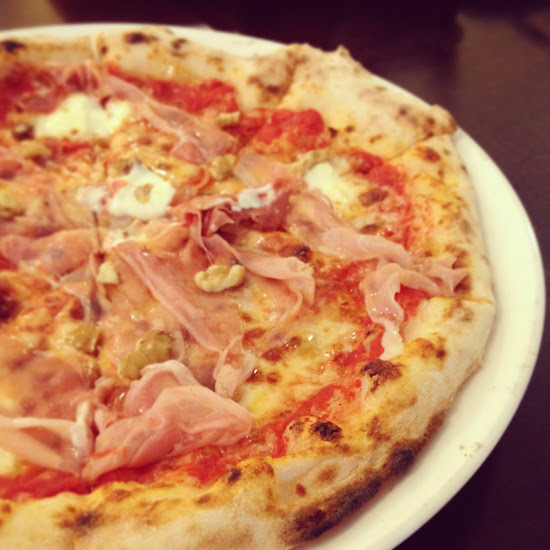 Topped with prosciutto, mascarpone cheese, nuts and honey provide contrasting flavors and textures with the tomato sauce and cheese base. When my friend first described the pizza to me, I thought it was a dessert pizza, but it is quite savory and the creaminess of the fresh mascarpone really perfects the pizza. And the chewy crust is thin, but bendable and gives a great bite- not heavy and not crispy. The neapolitan pizzas at Zoca are similar to Fifteen Pizza, for those of you that have been.

The carbonara pizza comes with a white sauce and topped with bacon and a well done baked egg. I missed the tartness of the tomato sauce with this one and prefer a less well done egg, but it might be good for fans of carbonara pasta. 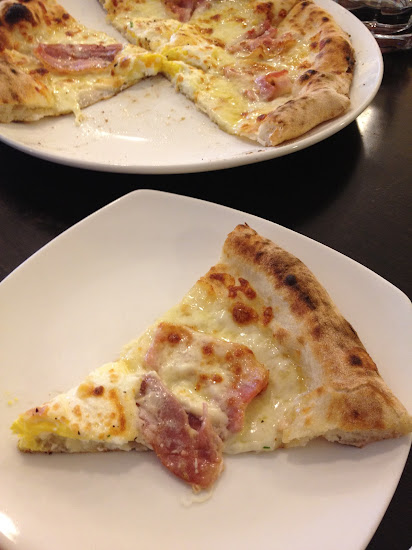 I thought it was funny (and very appropriate) that the pineapple and ham Hawaiian pizza was called Americana pizza (NT$320) instead. It reminded me of how we're so used to bastardized versions of other cuisines in America, but we end up craving it anyways because it's what we've grown up with. Like how some people look for or desire things like orange chicken and moo shu pork that are nearly impossible to find in Taipei because they are essentially Chinese Americana. 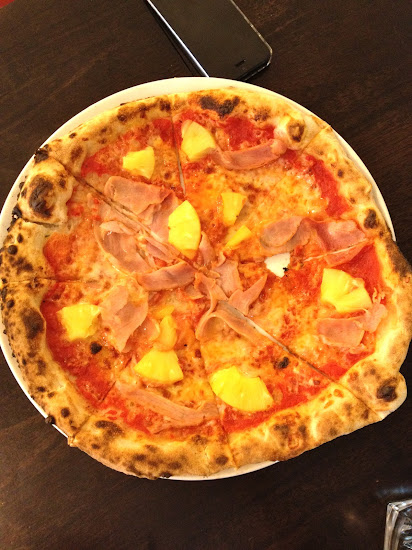 We couldn't leave without trying the desserts, so we shared a hazelnut tart, a cannoli, and limoncello cake which they called bobo. I thought the cake would have a strong lemon flavor, but it was more of a strong alcohol flavor, which was actually too strong for me. Haha, you can tell I'm not a big drinker. 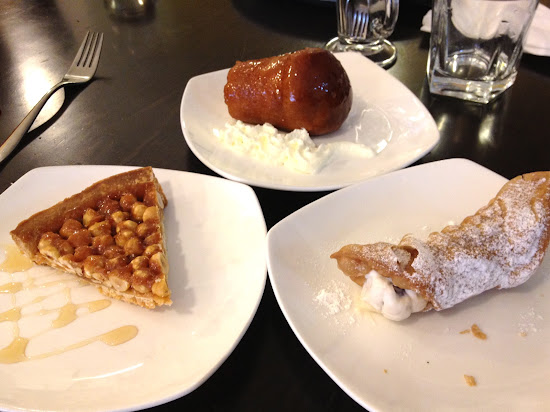 My favorite was the cannoli (NT$150), which I've only seen at Solo Pasta otherwise in Taipei. I'll have to come back another day to try a scoop or two of the Italian ice cream. 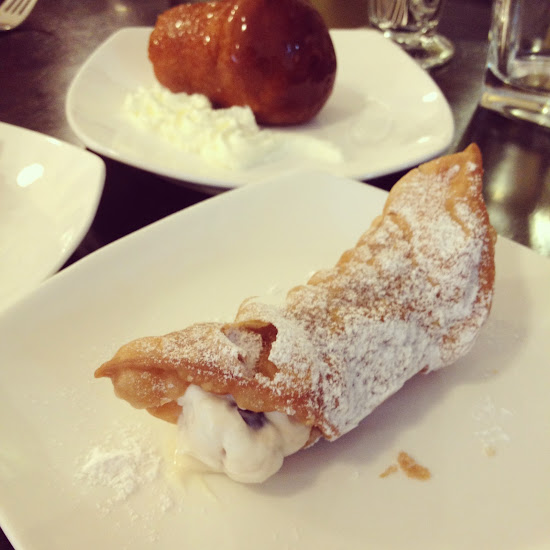 I will start of with something positive. I used to be quite fond of this restaurant for a few years, their pizza is damn tasty. Slightly above average for whats available in Taipei, and while their prices are high, it's nothing that will break your wallet.

Where the restaurant fails miserably is with their customer service. Unfortunately the seemingly "homey" feel given size and decor of the restaurant is not matched by the attitude of the owner, who is cold and unwelcoming, with absolutely no regard or appreciation for her customers.

On more than one occasion I had attempted to make a reservation only to be told that times were very restricted. Upon showing up the place would be more than half-empty and not even filled throughout the course of the meal. Its frustrating, but not enough to ruin my experience.

My most recent, and very last visit to the restaurant was for a birthday dinner I had organised with friends. A party of around 10 that ran up a bill of easily over $100 USD (if you convert). The owner herself made it a point to deny us the cake the friends had prepared for the celebration and instead with such an incredibly rude and apathetic attitude instead suggested that if we wished to celebrate with cake, we should purchase it from their restaurant. Her reasoning was a policy (set by her) that no "outside food" would be tolerated.

Never have I been to a restaurant in any city, of any caliber (whether 5-star or family owned), that would refuse a birthday party their birthday cake. Her attitude was unsympathetic, and dismissive. At the end of the night it left a horrible taste in everyones mouth.

Would I ever recommend someone spend their money there? Absolutely not. Good food or not, in the end I would never condone someone give their business to an establishment where the owner herself has zero respect or appreciation for her patronage.

Regarding the comment by Anonymous above, I encourage the poster to try bringing a cake into any well-run restaurant in the US. Generally it won't be permitted as most restaurants have a policy of not permitting the consumption of food within the restaurant purchased elsewhere. Furthermore, there are obvious legal liability issues (the restaurant is responsible if a patron sickens and dies after eating that cake) as well as probable violations of the terms of the approval issued by the health authority.

Seriously, Anonymous dude, go try this at any Cheesecake Factory restaurant in the US. You will be denied and told to buy one of their cakes -- which is just precisely what happened at Zocca Pizza.

I think the point was that the store owner could have made an effort to be more polite. These days it is not that hard to say please and no thank you. Even more so if someone is paying you upwards of USD100.

I've known the owners for a while and never saw them treat anyone rudely. Obviously it's not impossible that they could be, but I would be very surprised.

There's no allegation that the owners used abusive language or anything a reasonable person would consider rude. Indeed, the accusation of rudeness seems solely based on the fact the owners wouldn't permit third party cake purchased outside the premises to be served. All courtesy required was the simple statement, "I'm sorry, but we don't permit food purchased off premises to be eaten here. You are welcome to buy one of our cakes."

What's rude is the behavior of the complaining patrons. What they did is no different than walking into Zoca's Pizza restaurant with a pizza purchased at Dominos. These patrons had visited the restaurant before, and had to know that desserts including cakes were a house specialty.

I agree with Anonymous and can confirm that the service and staff there are extremely rude. As much as I like the Zoca Pizza, I found the customer service to be very lacking. When I tried to make a booking, the manager said since they were fully booked and that we could only sit outside. (I said that it would be fine) The manager then explained they will leave seats in the main restaurant for walk in customers - which is standard for most restaurants. When I suggested that we get the confirmed seats outside first and then ask to be seated inside if there is availability, the manager suddenly said nothing was available. Then she abruptly hung up! When I called back the call was transferred to voice mail. When a restaurant demonstrates rudeness and amateurish behavior like that you have no choice but to never patronize them. 朋友們這家餐廳太沒有禮貌了。完全不專業。不要浪費你的錢。

I find Paul's story difficult to believe. The restaurant is managed by Federico Zoca's wife, Yu Lin. Fede and his wife own the restaurant. They have a vested interest in not treating customers poorly, and indeed they do not. Period.

With that said, if for some reason Yulin was not managing the restaurant on a particular night, someone temporarily standing in for her might screw up.

Bill I know the reception is manned by Federico Zoca's wife, Yu Lin and I have been going to Zoca for past 2-3 years. While I'm not sure if she was the one that was rude that day -but that's the type of behavior which will make customers like myself never go back again. There are too many other choices in Taipei for decent pizza and much better service. 講道一半掛電話實在太不禮貌了。

I agree that the above reviewers that the customer service at this restaurant is terrible. Customers can't split checks, are not allowed to change seating, or let alone bring a bag of food/groceries that would inflame the owner to shout from behind the counters. This restaurant is run by the owners like a military compound. I use to like to bring friends and recommend it to families, but NEVER will I return after I saw the owners and staff treat a family with with young children so poorly because they had no reservations and would like to wait for a table indoors on a cold day.

I just love Zoca! Bee there three times and each time had an amazing pizza, delicious Italian ice-cream, and a lovely dinner with friends. The restaurant was packed with people and I met many Italians living in Taiwan who love coming here. The chef was nice and friendly and came to our table to see if everything was alright.

This days life is hard and stressful for everyone, but it is our own decision to take good things in life and appreciate them. And be positive.

If you are tired and stressed, expecting others to serve you and treat you like a prince or a princess, the only one to suffer is yourself. And don't demand from others what you don't know how to give.

Ordered pizza to go with extra pineapple, got home to find a tiny little pizza (I knew it would be small based on other reviews but daaamn), with a UNCUT pineapple ring in the middle and a soggy base that was undercooked and literally falling apart. At least I got to taste anchovies for the first time in ages,but all in all I was livid, would never recommend and certainly not give them a second chance.