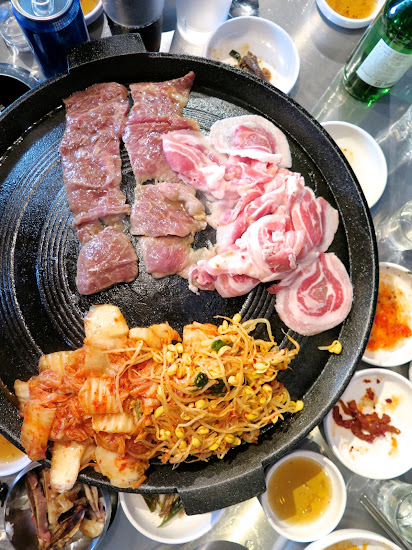 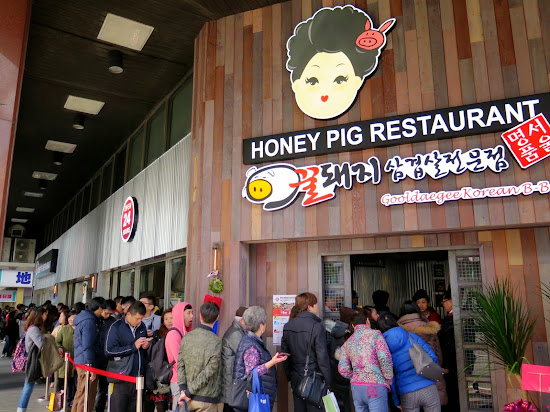 Taipei has apparently been starved for great Korean BBQ if these lines last week at the Honey Pig opening are any indication. FOUR TO SEVEN HOUR WAITS?! Is this craziness or what? You could fly to Korea for REAL KBBQ in that amount of time. A stream of people on Instagram's Honey Pig location tag declare how long they've waited like badges of honor. Would be diners bundled in coats and scarfs patiently wait outside in a single file line along the building, staring into the windows at diners already inside stuffing their face. At Honey Pig's entrance, a man dressed in a black suit and tie holds a clipboard like a bouncer at a club in K-town while K-pop videos and songs blast from the corner televisions. The servers drift from table to table with refills of kimchi, spicy bean sprouts, fried rice and raw meat to sizzle on the giant iron top grills.

Honey Pig probably expected some great buzz- with the can't-miss it prime location the corner of Xinyi and Keelung, the attention drawing giant sign with English and Korean, and the cartoon smile of big haired co-owner Miki, who was there in person helping serve up customers and posed for selfies- but they probably didn't expect to lines to continue until 3AM onwards, around their open 24 hours clock. 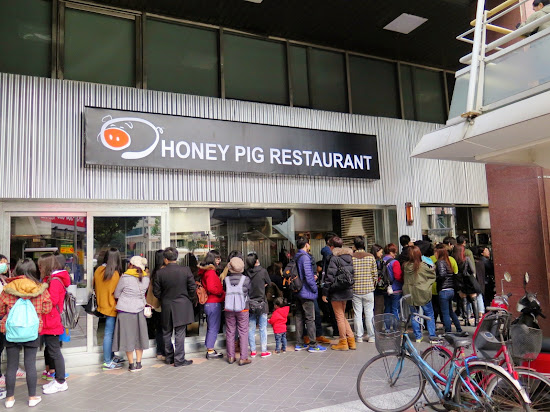 I've never heard of Honey Pig before last week, when I spotted the Honey Pig sign on Xinyi and whats app messages from my friends started buzzing my phone. The original Honey Pig restaurants are in the states- gained a loyal following at its east coast restaurants in Virginia and Maryland with a sister restaurant in LA- and somehow the first overseas Honey Pig is in Taipei.  Luckily I had a friend who had a friend who had a reservation and thankfully asked if I wanted to join last Friday. 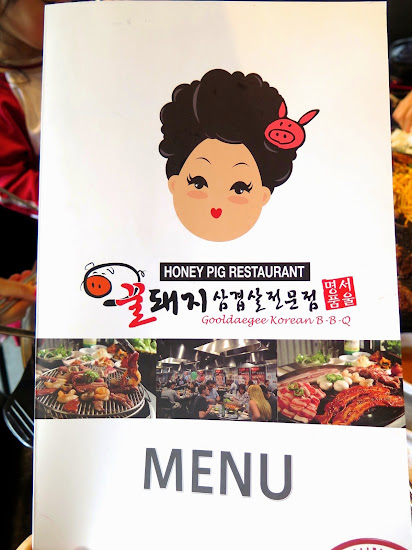 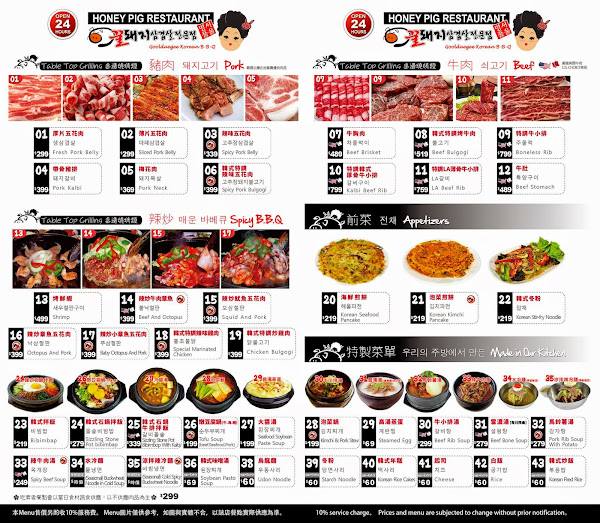 When I arrived, food and soju were already on the table and mountains of beef bulgogi and pork belly took turns blanketing the grill. As raw meat came to the table, our server would clear space by moving cooked meats to one corner and spreading out the meats which cooked fairly quickly.  Anything that took extra time like the seafood pancake or the cold noodles were not available yet, only the steamed egg and I think tofu stew.

For the pork belly, I preferred the thinly sliced as opposed to the fatty thicker slice and recommend opting for the addition of the spicy sauce. My favorites that I will order again when I return are the spicy pork belly, the shrimp (surprisingly sweet and cooked perfectly so they weren't too dry-although this of course depends on who's doing the cooking for you) and the bulgogi. There are three kinds of beef short rib- #9 boneless rib, #10 kalbi beef rib and #11 LA beef rib. 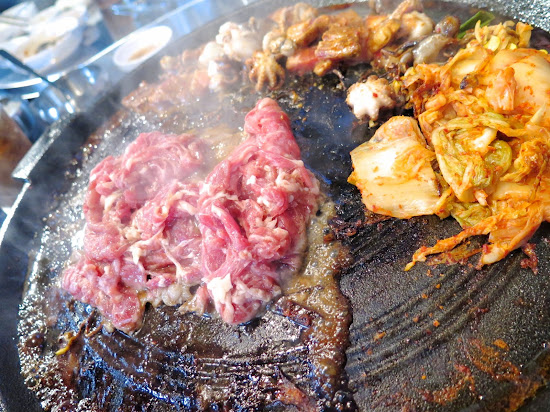 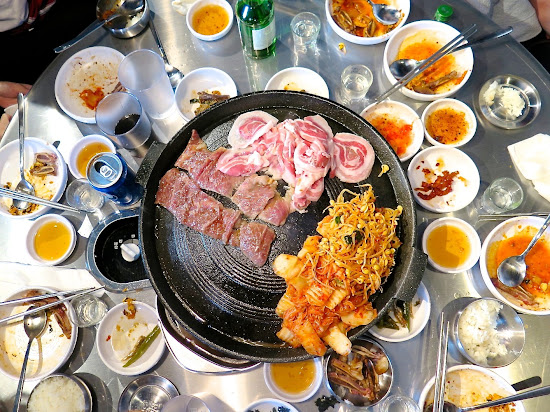 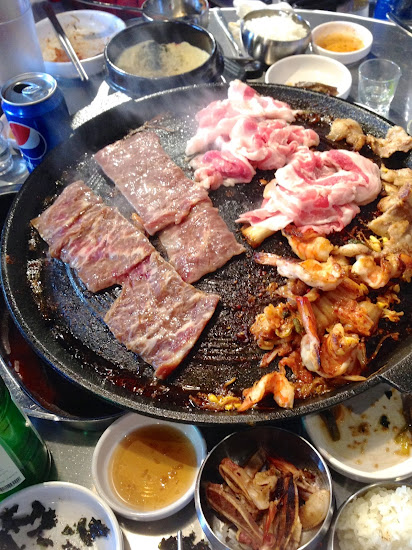 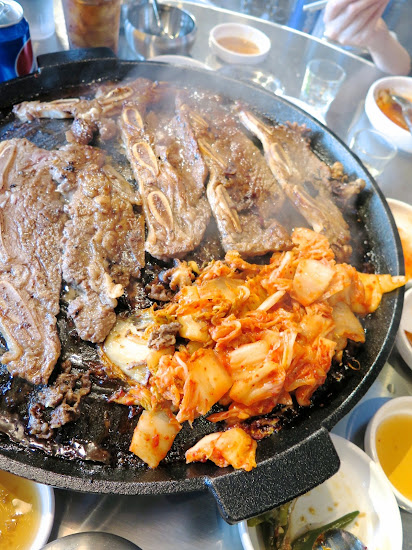 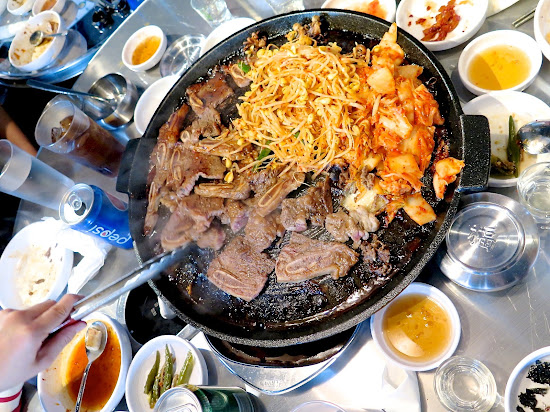 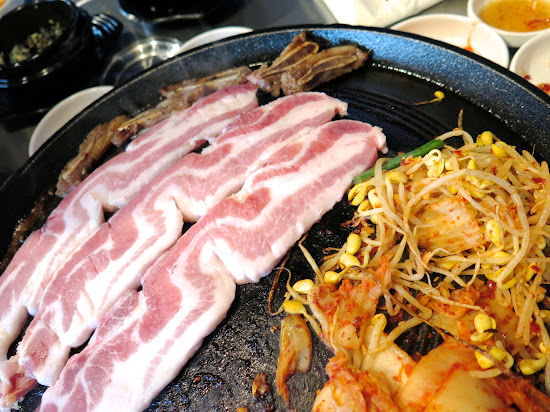 When we saw the table next to us with rice on their grill we waved down our server and asked for the same. Pretty soon, Miki came by each table with a huge bowl of kimchi rice and scooped some for each table's grill, topped with some seaweed shreds and mixed together. It was probably faster than their usual way of doing it from scratch with a bowl of white rice, but it was faster and everyone just wanted to try it. Didn't quite get any crispy rice bits from the kimchi fried rice being grilled, but it was tasty. 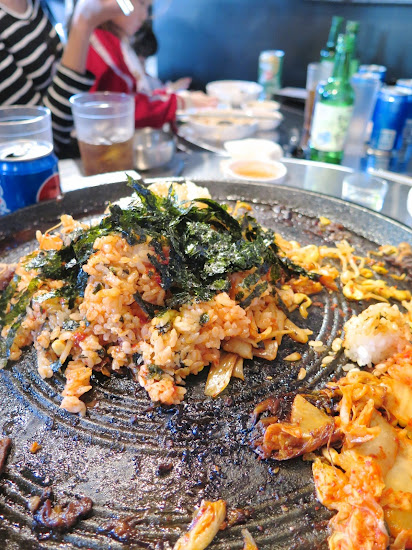 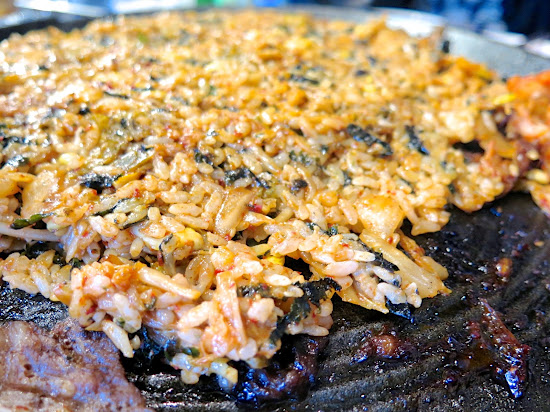 Hopefully as the craziness settles down, it would be great to see things like fresh lettuce and thin slices of radishes or rice noodles to wrap the meat in, or meats like beef tongue that they have on their US menus to try out here. And hopefully the service and portions remains the same after the training period is over and the US owners return to the states. Honey Pig is definitely worth trying out, but no restaurant is worth waiting in line for three plus hours when then there's so much to eat in Taipei, much less other Korean restaurants! Avoid the lines and make reservations- you might not be able to eat it until a few weeks later, but at least you won't have to have the stress and hunger pangs of waiting in line!
Posted by joanh at 7:08 PM

Wow! I know Taiwanese people love to queue but this is a bit out of control.

Funnily enough, there's actually a Honey Pig in Irvine and while I've been to the K-Town location a few times, I've not been to the Irvine one yet (despite living less than 5 minutes away).

Maybe this will motivate me to go check it out...

Do you have any idea of what happened to the Tavern? The Tavern was the pub/restaurant at that location for many years.

This place is way overrated. The food isn't good and the service sucks. It's 100% hype.

Taiwanese love to queue is all...
(Well they did offer free beer during the first few opening days)

Service is more of a miss than a hit; one smells like BBQ afterwards; oh don't wear a white shirt :) Pork is tasty (kinda "taiwanesed" korean, but in a good way. Pricy in comparison. Good to get lunch takeout.

Tavern closed cuz the rent increased, there have be couple of places going in n out there.

Honey Pig is a super overrated restaurant. Lined up with my wife for 1 hour even when there was so many empty tables available. Once seated the staff was too busy to care about us. It took 20 minutes before they came to take our order. Menu variety was limited. Lots of meats but nothing more. Super over priced for what you get. Popularity of this restaurant is just a fad. Way better choices elsewhere.

I agree with above comment. Taiwanese loves to queue for everything. After few days or weeks or months, no one will be in the restaurant. Honey pig is brand sake, nothing else is inside the restaurant, everything is pricey. Don't waste your time...

Honey pig is my #1 favorite Korean BBQ when I used to live in the States! So excited it is now opened in Taipei! But 4-7 hours of wait time? No way Jose...