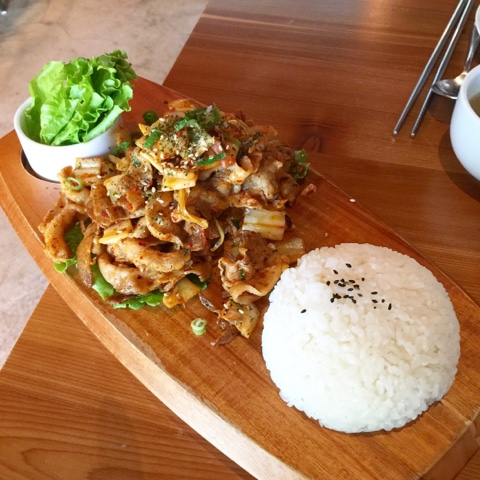 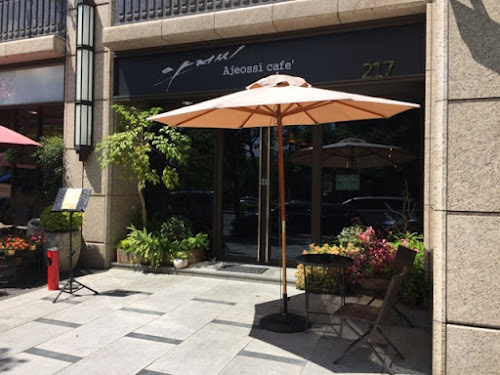 Ajeossi is a casual homestyle Korean cafe in Neihu, opened by Koreans owners in February 2015. Next door there was a ramen shop that had a line of 20 or so people waiting. At first, we thought the line was for Ajeossi, but alas it was not. Can different kinds of Korean food work in Taipei (besides the popular soondubu, kbbq and spicy rice cake hotpot)? 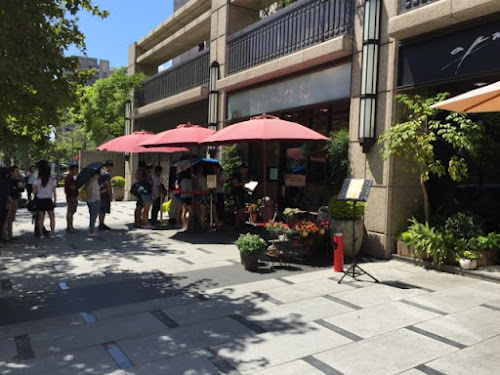 The atmosphere is like a coffee shop with warm wood walls and tables, with a projection screen playing Korean soaps over the bar/counter. A huge teddy bear keeps watch from the corner and two clocks hang on the wall, one with Taipei time and the other for Korea. 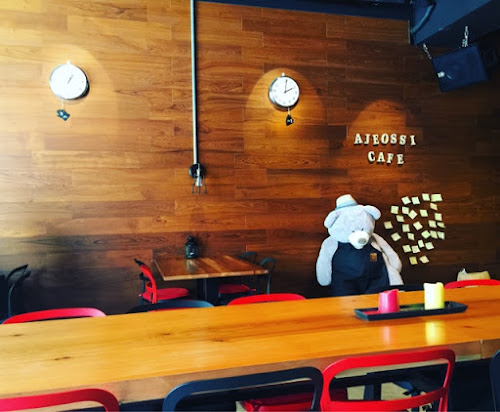 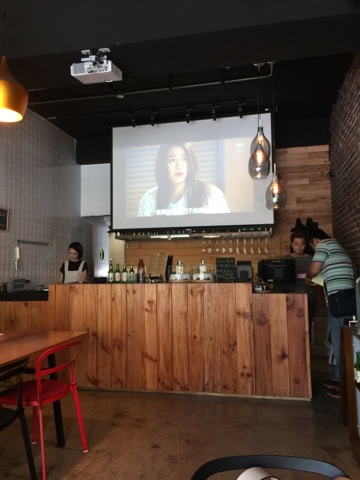 The menu has only ten or so dishes, with the focus being on drinks- O'Sulloc Korean tea, milk teas, coffee, tea, vinegar soda and a few cocktails. They also had desserts on their menu, but 2 out of 3 were crossed out. I could make out most of the dishes in Chinese, but luckily my friends read Korean, so they picked what to order. The first few are mostly rice and pork dishes (Soy sauce rice,  kimchi pork belly or spicy pork belly or kimchi fried rice with optional cheese),  the next three are Korean rice cake and the last is the cold noodles. 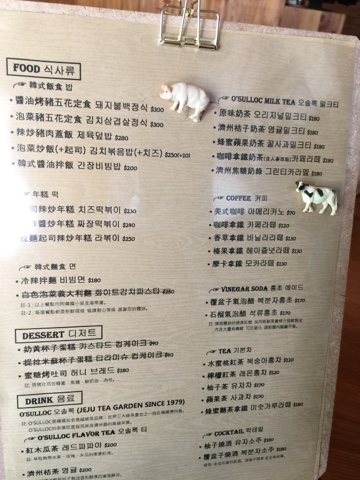 We decided to get the Korean style soy sauce rice (NT$200),  kimchi pork belly with white rice (NT$200), cold ramen noodles with chogochujang (NT$180), and Korean rice cakes dubokki w spicy zhajiang sauce (NT$240). There's no English on the menus, so these are my translations! You can see the banchan is very simple- kimchi, seaweed and some pickles/cucumbers. 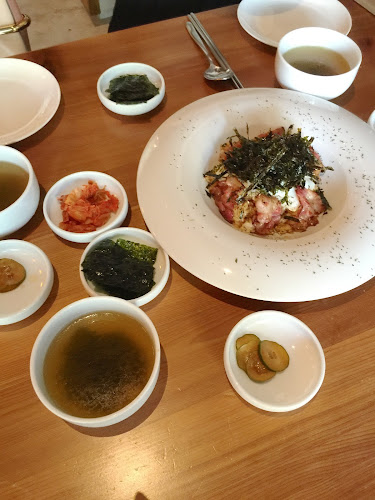 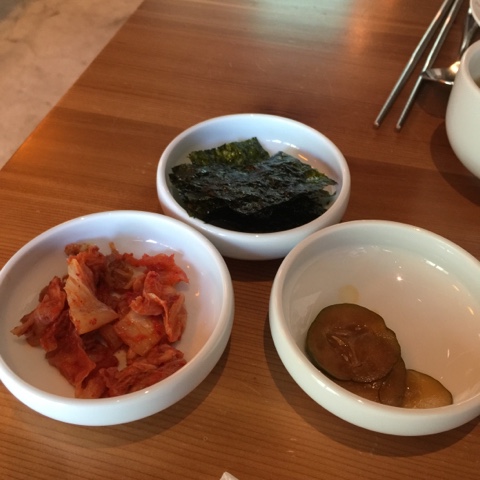 The first dish is something you could make at home, and something owners said that it's the kind of dish they make when there's nothing to eat at home. The Korean style soy sauce rice (NT$200) is rice mixed with soy sauce, fried egg and bacon and a pile of seaweed strips atop. There's no bimbimbap here, at least not the kind with all the julienned veggies that need a lot of prepping. I liked this, but if I made it myself I wouldn't mix soy sauce into the rice. 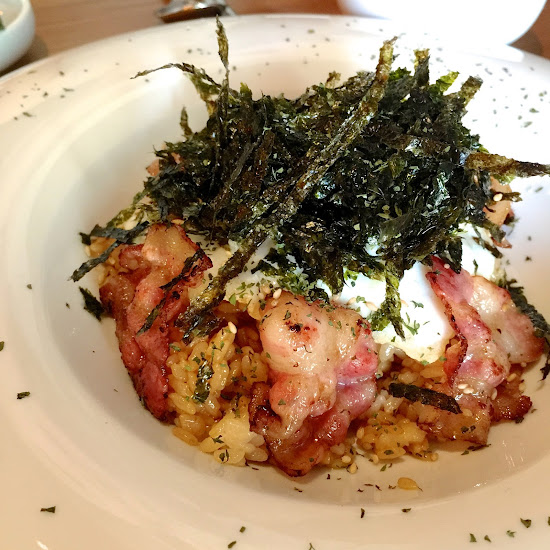 The cold noodles (NT$180) was probably my favorite dish, though it wasn't the usual soupy naengmyeon. After quizzing my friend, she guessed that they used cho-gojuchang for the noodles. I knew about gochujang, Korean red pepper chili paste aka Korean sriracha, but I hadn't heard of chogojuchang which was more vinegary and spicy. Will have to find some #chogochujang sauce so I can try making this at home and experiment with both!! 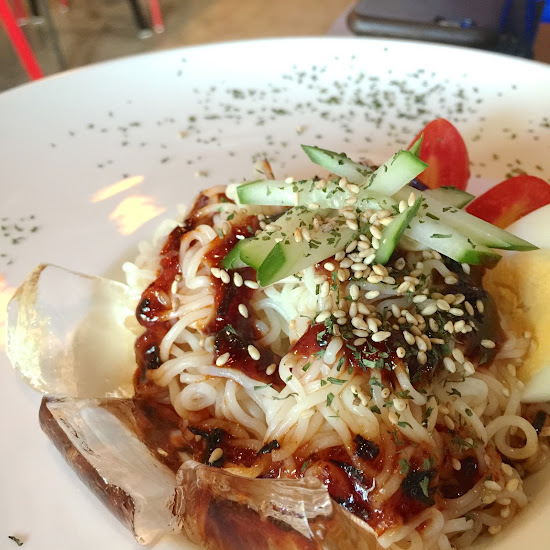 Again this is something you could probably make at home with the right condiment, since the cucumber, tomato and half boiled egg were more homestyle than precise. 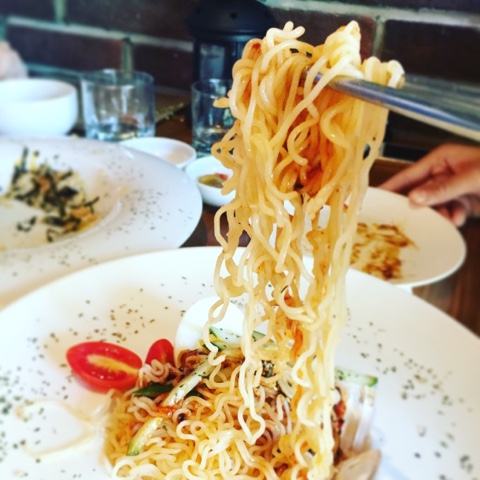 Korean rice cakes dubokki w spicy zhajiang sauce (NT$240) Korean zhajiang sauce is thicker and sweeter than Chinese zhajiang mian sauce and this dish also had a spicy kick. I liked this and it's very different than what you'd usually find around town. If we didn't get this, then I would have tried the ramen cheese spicy rice cake. 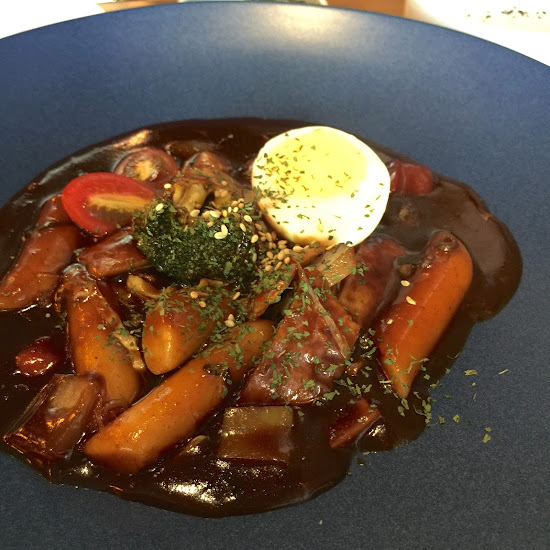 Kimchi pork belly with mini lettuce and white rice (NT$300)- Pork was a tad dry, but I still thought it was decent. It was better than a lot of the dishes that I've tried around town (I had some of the worst stringy bulgogi at usually good Dubu House last year) 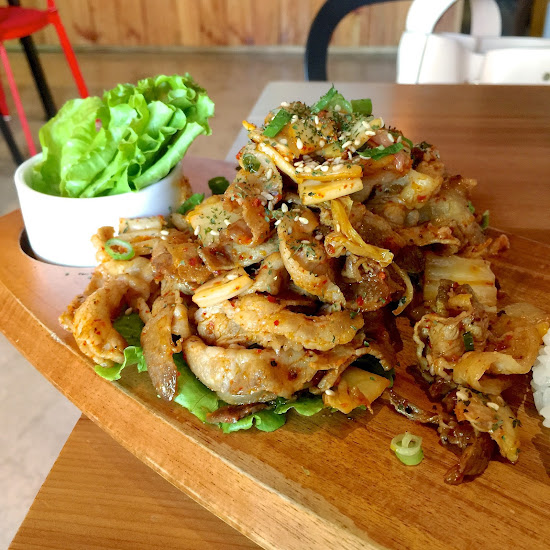 Ajeossi's random location makes it so that you really have to seek it out if you didn't live in the neighborhood. It seems like a mostly residential neighborhood, so not an area I'd normally pass by. But I'm glad I got to try it and that it's offering a different type of Korean fare in Taipei. At the very least, if you're having Korean soap withdrawals, you know now where to go.
Posted by joanh at 2:30 PM

I did like your recipe, it was almost perfect! I think it may have needed a bit of sugar. Overall it was ok and yes fluffy so awesome job on that. If I were to add sugar how much would you recommend? Thanks so much!

It looks great. Probably one day I will visit there :)
Thanks for a good information.