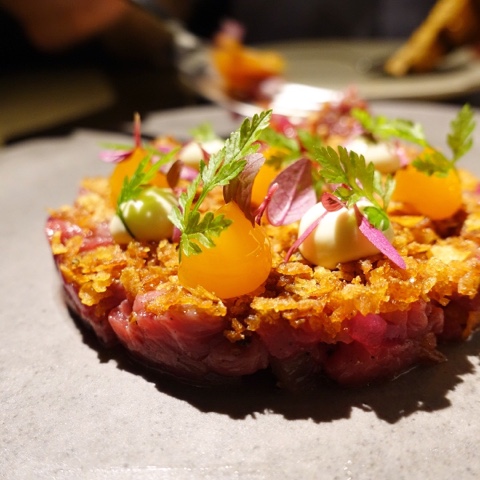 kid friendliness: can't say that i've ever seen kids eat here. maybe if your kid is a gourmet baby and you get an early reservation. 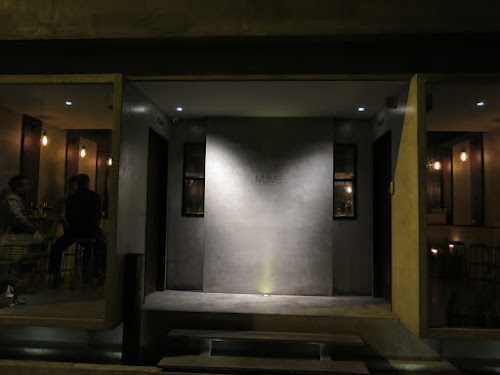 SINCE MUME HAS OPENED ITS DOORS IN 2014, I've learned more about New Nordic cuisine and Noma*-- both things that influence Mume, and so I think I've come to understand Mume a little better. Watching Noma's Chef Rene Redzepi's fervor and dedication to creating a sense of "time and place" on the plate helps explain what New Nordic cuisine is- using ingredients that are in season, local while combining old techniques like smoking and curing with the new. The first time I ate at Mume, I don't think I had ever eaten anything like it before- it wasn't French, it wasn't fine dining, it wasn't completely gastronomy,  it wasn't Taiwanese, but used some Taiwanese ingredients- but I knew I wanted more. Since my first meal there, I've been a number of times, each time admiring the creativity by the chefs at Mume, but also the taste- loving the unexpected flavor combinations, beautiful presentation and when I got it, the stories behind the ingredients or the dishes. For me, dining at Mume is an adventure- it made me think about the food, it made me ask questions, it made me remember what I ate a few days later. I don't think Mume is for everyone- I've heard negative reviews from friends of friends even before I visited, but if the photos and menu intrigues you then you should definitely give it a try.  *(Thanks in part to Netflix's Chef's Table and the Noma documentary, My Perfect Storm, both recommended watching to those obsessed with food) 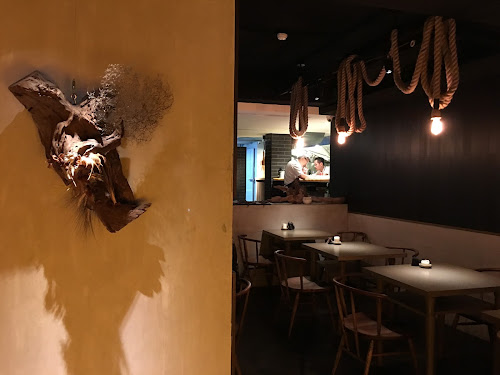 Mume's menu is in English only and is divided into Snacks, Smaller, Bigger and Sweets. Dishes range from NT$300-900, so I think it's priced quite reasonably for the portions, especially when I think about similar modern restaurants and menus in LA, HK or even pop ups that come to Taipei. For your first time, I recommend coming to Mume for their regular menu, not a special set menu or guest chef pop up, which will be more expensive (usually in NT$2800+ range) and has smaller tasting menu portions. Personally, I think the best way to enjoy Mume is to go with two to four people and share as much as you can on the menu. If you don't have the budget to try everything, then opt for a majority of "Smaller" plates rather than ordering a "Bigger" main dish per person. The "Smaller" plates are more unique and much less expensive and you'll get to try more things to know what to reorder for the next visit. Since I can eat, I've tried most of Mume's menu over the past few years, so I was excited to try the latest dishes that Mume was offering for the summer.

This is Mume's menu as of summer 2016. The menu has evolved quite a bit since they opened, which at first was set menu only. I want to write another post featuring dishes on older menu vs current menu, but this post will spotlight almost all the dishes on the SMALLER section of the menu, since I ordered all but one on my last visit. 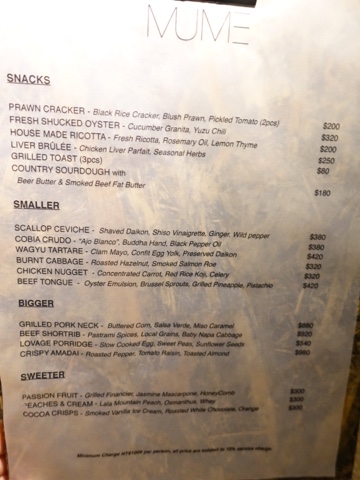 My cocktail of the evening- Pomme Pomme, yummy Apple cocktail 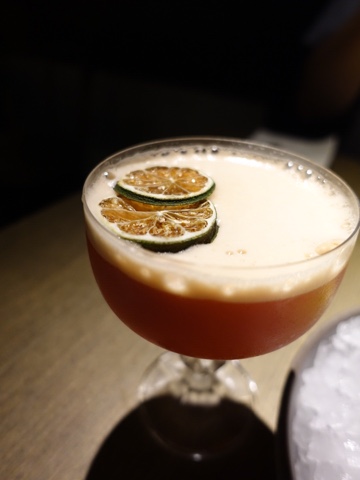 Gorgeousness and deliciousness. Are those real words? I don't care. 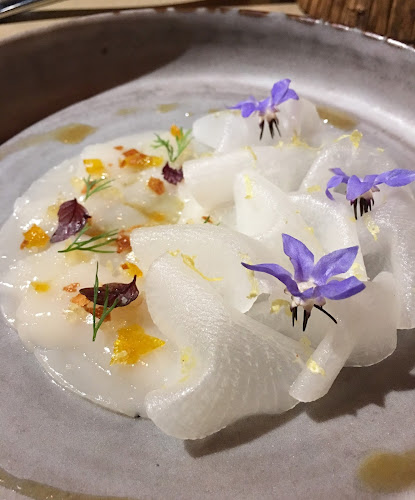 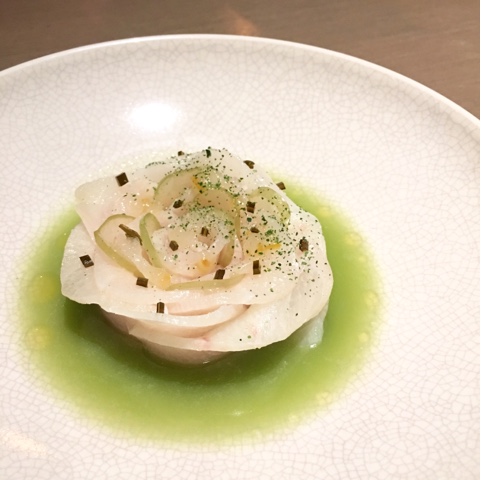 We take turns dipping each "petal" of cobia sashimi into the sauce, (made of cucumber juice and chinese almonds according to @little_meg_siu_meg, and inspired by Spanish ajo blanco soup), before eating it. Would have never thought to pair raw fish with thinly sliced grapes, but Google also says grapes are usually an ingredient in ajo blanco, and it unexpectedly works well all together. 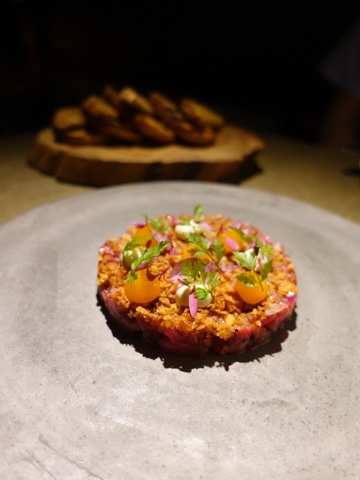 One of my favorite dishes of Mume's menu is the waygu beef tartare with grilled toast. It was my first time trying beef tartare or any kind of raw beef so it surprised me how much I liked it. Mixed with the clam mayo, confit egg yolk and Taiwanese pickled daikon, it did taste just like steak with the texture of sashimi which paired perfectly with the buttery crispy thin toast slices. The only complaint I have is that there used to be toast included with the dish, and now it's separate because many people didn't eat the toast. Ideally, Mume could ask if people want it so they can opt out rather than take it away from the dish. 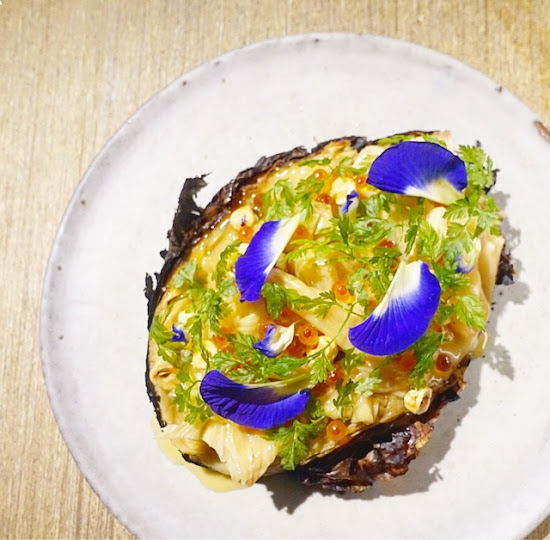 Burnt cabbage never looked so pretty. The cabbage's texture is nearly melt in your mouth- like the silkiness of cabbage that's been cooked in hotpot for a long time- except the flavor is caramelized instead of lost, and each bite is peppered with bursts of salty salmon roe and crunchy hazelnuts. Love the pop of color from the bright blue peaflower. 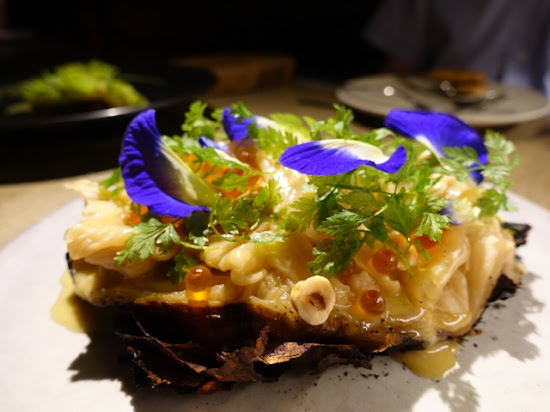 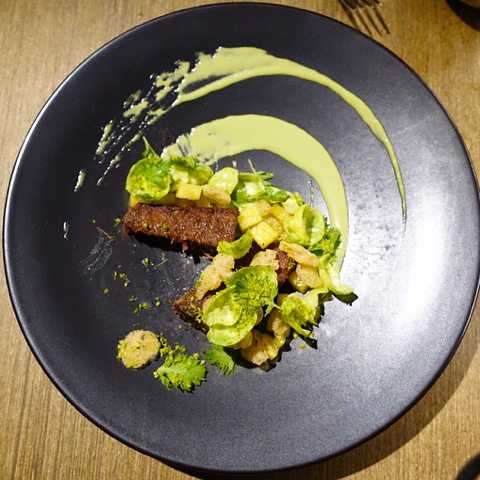 Love love love the new dish -super tender tongue brightened up by the sweetness of the pineapple, green of the brussels sprouts and crunch of the puffed rice. If you've never had tongue before, don't let it scare you, it's so good.

(Coincidentally, beef tongue is also on RAW's summer 2016 menu and their rendition of the beef tongue cracker is one of my favorite bites ever from RAW. ) 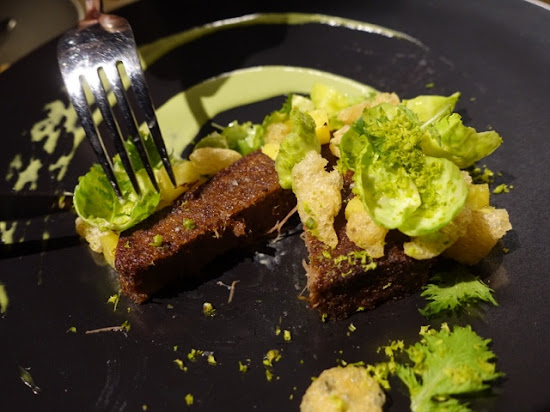 This dish isn't on the menu yet, but luckily I got a sneak peek. I LOVED the intensity of the shrimp brains and the sweetness of the shrimp combined w the crunchy curls of yam bean and icy cold ricotta melting in your mouth. We used the bread to wipe up the remaining sauce on the plate. This dish is made for people (like me) who like to suck the brains out of the shrimp, but without getting your hands dirty. This dish was freaking AMAZING. Please put it on the menu ASAP @richie_lin. 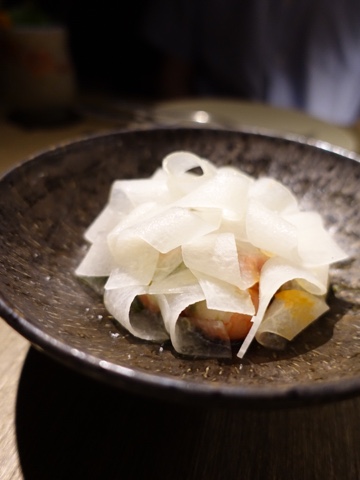 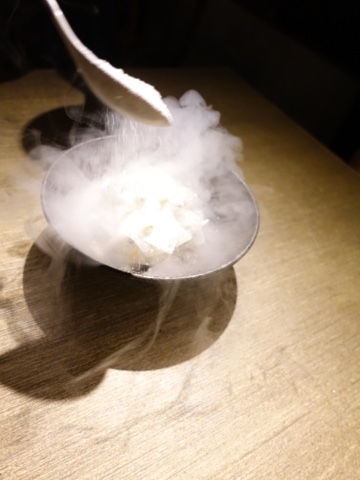 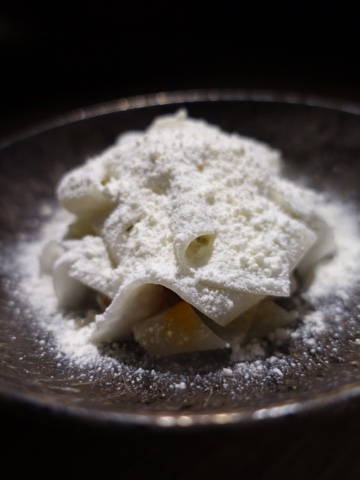 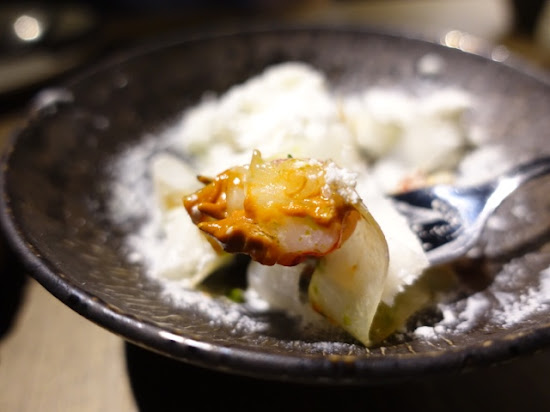 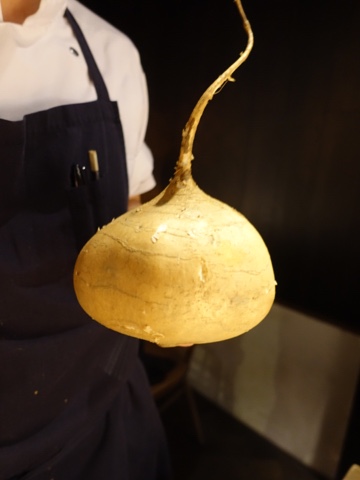 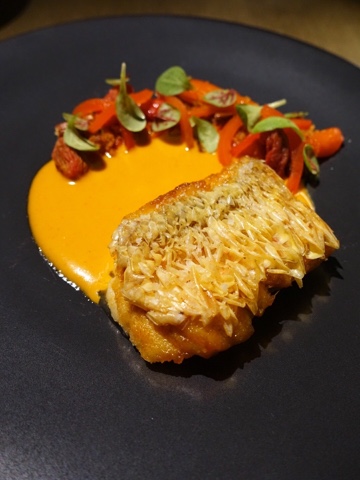 Crispy amadai isn't new on the modern european scene in Taipei-- had it at at least 4 other restaurants in Taipei (Robuchon was my first, then Ducky, C'est La Vie and at a sushi bar) with the slicked up rows of crunchy scales- but paired with my love for sweet roasted red pepper, I devoured this dish despite being full already. The buttery red pepper sauce, toasted almonds, crispy Taiwanese bacon bits and subtle touch of spice complimented the velvety flesh of the amadai. 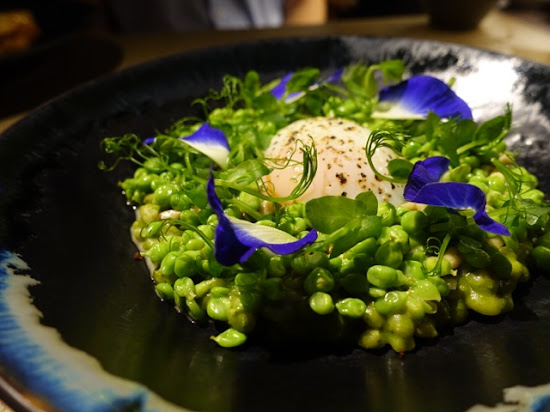 Another new summer menu item with a new approach for their porridge. Lovage instead of mushroom for the porridge, the slow cooked egg in a bed of sweet peas makes it feel like springtime. Chef Kai said they wanted to make it like risotto without Parmesan cheese, so they used a dehydrated fermented tofu. Feels more like a spring dish than summer, but I still enjoyed it. It's less heavy than the mushroom porridge. 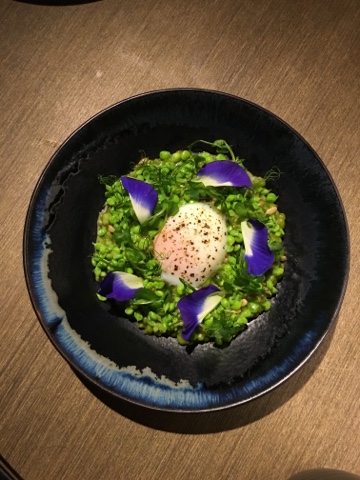 Dense chocolate mousse hides underneath a roof of sugar and chocolate tiles- the way that each pieces melted on our tongue is a fun sensation. 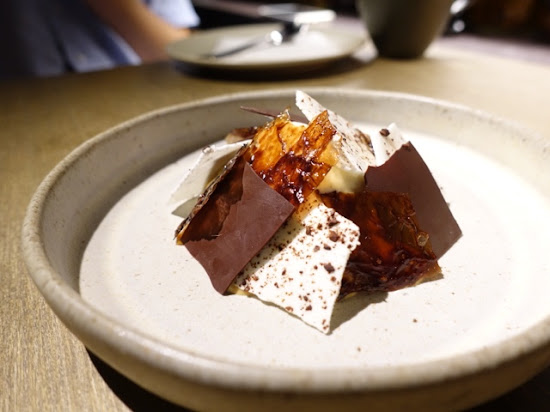 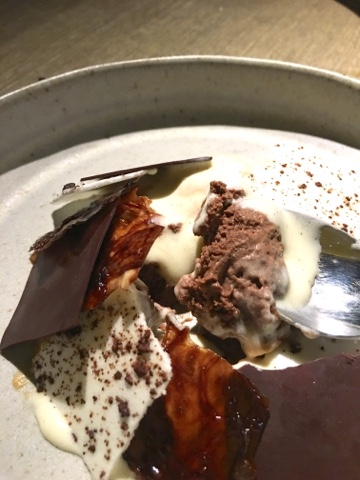 If I had to pick one dessert from Mume's menu as my favorite, I would pick this one. Bite sized pieces of icy Taiwanese peach hiding underneath a layer of snowy cream. Almost like an upscale modern version of the popular Taiwanese snowflake shaved ice. 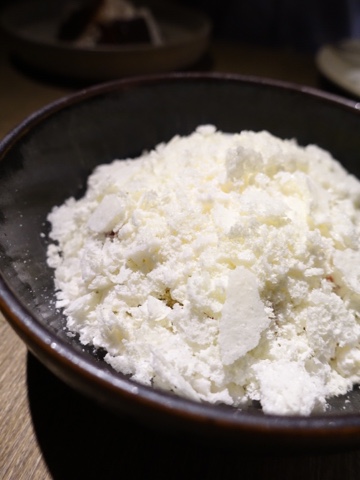 Busy busy kitchen with Chefs Kai Ward and Richie Lin plating up for a full house. Advance reservations recommended for Mume. If you have a larger party, you'll get seated in the room downstairs with a mandatory set menu, but I prefer to order off their menu a la carte for the best experience. Mume will do a collaboration/pop up with chef Zaiyu Hasegawa from Den, winner of the One to Watch award, later this month-- it's too bad I won't be in Taipei to check it out. 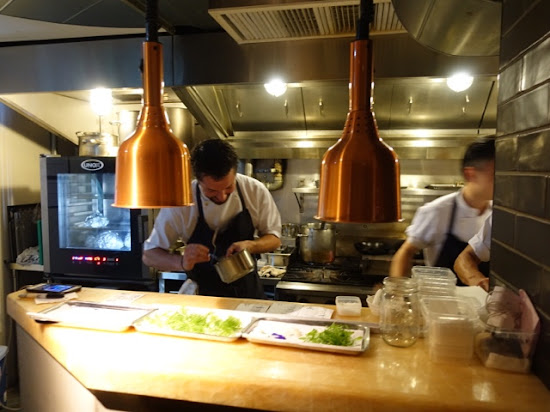 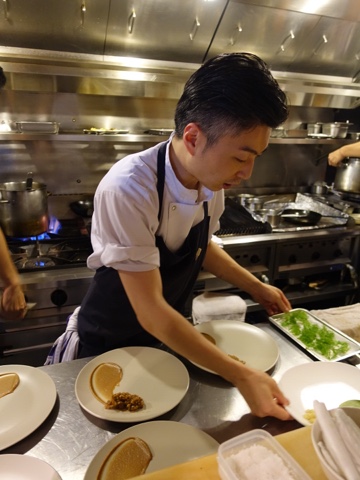 Great Blog!! That was amazing. your blog is really eye catching and beautiful. thanks for sharing...vegan desserts sanfrancisco