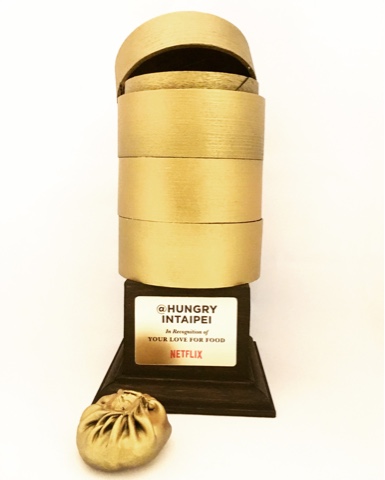 MY BLOG TURNS ELEVEN TODAY. Keeping my blog alive all these years has been like raising a child-- I've spent many sleepless nights trying to put it to bed, I've run out of memory on my phone with the countless photos, I've spent more money than I've expected, I'm proud of its growth and I've learned so much from the process, about myself and the world.
So it's fitting that this year I got my first trophy award for the blog. I've gotten voted best blog in Taipei over the years, but this was the first time holding something tangible and golden and engraved with my name!! And a golden xiao long bao, no less!!
Thanks Netflix, Netfli Asia and Netflix Taiwan for recognizing my love for food. I do love it! I'm OBSESSED!
When I first got an email from @netflixasia, I wondered, what did they want to help promote their new season of Chef's Table? No commitment, just some goodies for you, they said. Sure, why not, I thought. I was a long time fan of @chefstablenetflix and an even longer fan of @Netflix. When they first launched, I would eagerly organize my DVD queue and await the thin, flat red DVD envelopes in the mail, rip them open like Christmas presents even though I already knew what was inside. I was always amazed that once I sent off the dvd, there another one would promptly arrive a few days later. Then they started to stream movies, then had must binge watch TV House of Cards and Orange is the New Black, both of which I binged.
And for years, I said, when is someone going to do a @Netflix for Asia? And they finally did it themselves- @Netflixtw, @Netflixasia, @netflixhg.. And through a creative marketing campaign, a group of people across Asia are getting recognized for their passion, vision & love of food with individualized golden trophies, but also connecting with each other through photos and #mychefstable. When my photos made the top 9 of #mychefstable, I browsed and admired and drooled over the passion of so many other people posting gorgeous photos of foods, foreign and familiar.
I feel that same way watching @Gaggan talk about his failed restaurants and journey before executing his vision after an internship at El Bulli to share Indian food in such a striking way, or chef @grant_achatz talk about his obstacles before @alinearestaurant or watching an episode from Season 1 about @nnakarestaurant's chef Nakayama, which launched her modern kaiseki restaurant in LA into even more recognition. It's inspiring knowing that chefs of the world's best restaurants succeeded because they persisted, even when had doubts.
I doubt I'll be the lucky one to travel the world to dine and photograph all the restaurants in season 2, as AMAZING as that would be, but I'll have this xiao long bao trophy to remind me to keep working on #hungryintaipei to share the stories behind the food in #Taipei #🇹🇼 even when I have doubts.
It's hard to keep writing sometimes when I used to get more feedback and comments and know who was "out there" reading, and now it's old fashioned to be blogging, much less commenting on blogs. Now it's quicker and more interactive to be on Instagram, Facebook, Snapchat, and it's hard to not get caught up in the "likes" game- why do my photos not get as many likes as the next account or whatnot. I do get a lot of kind emails and comments from readers and I want you to know that's what keeps me posting and writing and sharing! I'm happy Taipei has been getting lots of love around the world, and I know I've played a small part in that by creating a resource for people visiting and living here. I still have lots of ideas and goals for hungryintaipei- just need more hours in the day! As always, thanks for being hungry in taipei with me! Congratulations for the award. I'm one of the silent many who visit the site often yet post on your comments. Thank you for the insight into the Taipei food scene and I hope to read more of your amazing articles in the coming years.

Sincerest congrats to you.

Wow, that is incredible! I just hit 4 years on my blog. Congrats on 11 years!

Congrats on the milestone and the award! :) And thanks for sharing the passion and amazing finds all these years!

I love your blog and it was one of my main reasons that I visited Taiwan for the first time some three years ago. I've now been back two more times and planning my fourth trip for July.

Keep up the good work!

Congratulations!! I am absolutely thrilled for this super well-earned and deserved trophy that you have received. With how fast and changing technology is impacting all bloggers, I can only imagine how difficult it might be. BUT PLEASE STAY STRONG!! I love your blog and nearly ate my heart out(and my summer shorts! ahaha) through your blog. Last summer, I had a checklist on my phone with recommendations from this blog and went around Taipei guided by your blog. I am proud to say all destinations were checked! Thanks to you, I explored and discovered so much; people I asked around were always surprised at how I was in the know for all these nice restaurants and stops. Reading your entries, I laughed and smiled at how much I could relate to (although I terribly wish I could travel to Taiwan as much as you do). Please please please continue what you do. Although the little things like numbers might not show it, but know that you make meaningful and significant impacts on the lucky ones blessed enough to stumble upon your beautiful blog!

Congratulations! So very well deserved! I've never commented but am I regular visitor and truly appreciate your unique insights to help me enjoy all the tasty food that Taipei has to offer. Keep up the good work!!

An enormous congratulations! Your blog is amazing and inspiring, making my belly and mind happy with thoughts and visions of delicious food. About 1 month ago, I noticed you mentioned in Lonely Planet Taiwan (wow!) and am excited to be trying some of your recommendations from your blog on my trip to Taipei.

Please don't stop blogging. Although the new forms of social media you mentioned may be more relevant they are popular with a younger generation and "oldies" like me still do things the old fashioned way. Your blog has allowed me, an expat, to experience the best of Taipei and I turn to it often to find look for places to try. Congratulations on your long deserved award!

CONGRATS, JOAN! :) I'm so glad I found your blog as I was researching places to check out during my trip. I'm glad you are one of those bloggers that take time to respond to emails, so thank you! Stay awesome!

Congrats on the award and your longevity! Glad to see you are getting some recognition. Your blog has been an important resource for when since I arrived in Taipei 6 years ago, broke and knowing no one. Now I am married with kids, and when we are looking for anything food related in Taipei we always turn to you first. Sorry that I don't take more time to comment and recognize your efforts, will try to do better in that regard. Please continue to do what you do exactly how you do it!

i LOVE your blog and wanted to say thank you for all your hard work! i would starve in taiwan without you. i dont know you but i love you keep up the great stuff x

And I need to be better at responding to comments! Thank you everyone for taking the time to leave some love for me.

Anonymous- thanks for leaving a comment on a special occasion! glad to hear from you!

Tim- thank you so much!

The Offalo - thanks so much! 4 years is an achievement too! keep it going!

One More Bite- thanks so much!

Philipp- thank you! I'm always happy to hear that my blog factored into people deciding to visit Taiwan! Hope you have more and more amazing visits!

Tiffany- aww thank you so much! I'm so happy that the blog helped you make a checklist and that you made it to all the places on your list! Having traveled to new places the past few years, I know that it's not easy to figure out what's worth packing into your short trip. I'm going to try to put together some more lists! thanks for taking the time to leave such a great comment!

Anonymous- thank you for taking the time to leave comment and stop by to read the blog!

Jules @ Lovely Las Vegas- thank you thank you! hope you had a great visit!

Anonymous- thanks for the encouragement.. it's definitely a challenge seeing all the newbies get more likes and followers on instagram, but of course, those posts don't turn up in google searches. i'll keep blogging as long as i can!

Christine- thank you so much! haha, yes I do try to respond to emails! :) hope you had a great trip!

Anonymous- thank you! wow, i'm so happy to hear that you've settled into Taipei and it helped you find your way around. thanks for sharing your story and encouragement .

Leslie - awww. your comment made me smile. thank you!