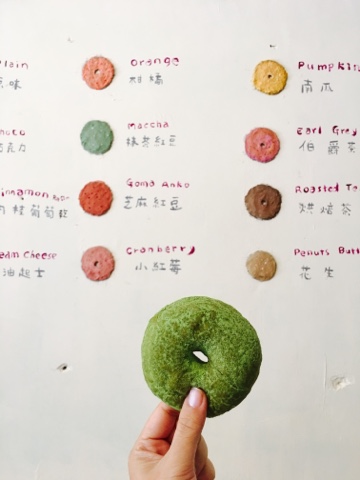 Kid friendliness: kids will probably like the gooey chocolate or plain 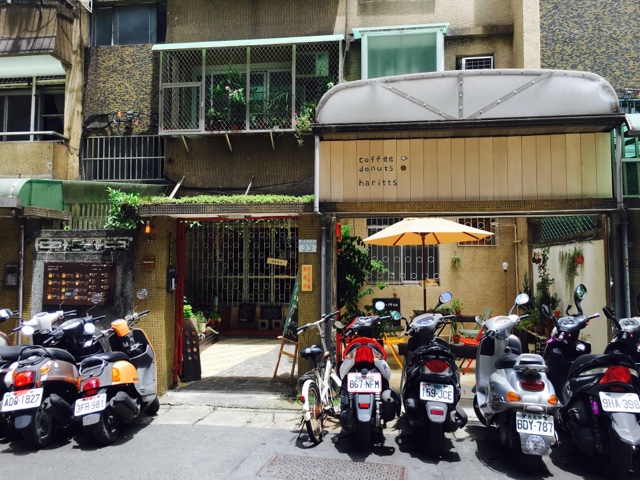 I finally made it to Haritts Donuts which I had been seeing it on instagram for months. I just got back from LA where I had indulged in a a number of donut shops (Sidecar & DK in LA and Doughnut Plant & Dominique Ansel cronuts in NY) and craving donuts. 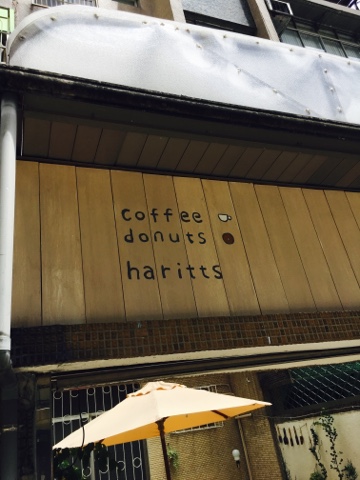 Haritts is on a one way alley, a block away from Fuxing N. Road. The hand lettered signage on the entrance and on the menu inside gives it an artisanal charm. 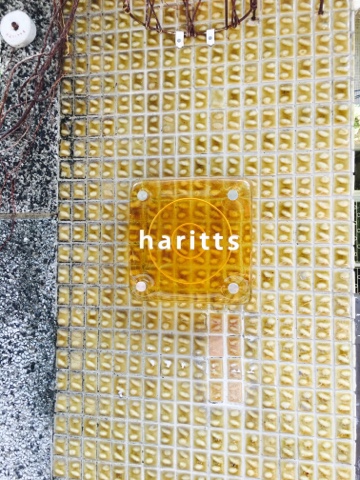 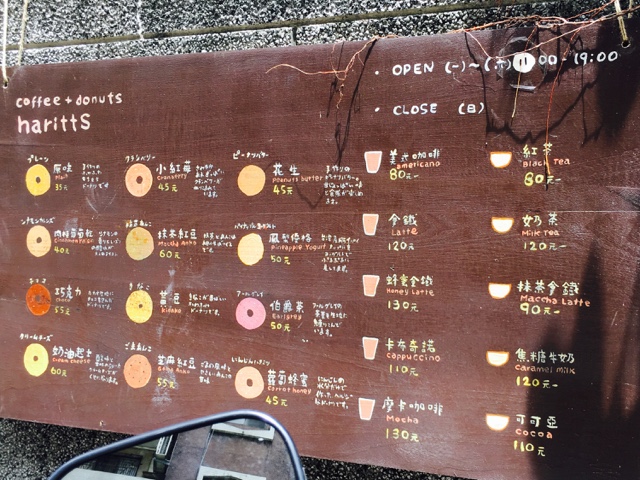 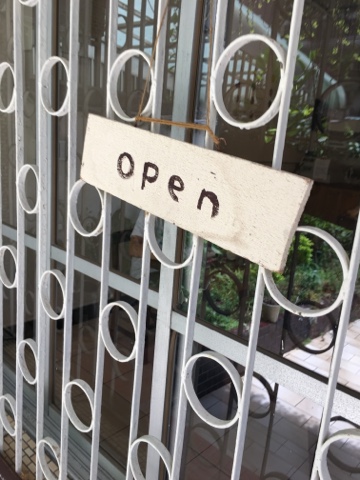 There are a few tables to sit inside to enjoy your coffee and donuts. 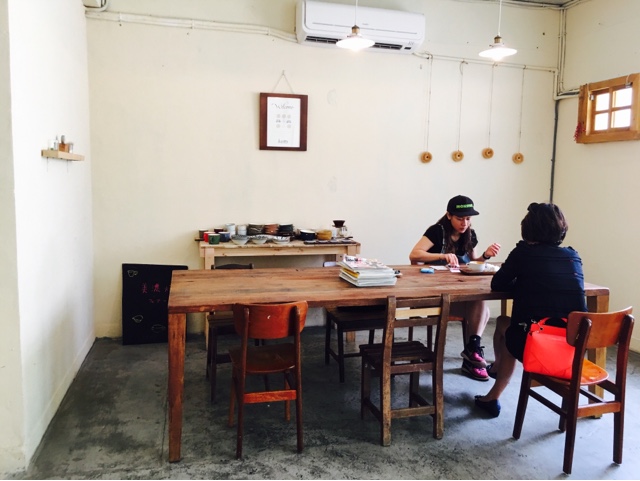 Besides donuts, they sold packaged rusks and coffee and tea. 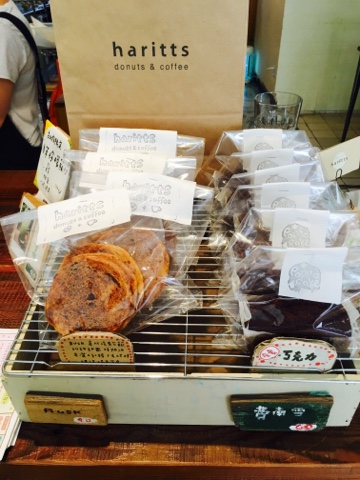 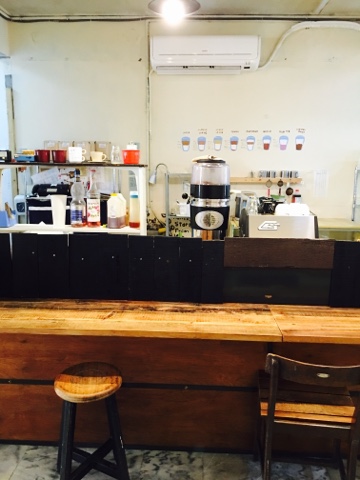 The donut menu is on the wall, with the same lettered signage in English and Chinese and drawings to show the dozen or so flavors. But not all the flavors were available that day even though we went around 11AM, quite close to opening, only whatever is on display in the glass counter.  They have a monthly schedule of donut flavors, available on their Facebook page (in Chinese only). 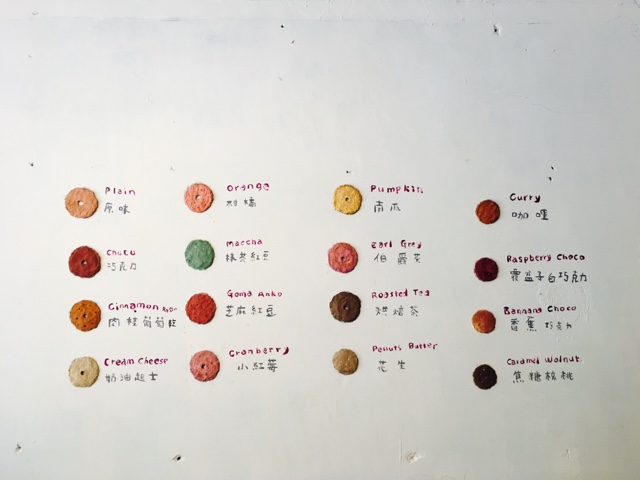 When you get them, they are wrapped in paper with cute stamps indicating the flavors on the outside folded flap. 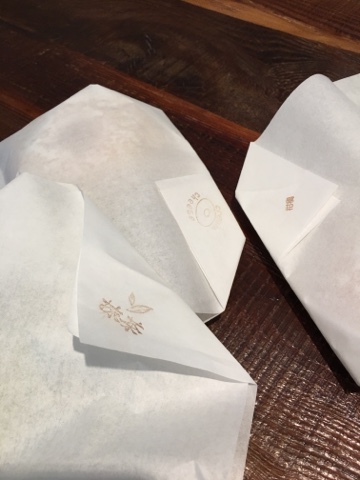 I had to try one right away, so I tried matcha first. The donut was soft and pillowy, lightly dusted with green tea powdered sugar. But it tasted more like a bagel shaped bread dusted with powdered sugar  than the yeasted or cake donuts that we typically think of with we think donuts. Light and not greasy and comes in a dozen or so flavors, though only half were available when we went at 11AM opening yesterday. And you won't find any sprinkle or frosting covered donuts here. 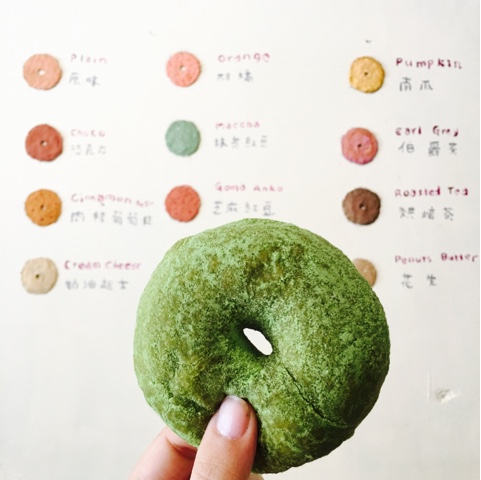 The cream cheese had a bit of flavored cream cheese inside. There was also a matcha red bean available with red bean inside and a caramel walnut with candied walnuts inside, instead of jelly and custard. 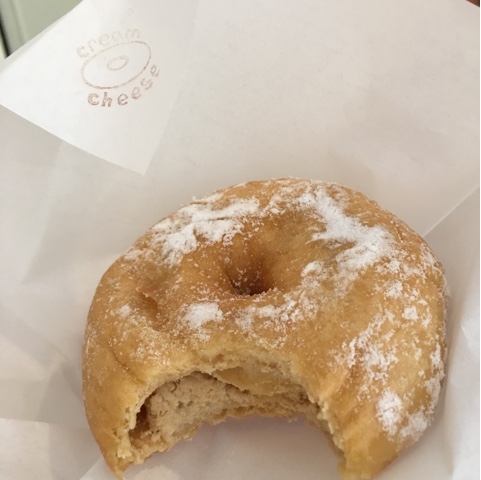 Last minute I decided to get chocolate and I'm glad I did. It had a bit of gooey chocolate in the middle, and was the most sweet of the four I tried. Of course, it's not going to be as sweet as the chocolate donuts from the states, but I guess that's why Haritts works for Taiwan (and Japan, where it's from). It's like a healthier version of a donut that doesn't taste greasy even though it was fried. Also, try to eat the donuts the same day. My best bite was right after buying it-- the donuts the next day were definitely staler and not as satisfying. 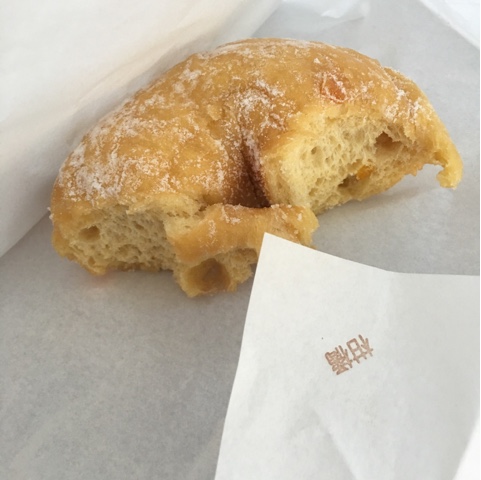 Did I enjoy Haritts' donuts? Yes. Did it fulfill my donut craving? Sort of. Still might have to revisit Voodoo Doughnuts Taipei for a maple bacon bar. But it's not so bad to have an healthier option for donuts to go to. 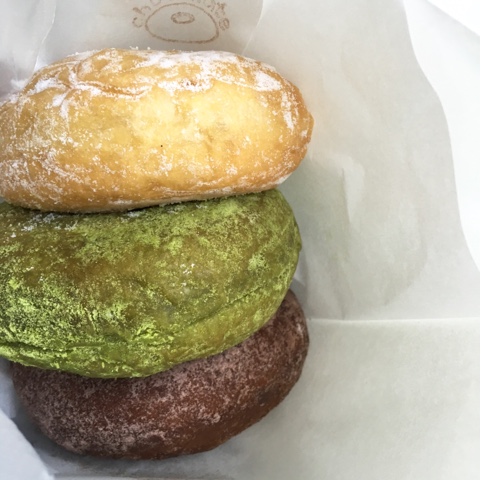 I like their cream cheese and chocolate ones!! So good! :)

Doughnut plant changed my life when I lived in NYC. I have been trying to get to Harrit's too. Hopefully soon. Great post as usual.

@naomid- i visited doughnut plant when i went to NYC! hope you get to visit haritt's soon