hungryintaipei recommends: 7 PLACES TO SATISFY SO CAL CRAVINGS IN TAIPEI Whether you've lived in Taipei for one year or for eleven (like me), you will inevitably end up craving a few things from home. When I first moved back to Taipei in 2005, the things I missed most was Mexican food as it was difficult to find and when you did find it, it didn't mean it would be very good. Then it was trying to find LA style pho or kbbq. Then salads. Anyone who has lived here longer than five years can appreciate the new waves of cafes, restaurants, bistros, brunch and bakeries that make Taipei more diverse in its food choices every year, when you don't feel like Chinese food.

Every summer, I get a chance to go home to LA and eat at all my favorite places, and this year I found some new favorites. The biggest trend in LA this year?  Build your own poke bowls, with at least a dozen different shops opened across LA just in the last year or two. This one is from SEA SALT POKE on Sawtelle.  Let's see who brings pokemania first to Taipei. Maybe NCIS?

Inspired by my travels this year, I'm going to try to put together a series of posts of how to find different cities in Taipei-- Paris, Tokyo, Boston and LA, for starters. Here is my take on where to take yourself when you just can't eat another bian dang and you're craving pie or tacos.

7 PLACES TO SATSIFY SO CAL CRAVINGS IN TAIPEI

Lobster Bar was the first to cause a flurry of lobster roll photos to spread on my social media in Taipei when it opened a few years ago. Lobster Bar's lunch menu is a limited business menu, while they have more options like oysters and uni pasta at dinnertime full menu. Note they also do not serve the lobster roll on weekends, instead they have a brunch menu with a lobster sandwich and eggs benedict. The lobster roll and fries are not cheap at NT$680, but you know, they are pretty expensive in LA and Boston too! I will also have to try the newer Lobster Foods and Le Kief.

Both Totto Ramen and Tentenyu offer tori paitan ramen, which simmers chicken and chicken bones for hours rather than pork, for an equally rich and satisfying bowl of ramen. Both are relatively new shops in their neighborhoods. Totto Ramen opened in Taipei in late spring of 2016 this year, while Tentenyu also just opened a few months ago.

My dad absolutely loves the dungeness crab in whole shabang sauce (mild spiciness) so much that we have taken him to Boiling Crab for the last four years since we first took him. So I was fairly excited to try Brookhurst (and other restaurants that were inspired by Boiling Crab but have since closed) to see if they could be a good spot to take my dad. Brookhurst has done their own thing by adding options like scallops, lobster or noodles, and even serving the combos in large skillets instead of plastic bags.

I haven't been to Cyclo since it moved to its new shop near ZhongXiao/Daan, and their offerings aren't going to be as varied as the shops you'll find in Garden Grove, but they have a solid bowl of pho, bottles of Sriracha and crispy egg rolls. Yes, there are ton of mom and pop Vietnamese shops in Taipei, but this is going to be the one most like what you'd find in LA. They've also opened a branch  in Neihu last year.

Let's not even pretend that what you are going to find in Asia is going to be the same level as what you would find in LA/Cali, but unless you are going to make your own Mexican food or fly to LA, you have slim pickings. And you know what, Machos delivers a solid baja style fish taco and chimichanga (though their nachos could use more cheese) and Twinkies is off to a good start with their tacos, but I don't want to hear complaining it's not as good as Cali. That's a fact, IT WON'T BE THE SAME, just like how beef noodles and dumplings aren't going to be as good and cheap in the states.

Sam Won Garden is my go-to place for when I'm craving galbi and mul naengmyeon, or short rib and cold noodles. Just like the Vietnamese food scene in Taipei, there are a ton of little localized places here, even in every food court, for when you want bibimbap or Taipei style kbbq, but Sam Won is the most LA-ish of them all. It's a big enough restaurant to host your group of 20, they give you a bowl of the Korean lettuce salad that has the slightly sweet and spicy dressing, and they have chewy, soupy cold noodles on the menu. 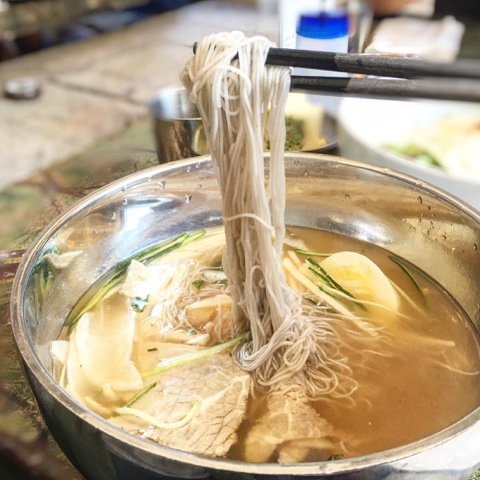 I can't be the only one craving American style pies in Taipei. There is no shortage of lemon tarts in bakeries here, but it's not the same as a towering slice of pie with a crown of torched airy meringue. I semi-regretted getting the slice at Gulfstream since it's $12 a slice now (you can practically get a whole pie at Marie Callender's for that price), but it was still amazing. While Drip Cafe is known for their cronuts, I fell in love with their lemon meringue pie (and banana cream pie).

Where is the first picture from? Is that rice bowl available in Taipei?

It's my first time leaving a comment, although I have been lurking for a few months, ever since I learned I would be coming to Taipei. I am here now and having a great time trying some of the places you have recommended, it's quite an adventure when you're alone and don't speak a word of the language as is sadly my case! I wish I could stay here for a longer time to keep discovering what this great place has to offer, but I absolutely understand you with the So Cal cravings: I've only been here for a few days and I can truly feel the carb overdose - I'd totally eat a salad for lunch today!! I'm not going to, it can wait until I'm back in NY, but still.
Thanks for all your great recs!

@anonymous- the first pic is from Sea Salt Poke in LA, as mentioned below the pic.. Not available yet in Taipei

Ubereuropean- thanks so much for UN-lurking (?!) and leaving a comment.. I'm happy the blog has helped you find some places :) my cravings have lessened over the years, but it really is amazing how globalized taipei has become!

Cyclo at Neihu location has closed down. However, Cyclo did not update their website so the location still remains open on their website. I tried to visit on Oct 7, 2016 during dinner time. Too bad, my wife and I were trying to find a good Vietnamese place in Neihu. :(