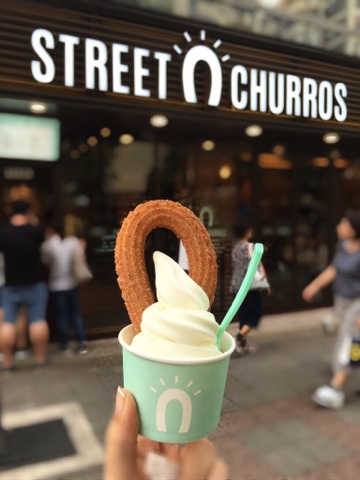 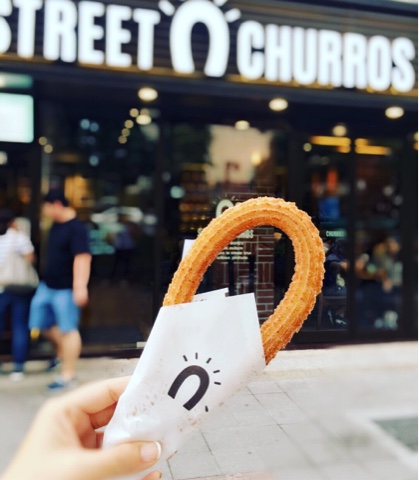 Churros were always a treat when I was a kid. I can't remember if my first churro was at Disneyland or Costco, but I remember being happy when finding out Costco Taipei as well as the movie theaters also sold churros here. So it's interesting that we've seen a resurgence of churros, but with a twist, literally.
Opened a few months ago, Street Churros sells churros bent into horseshoe loops that are made to order, and pretty tastyyyy, rolled in cinnamon sugar. (NT$80) There's also a mini churro version w soft serve ice cream (NT$120) or a savory version as a bun for a hot dog (NT$130)!!! 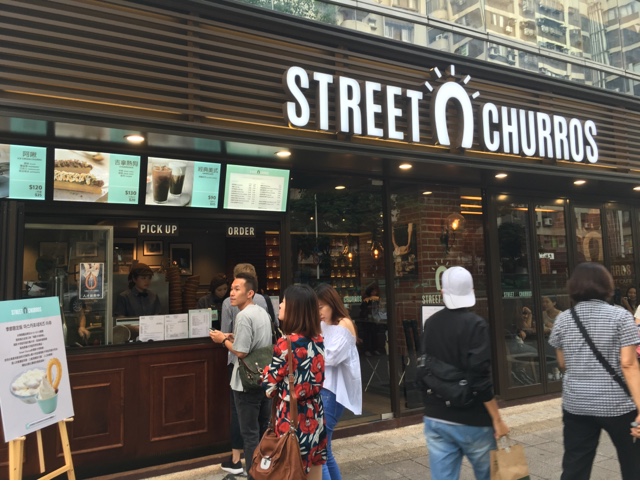 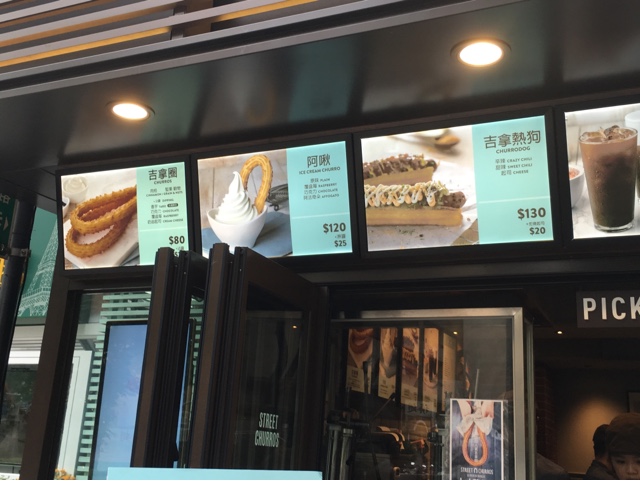 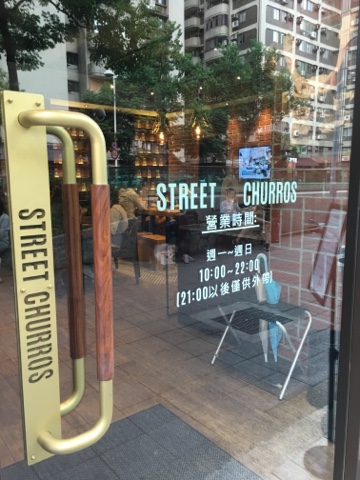 After you place your order at the window, you can see the churros being extruded into the fryer and made to order. There's something to be said about freshly fried dough. 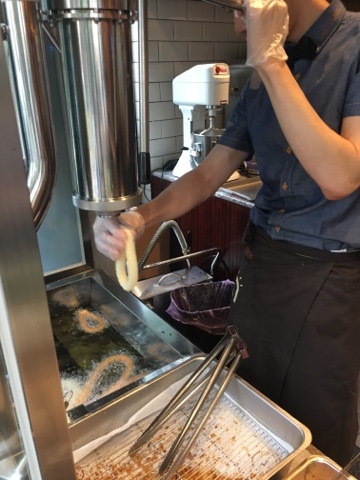 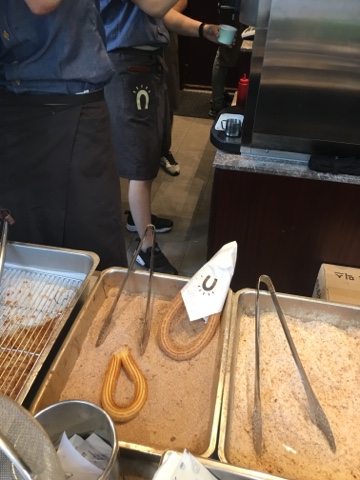 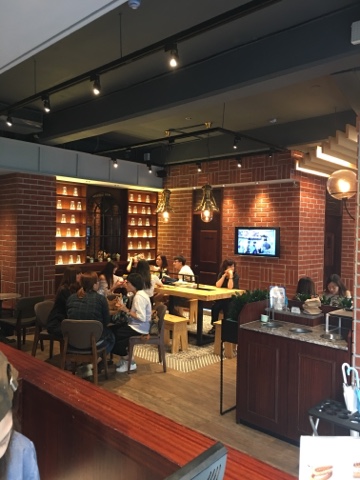 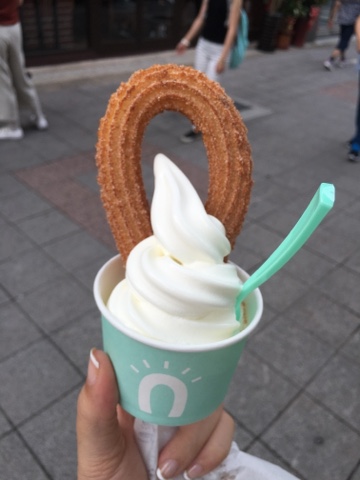 You can see the regular churro is probably twice as long as the mini version with the ice cream. So depending on if you want all churro or a bit of each.
I've spied this for awhile on Instagram with places like The Loop in LA, which take it a step further by letting you coat your churros with sprinkles or cereal. 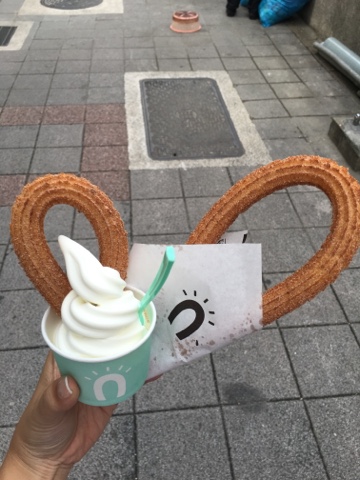 There's something so satisfying about eating something hot out of the fryer. It's moist yet crispy and has enough sugar and sweetness to please a sweet tooth like me. That's why I like to try to only buy Krispy Kreme when the "hot doughnuts now" sign is on because something magical about the optimal taste and temperature when it's fresh. I can understand why this could be an occasional treat, especially compared to some bad experiences with dry reheated frozen churros. It didn't taste oily and I would totally try it again. 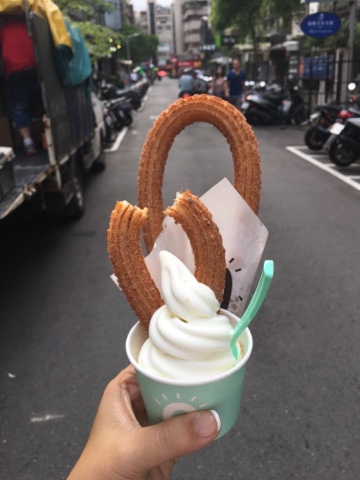 Even the paper that the churro comes in comes with cute doodles on the back. 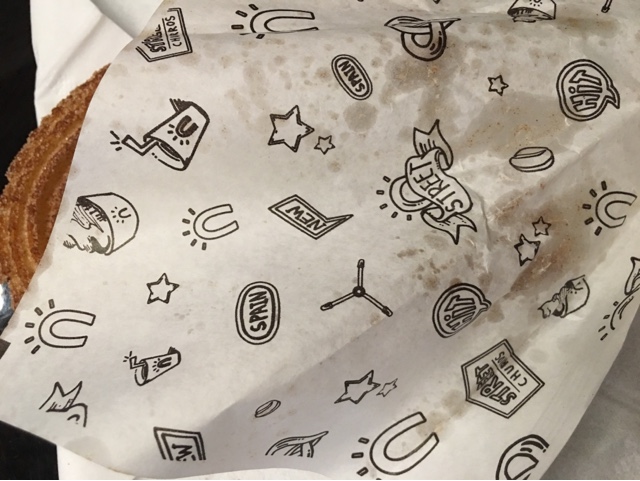 Other options for churros in Taipei include Churro K (I've never been) and Macho Tacos which offer mini churros. Spanish/Mexican street churros by a Korean company in a Taipei shop is definitely a sign of globalization. Now just waiting for @churroboroughla to come to Taipei!
Posted by joanh at 1:08 AM

Email ThisBlogThis!Share to TwitterShare to FacebookShare to Pinterest
Labels: dessert

i love your blog and blog post forstart a coffee shop business. thank you for shearing that post.