Since I met friends at Joyce Cafe for afternoon tea, I didn't get a chance to check out the lunch/dinner menu. Instead we got their afternoon tea special which featured a three tier tray of goodies and drinks for two or more people to share. The tiers included finger sandwiches, dim sum, baked muffins and scones assortment, and cakes/desserts. The sandwiches were tuna and mini-club sandwiches; the dim sum were egg rolls and fried shrimp on top of tofu; the desserts included a carrot and chocolate cake. I liked the finger sandwiches and dim sum- they were bite size and disappeared quickily from the tray. The muffins and desserts on the other hand were kind of dull to me, lacking in special flavor or texture. 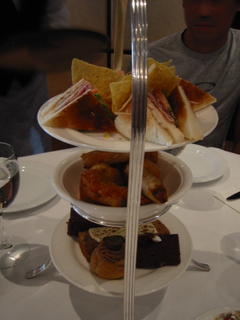 I happened to order a drink that wasn't included with the afternoon tea, which was iced hot chocolate, which was just like it sounds icy and chocolately. But I don't know if it was too sweet or had too much ice, I didn't really care for it though it came in a tall glass with a fun straw. Maybe I should add that I don't like chocolate milk or chocolate ice cream, though I am a fan of mocha frappacinos and hot chocolate. 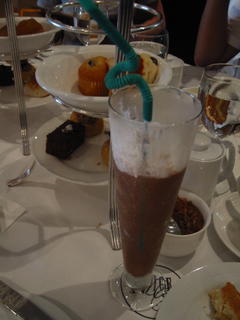 Our friends got the waffles with fresh fruit, which seems to be more a dessert or afternoon tea dish rather than breakfast in most places here. When I was here last year, my cousin and I went on the hunt for american style breakfast, or the perfect waffle, in which we took taxis to at least 3 or 4 different places, before we ended up at the Formosa Regent Hotel restaurant which did serve a pretty good waffle. The waffle here at Joyce Cafe was also pretty good- the waffle was thin and crispy, and served as four slices with fresh raspberries and blueberries, as well as syrup on the side. 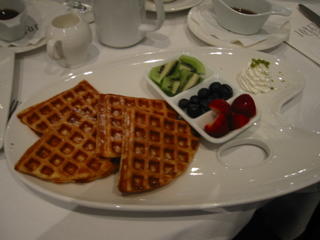 The service is a little fussy, but still needs work. One of my friends ordered a salad, which was never ordered or brought to the table. Perhaps they had too many servers not talking to one another. We also got amusement from the speed they liked to remove plates from the three tiered tray. We would put up plates to share food and soon as it was emptied, someone would come by and take away that plate. There were a lot of people there with afternoon tea special trays on their tables, so it seemed like a popular option. But it's on the pricey side, especially if the desserts that come with it are not as good as desserts you could get somewhere else.
Posted by joanh at 8:21 PM

The presentation is very good. I guess this is not the authentic English hi-tea, huh?