Sweet Dynasty is probably better known for its desserts (as its business card states it's a "specialist in Chinese Desserts"), but has a lot to offer in terms of dim sum and quick delicious Cantonese food. Apparently, Sweet Dynasty has original locations already popular in Hong Kong, and its Taipei location is always busy and you will usually have to wait for a table as they don't take reservations.

The extensive menu features much for you to choose from, such as different types of dim sum, noodles, congee, stir-fried dishes, desserts and drinks- ranging from NT$60- NT$200+. The affordability of each item lets you have a wider selection, whether you are by yourself or sharing with a group. The walls of the restaurant have black and white photos of customers at the restaurant, perhaps from its earlier days or at its Hong Kong location. It's a pretty large space, brightly lit, with lots of small groups in midst of conversation and eating. I was happy to find out on this time that they do have a menu in English and you can order the item by its number. Sometimes you have to wave down a server to place your order, but they bring the food and clear the dishes pretty quickly, probably to help turnover the tables.

We ordered drinks first, and I had an almond milk tea boba, which was a little more watery and the boba were a little soggier than I would like. I usually finish my drink, but I drank a little over half throughout the meal. 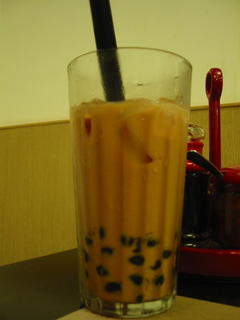 We got an assortment of dimsum, a pork/thousand year old egg congee, wonton noodle soup and veggies to share between four friends. If you order dim sum to share, note that each order comes with 3 pieces. For the dimsum, my favorites were the bbq pork bun (chau sau bau), shrimp dumplings, shrimp rice noodle roll, and of course, the deep fried sticky rice ball (shien shway jiou) which is actually not widely available at a lot of dim sum places. Everything comes out fresh and hot, rather than on a cart where you aren't sure how long it's been there, especially for the fried dishes. 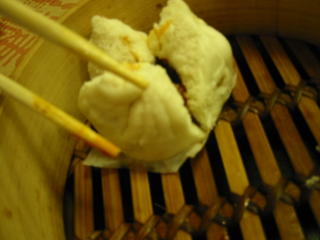 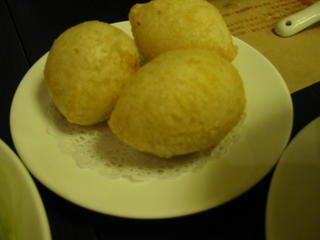 I also really enjoyed the pork and thousand year old egg congee or porridge rice, which came with the right amount of each and wasn't too soupy or thick. The wonton noodle soup was a little bland to me, with no distinguishable flavors from either the wontons or the noodle or the soup. Also, the beef rice noodle roll was a big miss- as the first time, the beef was a little pink and undercooked, so we sent back and the second time was still not that tasty. I will stick to the shrimp rice noodle roll, or try the vegetarian mushroom one next time. 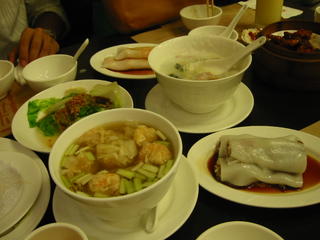 For dessert, we ordered its specialty Wood Bucket Tofu Dessert (dou-hwa) (NT$220) which can serve 4-8 people. We each had 1-2 bowls each and still had almost half left to take home. It's fun to scoop out your own portions of the slippery, smooth dou-hwa and then add the amount of sugar syrup to your liking. You can also order dou-hwa accompanied with other things, such as almond milk or fruit- the selection is quite extensive. 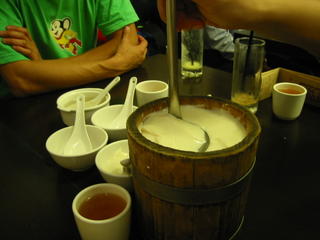 We also ordered rice balls on the side (NT$30) which I thought were the smaller pink and white kind that come with shaved ice, but they were the larger kind with sesame on the inside. They were chewy and hot, but a little too chewy- maybe could have been boiled a tad bit longer. 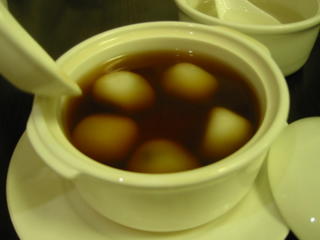 The menu has enough stuff on it that you could probably order different things each time you come. So whether you are coming just for dessert, or for a whole meal, check out Sweet Dynasty, and hopefully you won't have to wait too long for a table.
Posted by joanh at 6:36 PM

know your menus, it could be a while to make your selections.
FOOD 2.5/5 (DESSERT 4/5) SERVICE 2/5
LAST WORD: there is a reason they call it sweet dynasty. save room for desserts!

Hey ya, how can i find the website to this place? I tried serching on the net but can only find HongKong's website.. .. ..

If I didn't include a website then I most likely couldn't find one at the time that I posted. A lot of Taipei restaurants don't seem to have online presence, and if they do, it might be all in Chinese. If I find one, I will update you!

Been to the one in HK which was at near year and shared a table with complete strangers but it was fun passing around our food to the correct person. http://www.sweetdynasty.com.tw/

Is this restaurant serving Cantonese dim sum or Mandarin breakfast?

it's going to reopen in that building where world gym is, right across luxy.