About eight years ago, I made a trip to Taipei after not having visited for over 13 years. One of the first places my uncle to me to eat was Tony Roma's. It's sort of funny that he assumed that I would want to eat American food when at that time as a tourist, I wanted to eat Taiwanese food, night market food, beef noodle soup, dumplings. Now as a often-resident of Taipei, I can enjoy the luxury of eating both Asian and American foods here.

The first time I ever ate at a Tony Roma's was in San Francisco, with a group of friends- all but one who had never been there before. Each of us ordered something other than the ribs, except for the seasoned friend, and when our orders came we each regretted it and eyed his ribs instead. So the same applies here- order the ribs- regular slab, original flavor, with a side of corn on the cob and a baked potato. At least that's what I usually get. 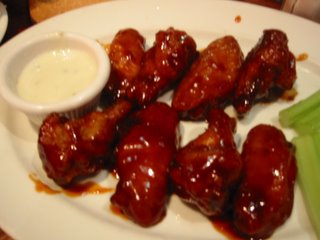 The Carolina Honey Wings are a stingy 8 pieces for NT$210 (about $6). The skin is a nice crispy and sticky sweet crunch in your mouth, but you definitely need the wetnaps afterwawrds.

The caesar salad is pretty ordinary but relatively fresh. 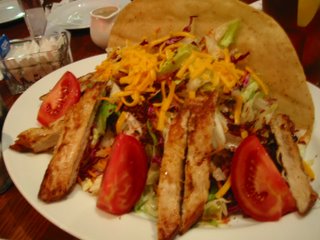 The Santa Fe Salad comes with a crispy tortilla shell that looks like a giant taco shell is surprisingly tasty, while the salad is underwhelming with a weird mustard dressing. 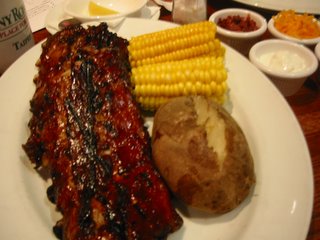 The ribs are usually fall off the bone tender, with a sweet bbq sauce slow roasted flavor. Two of three times I've eaten here, all the ribs were tender and delicious and perfectly flavored. The third time, some of the meat on the ribs were a little tougher and slightly overcooked compared to the moist ribs of my previous experiences. The baked potato is a good medium sized potato with the option of having it loaded with all the toppings (cheese, sour cream, butter, bacon). The corn is usually pretty good too, but on this same third occassion, it was very dry and starchy and also not hot at all- as if it was frozen after being microwaved too long and then plated after it had been thawed. I took a few bites and disappointedly left the cobs on my plate. I almost wanted to complain.

The first time I took take out from Tony Roma's I actually did complain. I was craving baked potato (for some reason) and ribs and got an order to go. After picking it up, returning home, and plating it up, I noticed that all the sides for my potato were there, but not the potato itself. I was pretty upset to tell you the truth- I did not want to drive back just for a potato, but I also really wanted to eat one. I called and complained because I did want them to know and the hostess was very nice and said that they would take my name and "replace" the potato the next time I went in. I thought it was sort of silly, but we actually did that, and in addition to the free baked potato they offered a 15% off discount from that night's meal. I thought that was service that made me want to go back. The service is generally friendly, but not perfect. Sometimes all the waiters are grouped nearby and sometimes they all disappear together. Sometimes they refill your mug of water and sometimes you have to wave them down.

There are many booths and tables so it's good for large groups or those with families. There are also many couples and people in business suits. The red neon Tony Roma's sign out front makes it a little easier to find, as the entrance is on the side. Noticeably, the third night I was there, they played a collection of old songs that seemed like a blast from the past including "Rush Rush" by Paula Abdul and "Wannabe" by Spice Girls. It wasn't bad, just amusing- like they were playing an old corporate cd from six years ago or something.

The two desserts we got (NT$100-250) were the Skillet Cookie Sundae and the Apple Crisp. 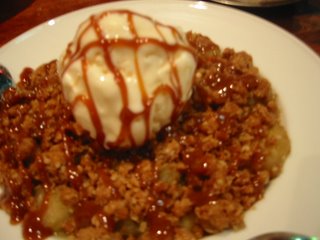 The Apple Crisp has a layer of mystery granola crisp stuff that is a little too crispy and sweet over the apple filing which tastes good with the scoop of vanilla ice cream. 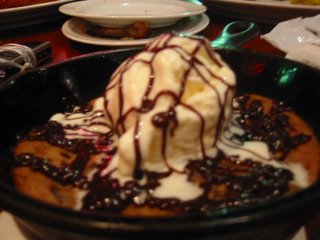 The Cookie Sundae which only comes in chocolate chip, looks a lot bigger in the menu's picture and should probably be eaten hot. We ate ours lukewarm and it was dense and had hardened and all the ice cream melted over it. I'd stick to the Pizookie from BJ's.

So the rule of thumb from my very first visit still applies here too- don't order anything else, just the ribs. That's what they are known for, and everything else is not as good and not worth the prices that they charge.
Posted by joanh at 7:07 PM

All this talk of Tony Roma's makes me want it all that much more! Sadly the nearest one is near Disneyland... boo hoo.

we should eat it when we are back.. there used to be one really close, but now the closest one is in beverly hills.

I love their ribs, too. Did you know that they're closing at the end of this month? Sad. :(

REALLY??????? I haven't been in awhile, but that would be awful. They have been around forever!