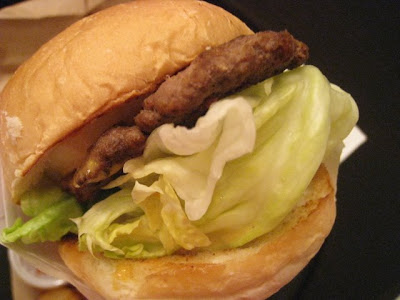 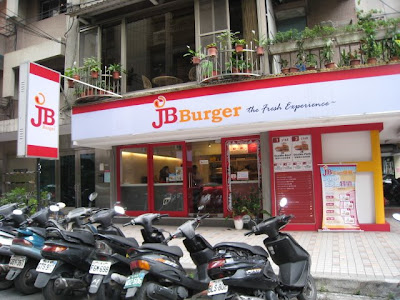 A semi-new little burger place near Lane 216, JB Burger looked promising. The bright white, red and yellow sign and menu and fonts that oddly reminded me of In N Out (a very popular burger chain in the states, in case you've never heard). Maybe it was the promise of "the fresh experience" or the English menu with the double patties or the fat onion on the burger.

Anyways, it was enough to draw me in for a "snack" before dinner "research" at around 4:30PM. And it had quite a few other people who felt the same, eating inside or waiting for their order. 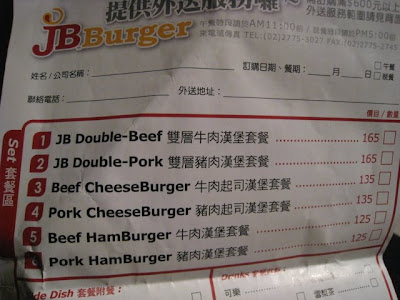 The pros: they offer not only a beef patty, but also pork patties. Their fries are freshly cut and fried and they offer veggie sticks if you want healthier fare. If you can read Chinese, you might spot their options menu on the counter which says you can ask for grilled onions or other styles for your burger. They also have coffee/latte, Budweiser and Root Beer as drink options.

The cons: they were out of their fresh cut fries and only had potato slice(NT$40). 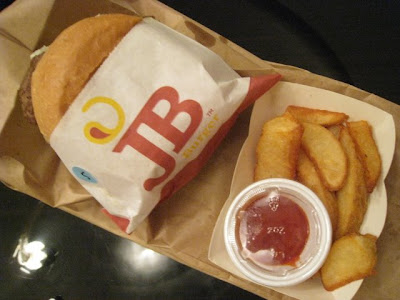 Also their beef patty in my burger (NT$65) was much, MUCH smaller than I would have liked. It looked small on the grill and even smaller next to the huge hunk of lettuce they stuff inside the burger. 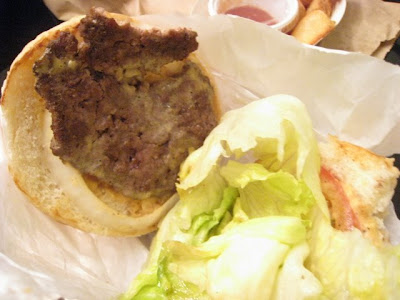 Overall, the taste is not bad, but it's just an unwieldy bite. The huge lettuce actually makes the burger harder to eat since it's not pulled apart for you. It's not an anomaly since I saw them putting together other burgers with other semi-wedges of lettuce. They also add a thousand island like dressing without asking.

JB Burger has been open since April 2008 so it shouldn't have any more opening kinks to work out. All in all, it's one thing if your burger is small but fat OR skinny but wide enough for the bun- but my burger patty was neither and just not enough to be satisfying or fill out the bun.

And I shouldn't have to get a double patty burger to feel full either.

Granted for these prices, it is nice to know I'm getting a freshly made burger and I'm not asking for a burger like I'd get at Chili's, but I shouldn't have to think that I'd rather get a Whopper from Burger King while I'm eating it.

Have I been brainwashed into thinking everything should be American-style "supersized?" or am I justified in my gut feeling? My burger doesn't even look the same as the ones on their website and outside their store.

Guess we'll just have to wait to go back to LA to go to In N Out for the real thing, or maybe finally try out Mary's Hamburger or California Grill.
Posted by joanh at 9:48 PM

Email ThisBlogThis!Share to TwitterShare to FacebookShare to Pinterest
Labels: $$ depends on what you eat, american, burgers, CLOSED, hungry girl in taipei doesn't recommend

There is a small hamburger place called 漢堡主義 (Hamburgerism), on Li-Shui street, #5-5. (Yung Kong district). Portion is rather small but tastes very good. Its next to a small (also) Vietnamese place. I have tried that place too. Recommended.fs

mmm yeah this looks too small for me too... for $65 i really would rather have a whopper from BK here. Have you had the burgers at "the Diner"? That american style "diner" on Dunhua S. Road... behind Carnegie. i haven't tried but was wondering if you did.

oops!! i just saw your post on "the diner". haha ok well i'll be sure to try it when i'm there this weekend. thanks for the info!

The best burger I have had in Taiwan was at Evan's Burgers on Shita Road. It's in the alley opposite from the Shita night market main entrance. For $2500NT you get a huge juicy burger with fresh fries and refillable soft drinks.

Between The Diner, California Grill and KGB (a most welcome addition), you have three of the best burger restaurants in town, each with their own distinct style. Anyone else entering this market better do something pretty damn good if they want to compete here.

ron wu: cool.. will have to try both!

hellobeebs: yeah.. whopper over this anyday. yup! the burgers at the Diner are pretty good.. i just had a mushroom and swiss the other day

anonymous: i've heard about Evan's! Will have to check it out, thanks.. and hahaha for NT$2500 it better be made out of kobe and foie gras and lobster! j/k

nesiote: i haven't been to california grill yet and where is KGB?

If you try Mary's next to Tosteria, I'm sure you'll like it. It looks similar to the JB burger but the meat patty is significantly bigger. It's a mere NT$75. I've seen pictures of Evan's burgers in magazines like Taipei Walker and they do look really good. I'd like to try it too someday but that area is out of the way for me.

California grill has the best burgers in Taipei hands down. get the Mofo Chicken burger. its got bacon and their homemade garlic mayo and a little bbq sauce. its my favorite burger here and holds up to any burger in the states.

I disagree with CGM, KGB has the best burger forsure(blue cheese yum) but Diner and Carnegie's are a super-close second. California? It's pretty good. JB's? Unless they can make it like the pics, stay away!!! :D

Evans Burger is the worst. I went in on a Sunday afternoon, around 4:30pm, and they must have been doing a shift change or something. First the girl gave me a Sprite in a glass that was just returned (dirty) by a waitress......when i asked for a clean glass please, she said they were done being washed yet? I told her i would wait, thanks. I ordered the Chiliburger, when it came out it was missing the Chili....so I asked to speak to the manager, the conferred for a while and came back and said there was no manager, and the manager didnt like to have his/her name cards given out, and apparently didn't have a name either. I had been there twice before and it was good, but this time sucked.

Went to JB this evening for the first time. They have added Mt. Dew and Dr. Pepper to their beverage menu. Also, I had the "Juicy Lucy" burger ($195NT), and with two patties it was plenty big enough to satisfy. However, the food was on the greasy side for me and the middle of the patty was a little pinker than I would prefer from a small Taiwanese restaurant.

The place totally reminded me of In and Out though and made me want to pull them aside and teach them about animal style and how to properly cut their lettuce and get them to offer jalapeno peppers with their burgers and make them awesome...but I'm too lazy and they probably would listen.

I've lived in Taiwan for three years and I stand by my Evans Burger with 1885 making slight inroads.

Love the blog Hungry Girl. Keep it up!

nothing comes close to an In & Out Double Double ~~