not taipei/california: i strongly recommend the OC County Fair 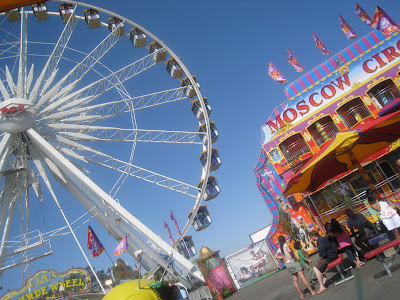 I've never been the OC County Fair, but we decided to check it out a few weekends ago after hearing about it from some friends. It seems closer than the LA County Fair out in Pomona and we ended up being there for 8 hours, riding the roller coasters and giant slide, picking up a set of keepeez lids and getting slightly sunburnt wandering the fair.

I was on the hunt for funnel cake.

I love funnel cake and since it's pretty much the combination of being sweet and fried, it's right up my temptation alley. For some reason, I ended up getting it from a vendor with a huge pink sign, and it was the wrong call. The funnel cake with strawberries and whipped cream came out a bit too quickly for being fried-to-order and tasted like it was probably fried awhile ago- lukewarm and not crispy. 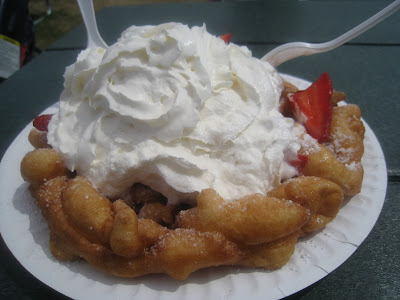 It did have a pile of fresh strawberries and addictive whipped cream, but I should have complained and taken it back to ask one be freshly made. Perhaps it was an excuse to try funnel cake somewhere else.

Walking around, I was in awe of all the things that were offered up as fried. It was like a live version of the thisiswhyyourefat.com- fried smores, fried twinkies, fried oreos, fried white castle, fried avocados, krispy creme doughnut burgers, zucchini weenies, fried artichokes, huge turkey legs, and... fried frog legs? Ewww. 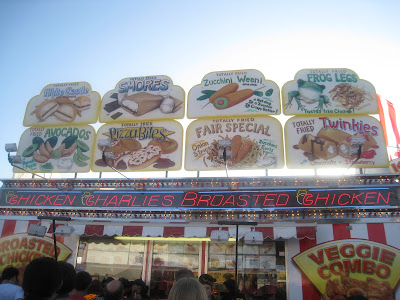 When my sister ended up joining us later in the day, she and her friends vowed to sample as many of the crazy fried foods as possible, so of course I had to steal a few bites.

The fried smores tasted pretty much like tempura batter- I couldn't really taste any chocolate inside or marshmallows. It was a big gooey mess. 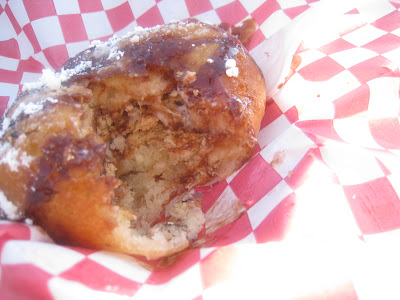 The zucchini weenie was surprisingly tasty- I guess the vegetable part of it makes it less unhealthy? 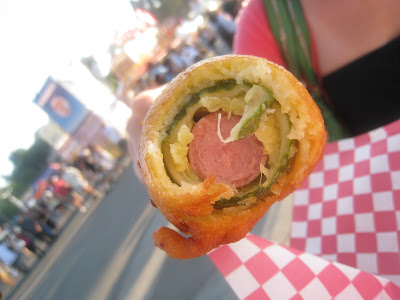 I then pointed her toward the vendor that I had thought about trying, but thought was too expensive (I think it was around $10)- Mexican funnel cake. What makes it Mexican? Instead of regular batter, they make it like a super long Möbius strip churro.

And I have to admit, the Mexican funnel cake tasted pretty fantastic. 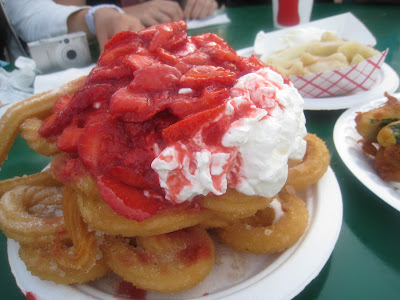 It was huge enough to share with at least five other people- and this was the regular size- there's a bigger jumbo size.

Make sure to also get the apple fries. I've never had apple fries before, but they were like eating the good stuff straight out of an apple pie, but slightly crispy with powdered sugar.

And if you're curious, you can also pick up some chocolate covered bacon from the vendor bringing you the Mexican funnel cake. There were a few long strips in a chinese take-out box, chilled and looking like regular chocolate. Taking a bite, I tasted the crispy saltiness inside the chocolate and it was a weird savory, sweet mixture of flavors. 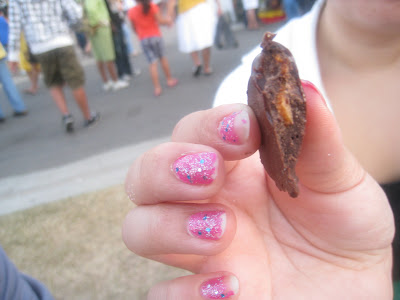 I had a lot of fun at the OC County Fair despite paying $6 for a giant ICEE and other hiked up amusement park prices for food and drinks. There was a Dasani flavored water booth near one of the entrances and they were giving out free bottles if you tasted their water and filled out a short survey. They also had a free petting zoo and elephant and pony rides. Lots of rides for adults and kids and lots to eat. I think they have special promos on certain days, you can check their website- otherwise it's a $10 admission fee for adults. 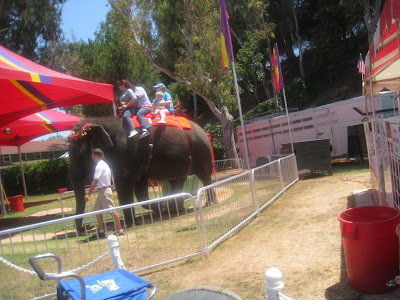 Were there any must eats that I missed? It ends on August 9th, so there's a few weeks left to go back and try some of the other things before I leave the world of funnel cakes and back to the world of stinky tofu.

I was at the OC Fair the first day it started this year. The entrance and parking were free. The had a big Dr. Pepper "club" area with free samples right next to the entrance. I stood behind Seth Green in a roasted corn stand. Fair food is super unhealthy and way too expensive.

I prefer the LA Fair. But many of the vendors at the OC Fair will be at the LA Fair next month.

Hope your trip to LA was a good and that you got in some of the new LA trends, like The Counter. I see you caught some Kogi in another post.

hi Populasian! Thanks for sharing your comment! Yes, crazy unhealthy, but fun to look at. I've been to the Counter awhile back so I'm hoping to try out some of the new places I've been hearing about like Animal and Bazaar.

The Counter and Father's Office have been around for awhile now.

In OC, you might want to try Boiling Crab.

population: never heard of Boiling Crab! I'll have to look it up. But yup, been to Father's Office and the Counter- I think I like the Counter better....

Ooh, I was waiting for someone to do a post on the OC fair. The one thing I didn't have room for after going to the SD fair was the mexican funnel cake. I really wanted to try it, but it's so big! Now after reading your review, I wish I had tried it. I'm tempted to visit the OC or LA fair just so I can get it!

kirbie: thanks! i thought it was too big too, but you should try it the next time you see it!

stuffed/fried avocados are so delicious! they sell them at a mexican restaurant near me..stuff them with fajita meat and cheese. yum!

OMG...your post makes me miss the LA County Fair so much! I can't wait for it in September!

Okay if that's a regular sized funnel cake, then a jumbo must be able to feed three families...

Hi! I was at the LA County fair this last trip home.. Couldn't quite get myself to try anything fried. Wanted to try the fried sweet potatoes to see how they compared to TKK's, but not something I really needed to eat in 105 degree heat. (love your blog.. keep up the good work!)