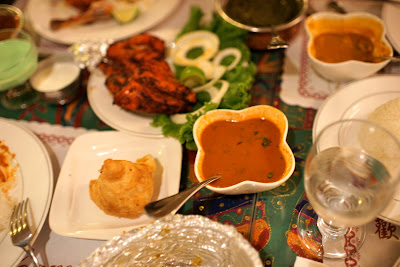 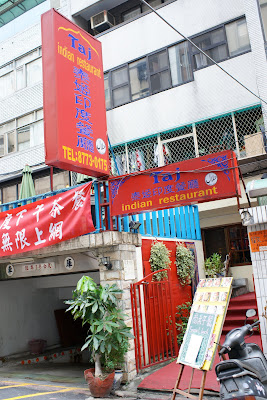 My first visit to Taj has been long overdue. I had tried to eat there on a few occasions. Once I stopped by with some friends, but it turned out they were closed. Then another time, but they were not open until noon and we were ready to eat at 11am. So when I was in the neighborhood with my friend V deciding on where to eat a few weeks ago, I thought we could finally give Taj a try.

It's in the alley behind Zhong Xiao E. Road, not too far from the Dun Hua Eslite or San Want Hotel. Once you find it, you can browse the specials on their sign outside. 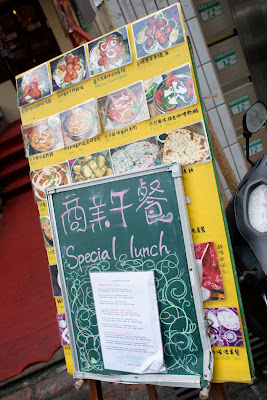 The English and Chinese menu is full of pictures and has a range of appetizers, curries and tandoor items. But while browsing the menu in detail, a lot of things that I've grown to love were crossed out or unavailable- eggplant curry, okra curry, mango lassi. There's also a few lunch sets available (NT$150-$250), which come with yoghurt, sago ki kheer and choice of naan or rice. 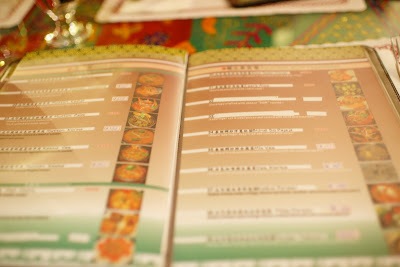 The space is roomy with some decorative elements with some touches that could make it a nice date night place. 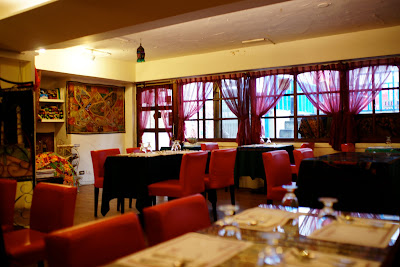 While it would be easier (and more cost efficient) to order a set lunch when dining alone, I had the chance to try both the ala carte curry and the set curry and it was a world of difference.

If I could make a suggestion- don't order the lunch set curry- it curry was more watery and the meat seemed tougher/smaller cuts. Between the four of us friends, the ala carte curry was finished, but the chicken and mutton curries sat and no one wanted to take them home afterwards. It's too bad they don't make a more equal quality of curry to match their regular offerings, but I guess they can't at that price point? 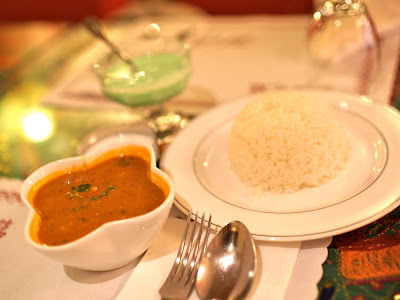 Instead opt for their hearty tandoori chicken which came with decent sized pieces and was perfectly grilled. 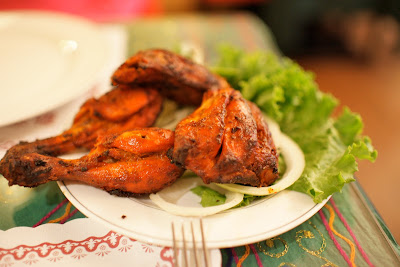 The garlic naan was fantastic and one of the best parts of the meal. Hot, chewy and garlicky. 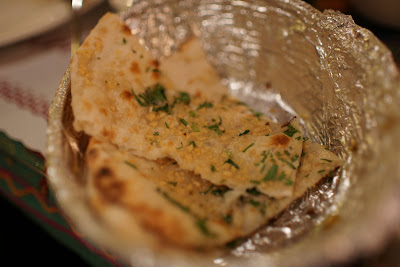 While I mentioned to the waiter I usually favored chicken tikka masala, he suggested the butter chicken. While the curry had a nice creamy, spicy flavor and tender chunks of chicken, I still missed the slight sweetness of the tikka masala. 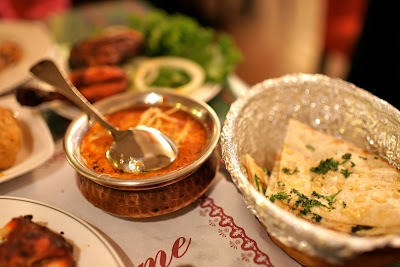 My friend who came a little later added a spinach curry to our order. I was surprised (and not happy) to taste a strong bitterness in the spices that were used for the spinach curry. I couldn't handle it and had never tasted anything like that before in other Indian spinach curries I've tasted, but my friend was okay with it. 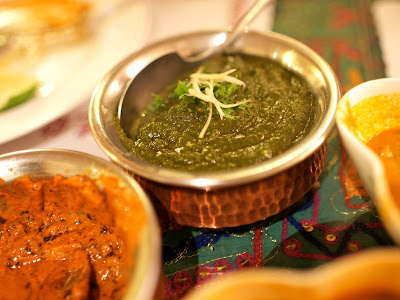 The samosas were also disappointing. While crunchy on the outside, they were quite dry on the inside, which intensified the spiciness. 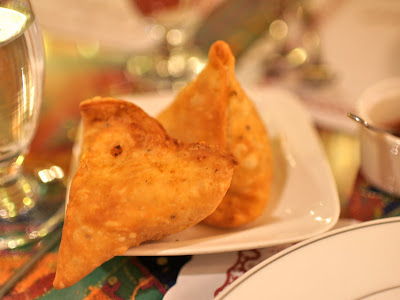 Combined with the also dry skin of the samosa, I wouldn't order it again. 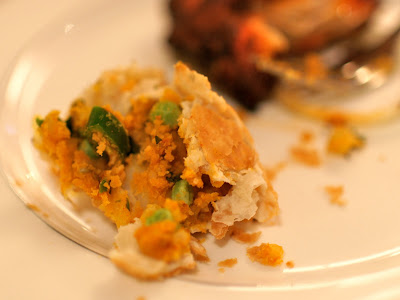 I was bummed I didn't have a better overall experience at Taj. Have any readers been before- and what did you order?

I might go back and try the flavors of some of the other curries, like my standby chicken tikka masala, but I was hoping that I'd discover something new to have love-at-first-taste with. I really wanted to find a closer go-to Indian restaurant in the DaAn or Xinyi district since my other experiences have been inconsistent, or the restaurants that have been great, like Saffron, are too far away. For now, I'll just have to settle for fast food mall joint Indian Palace.
Posted by joanh at 10:52 AM

Email ThisBlogThis!Share to TwitterShare to FacebookShare to Pinterest
Labels: $$ depends on what you eat, area- Da An, area- MRT zhongxiao/dunhua, indian

hey thats awesome , i got to know that TAj does exist in here, as an Indian i am proud that my county makes all the people happy irrespective of creed and colour....

Your photos are pretty! Too bad the food was disappointing.

I ate here the other day with a friend and to be honest it was the most disgusting indian food I have ever eaten in my entire life. So much that the thought of any other Indian food makes me want to puke. I used to love Indian food, and now it just makes me depressed.

kirbie: yeah. i was bummed, but the camera makes the pictures look so good!

anonymous: thanks for sharing... if we didn't order the tandoori chicken, i would definitely write off this place. but there is decent Indian food in Taipei!! give Saffron a try if you are desperate

I don't remember seeing any reviews for Kunming. They have a website:
http://kunming-islamic.myweb.hinet.net/

I think Kunming is a little gem of a place to eat. Really nice food. You have to try it.

I went here today for the first and last time. I feel compelled to leave this comment so other people don't waste their money. This was the WORST meal I've eaten in Taiwan... perhaps my entire life. It was almost inedible. We ordered the chicken tikka achari and it was so salty, I swear my insides felt like they were being kippered. Our chickpea saag dish managed the truly astonishing feat of being too salty and bland at the same time (the spinach was too salty, the chickpeas were mushy and flavorless). It was expensive, too. How they manage to stay in business in an area with high rents is beyond me.

wow great i have read many articles about this topic and everytime i learn something new i dont think it will ever stop always new info , Thanks for all of your hard work!

Look… here I am I have tried out things in the same manner as you described and guess what!!! I have been successful in taking up the challenge and fulfilling the endeavor finally!!! There cannot be anything better than this.

I would like to visit this place thanks a lot for sharing the pics of this restaurant.

I am surprised to see such a variety of diets in taipei. It looks like a food heaven.

It s a topic challenging for discussions always. Nice issues you used for argumentation

Hello,
This is an amazing blog post here.... Keep posting. Thanks!

Thank You a ton for writing such a wonderful piece of information. Keep sharing such ideas in the future as well. This was actually what I was looking for, and I am glad to came here! Thanks for sharing the such information with us.

I think location has moved. Eating here now and enjoying it. Place is packed.

The restaurant has moved