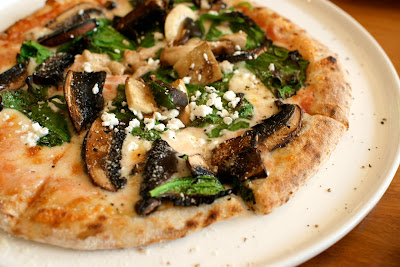 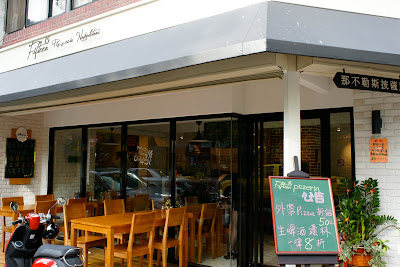 I think for this post, I'm going to let the pizzas, I mean the pictures do the talking. 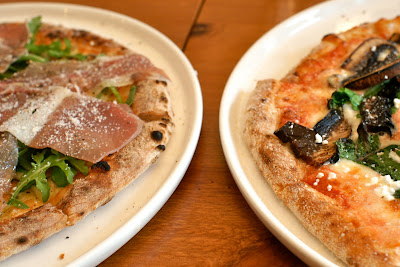 Thanks to reader Gil for giving me the heads up on this tucked away new pizzeria, just opened in October. It's actually on the same alley as my favorite Shan Xi Dao Xiao Mian place, near the Heping and Fuxing intersection. 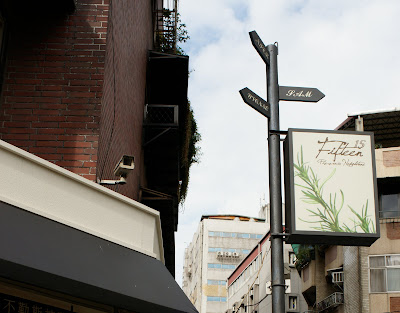 Why the name Fifteen? Apparently, they are Jamie Oliver fans and the name is a bit of an homage to that (it's the name of his restaurant in London). And if you sit at one of their barstool seats, you'll have a front row seat to some pizza making action just as if you were watching your favorite Food Networks show. Travel and Living show for those of you in Taipei. 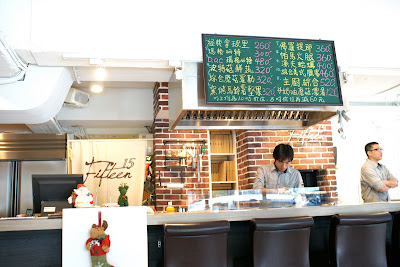 Fresh pizza dough gets flattened and topped with selections like prosciutto and arugula, clams and garlic or pesto and mushrooms, and of course mozzarella and parmasan cheese. 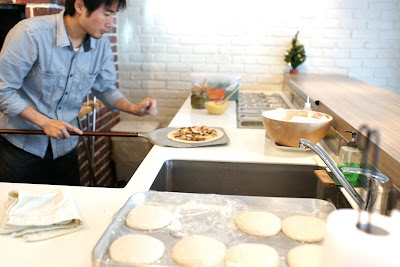 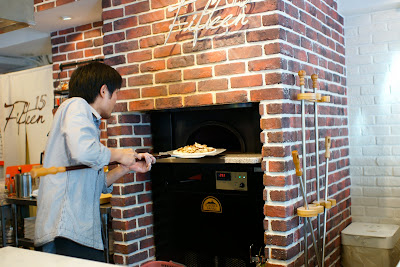 After being baked in the stone brick oven, the pizzas come to our table surprisingly quickly. 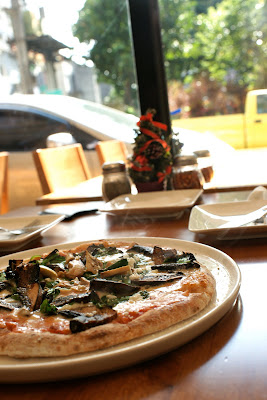 The space is not large, but has a few window-side tables as well as tables outside which look right out to the adjacent park. It doesn't seem tableready for groups larger than 4, which is too bad because their pizzas are the perfect kind to order a few different kinds to share. 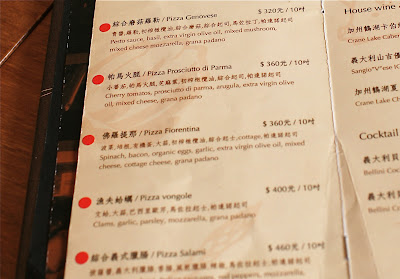 The menu right now only has pizzas and a soup of the day (despite the first page of the menu having appetizers), but there are a range of gourmet toppings you can choose from. From the traditional mozzarella and basil to the more unusual include Pizza Cavolfiore (cauliflower), Pizza Patata (sliced roasted potato) or Pizza Fiorentina (spinach, bacon, eggs) in the NT$300 plus range. The prices on the menu are for the 10 inch, but ordering the 8 inch saves you NT$60/pizza.

We got the Pizza Portobello Mushroom (NT$260 for 8") which chose because it had pizza sauce (only the ones listed with having sauce have sauce, otherwise, they just come with cheese and toppings) which definitely on the light side. But the toppings were fresh and plentiful and the mushrooms retained a juicy flavor. 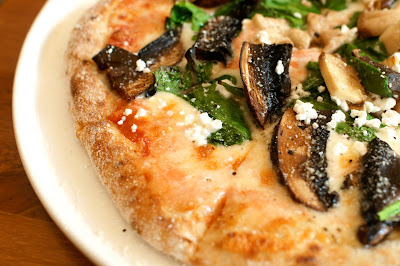 While we were enjoying our slices, the Pizza Prosciutto di Parma (NT$300 for 8 inch) came. Just say the word prosciutto and I'll drool, not to mention that it also came with the perfect partner, a spicy arugula (which is really hard to find in supermarkets here!) 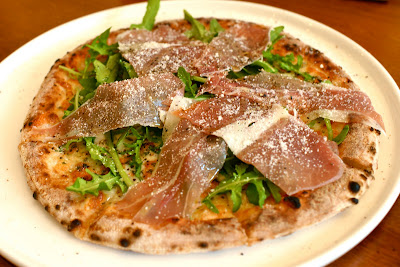 The pizza was dusted with a tad too much salt as the prosciutto is already cured, but alternating a bite with the springy crust took care of it. The prosciutto was velvety and softened a bit with the heat of the pizza. 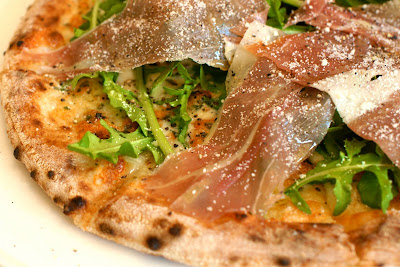 My friend and I had intended to just have a bit of each and save the leftovers for other friends, but we ended up eating almost the entirety of the two 8 inch pizzas between us. The crusts are soft and chewy and while the base of pizza is thin, it's not crispy, like you'd find at Alleycats. The pizza reminds me of Primo Trattoria, especially with the Fiorentina being available at both places, but Fifteen seems like a more casual and cozy hangout.

Stuffed and happy, I got a Pizza Genovese to-go, which has pesto sauce, mixed mushrooms and basil. I discovered that to-go pizzas get an additional 20 percent off, which is perfect because it saves you the sit-in 10% service fee and then you save a little extra. 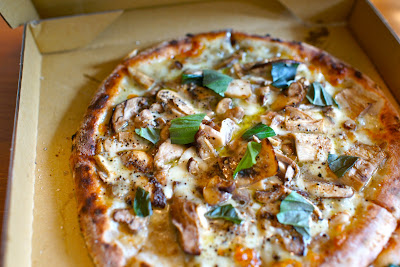 Definitely give Fifteen Pizza a try- it is a bit unusual in that alley of Chinese eateries, and they said business has been so-so after their strong opening. I only wish it was a bit closer to my neighborhood, but it will give me an excuse to wander in that direction.

I got a text today saying they'll have various promos on the 15th of each month, like buy one, get a smaller size free. I did want to give the clam pizza a try...

Don't forget to vote for your favorite restaurants in the BEST OF TAIPEI READERS' CHOICE POLL!! Only a few weeks to go and I need y'all to chip in!
Posted by joanh at 7:50 PM

I stopped by Fifteen for lunch today and I unfortunately did not like their pizza prosciutto di parma. While I did like the first bites, I felt a bit overwhelmed by the chewy crust as I went towards the edges. Somewhere along the line, it cross the line between delicate and bland, and I felt a little robbed when the bill rang up to 330 NT for my food.

But I treated myself to some uni at sashimiya for dinner to make up :)

daniel: sorry you didn't like it. i like the chewy crust and the style/portion is more gourmet than delivery. but i'm glad you got some uni. yum!

wow those pizza looks great! stumbled upon your blog when i was planning my TPE food trip! haha. great stuff! planning to try ice monster today - just found out its not too far from where i live!

viv: thanks for commenting.. mm ice monster. hope you'll share what you eat on your food trip!

i will say i'm a sucker for arugula on a pizza. there was a small pie/gourmet type place in the lehigh valley that i used to get a pizza with arugula from often.

brian: yes, arugula on pizza anyday!! mmmm. as for the salt, maybe the chef was a bit too enthusiastic that day :)

My lady friend and I were looking for a place that was open late enough to accommodate us before our late night plans on Christmas Eve and she stumbled on to your Blog. It was right in the area of the bar we were going to so we decided to give it a try.

We mentioned that we found the place via your blog and the server smiled and said that we were the 5th people to say that... that very same day.

So you are definitely impacting these places for the better.

Yeah - I like fifteen - it is conveniently just down the road from where I live - they said they will start to serve appetizers soon. I like the staff they are always friendly. We also arranged a big party there and they were very accomodating and helped with the menu and starters. I agree, its a place to recommend.

penelopesa: wow! thank you so much for sharing. i was smiling the whole day after your comment... i'm glad the blog helps people find places like Fifteen, that you might not otherwise (and that people are mentioning it to the restaurants!)

durbanbay: thanks for your comment. looking forward to their appetizers! :)

I haven't tried the pizza at the following link yet but it looks really good.
http://www.maryjanepizza.com/

Pizzas look great. A pity they don't offer any healthy salads or veggies to balance the cheese and carbohydrates. Silly of them not to.

I tried their pizza tonight. The mushroom was better than the margherita. Margherita was very average with the tomato being too acidic.

The worst thing about the place was the huge poster hanging by the bar. Of a girl bent over looking into a fridge. Completely offensive and inappropriate for a restaurant that kids would eat at.

I wanted to say something about it, but the guys working there didn't even ask my friend and me if we liked the pizzas, so I didn't bother offering my opinions on the decor.

Probably won't go back to this place again.

I went to Fifteen today with some friends for dinner. The place was packed so we were lucky to have a reservation. We were seated at the bar and the food was prepared rght in front of us. The pizzas were really good, although I feel they are a little bit expensive compared to other pizza places in Taipei.
The poster that someone commented about is actually a commercial for a German beer, it says something along the line of "That's why the beer is always on the bottom of the fridge". The girl's naked ass really doesn't fit the ambiente, I agree on that one.

delicious, delicious, delicious!! i never write a comment about a food-place, but I'm so impressed that I have to do it this time! I'm from Germany and we have a lot of good italian restaurants back home, that's why I'm kind of difficult when it comes to pizza. i ate about three times at Alley Cats Pizza and I found it not that special. I don't know why it is supposed to be the best pizza in taipei!?
FIFTEEN PIZZERIA NAPOLETANA is waaaaay better! We had the Italian salami sausage pizza. awesome!! It was not cheap, but i will go back, thats for damn sure!! :)

This looks great, what a lovely photo. Thanks for commenting on my blog, I'm glad it's brought me to discover yours!