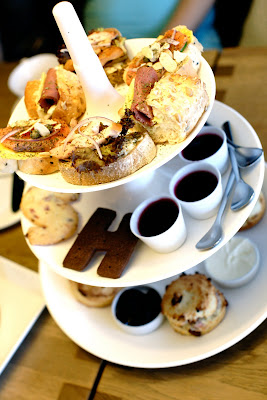 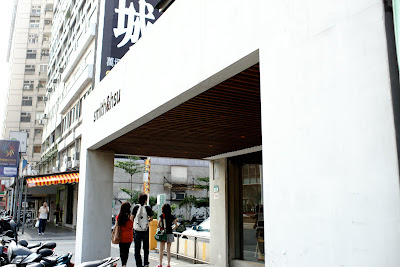 If you've never had a buttery scone, then you need to book your next afternoon tea date at Smith and Hsu. For years, I equated the word "scone" to "dry biscuit" because of my past experiences in the states at American coffee shops. Make that "rock hard, super dry biscuit." But Smith and Hsu makes their scones like warm biscuits and even gives you some fancy Devonshire clotted cream and farm jam to spread in its luscious center. 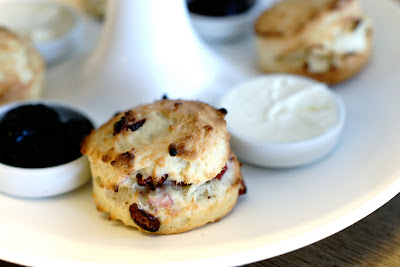 The shop is the opposite of what you might expect to a tea shop- modern and glossy, rather than frilly faux Euro and old fashioned like the chain Rose House. The founder had "a passion for (both) Chinese and English tea culture" and so you can find a wide variety of both here. Often times when I passed by Smith and Hsu, I wasn't even sure that it was a place to eat as most of the shop is occupied by tea sets and tea displays. 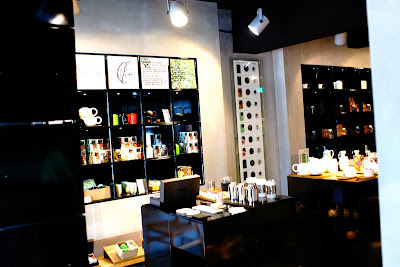 But lucky for me, a girlfriend had picked it for a place to meet up for a late lunch and I got a chance to finally check it out. There are only about 10 or so seats at the ZhongXiao location, so be sure to call ahead if you want to ensure you have a table- our neighboring tables were full most of the afternoon. 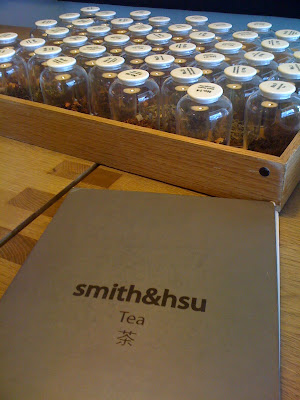 For the casual tea drinker like me, the dizzying selections of teas to choose from can be a bit overwhelming. As are the tray of bottled tea leaves that they set on the table for you to browse. I was unsure if we were supposed to open them up and smell them or just admire them and my friends did not really touch the tray, so it would have helped if the servers explained a little bit of what to do. 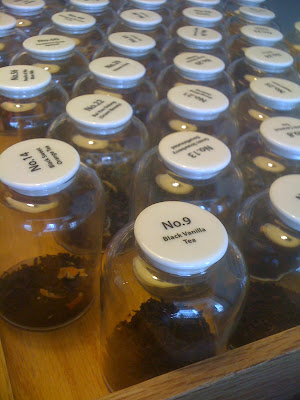 By the pot, there's black tea, green tea, scented teas, oolong tea, pu erh and white tea, herbal tea, milk tea and fruit teas with about 5 to 10 choices in each category (NT$180- NT$690). The most expensive is for Green Sencha Fukujyu tea at NT$800 and I wonder if the average tea drinker would be able to tell the difference between a pot of that and whatever the local Japanese restaurant gives you.

The food part of the English and Chinese menu has mostly sandwiches, salad (NT$160-220) and desserts, but everyone's table had a tiered afternoon tea set (and camera toting customers taking photos of their food and themselves enjoying their food). I was asked not to take photos when I was walking on the store side, so I starting taking photos with my iphone, but once I noticed they didn't seem to care about everyone else taking photos of the food, I brought the DSLR back out. 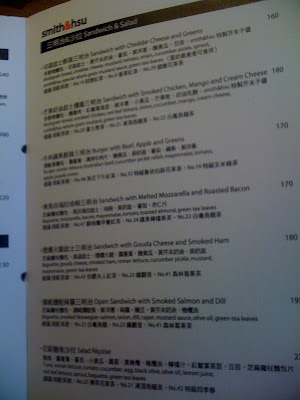 Smith and Hsu offers three kinds of afternoon tea sets- a Cream Tea set (NT$240) which has 2 scones, cream, jam and one cup of tea; an English Afternoon tea set (NT$990) which has 4 scones, Devonshire clotted cream, 2 jams, 4 tea jellies, 2 cakes, cookies, six assorted finger sandwiches and 2 pots of tea; or the Sweeties set (NT$220) which is one cake and one cup of tea.

Our hungry table of three decided to get the English Afternoon tea set to share- at which point they ask you to choose 2 jams (blueberry, raspberry, honey or lemon curd (I think that's what the last one is. In Chinese, they said lemon and egg yolks)), 2 desserts from the counter and the tea that you'd like. I got a cup of Kir Royal Fruit Ice Tea, made with Kir Royal tea, lemon and apples, but tasted like it had some berries infused in it. 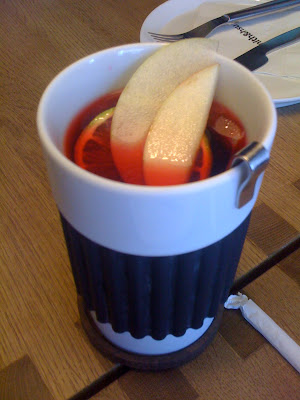 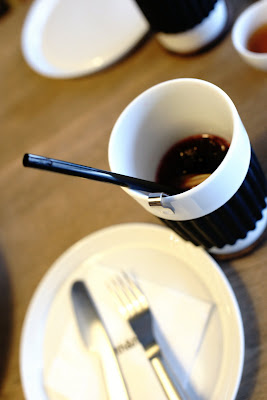 The best thing about the English Afternoon tea set is definitely the scones- I enjoyed both the raspberry and blueberry farm jams. The clotted cream was like a whipped butter, not like cream cheese like I expected. The inside of the scone is moist inside and golden and crispy on the outside. I ate one and half of another a little later. If you order just the scones, it's NT$130, which is a pricey NT$65 per scone, but I've paid for desserts/bagels/muffins that price that were far less tasty. 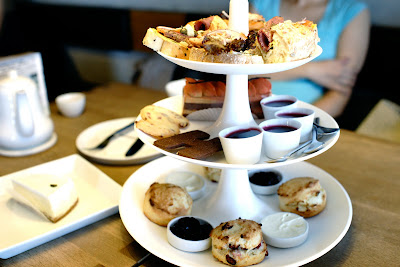 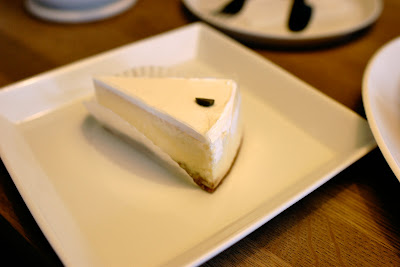 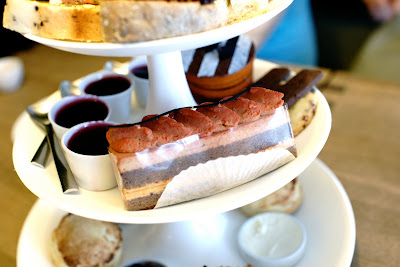 My favorite of the finger sandwiches was the smoked chicken, which had a layer of hidden mango and cream cheese underneath, giving it a surprise creamy and sweet flavor. I'll eat smoked salmon, but I'm not crazy about it, it was decent. The least fave was the roast beef because the meat was lost in the huge baguette. 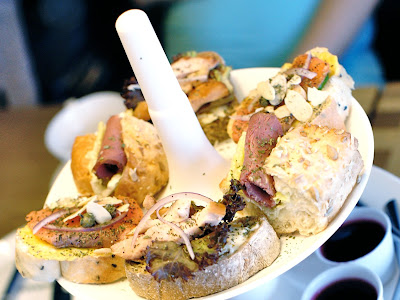 We also didn't like the jellies which tasted a bit medicinal (think cough syrup) rather than tasting like it was made from tea.

One neat thing about the menu is that they recommend tea pairings with the sandwiches, and though it's in Chinese, you can reference it by number. 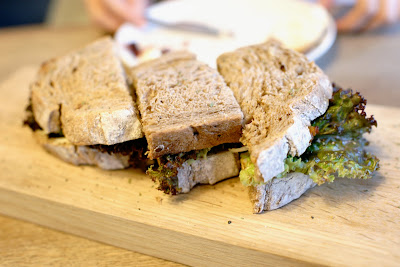 I'd definitely recommend Smith and Hsu as a place for a light lunch or splurge for afternoon tea- they had some other sandwiches (gouda cheese and smoked ham, melted mozzarella and roasted bacon) that sounded good too.

Wow this looks amazing, here in South Africa where I am from, this is conceived as a real treat! You are a lucky person!

oooh looks fancy smancy...i like it :)
btw, i went back to saveurs for dinner this time! had some interesting food...a tomato mozzarella pie that had marinated shrimp with pesto. ah, i'm gonna miss taiwan so much!

school luch box: it's a treat here too! i was surprised to find something like this in taipei

the thirsty pig: thank you!!

lin: i have yet to go to saveurs for dinner. looked delish! isn't it amazing how much there is to eat here?

I just returned to blogger/foodblogs and your blog has gotten even more awesome! Props always. And I wish I were in Taipei.

Great photos! I LOVE this place.

We were in Taipei last week (on holiday from LA) and tried to do a walk-in at the Zhongxiao store on a random afternoon but was told the next available table was after 8pm...needless to say the wife was really bummed. I guess next time we're in town!

Just went there for a light lunch. The ham and gouda sandwich was awesome and the scones were one of the best I have ever eaten!!! Thank you for being such a good guide for any foodie in Taipei!

I tried the scone and tea. Both of them tasted great. I am lucky to get in because my friend made a reservation first. It's a lovely place.

This place looks interesting, i'm going to have to check it out. It reminds me of royal-T in LA.

I'm a regular visitor at the the Minsheng East Road store; twice a week for the last nine months. I would strongly recommend the Minsheng East store as being quieter and far less frequented. The atmosphere is consistently calm and quiet, a real haven in the business district.

I love afternoon tea! The food here looks to pretty to eat. :)

taufulou: it's nice.. haven't been in awhile

Sera: thanks so much!!! you haven't been writing on your blog!!

The Jaded Tourist: thanks for commenting!

Jeff Huang: yes the zhongxiao store is so tiny it tends to fill up fast.. i think there's another one nearby in one of the Hankyu mall across the street

Aki: thanks for commenting! i'm glad you enjoyed it! i love their scones

Sunny: hi Sunny! thanks for commenting!

Johnny: i've always heard about Royal T in LA but have never been. I think Royal T is more hipster... Smith and Hsu is more modern chic

Fortigurn: is the minsheng branch roomier? it's nice if it's quiet